An important part of the sport of athletics (including cross-country running) is the coverage given by the Press.   We already have profiles of athletics journalists and reporters such as Doug Gillon, Sandy Sutherland, Bill Melville and George Sutherland on the website.   But long before that the coverage was of a totally different order.   Where editors were at one point in the 1980’s only concentrating on three or four sports, a century before that there were several weekly papers dealing only with sporting matters.   One of the best known of these was ‘The Scottish Referee’.   The title and associated information is above.   It covered all of the outdoor sports: football, rugby, cricket and, most important to us, track and field athletics, road running and cross-country running.  In contradiction of the headline, it also covered such as snooker, billiards, draughts,  chess and whist.  There were only four pages but it did an excellent job.    It ran from 1888 to the start of the War in 1914.

The story started on Thursday, 1st November, 1888, when the following notice appeared in the Glasgow Evening Post:

A WEEKLY RECORD AND REVIEW OF

the First Issue of a New Athletic Paper under

The object of the promotion is to supply the Public with a Thoroughly Reliable and Unbiased Record and Review of all the  Recreation and Sports for which Scotland is famed; and for this purpose they have retained, in the different departments the services of many of the ablest Athletic Writers, and have been promised the support of a large contingent of the best exponents of the various Recreations.

The Scottish Referee will comprise New, Novel and Alternative Features; and all the facilities of the Establishment which has been the centre of Athletics for the past fifteen years will be enabled to make the Paper varied, interesting and authoritative.

The paper will be brightly and simply written; and while Persons and Events will be firmly criticised and commented upon, no malice or  animus  will be allowed to sully its pages.   Sensibility and personal abuse will be rigidly excluded; and fairness,  a free field, and no favour will be the dominant policy of the paper.

The utmost freedom will be given for the discussion, in a gentlemanly manner, of al questions of current, and permanent interest to the Athletic World.

Every effort, in fact, will be made to prevent the healthy recreation of the rising generation from becoming  associated with the  debasing recrimination and professional spleen which of late years been imported into many forms of athletics.

In form, style and tone the Scottish Referee will be different from any paper published in Scotland, and will contain more reading than the ordinary penny journals.

A WEEKLY RECORD AND REVIEW OF

It did appear as promised and in the first ever edition, they stated their aims and objectives in a slightly longer form as follows:-

The motive and object of The Scottish Referee may be stated in a few sentences.   Within recent years, athletics, football, and other outdoor recreations have assumed an importance in the general affairs of life which a decade ago was undreamt of.   Unfortunately, with this growth have also developed some features of a less desirable character – unbridled partisanship, unfriendliness, quasi-professionalism, roughness, in many instances ferocity and mere brute force – until now there is a very grave danger of the manly exercises on which the future physical superiority of the nation depends being banned because of the evils with which they are being associated.   Full and impartial publicity is the only remedy for these and other evils.   Hitherto – in Scotland, at least – journals devoted to athletics (as invariably is the case in the earlier years of all movements) have been too malignly influenced by the passions and interests of contending parties and interests – they have been identified too closely with the rivalries and controversies of reckless combatants, and have in consequence tended to incite rather than diminish the bad social and personal feelings, the existence of which all true lovers of healthy recreation deplore.   Recreation for recreation’s sake will be the policy of the Referee.   Our purpose is not only to provide a free and unbiassed channel for recording the chief events in the world of recreation; we shall also endeavour, by unprejudiced comment, honest criticism and direct discountenance of all unfair tactics and foul play, to purge the more popular pastimes of the passions which so easily beset them.   To attain our object we cordially invite the assistance of secretaries of clubs and associations, and of all others interested in the welfare and physical health of the rising generation.-

That was the statement of editorial policy and some of it bears comment.   Look at this section:

“Journals devoted to athletics (as invariably is the case in the earlier years of all movements) have been too malignly influenced by the passions and interests of contending parties and interests – they have been identified too closely with the rivalries and controversies of reckless combatants,”      The year was 1888, the amateur athletic movement had burgeoned and pretty well taken the imagination by storm after the establishment of Clydesdale Harriers in May 1885.   At least one of the sporting periodicals – The Scottish Umpire – had welcomed the arrival of the new club and had reported and commented on just about every aspect of the club’s activities since then.   Could this have been the direction in which the section quoted was aimed?

There were lots of regular features in the Referee but it should be remembered that the use of photographs was severely limited simply because the technology did not exist at that time.   The result was that there were many illustrations which were hand drawn to start with.   eg the first feature mentioned below.   They certainly did score over their rivals, certainly in the beginning, by the quality and number of illustrations.

1892 was an important year in the development of the paper – it produced its first regular Friday edition in April.   The previous week there had been a Special Edition on the Thursday dealing with the Scotland v England international to be played at Ibrox Park (for the teams see the Groups page) and then on 8th April came the new edition of the paper.   Note the subtle change in its masthead.

The changes hadn’t stopped there – although the portraits kept coming the title of The Portrait Gallery disappeared, and the blocks identifying the various sports commentaries by Ben Bow and the rest ceased to appear too.   Then colour came upon the scene – from the start of January, 1893, the paper was printed on pink paper.   It maybe made it stand out from the others on the news stands but there was a new look.

Photographs had to come and they did, beginning at the end of 1908 and there were regular series of them: Ben Bow had a series of portraits and profiles, the Portrait Gallery returned  but with photographs, football and other sports were now illustrated with photos rather than with drawings and there were new pages covering the theatre with photographic studies of the leading men and women.  The occasional news featured too – eg a large picture and account of the death of the King was there.

The Referee continued to develop until the War started in 1914.  It had become a six page paper most of the time but for this final issue it was back to four.   It was a rather sad Cap and Bells commentary in Tout le Monde for issue number 2,590 and the big cartoon below was the centrepiece, maybe ‘drawing’ would be better because as Dudley Moore said in another context, he couldn’t see the joke. 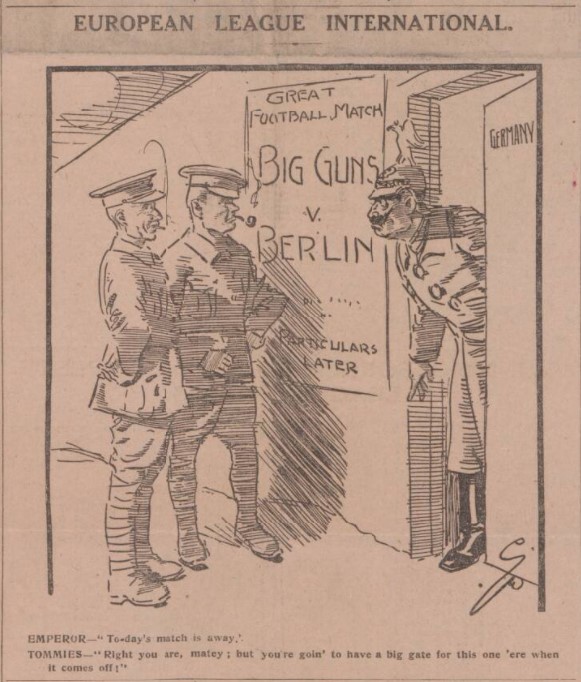 A sports paper it had lasted for over 25 years and it had taken a War to stop it.   Latterly it had included some content on entertainment (the theatres in Glasgow were numerous) and other news which was not part of the initial intention but it was still a popular and detailed publication.

We will cover all the various aspects of the paper as the weeks go by meanwhile, we can have a look at the last issue by following the link below, the others are all pictorial extracts.

The Runners     More Runners    Some more general portraits     The ‘byelines’    .The Advertisements     The Columnists   Some Groups   Photographs

You can read much more about the publication at this link: