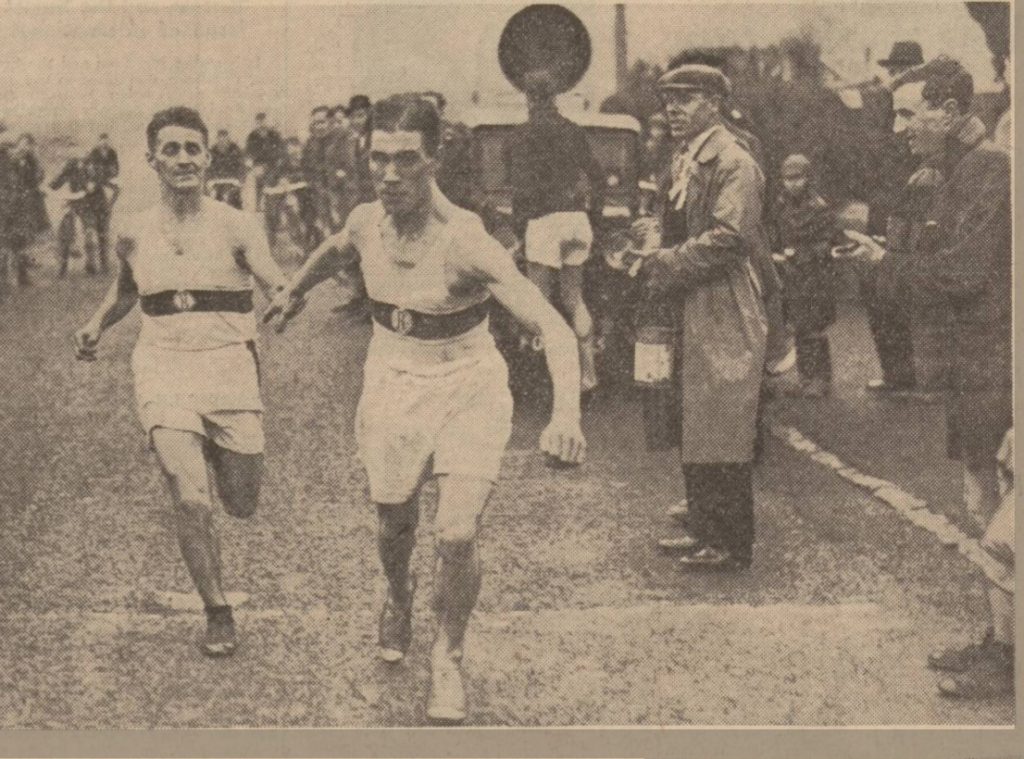 The Perth to Kirkcaldy was a popular 36 miles road relay race held in the 1930’s which attracted athletes from the west of Scotland as well as from the east.   The Edinburgh to Glasgow sponsored by the ‘News of the World’ had started in 1930 and was run over 8 stages; the district cross-country relays were run over 4 stages and other club organised events were also run over 4 stages.  This one, with the first running being on the first Saturday in April in 1934, was over 6 stages.   It’s not too much of a strectch of the imagination to think that some clubs used it as a run-in to the Edinburgh to Glasgow, given that the dates of the eight stager in the 30’s were 4th April 1936, 3rd April 1937, 9th April 1938 and 22nd April 1939.   It was first run on the first Saturday in April, 1934, in dreadful weather conditions.   The report from the ‘Scotsman’ on the following Monday read:

Eight clubs contested the first Perth to Kirkcaldy road relay race of 36 miles on Saturday, under most inclement weather conditions.   Lord Provost Hunter started the first relay of runners from Perth in gusts of whirling sleet and snow, with treacherous underfoot conditions.   Within the first two miles the falling snow had increased in intensity and when the sector from Freuchie to Coaltown of Balgonie was entered upon the road was fully four inches deep in snow and slush.

A mishap occurred to the leader at this stage, D Gowans of Dundee Thistle.   With a lead of over a furlong, Gowans, unaccompanied by any stewards, had his own way to find to the next stage, and being strange to the district he took a wrong turning.   The second runner, W McGregor, Kirkcaldy YMCA, also took a wrong route but managed to correct his mistake and get on to the right road again.

The non-arrival of Gowans at Coaltown of Balgonie occasioned much concern and a conveyance was dispatched in search of him.   He was ultimately found in an exhausted condition, having run almost nine instead of six miles.   After attention in a nearby cottage, the Dundee runner was taken to Kirkcaldy hospital where he was detained overnight  to recover from the results of exhaustion and exposure.   Over the last stage, McIntosh had an easy task to win for Edinburgh Northern.   The unfortunate mishap to Dundee Thistle detracted somewhat from the merit of Northern’s win, but their runners deserved commendation for the earnest and unrelenting manner in which they raced over each relay, to reduce a deficit of 2 mins 5 secs at six miles to a gain of 2 mins 23 secs at thirty six miles. 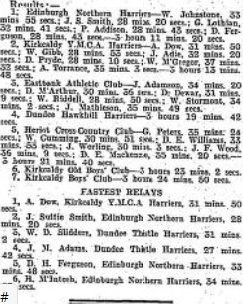 It was a pity that the first running of the race should coincide with a freak snow storm in April but even a quick look at the results will note the names of such quality athletes as Alex Dow, Suttie Smith , W Slidders and Peter Addison.   If we look at the field here and the result of the Edinburgh to Glasgow 8 man relay that year, the Dundee Thistle team had won that from Edinburgh Northern and Maryhill Harriers  with Gowans on the second stage for the Dundee team.   Both Dow and Suttie Smith ran for Scotland in the international meeting that year while Slidders ran the year before too.

In 1935,  the race had been brought back by a month and was run on 30th March.    The race had attracted a lot of attention locally and a silver trophy had been gifted by Sir Michael Nairn for the winning team.   He was of the Kirkcaldy linoleum manufacturing family and the cup would be known as the Nairn Cup.   The Courier had a fairly detailed preview of the race in their edition of March 30th.   Teams entered were

Edinburgh Northern Harriers – Colours : White with maroon and blue bands.   JS Smith, WA Ferguson, C Lothian, W Hinde, JP Laidlaw, H McIntosh.   Their achievements are too numerous to mention here, suffice to say they have gained every honour possible both for team and individuals.   There are four internationalists in this team, and it is considerably stronger than when had a lucky win in this race last year.   As they won the Scottish National cross-country championship, Edinburgh to Glasgow road relay race and the unofficial Scottish 10 miles relay championship this season, they will be all out to win this race too.

Dundee Thistle Harriers: Colours: Red trimmed with white.   A club that has been amongst the honours greatly in the last twenty years and have been just short of championship form being runners-up on two or three occasions.   Have won the Edinburgh to Glasgow Relay and were most unfortunate last year in this race when after establishing a winning lead, a runner went off the road.   A Team: T Coburn, P Addison, WS Slidders, D Whitecross, D Gowans, A Donnett;   B Team: C McDonald, D Thomson, F Suttie, J McKechnie, EH Wright, WW Howie.

Bellahouston Harriers (Glasgow):   Colours  Blue with pale blue St Andrew’s Cross.   This club is pretty well to the fore in the West of Scotland and should give a fairly good account of themselves.   This is a late entry but the team will definitely include Jacky Campbell, Scottish internationalist.

It is an interesting list of teams from the North East, the East, the Borders and the West of the country and all of the teams were putting forth their finest runners.   Would the race live up to the expectations of the promoters?   The picture at the top of the page shows the intensity of the effort the runners were putting in.   The enthusiasm of the spectators is evident too and the host of bicycles at the back presumably are for club supporters to follow the race.   So how was the race?

The report in the  ‘Scotsman’ was brief and to the point:

“Edinburgh Northern Harriers on Saturday won the second annual Perth to Kirkcaldy 36 miles road relay race for the Sir Michael Nairn Cup.  Twelve teams, each of six runners took part.    Northern’s victory completed a remarkable sequence of successes, the club having won every open event they have competed in this season.   The details:

Fastest relay times were accomplished by the following runners: last year’s best times are given in parentheses.

The third running of the race on 23rd March, 1936, was also well supported and the picture below is of the start. 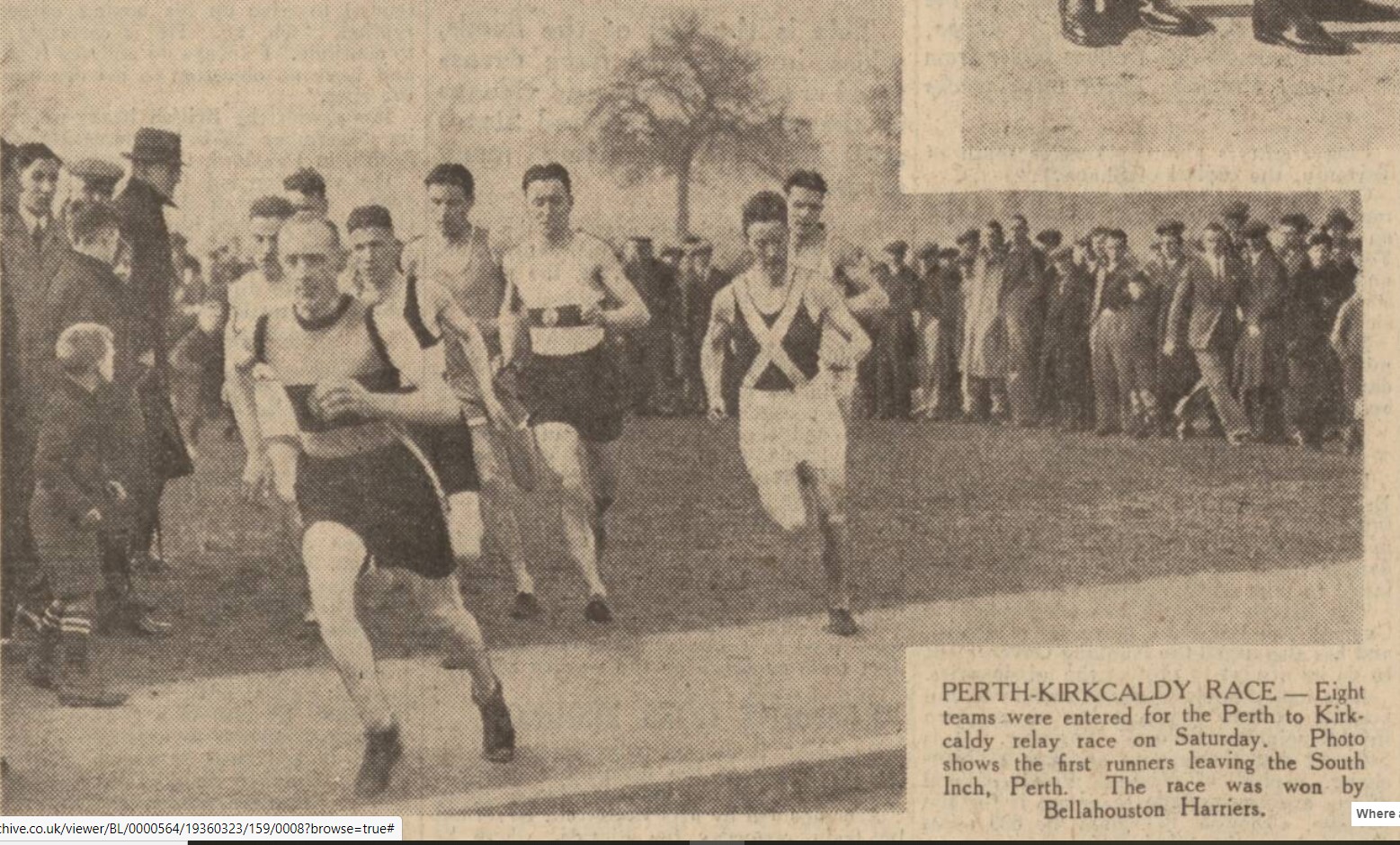 The race was a close one with two Glasgow clubs – Bellahouston and Plebeian Harriers – fighting out the finish.   The report in the ‘Courier’ read as follows:

In 1937  the race was held on 27th March and both Bellahouston and Plebeian were back for more of the same – Bellahouston wanting to win again, Plebeian hoping to gain revenge for the previous year’s defeat.   Both had good teams out to do battle with (principally) Edinburgh Northern, Edinburgh Southern, Dundee Thistle and Kirkcaldy YMCA.   The route was unchanged with change-over points at Aberargie (6 1/2 miles), Newburgh (5 5/12 miles), Auchtermuchty (5 1/4 miles), Freuchie (5 1/2 miles), Coaltown of Balgonie (6  5/12 miles), Esplanade, Kirkcaldy (6  3/4 miles).    The route can be seen on this representational map. 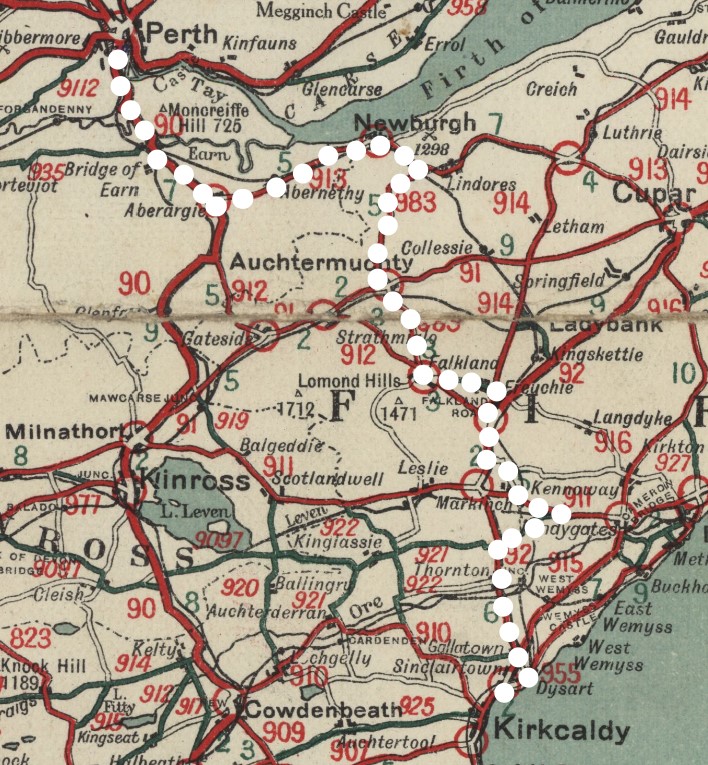 Although the report the previous year had a 5 yard victory for the boys from Bellahouston, the pre-race review this time said that it had been won by a single yard.   It all adds to the excitement. 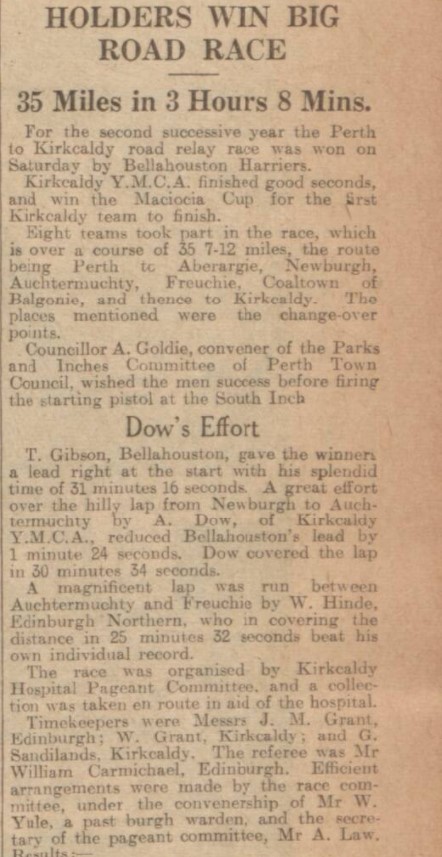 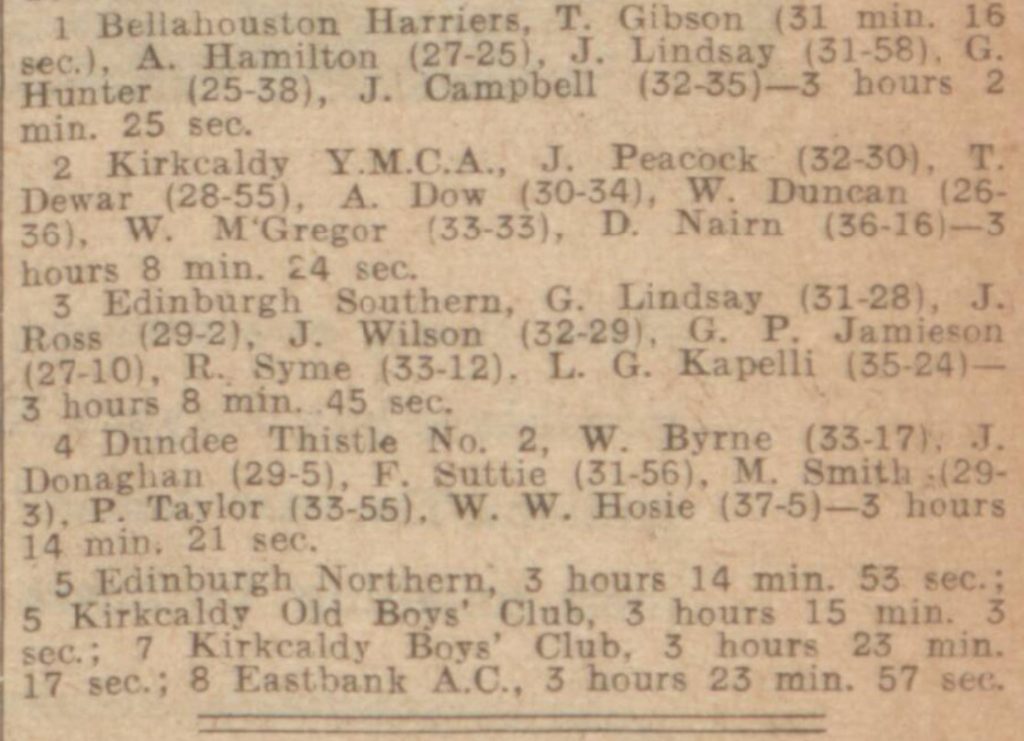 Any club or individual who wins a trophy twice, likes to go back to go for ‘three-in-a-row’ and Bellahouston Harriers had just that in Mind when they returned to Perth in March 1938.   The race was organised by the Kirkcaldy Hospital Pageant Commission and the race was part of the efforts to raise money for the hospital – a reminder that this was pre-NHS days and fund-raising was a necessary part of any such organisation.   The appearance of big name runners was a good selling point for the event locally.   Bellahouston had all the top men out for the event.   Like the Edinburgh to Glasgow relay, the winning club from the year before carried a special baton with a message from the Lord Provost of Perth to the Provost of Kirkcaldy.   The report read: 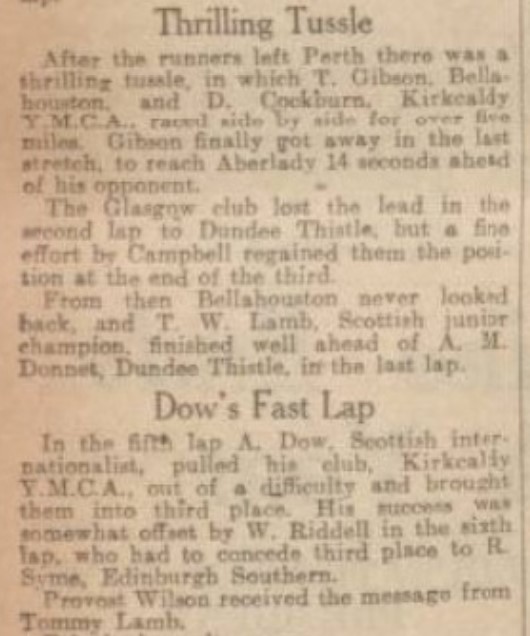 Bellahouston runners obviously liked Perth and they returned on 29th March 1939 for a fifth run in the race.   The photograph of two Edinburgh Northern runners below is another very good picture of all that the race entailed – determined runners, enthusiastic spectators and a road cleared by the local police – the race reports usually included a list of officials and the Chief of Police was usually mentioned and thanked for the traffic management for the event. 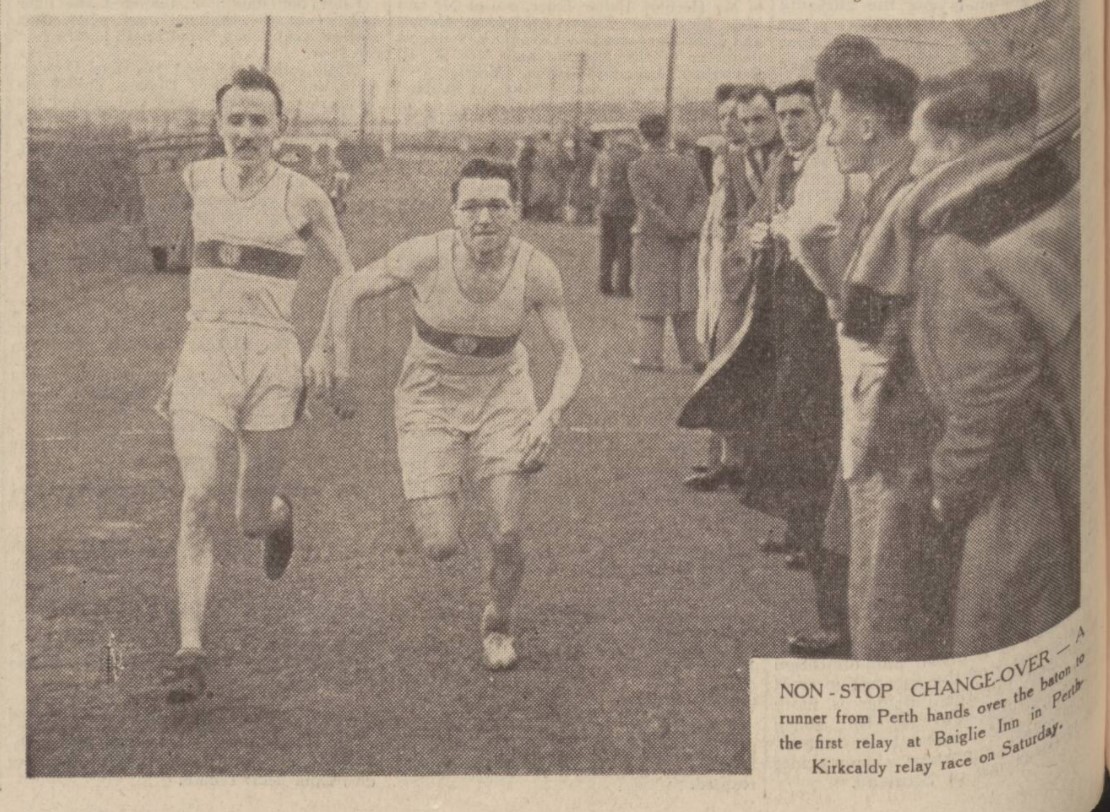 The headline from the ‘Courier’ tells the story. 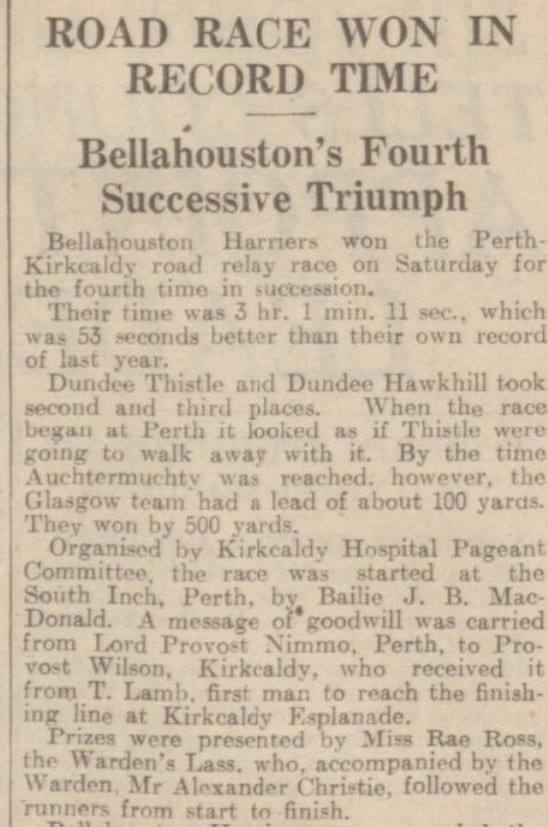 The opposition in what was to be the last race included both Edinburgh clubs and both top Dundee clubs.   The results are below and Bellahouston are to be congratulated on winning the race in four consecutive years.   Over the 5 years of their participation, they only used nine runners:   Jacky Campbell ran in all five as did Tommy Lamb (a junior in 1935) and G Hunter, Hamilton, Lumsden and Gibson ran three each, Austin ran in two and Lawson and Lindsay ran one. 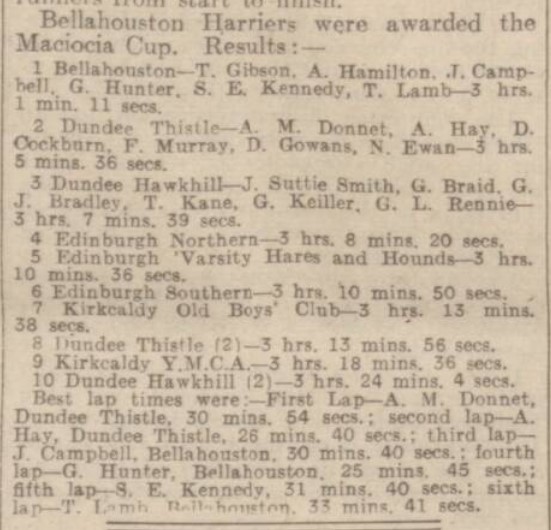 That was to be the last of the Perth to Dundee road relays – the War put a stop to it and it was never resurrected.   It was a pity that the only six-man road relay disappeared.  The Scottish national 6-man road relay did not appear until 1979 and it is a very popular event with many of the country’s best running talent turning out for their clubs.