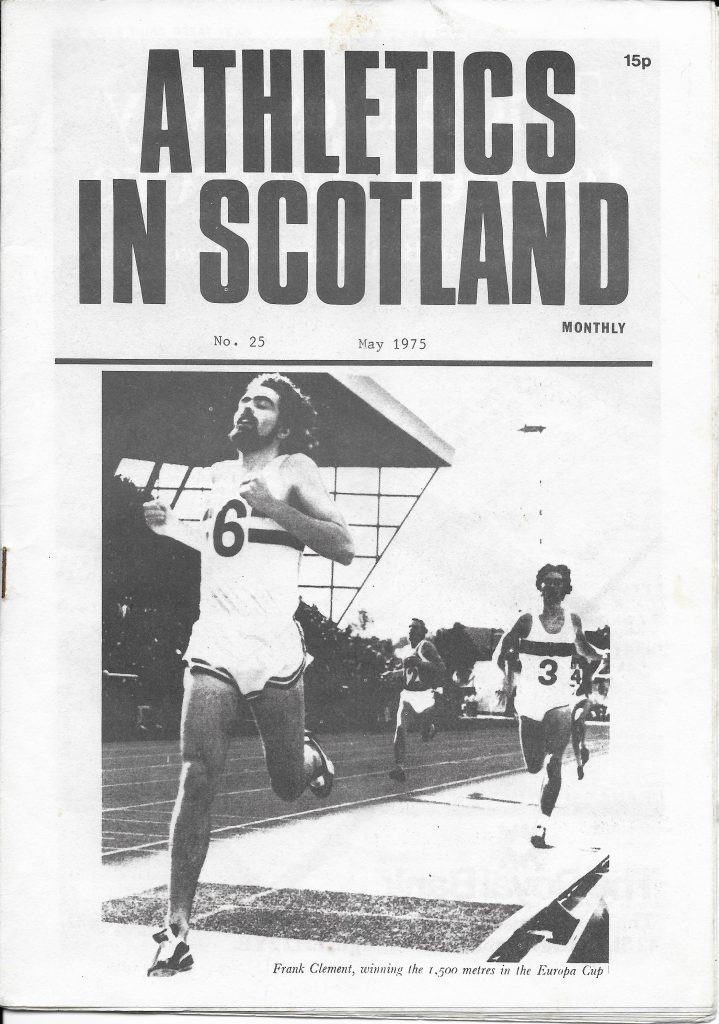 Athletics in Scotland was a very good magazine indeed.   It came out when it said it would, and combined journalism with reporting in a very good mix (not an easy thing to do).   And yet it is not remembered as ‘The Scots Athlete’ is or even as ‘Scotland’s Runner’ is.    Produced by George Sutherland in Edinburgh it sort of sneaked into the consciousness of the athletics public in Scotland.

One of the key points of the ‘Scots Athlete’ that George realised was key to its success, was the results service and profiles of top Scots athletes.   And he made sure that his magazines had as many results in them, in more detail than the Press did, as possible.   On a couple of occasions when he could not get the results of races such as the Midlands Championships, he actually apologised for the omission.   The profiles of such rising stars at the time as Paul Buxton and Peter Hoffman were of great interest.

Photographs are important to any magazine and Ben Bickerton, a professional photographer as well as a quality athlete from Shettleston Harriers provided many of the pictures that graced the front cover.   Later on he included photographs by Gordon Peter Duff and Graham MacDonald.

Good quality writers were also featured – James L Logan of Victoria Park who had written in Walter Ross’s magazines, Colin Shields, noted statistician and member of Greenock Glenpark Harriers and then Dumbarton AAC were among them.   You will have noted that although the magazine was based in Edinburgh, the men mentioned were from the West of the country.   Not only did he have writers from various parts of the country, his magazine covered track and field, road racing, cross country running and hill running.   Variety is the spice of athletics life.   Coaching was important and there were monthly coaching articles with line drawings by Frank Dick, National Coach.

Finally George’s magazine was peppered with advertising – the percentage of advertising in it was high.   It must have had results because the number of adverts increased over the months and years of its publication.    It really was an excellent production.

I have a small number to hand and will reproduce them to give an idea of just how good it was and the links are here below.

And what of George Sutherland himself?   Unlike many producers/editors his own picture never appeared in the magazine.   Nor was there a ‘From the Editor’   or ‘The Editor Speaks’ articles to give a clue about his own standpoint.   It was all about the sport with no opinion of his own  ever expressed as far as I could see.   Nor did he have an athletics pedigree that we could relate to – no one ever talked about their rivalry or races with him.   What was the man who was responsible for it like?     Peter Hoffmann sheds some light on these questions when he says:

“George lived at Durham Square Portobello Edinburgh round the corner from me. I seem to recall he printed the magazine in his attic at home. He was a lovely chap, tall, bespectacled and balding. He lived with his wife and two daughters. I was at their house on a few occasions mainly with EAC stalwart Dougie McLean who was friendly with George.   I helped to distribute and sell a few editions of the magazine. I may be wrong on this but George didn’t really seem to be around the athletics scene or community whatsoever so I’m slightly unsure of his motivation. One would have thought it would be for athletics and as an enthusiast but it may have been for other reasons too. Although I said earlier the venture may have simply run out of steam, thinking about it further I wonder whether his job and therefore home circumstances may have changed which had implications for the demise of the magazine. I mention him once or twice in my diaries.”

However you can read more about him at this link.