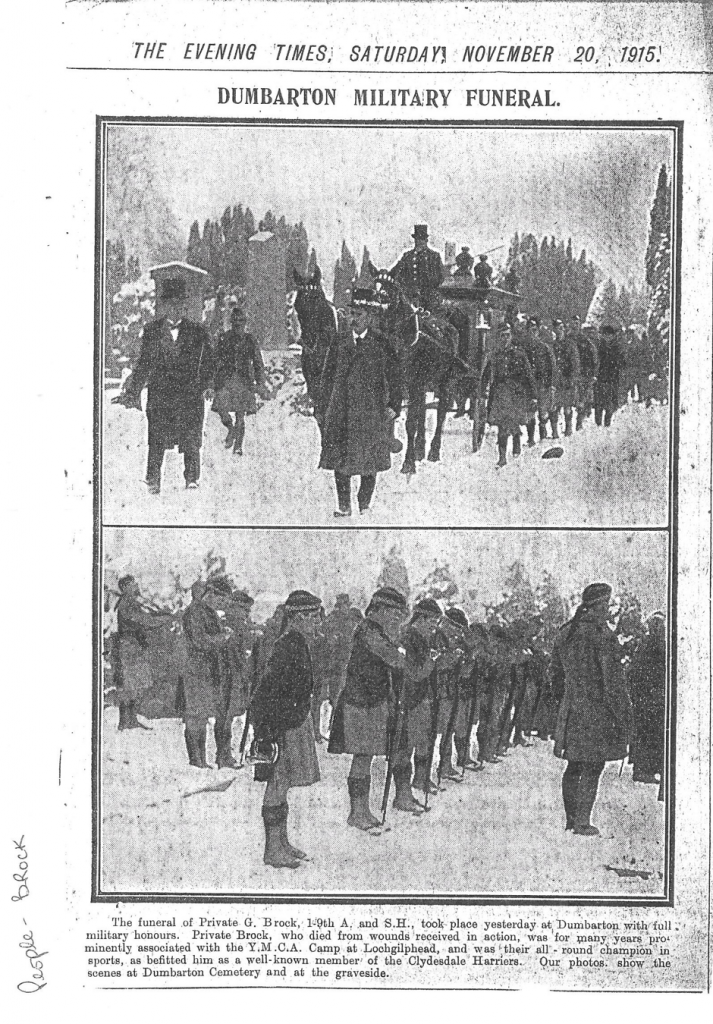 Many, many Clydesdale Harriers lost their lives in the Great War.   The publicity surrounding sportsmen who contributed to the British success in this conflict and of those who gave their lives is well documented in the books about the football players in McCrae’s Battalion but it was inevitable that men from other sports would have been involved.   This page looks at some of the Clydesdale Harriers who lost their lives in the war: the Erskine family tragedy was perhaps the most dramatic and heart breaking of them all – father James had been a founding member of the club and had lost two children in infancy but enlisted when the call for volunteers went out.   He was followed in short order by sons Thomas Barrie Erskine and Ralph Erskine.   Both sons were killed in the war, Thomas in 1915 and Ralph in 1918.   Read about them at    James Erskine,  Thomas Barrie Erskine,  and  Ralph Erskine .   There is a lot of correspondence from T Barrie on the internet and there are links from his page.

There were many others such as Gabriel Brock whose family were partners in the Denny Shipbuilding firm; born into a comfortably well off family he was wounded in the first year of the war and later died of tetanus.   T Barrie Erskine was one of two club secretaries, the other being Harold Servant who died in Langensalza prison camp, one of five British prisoners and the only Scot.   Harold lived in the west end of Glasgow in Crow Road at its junction with Southbrae Drive.   Another who made the supreme sacrifice was Wilfred Cramb – a Glasgow University trained doctor from Radnor Park in Clydebank, a former pupil at Glasgow High School, who like Ralph Erskine transferred to the Flying Corps and died in 1917.   There are many others (J Marshall Mitchell. RW Patterson, James Miller, Alex Younger and many more) although the total figure will never be known; some may be added to this page in the course of time.

The photograph below is of Gabriel Brock. 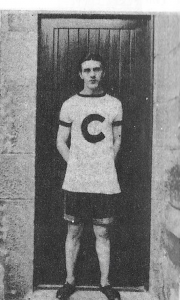 There were of course runners from all over the world who died in the War.   Scottish Olympian Wyndham Hallswell was killed in March 1915, the victim of a sniper’s bullet, a favourite at Scottish meetings, George Butterfield of Darlington was 24th September, 1917, and Jimmy Duffy was killed at Ypres on 23rd April 1915.

There is a lot of detail of Duffy’s career at the link which is to an article for this website by Alex Wilson and the following quote is from a report on the Rangers Sports of 1906 (where Halswell was also a competitor):

“A very good meeting was the verdict and on the Monday, the ‘feature of the meeting’ was the running of George Butterfield in the 1000 yards.  A word about Butterfield is maybe appropriate at this point.   He was an Englishman (born in Stockton-On-Tees in 1879) who won the AAA’s mile title in 1905, 1906 and 1907, he also ran the world’s fastest mile in 1906 and ran in the London Olympics in 1908 in both 800m and 1500m.   There was a considerable body of knowledgeable opinion that favoured him for at least a medal in the Olympic 1500 but the London organisers had decided that only heat winners would go into the final.   The Americans, among others, protested about this but it stood, and the draw for heats was made in secret.   Butterfield was drawn in the same heat as America’s  Mel Sheppard who won the heat in a new Olympic record time of 4:05.0.   It was a bit of a travesty with several athletes mush slower than Butterfield making the final simply because they had been drawn in a slower heat.   He died in the First World War serving with the Royal Garrison Artillery.  Local papers were fond of the story that he once raced a greyhound – and the dog was second!   Butterfield was a favourite at Ibrox where he raced several times over the years and his London conqueror Sheppard was also highly thought of by the Ibrox crowds.”

The list of Olympians of all sports who were killed was huge, just check Wikipedia, but among the more tragic was the death of Jean Bouin who was killed by what we now call ‘friendly  fire’ on 29th September, 1914.