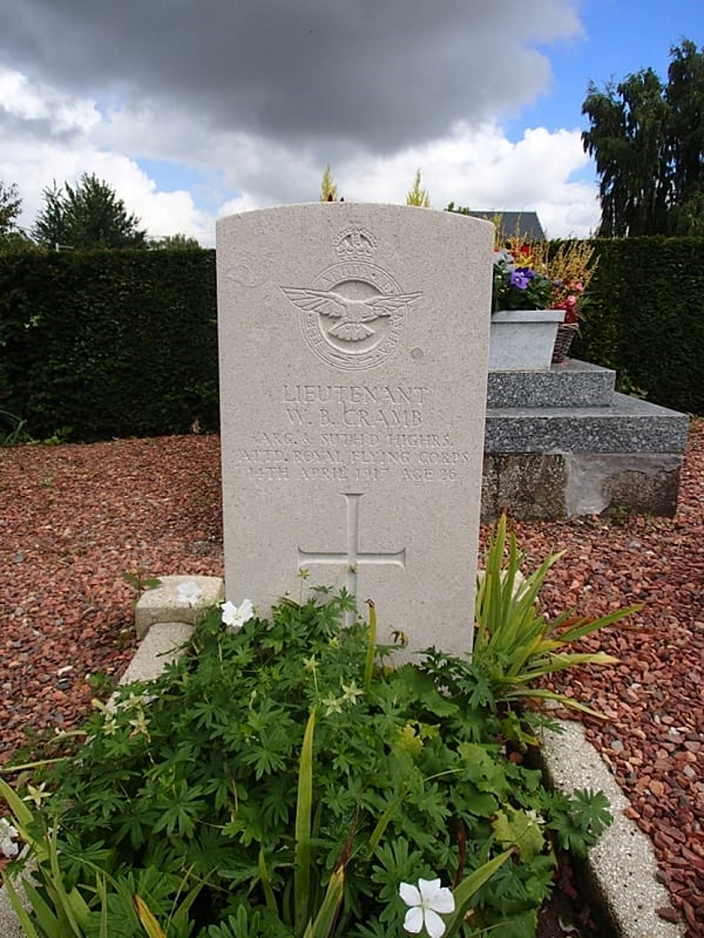 Wilfrid Brown Cramb was born on the 24th September 1890 at Roselea, Radnor Park, Dalmuir, Dunbartonshire, to David Cramb, a Foundry Superintendent, and Jessie Cramb (nee Brown), who had married on the 18th February 1875 in St Stephens, Edinburgh. He was a pupil at The High School of Glasgow, where he was known for his sporting prowess. In 1911 he followed his older brother Rutherford to the University of Glasgow Medical Faculty. In first year he followed a standard curriculum, though in matriculating for second and third years he enrolled in just one class, Chemistry. Clearly proud of his University affiliation, his address was given in club documentation as ‘Glasgow University Union’.

Like fellow Glasgow University student Philip Oliphant Ray, who died the previous day, he was an adventurous young man. He was a well-known sports enthusiast, a member of the Clydesdale Harriers, a rugby player and motor cyclist who, in 1913 had attempted to ride his motorbike to the top of Ben Lomond before falling and dislocating his shoulder not far from the summit.

In 1914, however, he abandoned his studies and in September went to France as a stretcher bearer with the 1st unit of the Scottish Branch of the British Red Cross. There he also took an interest in motorised ambulances to convey the wounded, and submitted a design suggestion which was later used. In June 1915 he received his commission to the 4th Bn. Argyll and Sutherland Highlanders, serving at and surviving the battles of Loos and the Somme before being attached to the Royal Flying Corps in 1917.

Lieutenant Wilfrid Brown Cramb had been flying for just six weeks when he was killed in the skies above Arras. Though numerically superior to the German Air Force, British planes were older, less well armed and crews not so rigorously trained. Bloody April marked the high point for Germany in the air. Britain lost 245 planes, 211 crew were killed and 108 taken prisoner. Despite the losses, crews were still able to bring back reconnaissance photographs which aided the British advance at Arras. Britain quickly made strenuous and successful efforts to gain supremacy in the air.

Cramb is commemorated along with 483 others from the High School of Glasgow on the School War Memorial and also at the Everyone Remembered website and his details are at https://www.everyoneremembered.org/profiles/soldier/2028785/ .

He was posted missing on the 14th April 1917, believed to be well behind German lines after his plane met heavy anti-aircraft fire. His death in the engagement known as ‘Bloody April’ was confirmed two weeks later in news from Berlin

Wilfrid Cramb was buried at Noyelles by the Germans and his identity disc and pocket-book were returned to his family through a neutral embassy. He was survived by his parents and siblings. His brother Rutherford, a Glasgow graduate, served as a Captain in the Royal Army Medical Corps. A further connection to the University came through his uncle, Professor John Adam Cramb (1862-1913), whose book ‘Germany and England’ helped form British opinions of the international crisis looming in the prewar years. Lieutenant Wilfrid Cramb is remembered by the High School of Glasgow and the Dalmuir Parish Church Rolls of Honour, in addition to that of his alma mater