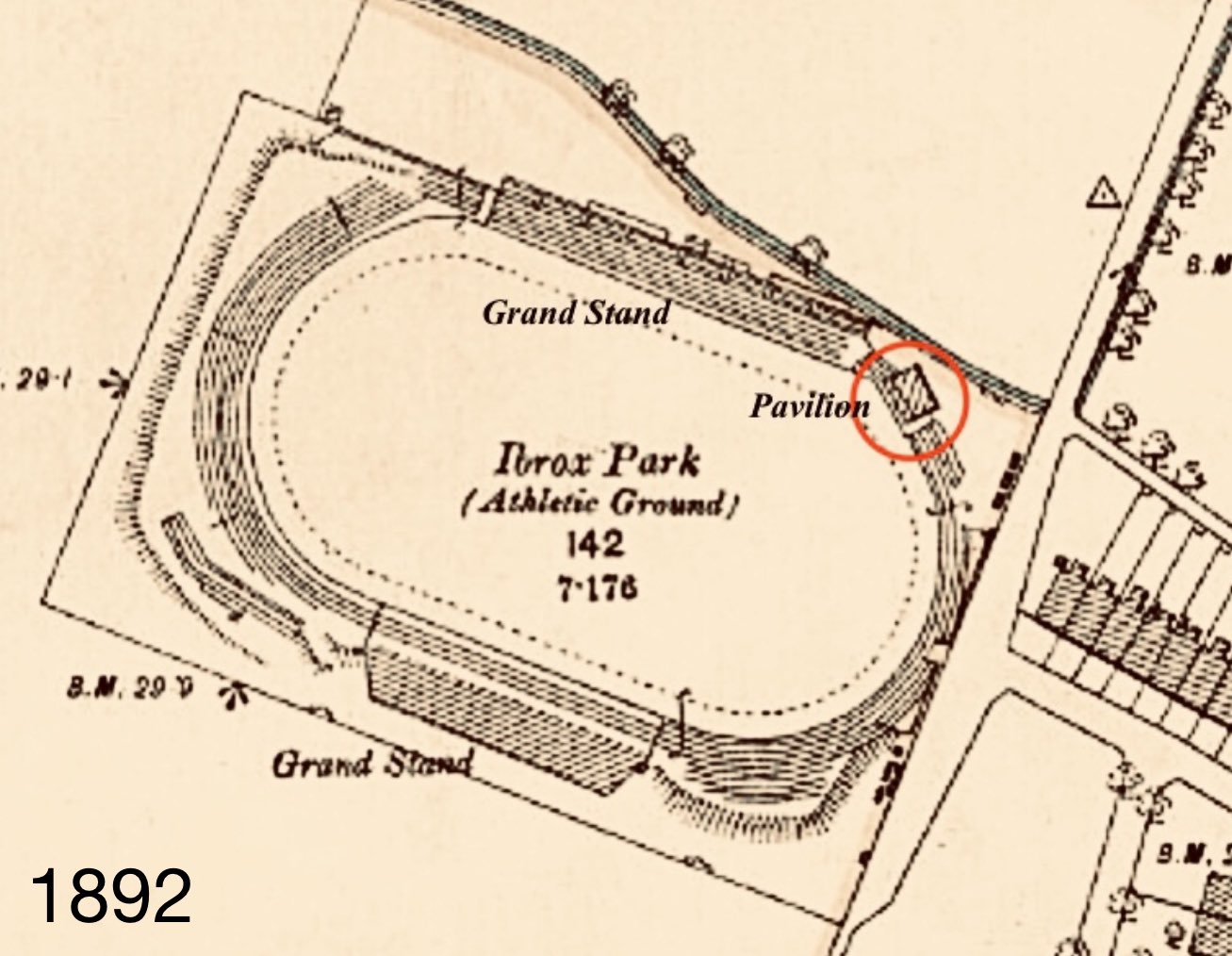 The first SAAA Championships to be held at Ibrox Park were on Saturday, 22nd June, 1895, at a time of great controversy in the sport.   There was a disagreement between Clydesdale Harriers, the biggest club in the land by far, and the SAAA  as a result of which the Harriers left the SAAA and set up their own governing body.   This was the SAAU (Scottish Amateur Athletics Union) which held its own championships and events.   On 22nd June the SAAA held their Championships at Ibrox while the SAAU held theirs at Ibrox in conjunction with the SCU (Scottish Cyclists Union).   The report on the Ibrox meeting in the “Scottish Referee” the following Monday says: 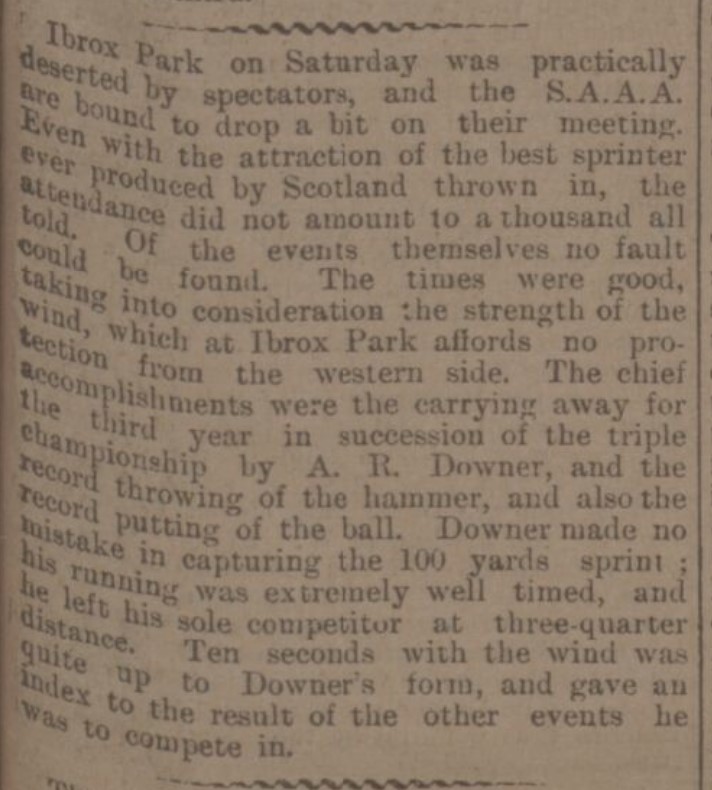 Meanwhile across the city at Hampden Park, there was a real parade of Scottish champions in the form of such athletes as W Robertson, S Duffus, RA Vogt and many more while the  only real star at Ibrox was AR Downer.   In addition spectators at Hampden withnessed a significant half-mile race.   There had been a battle for the honour of being the first Scot under 2 minutes for the half mile with Robert Mitchell (St Mirren and Clydesdale), Walter Malcolm (Morton FC and Clydesdale) and Robert Langlands (Clydesdale Harriers.   In the SAAU championships the race between Mitchell and Langlands was won by Langlands in 1:59.6.    The crowd was estimated to be around 6,900. 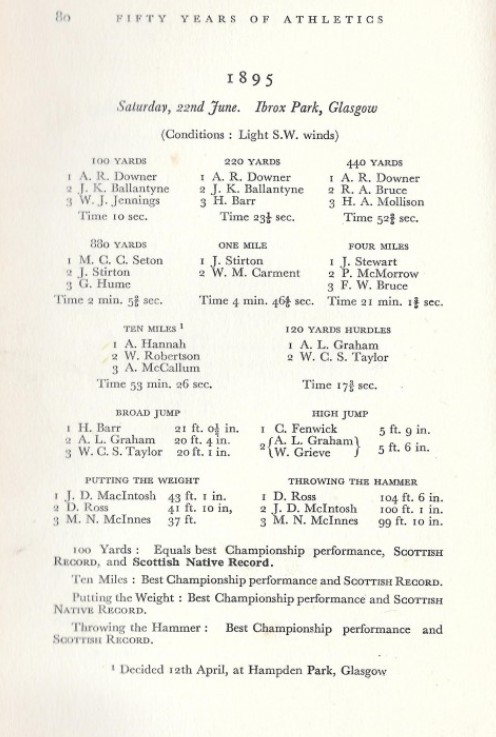 There was a gap of eight years before the next visit of the SAAA for their championships which were held on Saturday, 20th June, 1903.    The feud between SAAA and SAAU was now over and done with and there was a single championship held.   The “Glasgow Herald” reported “The twenty first annual championship meeting was held at Ibrox Park on Saturday afternoon.   The gathering was associated with delightful weather and the track was firm and in favour of fast racing.   Three of the champions did not defend their titles, the absentees being J McCormack, London AC, half mile; J McLean, London, who held championship honours for the 100 and 220 yards flat races, and H Nicolson, putting the weight.   Mr McLean is resident in New York, McCormack is in South Africa and Nicolson is now a professional.”    There was “a goodly crowd” present according to the “Scottish Referee” who hailed the top man of the day as John McGough of Bellahouston Harriers with this drawing and comment.

He well deserved the honour having won three endurance events – the Half Mile, One Mile and Four Miles events.    You will note that the Bellahouston Harriers ‘logo’ is just the same in the 21st century as it was when McGough sported it.   The results on the days were as follows: 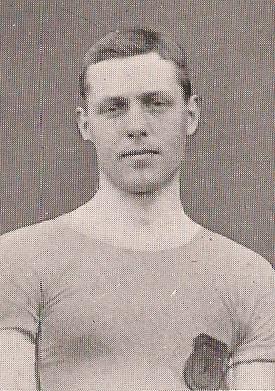 Two years later the championships were back in the west and back at Ibrox.   They were held on Saturday 24th June, 1905, ‘under delightful weather’.   A look at the results below is an indication of the quality of athletes on view.   JP Stark in the sprints, McGough in the Mile, Stevenson v Jack in the Four Miles, Stronach (above) in the hurdles, TR Nicolson in the throws, and maybe the biggest name of them all, Halswell in the 440 and 880.   There were also some really big names among those placed such as WH Welsh.   There were three best championship performances and two best performances were equalled. 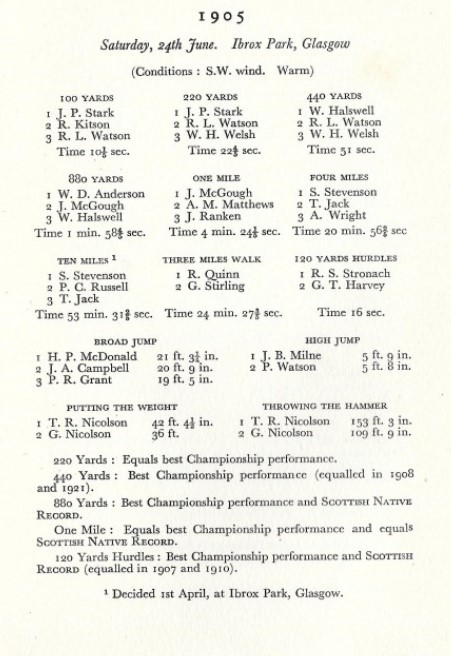 Saturday, 26th June, 1909,  was the next visit of the SAAA Championships to Ibrox Park and they were welcomed by the Scottish Referee with the picture below. 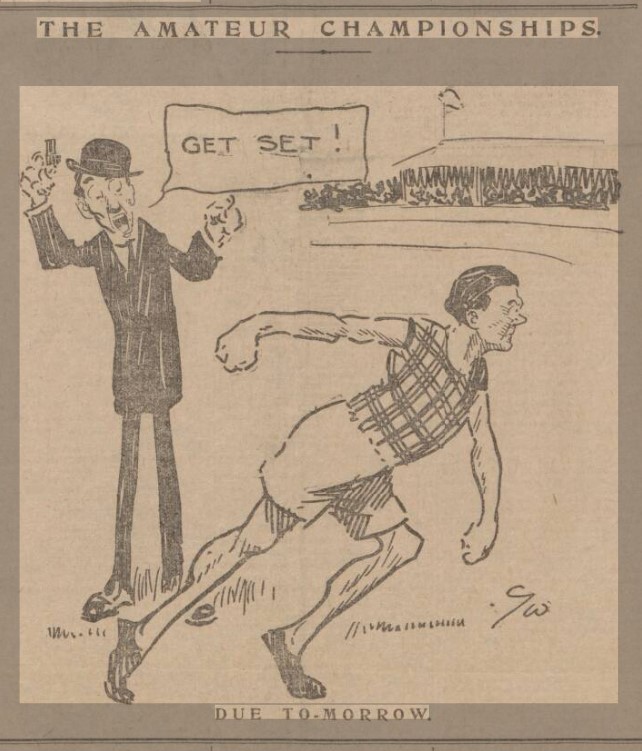 It went on to commend the stadium – 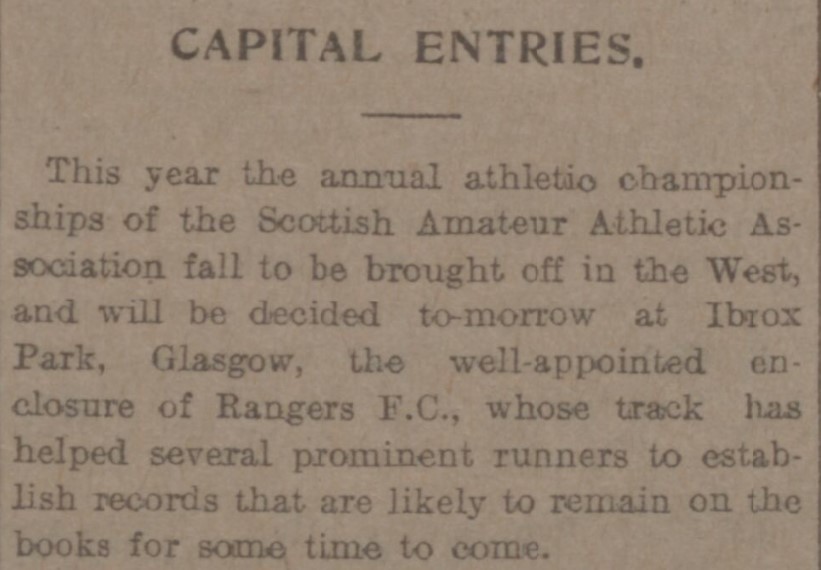 Entries were high but the 1909 championships were held, however, at a time when support for the sport was dwindling and among the reasons put forward for this had been the retiral of Halswell.   Came the day however and there were several of the very top names in action.   The weather was fine but the sport was even better if the ‘Referee’ is to be believed –

The crowd was not the biggest and the rain during the week had made the turf a bit on the heavy side but the cinder path was in ‘first rate order’ after the care bestowed on it by groundsman Cameron.   The half mile was a good race with the holder RS Duncan facing stern opposition – J Ballantine led at the bell, Adam Turnbull of Clydesdale Harriers went in front at 220 to go and looked like the winner until Duncan eased past and won in 2:02.5, a yard in front of Rurnbull with Ballantine third ‘a couple of yards back’.   There was not ‘a laggard’ in the field.   A good win in a good race and in a good time too.   The race of the afternoon however was the one mile in which HT Jamieson managed to defeat John McGough by a yard and a half with Anglo-Scot McNicol half a yard back and T Welsh fourth. 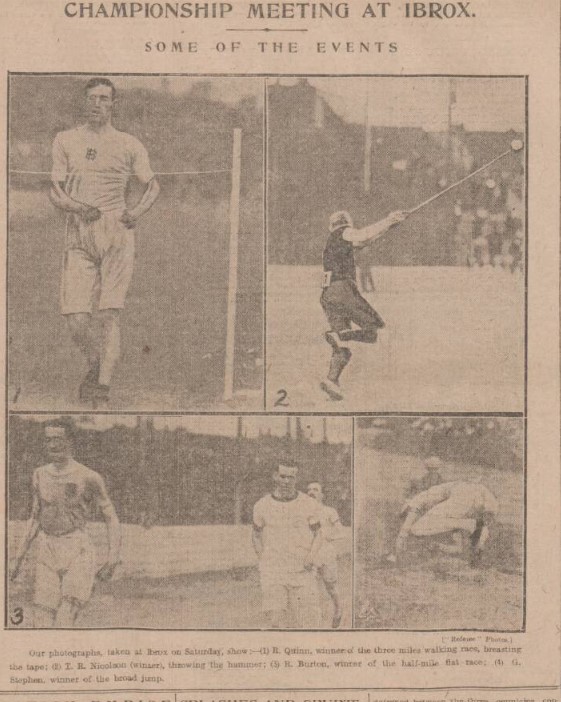 The complete results for the championships were as follows. 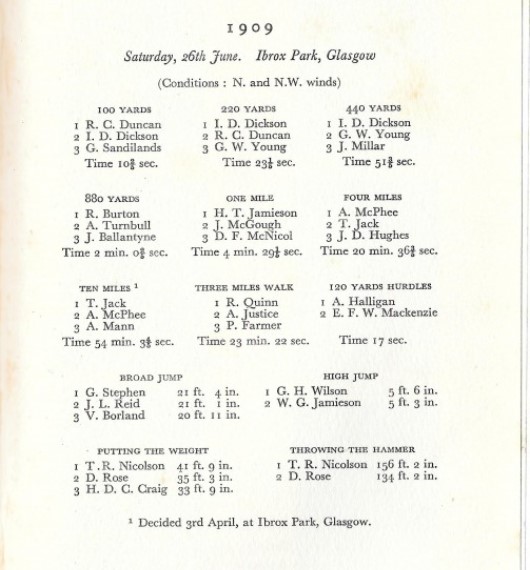 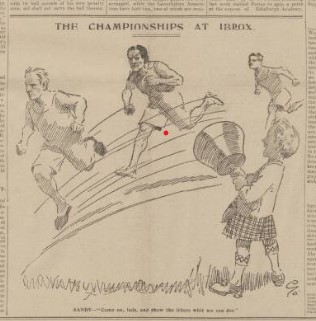 Again, the track was part of the story – the comments are worthy of a direct quote from the ‘Scottish Referee’ of the day before the meeting:

The athletics were worthy of a better crowd than actually attended with three double event winners and TR Nicolson winning his seventh short putt title.    A glance at the runners and other competitors will tell you all about the quality.   Note –

NB: The JT Soutter link is an interesting one from several points of view, not least the question of, “Whatever happened to ..?” 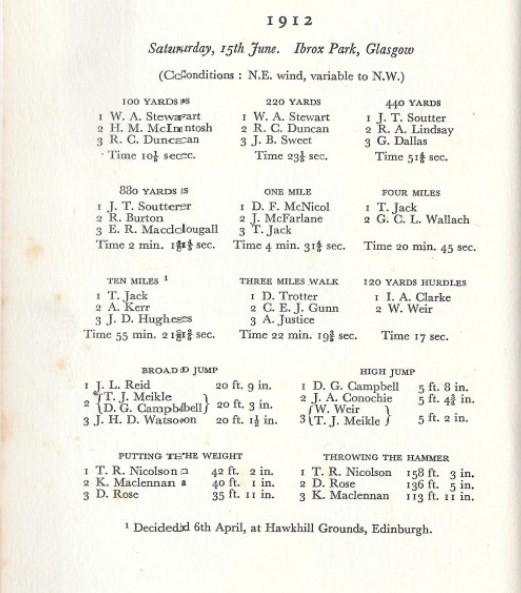 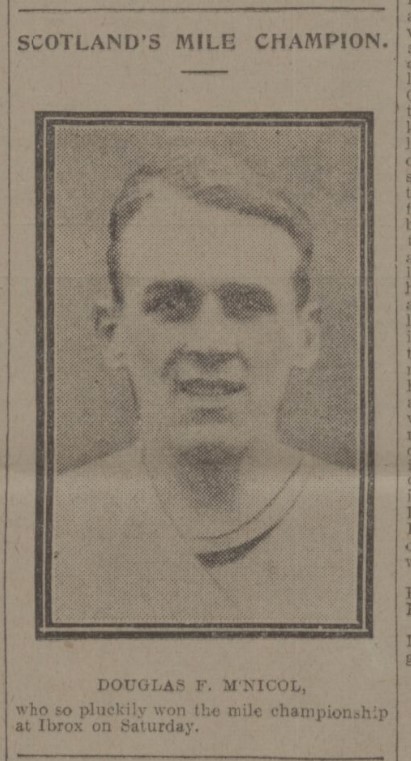