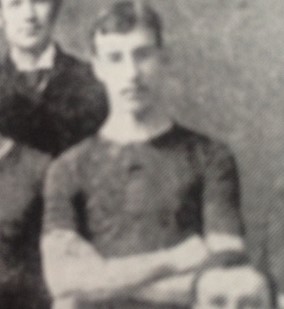 William Gabriel had a short but impressive athletic career. Born in what is now Cumbria, he was a medical student at the University of Edinburgh in the very early 1880s. He ran for both Edinburgh University (his first choice on track) and Edinburgh Harriers and in addition to setting a Scottish record for 3 miles, he was also a ‘counter’ in both the Edinburgh Harriers Teams of 1886 and 1887 that won the Scottish Cross-Country Championships narrowly missing out on an individual medal by placing 4th in both races. He served as both Captain of the Club and as Club President.
William was born in Cumbria to Edward and Mary Gabriel in early January 1861 (birth registered in January). His father, originally from Bristol, was a ‘Perpetual Curate of the Church of England’ at St George’s Church, Kendal although living at Rockcliffe near Carlisle. There is some indication that his mother may have had a sight impairment from the census of 1881. He had a sister Fanny aged 3 in 1861 and a brother Ernest aged 2 in the same census year, while William is listed as 4 months (thus very early January 1861 as a birth month). They employed one nurse and two servants. Later in the 1881 census there is no longer a record of Ernest but there is a sister Ruth aged 17 in 1881 and William is listed as a Medical Student aged 20. This is in line with other records where he is listed as a doctor. There is, as yet, no record of when he matriculated at the University of Edinburgh, but the indication is that it is likely that he was in and around Edinburgh 1880 and 1881. There has been no research as yet within the university archives as to when he enrolled and when he graduated but there are records of him competing until 1887. There are no records of where he went to school. The first of his athletics experiences are recorded in 1881 aged 21 running in the One mile flat handicap and winning at the Ulster Cricket Club Athletic Sports. He also ran in the 2 miles against the legendary Snook. This would indicate some experience of athletics while still at school and also indicate a life style that allowed him to travel for meetings. 1881 would probably have been at the end of his first year as an undergraduate. His athletic career is summarised at the end of this piece. He appeared to return home at the end of July each year and played cricket.
WMG had his most productive period athletically from 1885 to 1887 as a founding member of Edinburgh Harriers in 1885, 1st captain of the club and running as part of the winning EH team at the first Scottish Cross-Country Championships in 1886. During the next cross-country season, he was again a counting member of the winning team at the second cross-country championships in 1887 and also set a Scottish 3 mile record on the track in May, 1887 at the Edinburgh Harriers Sports. He was President of the club in 1886-1887 and remained on the committee for season 1887-1888 despite not appearing to take any further practical interest in the club.
His only and perhaps peculiar contribution politically (apart from his presence on the Cross-country Championship Organising Committee for 1887) was his intervention as President of EH at what can only be described as stereotypically bad behaviour of the medical students of the club, when they disrupted a theatre performance at the Lyceum Theatre, Edinburgh in a fit of pique:

After leaving Edinburgh around 1887/1888, William took up residence near Carlisle where he married Mary Collinson Tully from Kirkandrews-on-Eden (only a few miles from Rockcliffe) aged 30 in July, 1889. Mary’s father was a Sea Captain so was brought up mainly by her mother.