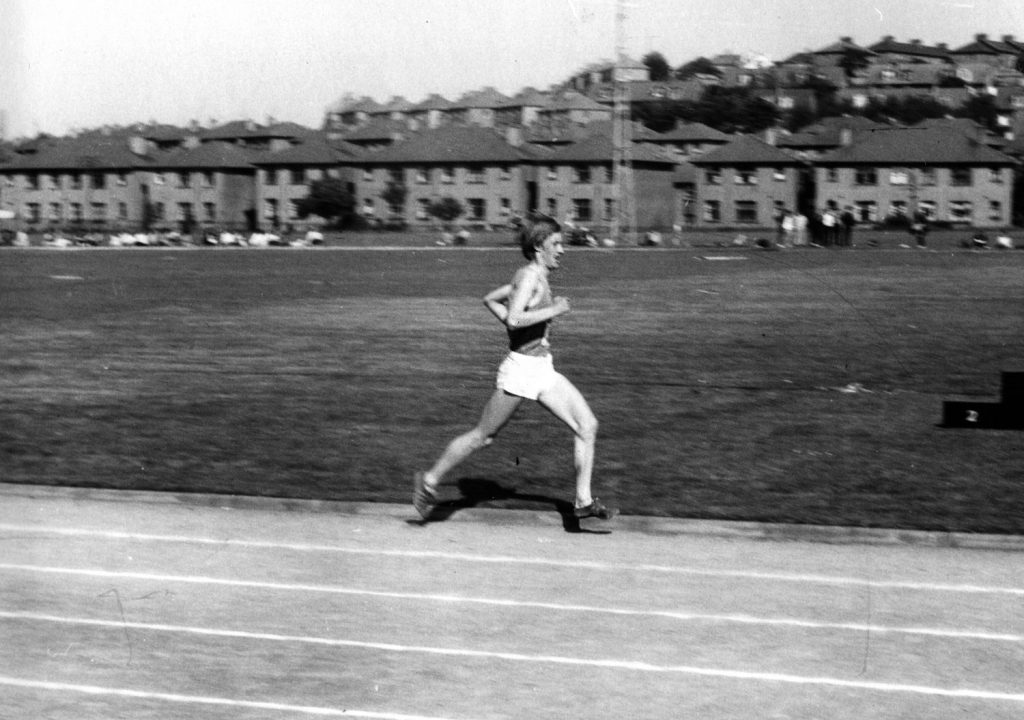 1970 was the BIG YEAR.   The Commonwealth Games w coming to Scotland for the first time, to Edinbuirgh in fact and all who had any ambition at all were training and laying out race schedules with that in mind.   The whole season was coming forward and peaks had to be reached earlier.   With their season normally starting in early April and peakiong in June, the universities suddenly found other meetings were starting to crowd their season and ‘pinch’ their big race dates.   There was nothing they could do about it so they just went on with their normal fixtures with minor tweaks.

The season started on 11th April with Heriot-Watt competing against Queen’s University, Belfast, and Edinburgh Southern Harriers at Pitreavie: the match replaced the cancelled fixture between Edinburgh University and Queen’s and resulted in a win for Heriot-Watt (96 pts) from Queen’s (82) and ESH (66).   The result was pretty well meaningless – David Jenkins ran as a guest for H-W and won the 100 and 200m.    TA Renwick (H-W) won the 400m and 800m, and G Grant (H-W) won the 1500m.   Looked good for Heriot-Watt and the following Saturday they held their club championships.   On that day, 12 of the 17 titles on offer went to Norwegian athletes.   K Karlsen won three events (pole vault, javelin and weight-over-bar), and A skiftenes (1500m and 5000m), T Tangen (110m hurdles and long jump) and J Ranke (discus and hammer) won two events each.

Edinburgh University opened its season on 25th April against Dundee and Heriot-Watt at Peffermill.   Star of the day was hurdler AG Webb, reigning SAAA 400m hurdling champion,  who won the 200m and the 400m hurdles.   Edinburgh defeated Heriot-Watt by 94 to 86, and Dundee by 111 to 41;  and Heriot-Watt beat Dundee 115 to 49.   In the women’s triangular match, Dundeee had 49 points to 46 for Edinburgh to 10 for Heriot-Watt.

On 16th May, 1970 the Scottish Universities Championships championships were held at Meadowbank.  There were no fewer than 12 best championship poerformances – eight by men and four by women.   Possibly the best was by David Wilson (H-W) who won the high jump with a height of 6′ 7 1/4″ which bettered the existing record by 4 1/4 inches.   The event winners were (championship best performances marked *

The women’s team result was the closest for a long time – and neither of the ‘big two’. Edinburgh and Glasgow figured in it at all.   With Heriot=-Watt winning the men’s competition, it was a rather different looking universities championship. 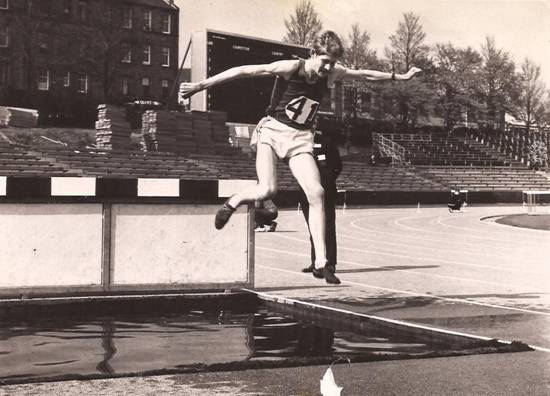 The District championships were held on 23rd May.   It was a tale of two halves.   The only students who did well in the West was I O’Muircheartaigh (G – 3rd 400m) and he wasn’t even Scottish.   In the East, the situation was much healthier.   WT Bell (St A) was second in the 100m, CA Murdoch (A) was third in the 200m, Tom Renwick (H-W) won the 400m, N Hargreaves (E) was third in the 400m), Jim Dingwall (E) second in the 1500m, Dave Logue (won the steeplechase, RA Davidson (E) won the 110m hurdles, Andy Webb (A) won the 400m hurdles, AH Brown (St A) third in the 400m hurdles, KG Morrison (E) second in the long jump, W Clarke (E) won the triple jump, GJ Davidson (E) second shot putt, and JH Burnett (E) second in the javelin.  All events were earlier in the season becaude of the imminence of the Empire Games with the SAAA championships being held on the first Saturday in June.

Saturday, 6th June at Meadowbank was the venue, SAAA championships followed by the meeting of selectors who would pick the team.   University athletes who medalled were – gold:   DN Wilson (H-W, 110 hurdles and High Jump) and G Bryan-Jones (E, Steeplechase);  silver: RA Davidson (E, 110 hurdles) and AG Webb (E, 400m hurdles); bronze: J Dingwall (E, 1500m).   There were no women from the universities in the top three in their events where, to be fair to them, a whole host of the very best Irish women from Short’s, from Ballymena and from Albert Foundry were scoopimng up medals.   Former students such as Bill Ewing (A), Adrian Weatherhead (H-W), David Stevenson (E), Steart Seale (E) aand L Bryce (S) were all among the medals too.   The team was announced on 16th June, 1970, and the universities had less representation than they might have warranted for a home Games.   Wilson was included for the high jump,  along with Fairbrother who was the team captain, but not for the hurdles where there was only one runner picked; Bryan Jones was selected for the steeplechase; A Webb (E, 400m hurdles) and Lawrie Bryce was selected for the hammer throw and that was the extent of the men deemed worthy of a place.   Former students who were nominated included Fergue Murray (E) and D Macgregor (St A) for the marathon, HC Robertson (triple jump), D Stevenson (E, pole vault).

How did they perform?   Gareth Bryan-Jones was fourth in the steeplechase final, missing a medal by 3 seconds with Dave Logue representing Ireland going out in the second heat; David Wilson was seventh, and first Scot, in the Final;  Andrew Webb progressed to the semi-final where he was eliminated, Lawrie Bryce was fourth in the final of the hammer.   Fergus and Donald performed nobly in the marathon, finishing 7th and 8th,  Hamish Robertson was eighth in the final of the long jump and failed to qualify in the triple jump and David Stevenson was ninth in the pole vault.   Bernie Nottage of Bahamas and Aberdeen University ran in both 100 and 200m without making the final.

On 1st May 1971 the big universities match was a four cornered affair between Edinburgh University, Heriot-Watt University, Aberdeen University and Edinburgh Southern Harriers which was won by ESH with 192 points from H-W (157), EUAC 148 and Aberdeen (100).   David Jenkins for the University was the stand out performer when he won the 100m in 10.8 and then won the 400m in 46.4 seconds which was the fastest time by a British runner since 1968 and well inside the qualifying time of 47 seconds for the European Games.   It was also an age best for an 18 year old.   Craig Douglas for ESH won the 800m in 1:53.5 and the 1500m in 3:48.1.    Commonwealth Games runner IW Turnbull (A) won the 200m, I Elliott (ESH) won the 5000m, David Wilson (H-W) won the 110 hurdles and the high jump, AT Murray ESH won the 400m hurdles, W Clark (E) won the long and triple jumps, W Swann (ESH) won the pole vault, Sandy Sutherland (ESH) won the shot, AM Black (H-W) the discus, G Applegate (A) the hammer and JM Burnett (A) won the javelin.

On the same day, St Andrews was expecting a match against Strathclyde University but only 5 athletes turned up from Glasgow so the match was declared void.  However in the events which were covered D Lorimer won the 5000m in 15:33.2 which was a university record, taking 18.3 seconds from the existing best time.

In the District Championships, it was the same old story: many titles and medals in the East were won by University athletes with not a single championship coming the way of either Glasgow or Strathclyde Universities.   Winners in the east included Graeme Grant (H-W), Alistair McxKean (E), a one-two in the steeplechase where Bryan-Jones (E) won from Youngson (A), and a double from Clark (E).   The British Universities Championships were held on 12th June at Birmingham and several Scots took the chance to make their mark.   Wendy Blackwood won the shot putt s well as the discus throw and Tom Campbell won the hammer.   Both were from Strathclyde.    Other notable performances from Scots were Frank Clement’s second place in the 1500m in 3:48, W Adlei (S) second in the high jump, D Rae (G) 3rd in the shot, N Sandilands (G) 3rd in the discus and K Hay (A) 4th in 400m hurdles.   Women who came home with medals, in addition to Blackwood, M Flockhart (A) 3rd in 100m; J Goodall (A) 2nd in 80m hurdles and J Robertson (St A) 2nd in high jump.

The national championships held at Meadowbank on 26th June David Jenkins (EUAC) again won two events – the 200m and 400m this time – as did David Wilson (also EUAC) when he won the sprint hurdles and high jump.   Some outstanding former students such as Gareth Bryan-Jpones, Hamish Robertson and Sandy Sutherland came away with gold in their kit bags too.   Second places were taken by Frank Clement (S) in the 800m, Tom Campbell (S) in the hammer and S McCallum (G) in the long jump.   In the women’s championships there was an invasion of top class athletes from England and three Americans too which meant there were ew titles for Scots women and even fewer for Scottish university students.   Moira Walls (G) was second in the long jump and E Rutherford (E) second in the javelin were the only medal winners from the universities.

In 1972, Olympic year, the first inter-university match was on 15th April between St Andrews and Queen;s, Belfast, which was won by the Irish team by 99 points to 83.   Next week, 22nd April saw several matches ake place.   Edinburgh Southern Edinburgh AC, Heriot-Watt and Dundee University faced off at Meadowbank where the scores were ESH 186, EAC 146, Heriot-Watt 130 and Dundee 102.   In the Glasgow, Aberdeen and Strathclyde meeting at Westerlands, Alistair Hunter and Charles Kyatzui (Both Glasgow) had doubles – Hunter won the 400m (51.4) and the 800m (1:56) and Kwatzui won the 100m/200m double in 11 sec and 22.6.   Glasgow won the contest with 169, Aberdeen had 140 and Strathclyde 62.   Edinburgh took on St Andrews whom they defeated with 97 1/2 to 84 1/2 at St Andrews.   Edinburgh’s Andrew Makowski won both discus (115′ 3″) and hammer (24.69m)and Robert Smith of St Andres won both hurdles races.   The Glasgow championships were held on th May and the main item to note was the win in the 5000m of Dave Logue who had run in the Commonwealth Games for Ireland while a student at Edinburgh University.   He had now moved along the M8 to Glasgow to continue his studies. 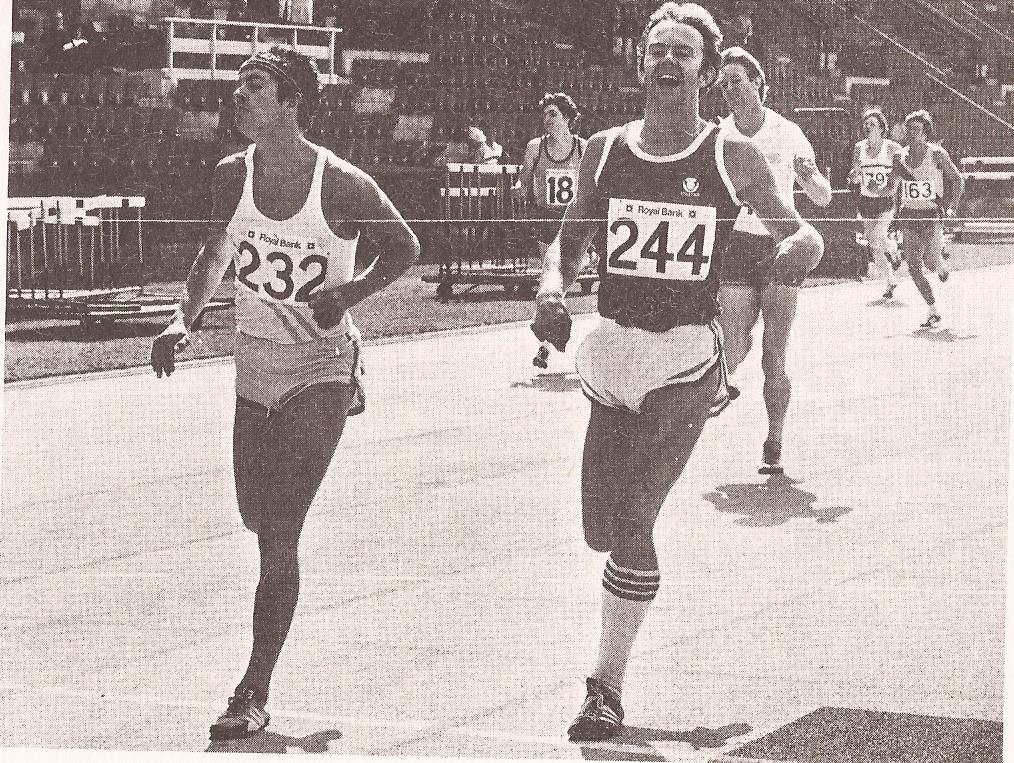 The Universities Championships that year were held at Balgownie, Aberdeen.   Results were as follows:

In April, 1973, the match between Edinburgh and Glasgow Universities was held at Peffermill on 28th of the month with Edinburgh winning the overall points tally for the Appleton Trophy: their men lost to the Glasgow team but the women won decisively to have an aggregate of 145 to Glasgow’s 144 points.   This was a good tune-up for the Scottish Universities championships two weeks later but the final result was the same.   The report in the ‘Glasgow Herald’ read as follows:

“Glasgow University could legitimately claim that the fates had been unkind to them this season.   After leading all the way through the Appleton Trophy contest in Edinburgh recently, only to be beaten by one point by the home club, they suffered a similar affront at the Scottish Universities championships at Meadowbank on Saturday.   Glasgow had won seven men’s titles to four by Edinburgh when the men lined up for the last event, the 4 x 100 metres relay.   Glasgow were comfortable winners only to be disqualified for an infringement at the first take-over.   Edinburgh therefore won the event and the Rosebery Trophy.

After the hubbub had died down it appeared that Edinburgh would have won itin any case, although only by two points.   But amid the usual grousings that usually follow such narrow defeats there were more allegations that several Glasgow athletes were refused admission for reporting late while similar infringements went unpunished.   David Wilson had a successful comeback after his knee operation for Heriot-Watt, the holders who finished third.   He won the 110m hurdles in 14.9 sec, and the high jump with an easy 6 feet.   Results (men first):

The standards in 1973 were, by and large, not quite as high as in previous years although there were some standout performers – Jim Dingwall, David Wilson, Wendy Blackwood and Norman Gregor being probably the pick.