St Mirren moved to Westmarch from their Thistle Park ground in 1883.

Founded in 1877, St Mirren are reported to have held their first amateur sports in 1879.   Reports on the early years events are hard to come by so the intention is to begin with the events of 1881.   The club held their sports to start with at the Thistle Grounds in Paisley and over two Saturdays.   The first day was confined to St Mirren players with perhaps an extra race for boys included but the main event was the four-a-side football for which the preliminary rounds were held.  The following Saturday was the day for the open amateur athletics plus finals of confined events plus the last rounds of the four-a-sides.   Initially there was a tentative holding of a few events – one report in 1881 said there would be five open events including a bicycle race.   But the event grew in stature and was held subsequently at Westmarch and latterly at Love Street.   Since the first amateur athletic club was founded in 1885, the early years races and field events were contested in the main by members of the multitude of football clubs and the universities were also represented in the lists from time to time. 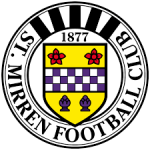 In 1881 the first day of the sports was held at Thistle Park, Greenhill in Paisley in pouring rain on 22nd July with the football contest being held first before a series of races confined to the club.   The second day was one week later with” five open races of which one is a two mile bicycle race.”  Details of this day’s proceedings are not available at present.   We do not have any actual reports of this meeting at the moment but the quest goes on.   Into 1882 and the first day was held on 22nd July, again at Thistle Park, and the report was largely given over to football with the results of the athletics being sketchily covered.   he following Saturday saw the big Glasgow Police Sports Meeting, plus events organised by the Queen’s Own Yeomanry Athletic Club Sports, a new body who held a very big meeting, as well as games held at Currie and Kelso.   There was no report on the St Mirren Sports in either the Glasgow Herald or The Scotsman – possibly because of the relative size of a meeting with few  athletic games. 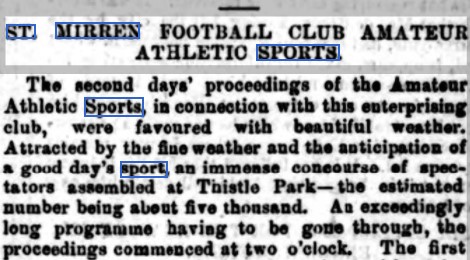 First day was July 22nd and the meeting held at Thistle Park, Paisley and was largely made up of preliminary rounds of the four-a-side football tournament and the first rounds of the confined athletics events.   The report on the second day as printed in the ‘Renfrewshire Gazette’ above tells us that it was a good afternoon and a good turnout of spectators.

There were eight open races, several confined events, cycle races and the 4-a-sides were won by Arthurlie over Dumbarton 2nds.   Given that these were amateur athletic sports, and given that there was no SAAA in 1882 (it appeared in 1883) the competitors were almost all members of football clubs.   Some are still good senior teams – St Mirren, Kilmarnock, Hearts, Rangers, Queens Park among them – others are now gone – Pilgrims, St Bernard’s, Abercorn, Argyle FC are just a few – and the names of some athletes who would win SAAA medals such as A Vallance (Rangers FC) who would later join Clydesdale Harriers with his more famous brother Tom,  and Robert Mitchell, about whom more later, of St Mirren.   It was another successful meeting and would have encouraged the club to continue with the venture

The report on the first day of the 1883 event was printed in the Glasgow Herald of July 23rd began:

“The new grounds of the St Mirren Football Club at Westmarch, Paisley, were opened on Saturday afternoon when the annual amateur athletic sports were held under the auspices of the club.   The field was in excellent condition and a neat cinder track which has been made between the space allotted to the playing of football and the ropes was found to be of great advantage to the “peds” who took part in the races.   A grandstand has been constructed at the north end of the field from which a good view of the events was obtained.”

The formula of the day followed that of previous years with confined events and the preliminary rounds of the 4-a-side tournament being played.   It is of interest to note that one of the judges was A McPhee, a noted distance runner and prize winner whose two sons – Alex and Duncan – would become stars of the amateur athletic scene.   Among the runners on the day in the confined events, Robert Mitchell would become one of the best half milers in the country winning half mile titles and setting a Scottish record for the event in the countdown to the first Scottish sub two minute half mile.

The second day of these sports which was held  at Westmarch, Paisley was most successful, a good programme and a large number of entries drawing forth a good crowd.  Held on 28th July, 1883, and the top item in the report in the Glasgow Herald the following Monday was the news that Dumbarton had won the 4-a-side football tournament.   The track and field events were ‘exceedingly closely contested’ and, in the absence of any open athletic clubs the competitors came from football and other sports clubs as well as a few from the Universities.   There were several outstanding competitors: Tom Vallance of the Rangers was second in the high jump and in the 120 yards hurdles;  there were two men running from scratch in the one mile  AP Findlay of Ayr who would go on to win the first ever national cross country championship, and DS Duncan from Edinburgh who would be a multi champion over all the distance races – Duncan was second and Findlay third behind a runner off a 120 yard handicap.   Dumbarton, Rangers, Ayr, Granton, 3rd LRV, Beith, Cambuslang and Queen’s Park were all represented in the meeting. 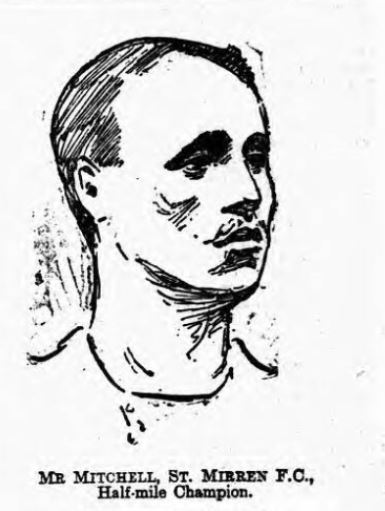 The preliminary rounds of the sports in 1884 were held on 19th July with events other than football confined to players for the club.   However there were a couple of open events with the sack race “an easy thing for ‘Tuck’ McIntyre (Rangers)“.

The real open athletics meeting took place on 26th July in the presence of three or four thousand spectators.   It was billed as one of the most important gatherings of amateur athletics that had taken place in the West of Scotland.’   The 4-a-side football was supported by most of the big clubs with Queen’s Park and Rangers both taking part, Queen’s winning from Cambuslang FC in the Final after taking out Rangers in the semi.   The athletics were all hotly contested with several athletes (eg Adam Turnbull and James Logan) who would become well known in the not too distant future taking part..

The 1885 amateur athletic sports, the sixth annual, were held at Westmarch, Paisley on 25th July.   On a good afternoon as far as the weather was concerned, there was a good crowd and the Glasgow Herald saw fit to comment that “On account chiefly of its fine racing track, the St Mirren meeting has attained the place of one of the first amateur athletic fixtures in the country and the success of Saturday’s gathering is certain to further extend its good name and popularity.”  Note the reference to the fine racing track which corroborates the comments on the first meeting at Westmarch.

The St Mirren players had had the advantage of the preliminary meeting the previous Saturday when the events were almost all confined to players, on which day A Vallance of the Rangers FC was competing in the Our Boys (Dundee) meeting in the Place kick (2nd), hurdles (1st) and One Mile (2nd) but passing the 4-a-side football match where Rangers were second to Renton FC. 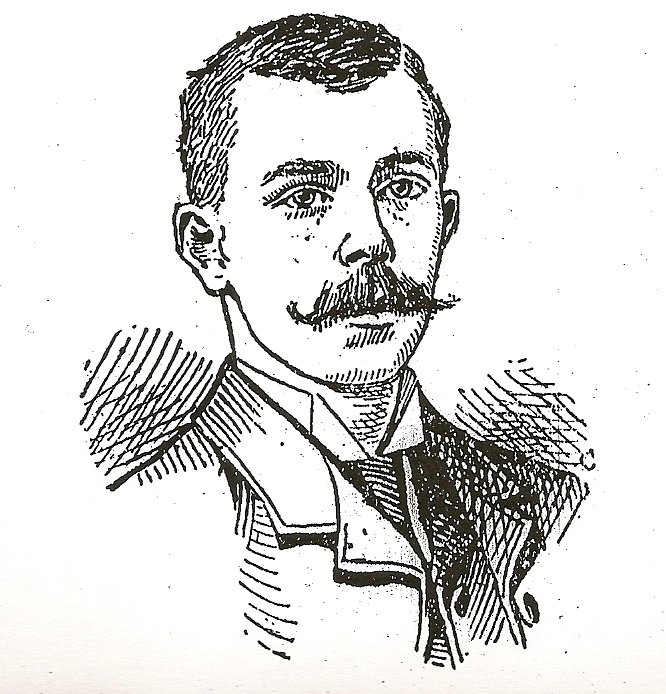 In 1886 the sports, now a major event in the sporting calendar, were held on 24th July with three confined events on the track – 100 yards, 440 yards and the half mile – plus a bicycle race plus the preliminaries of the four-a-sides plus an eleven a side tournament involving Morton, Abercorn, St Mirren, Port Glasgow, Morton and Arthurlie.  St Mirren beat Morton in the eleven-a-side tournament.  The main events however were held on 2nd August where there were open handicap races at 100, 220, 440, 880 yards and one mile as well as three bicycle races at the mile, two miles and five miles.   Interesting as the meeting was, events arising from it were maybe even more interesting.   The 100 yards had six heats, two semi finals and a final in which three men A McNab, R Stevenson and GT Ward all dead heated in 10 2/5th seconds.   The judges ordered an immediate re-run with no time for a breathing space.   McNab won and Ward was third.   In the 220 yards there were two men off scratch – T  Blair of Queen’s Park (2nd in the first heat) and GT Ward of Clydesdale Harriers (1st in the second heat) .   Neither placed in the final where the result was Green (Irvine Academicals) off 3 1/2 yards, McNab (Clydesdale Harriers) 8 yards and Campbell (Rangers)  off 11 yards.

That was in August and in September that year the sporting public read in the Scottish Umpire paper: “We hear that T. Blair (Queen’s Park FC) is anxious to meet G.T. Ward (Clydesdale Harriers) in a 220 yards race, the Harrier to get 4 yards. If the start is authentic and Ward in form the issue should not be in doubt.”   The challenge could not be ignored and the response came in November: “G.T. Ward (C.H.) thinks T. Blair (Q.P.) was only joking when he said he would give him 4 yards in 220, but if he really means it, he will accept his generous allowance or run level.”

The proposed match became a reality, a sporting gentleman put up a silver cup, the men and their representatives drew up the terms and the match took place at the St Mirren Sports in April 1887.   For the full story of the event and its build up read this article. 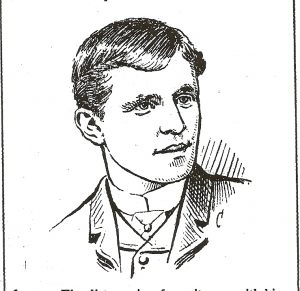 The sports were being held this year in April again at Westmarch and the crowd was reported to be 5000 with big entries (24 in the 100 yards and 21 in the 440).   The event was the feature of the meeting and was reported to be the first of its kind in Scotland.   Who won?   It is reported at the bottom of this cutting: 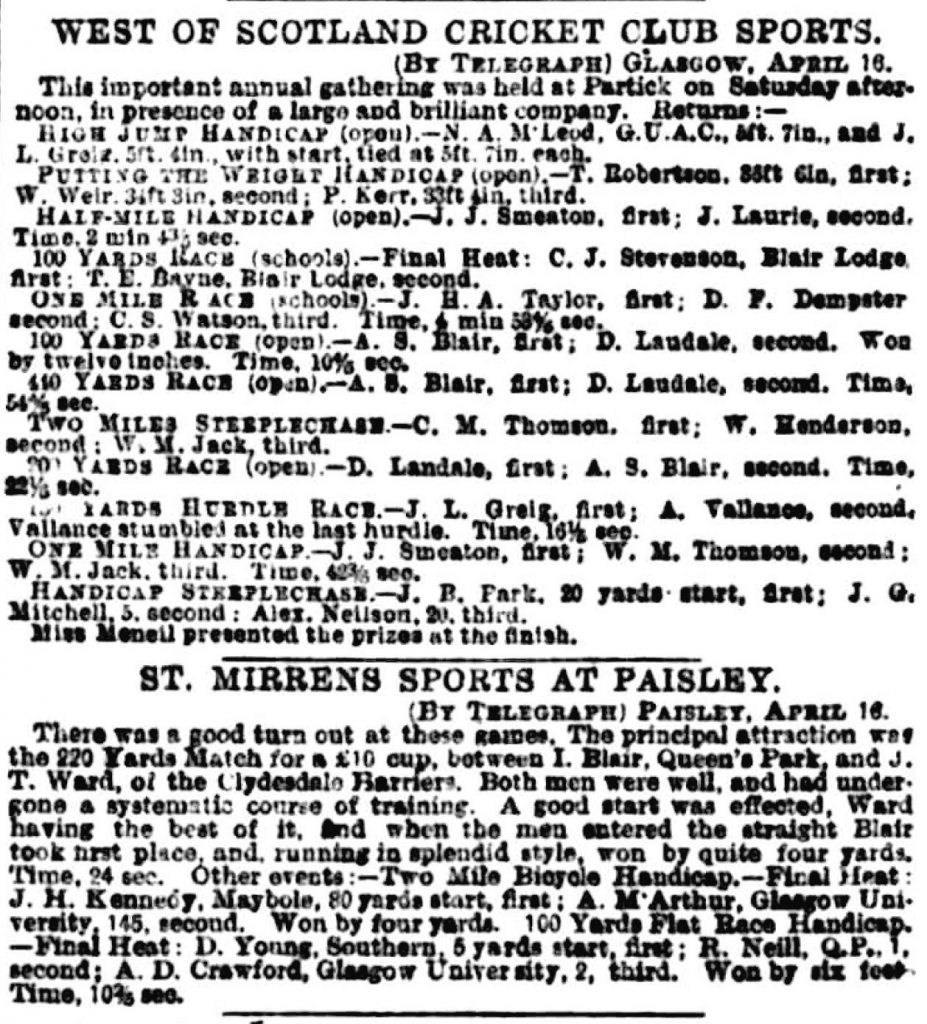 There was surprisingly little coverage of the sports – probably because of the extensive coverage of the West of Scotland Sports on the same afternoon in Glasgow where most of the established club runners were competing.   We have however noted the development of the St Mirren Sports from a little local meeting held over two Saturdays with few athletic events into a major athletics fixture in the SAAA calendar with a good track, efficient organisation and attracting good crowds.

The sports continued into the 20th century and were well attended with good quality prizes being awarded and top class athletes continuing to take part.