Into the new century and the first meeting of the two nations was on 29th June, 1901, at the Exhibition Grounds in Glasgow.   The score from the previous six matches was 6 – 1 to Ireland.   Could the Scots do better this time round?   The team included new man RS Stronach in the 120 yards hurdles, middle distance and cross-country champion J Paterson and WH Welsh in the quarter mile.   That the meeting was a success there can be no doubt.   But from the Irish perspective there was some head shaking over their prospects.   The following pessimistic preview in the Waterford Evening News was a fairly accurate forecast.

The meeting was held ‘in splendid weather’ before a large attendance estimated at 10,000.  Despite the apprehensions of the writer above, the Irish team had some star performers such as Kiely and P O’Connor who had set a world’s record for the long jump that summer of 24′ 7 1’2″.    O’Connor was another wonderful Irish athlete.   Born in Millom, Cumberland in England, he grew up in County Wicklow.   In 1899 he won All Ireland medals for long jump, triple jump and high jump, he later set a world record for the long jump and won two medals in the intercalated Olympic Games.   The interesting thing about the Olympics is that was asked to represent Great Britain but he chose to compete for Ireland.   The world record was set in Dublin at the Royal Dublin Society’s grounds on 27th May 1901.   He stayed in athletics after he ceased competing and actually returned to the Olympics as a judge.

The “Glasgow Herald” of 2nd July commented: “History is difficult to make sometimes but it was made at the Exhibition on Saturday in the great athletic contest between Ireland and Scotland – a contest which, as regards sustained interest, spontaneous enthusiasm and brilliant competition, has never been equalled in this city.  Every event riveted the closest attention, and when DW Mill of Greenock won the four mile and with it the match, there was a demonstration of enthusiasm which will not readily fade from the memories of those who witnessed it.”   The results: 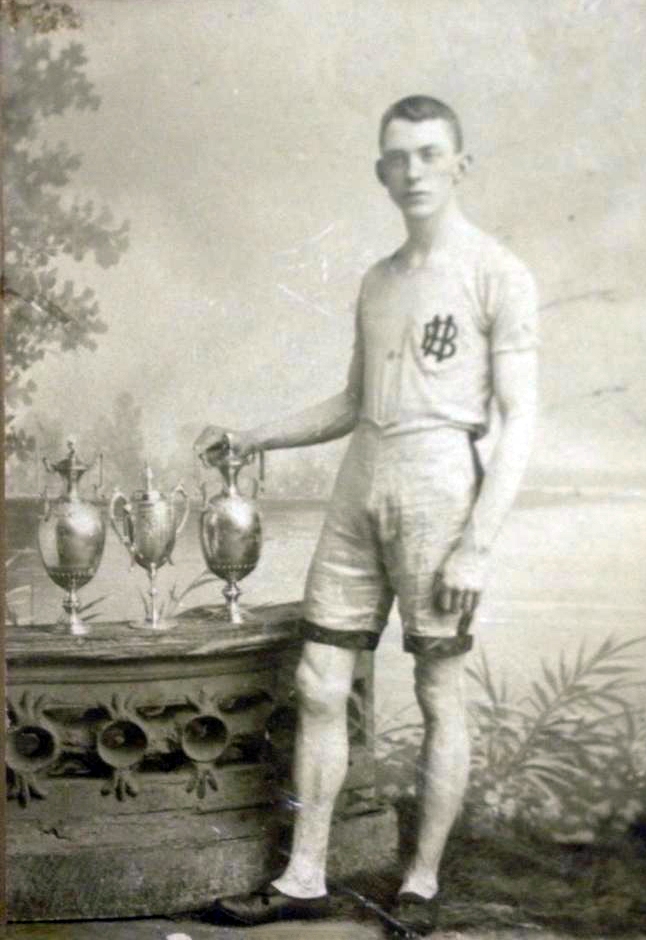 The 1902 international was back in Ireland, back at Ball’s Bridge on Saturday 19th July.   Ireland was looking to re-establish their superiority over the Scots following the defeat in Glasgow – team and individual revenge.   The report on the event in the Dublin Daily Express started … “The eighth annual athletics contest between teams representing Scotland and Ireland was held on Saturday at Balls Bridge under most unfavourable circumstances, rain falling heavily from an early hour.   It had lightened somewhat near three o’clock, the hour for starting, but a steady drizzle was still coming down when the first event was put in motion.   The bad weather had kept away the public and there was only a handful of people at the opening.   Out of the previous events, Ireland claims five and Scotland two, last year’s contest at Glasgow having gone to Scotland by the odd event.”   Before we comment on any of the athletes or events, we will show the results.

Given the scale of the defeat one might be forgiven for thinking that Scotland had put out a poor team when that was far from the case.  Note the following:

Both top class athletes and although the others were not quite in that bracket they were all good athletes.   On the Irish side the man who defeated McGough – JJ Daly – was second in the 1904 Olympic steeplechase and stayed in North America for a while thereafter winning the Canadian Mile and Two Mile championships.