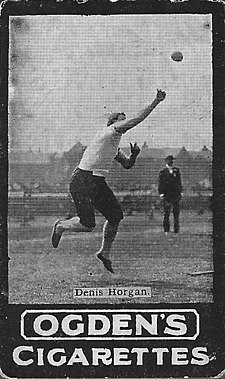 One of the names appearing with regularity throughout these international meetings was Denis Horgan of Ireland – Throwing the Hammer and Putting the Weight were his events and he formed a formidable partnership with TF Kiely in them.   He had an interesting life away from the athletics arena and it is covered by Wikipedia as follows –

Denis Horgan (18 May 1871 – 2 June 1922) was a champion Irish athlete and weight thrower, born in Banteer, County Cork, who competed mainly in the shot put.    Shortly after setting a world’s record of 48 feet 2 inches with the 16 pound shot at Queenstown,] in County Cork, Ireland in 1897, Horgan visited the U.S., and in 1900, he joined the Greater New York Irish Athletic Association, the predecessor of the Irish American Athletic Club for a brief period.  In 1905, he joined the rival New York Athletic Club.   In 1906, Horgan set the world’s record for the 28 pound shot, with a distance of 35 feet, 4.5 inches at the Ancient Order of Hibernians games held at Celtic Park in Queens, New York.   He competed for Great Britain in the 1908 Summer Olympics held in London in the shot put, where he won the silver medal.  Denis Horgan won a total 42 shot put titles during his athletic career, including 28 Irish championships,] 13 English championships (all for the 16 pound shot)[ and one American championship.   Horgan was “usually so superior to his fellow competitors that he seldom trained in any sort of systematic way, yet he showed a marked consistency of performance, in all conditions, over a period of twenty years.”

In the Scoto-Irish Internationals up to 1900 he had won the Shot Putt  5 times in 5 competitions and in theHammer he had four second places behind team mate TF Kiely.

The International had been won by Ireland on every one of the first four meetings but this time, on home soil at Powderhall the result was reversed, Scotland winning by six events to five.   The events won were the 220 yards (W Callendar), 440 yards (WH Welsh), 880 yards and one mile (H Welsh), Four Miles (J Paterson) and Broad Jump (H Barr).  Barr was a superb long jumper who had already won the SAAA Championship five times (1893, 1895, 1896, 1897, 1898) and the International once (1896) so it was not entirely a surprise when he won this one but the superb record that he set was.   The ‘Scottish Referee’ reported on the match as follows.

“For the first time since the institution of this contest Scotland can claim a victory.   Powderhall Grounds presented a fine appearance on Saturday, and the cinder path had been especially looked after for the occasion.   Half an hour before the commencement, the crowd began to assemble and there appeared every sign of a great gate.   The officials were not disappointed as the ‘gate’ turned out to be the largest of any past international in Scotland.   A stiff wind blew directly down the straight and affected the times in all races except the hurdles which were run with the breeze.

The Irishmen had a good passage across and, as usual with them, were all in the very best of spirits.   After the photographing of the teams and the officials had been gone through, excitement began to rise in view of the racing.   Proceedings began with the Mile ….”

There followed an account of every event but we will only reproduce Barr’s record in the long jump as the reports were all quite lengthy. Going in to the event Scotland was one down to Ireland with only the broad jump and four miles events to come.   If Barr won, then the score was 5 events each with the whole match depending on the four miles.  Of the broad jump, it had this to say.   “The long jump was looked upon as a certainty for the Ritish champion, WJM Newburn.   After an effort however he broke down and had to retire.   He would have had to beat his best to have beaten Hugh Barr who proved to be in grand form.   P O’Connor (Ireland) cleared 22′ 11″which is 8″ further than Newburn’s Scotch record made in the same event at Powderhall in 1897.   Hugh Barr started by equalling his native record of 22′ 1″, and then with a grand effort put in a lovely jump, and it was at once seen from the stand that something exceptional had been done.   A great burst of cheering went up when it was found that he had beaten all Scotch records doing 23′ 2″.   He had a few more tries but could not further improve on this.   So Scotland won an event least expected and brought the two countries once again on level terms.”

The match had indeed been hard fought with the lead changing hands all the way through.  Scotland won the first event (Mile), Ireland the second (Shot) to make it one apiece, Ireland then won two more (100 yards and high jump) to make it  3 – 1 but Scotland came back with two of their own (220 yards and half mile) to be equal with 3 events each.   Ireland then won the Hammer and the hurdles to make it 5 -4 before Scotland won the quarter-mile and the long jump.   Into the Four Miles, three a side for this race, which Paterson won by 30 yards to take the match for Scotland.   .

The matches had been a success, of that there is no doubt, and the taste for them was growing.   The Coatbridge Express of the same date as above – 19th July 1899 – picked up on this and reported on it. 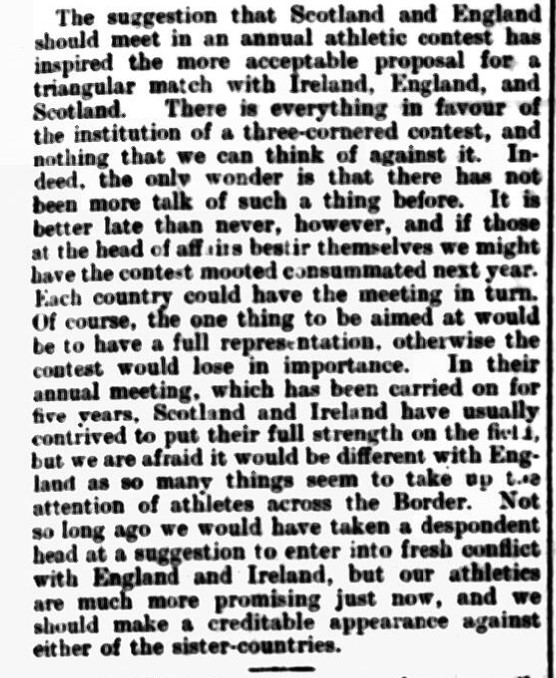 The Triangular International would come to pass but not until 1914.

TF Kiely has been mentioned in almost all the international matches, usually in the hammer but he also won the 120 yards hurdles for his country.   He was a quite amazing athlete whose story has been told in the following book.

Tom Kiely strode majestically through the Irish sporting scene, brushing aside all challengers, collecting championships by the score, smashing Irish, Scottish, British and European and world records on all sides. He created a blazing chapter of sporting history that still burns as brightly today as it did in the early years of the century’ (David Guiney, Ireland and the Olympic Games)

Thomas F. Kiely was widely regarded as the greatest all-around athlete in the world in the 1890s and early 1900s. He was never beaten in an all-round competition and many would regard him as the father of the modern decathlon. His career is interwoven with a range of events and issues in Ireland – he played a seminal role in helping the GAA establish itself before hurling and football were really widespread, and in shaping how Ireland coped with the dark days of the Parnellite split. In many respects, Kiely became a national hero at a time when the country needed one – a sort of blend of Cuchulainn and ‘Mat the Thresher’he was intrinsically linked to the rise of cultural nationalism. He was nicknamed ‘Erin’s Champion’. Kiely played a major role in establishing Irish identity in international sport and was the first Irish sporting superstar. Kiely’s story is full of wonderful anecdotes and details of his personality, capturing his status but also his humanity. 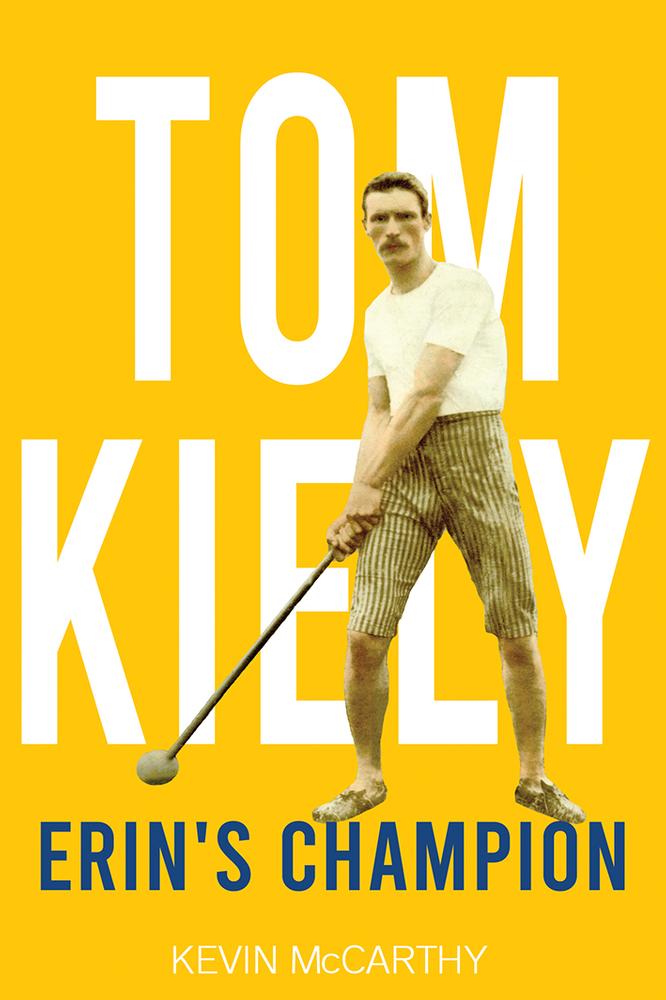 The sixth match in the series took place on 30th June 1900 at Cliftonville Park in Belfast.   Scottish hopes were a bit higher than for the previous visit to Ireland and the team looked good with a stronger squad in the more technical disciplines plus Paterson and Mill in the distance events on the track.   The report in the Cork Examiner on the Saturday began – “Belfast is bathed in sunshine today, a welcome change to the heavy rain that fell yesterday.   The track at Cliftonville is not in favour with the Scots, the surface is loose, and as it is only 370 yards in circuit, four and a half laps are required for the Mile.   McInnes is an additional absentee from the Scotch side but this makes no difference as Kiely and Horgan were certain of the heavy events.   A heavy burst of rain fell before the start and made the ground sodden.   The crowd was affected, about two thousand being present chiefly in the covered stand.   The last race is the four miles, timed for half past five Irish time, so that it will be nearly half past six before the meeting finishes.”

The ‘Glasgow Herald’ lamented the performances of Paterson who was running in the half-mile and mile and finished second in the mile and was unplaced in the half mile.   They pointed out that if he had won his two encounters, Scotland would have run out winners in the contest.   Of the newcomers to the team, RS Stronach in the hurdles was praised highly despite being beaten by a very small margin.   Another talking point was the selection of JJ McCafferty for the Irish team in the Four Miles.   McCafferty was a member of West of Scotland Harriers.

The following year was Empire Exhibition year in Glasgow and the match would be held at the Empire Ground, Gilmorehill, Glasgow on 29th June.