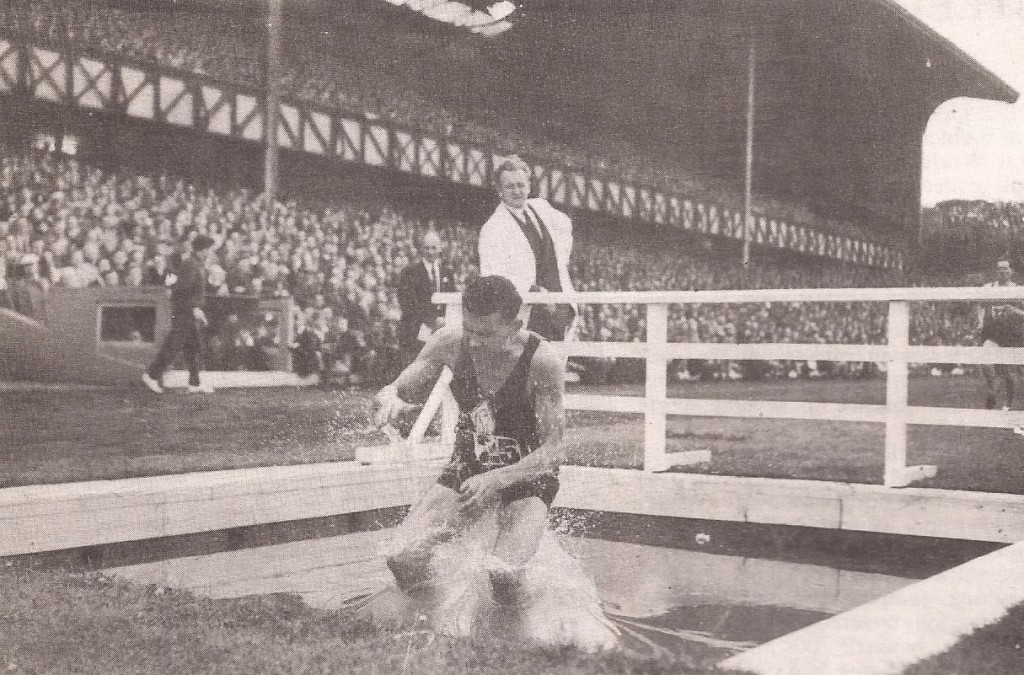 All athletes keep records.   Certainly all serious athletes keep records and most have their training diaries kept for decades after they stop running.   Nowadays runners have things strapped to their arms, wrists or ankles that keep their records for them in so much detail that it is pretty well meaningless to them.   But we can look at that kind of thing separately.   We are talking here about race results.   Race results issued on the day were a rarity – the ‘News of the World’ used to have results of the Edinburgh to Glasgow typed out and reproduced on a Gestetner available to all wanted a copy after every two stages of the race.   Years later such events as the Balloch to Clydebank and Clydebank to Helensburgh had race results posted out to those wanting them the following Tuesday or Thursday and this was developed by the Tom Scott and Allan Scally Relay races.

Before that, runners had to wait till after the last man had finished and the results posted on a board in typed or, more often, hand written form.   Then the runners copied out what results they wanted and either transcribed them into a training diary or pinned them up in the clubrooms the following Tuesday.   Often enough, one runner was designated to wait and ‘get the results’ while the remainder of the club team disappeared off home.   What was wanted differed with the club and the individual.   Most athletes wanted to know what the result of the race (team and individual was), they wanted the results of all of their own club members and teams, and usually they wanted the results of their own close rivals from other clubs.    Just for reference.   But there was one runner from a Glasgow club who wrote out all his main rivals and targets-to-beat in order on a piece of paper and then on the night before the race stuck a pin in the top name and screwed it in and round about.    I don’t know how often it worked but the runner became a minister of religion!

What we have here are results that were taken home and transcribed into a notebook at home by Springburn’s Danny Wilmoth.   First there are his track races: competition was real and earnest and runners competed as often as possible over the summer months and travelled to wherever the race was to be held.   The picture above is Danny coming out of the water jump at the steeplechase at Ibrox. 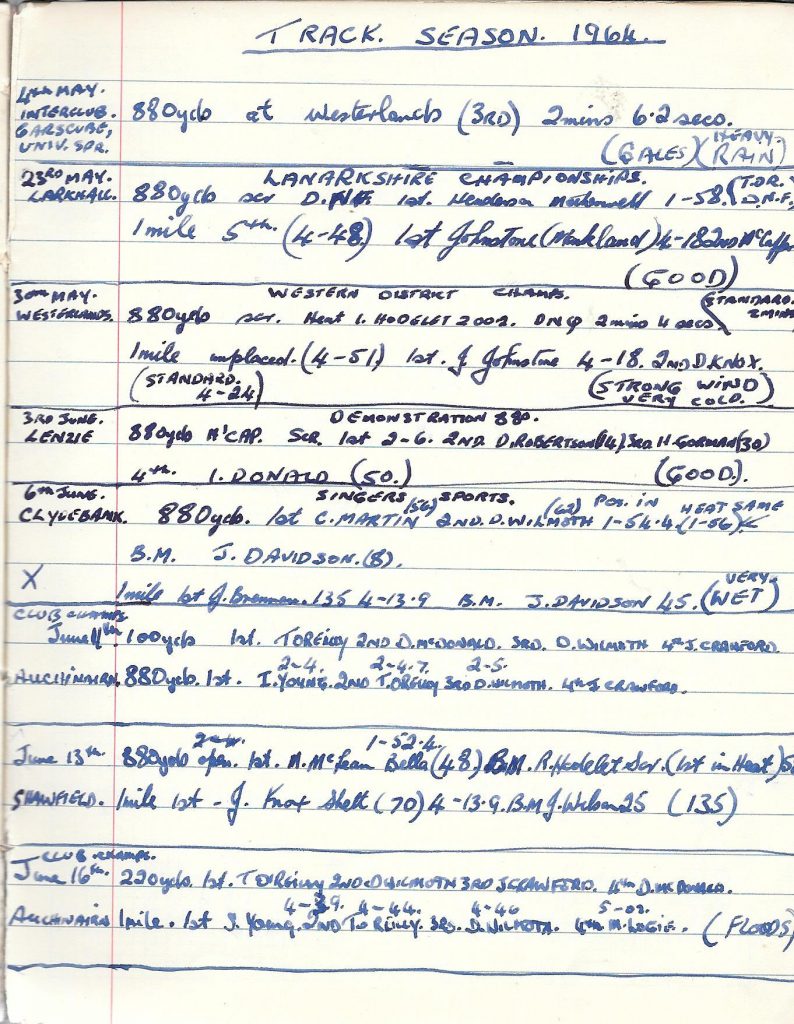 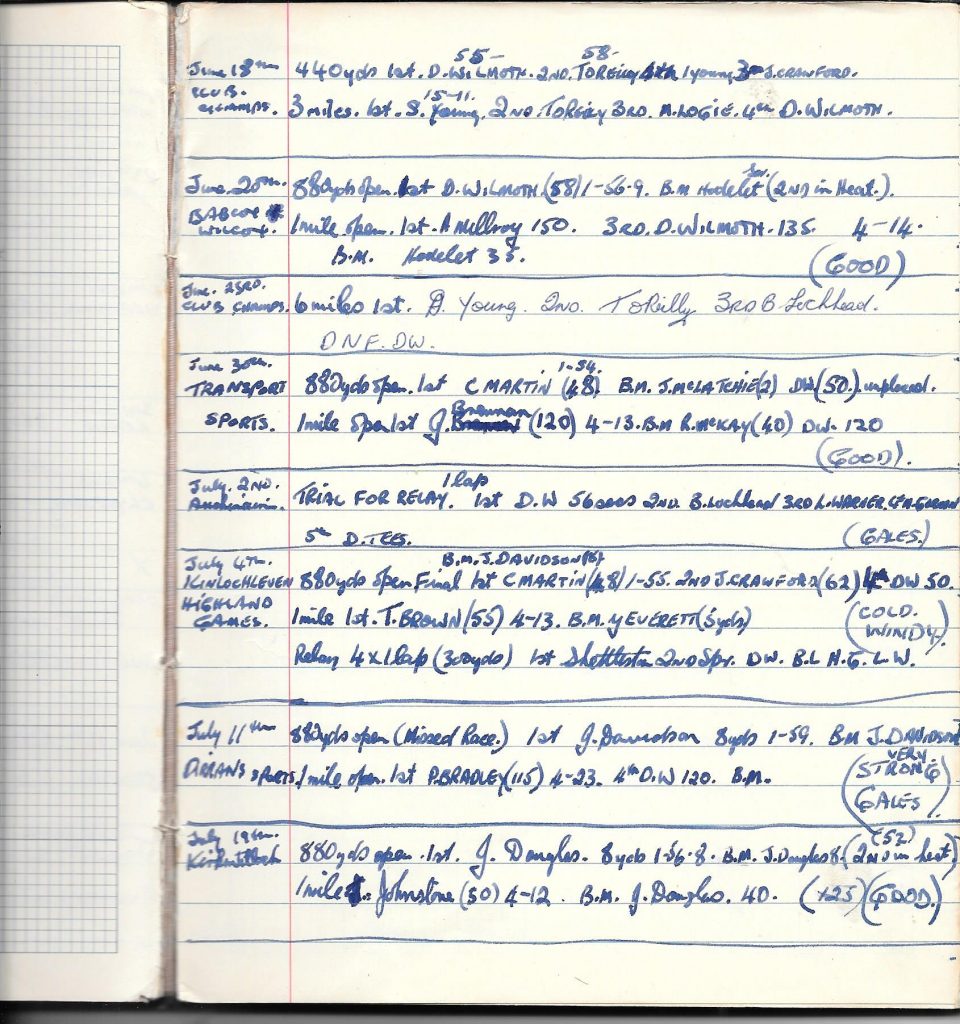 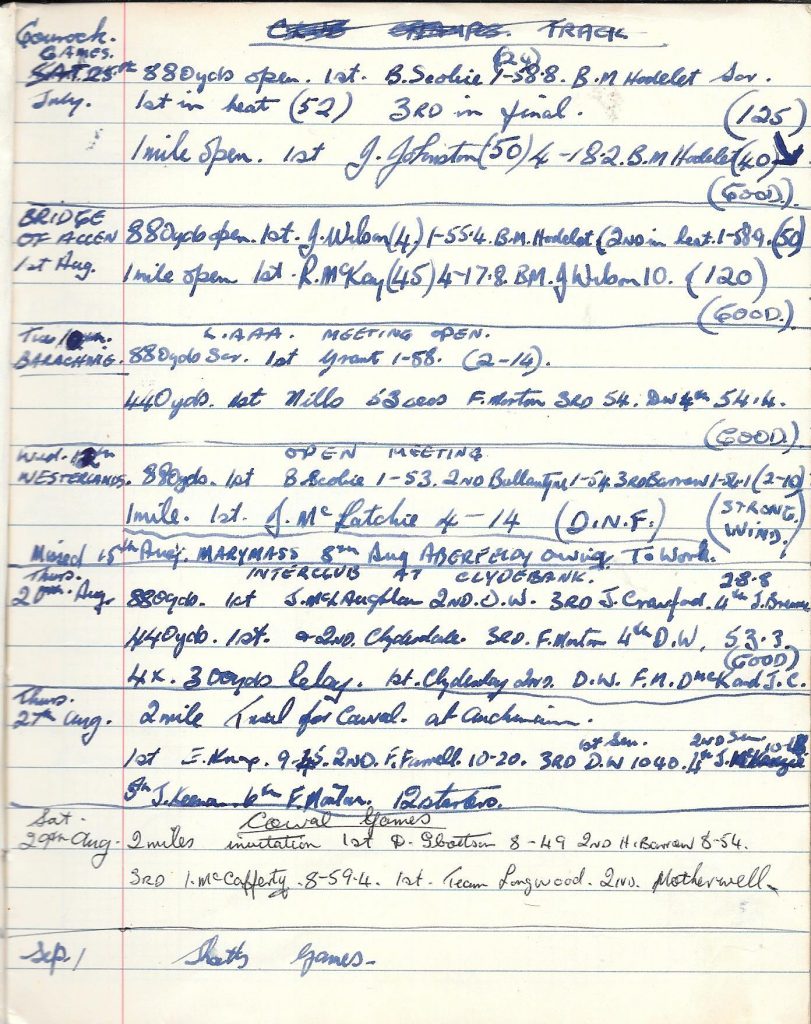 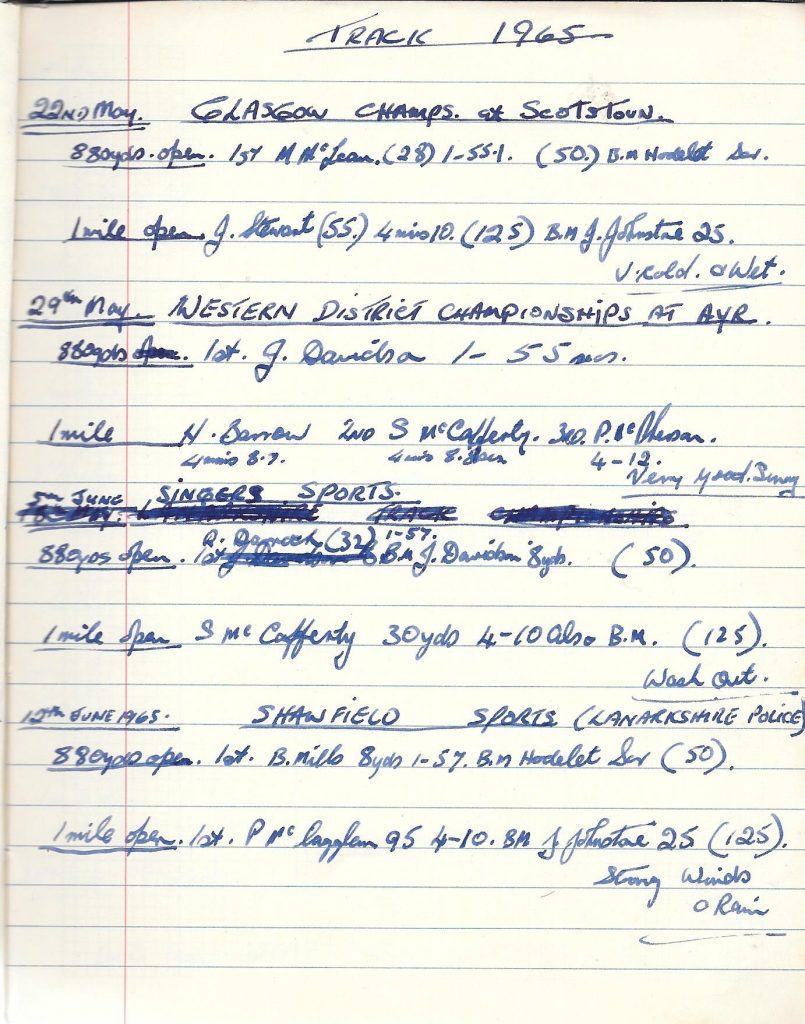 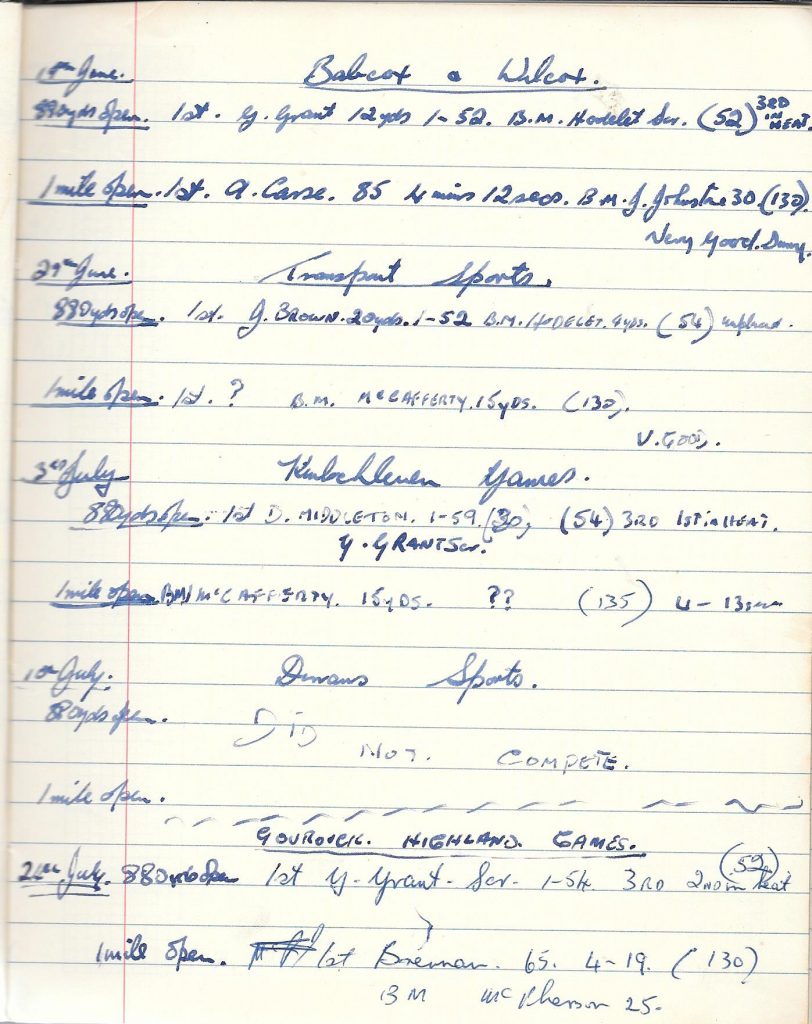 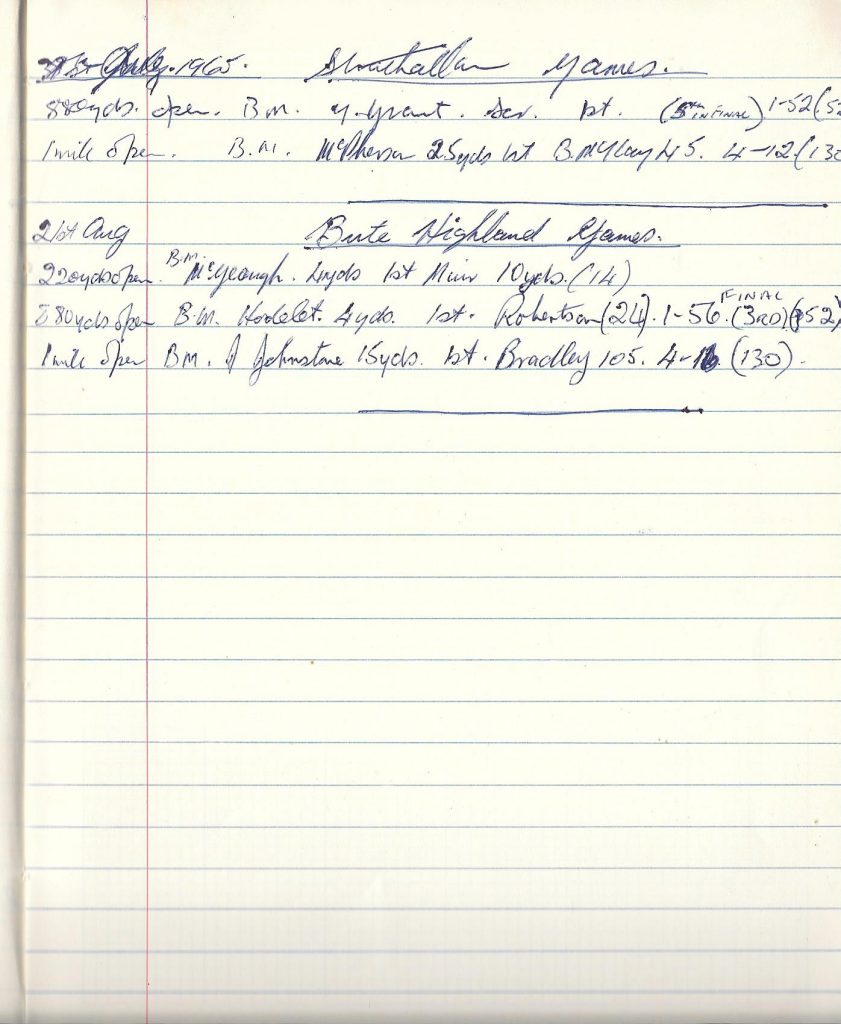 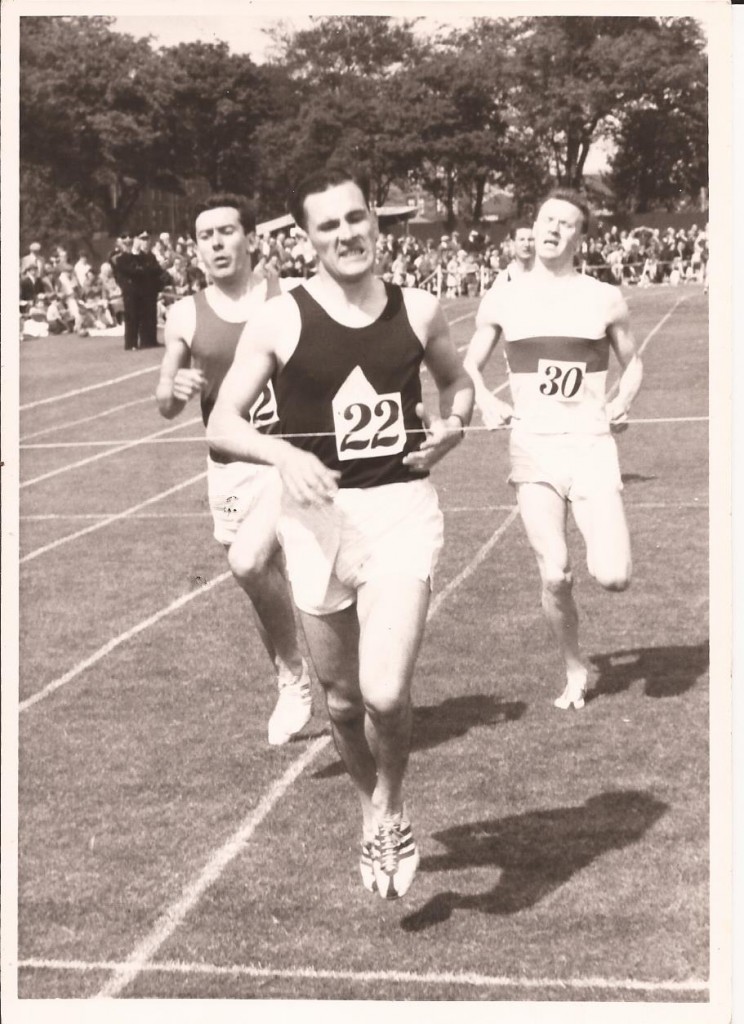 Now for the cross-country results where teams counted, possibly even more than individuals in some cases and these details were noted.   There were not as many races on the calendar but they all counted.  Clubs held trials to pick teams for the major races such as the McAndrew Relay (the VPAAC trial for places in that relay were said to be harder than the race!) and the Edinburgh to Glasgow.   Results for the E-G trial are included here. 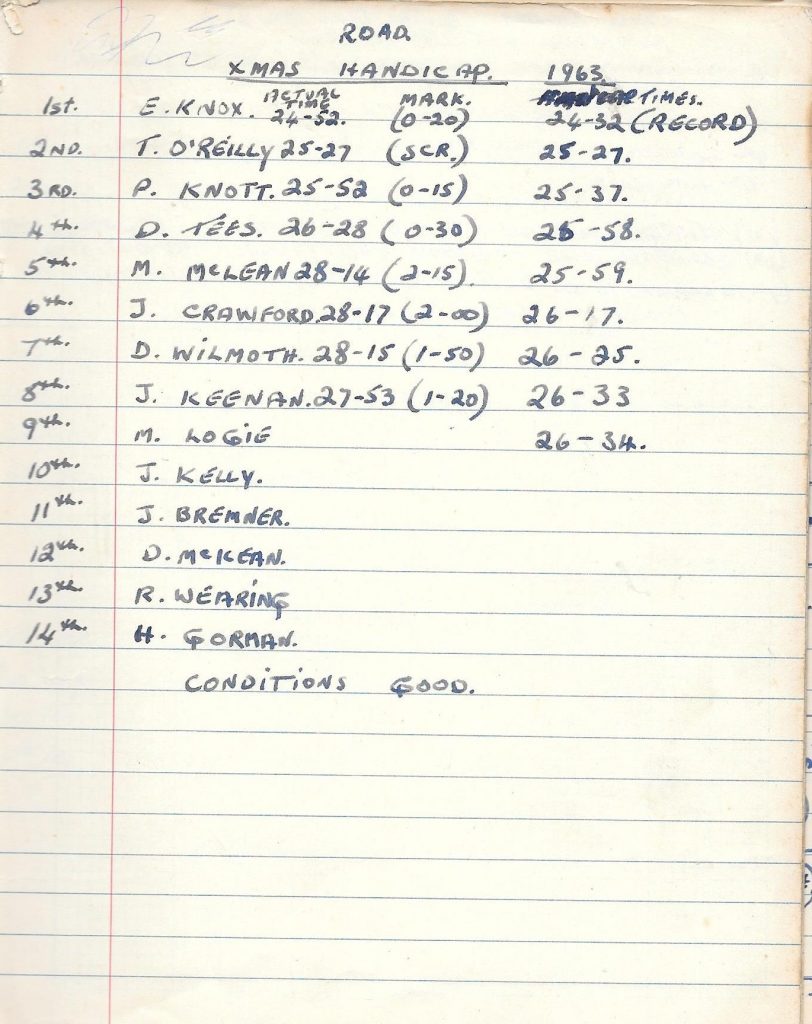 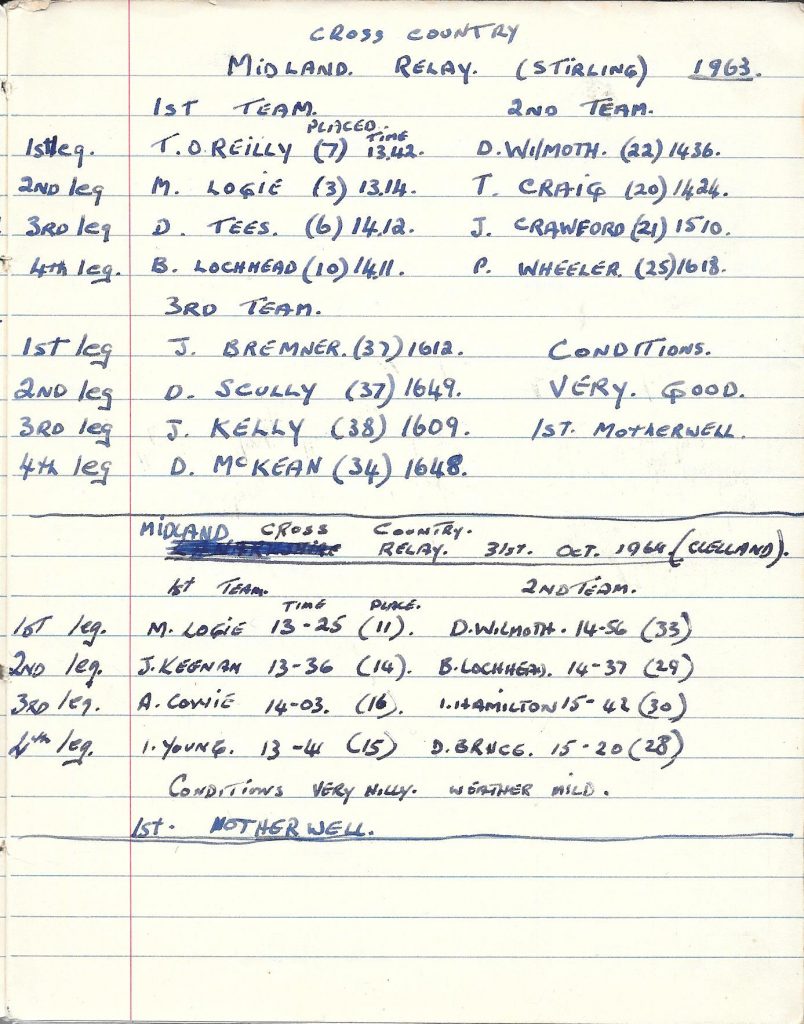 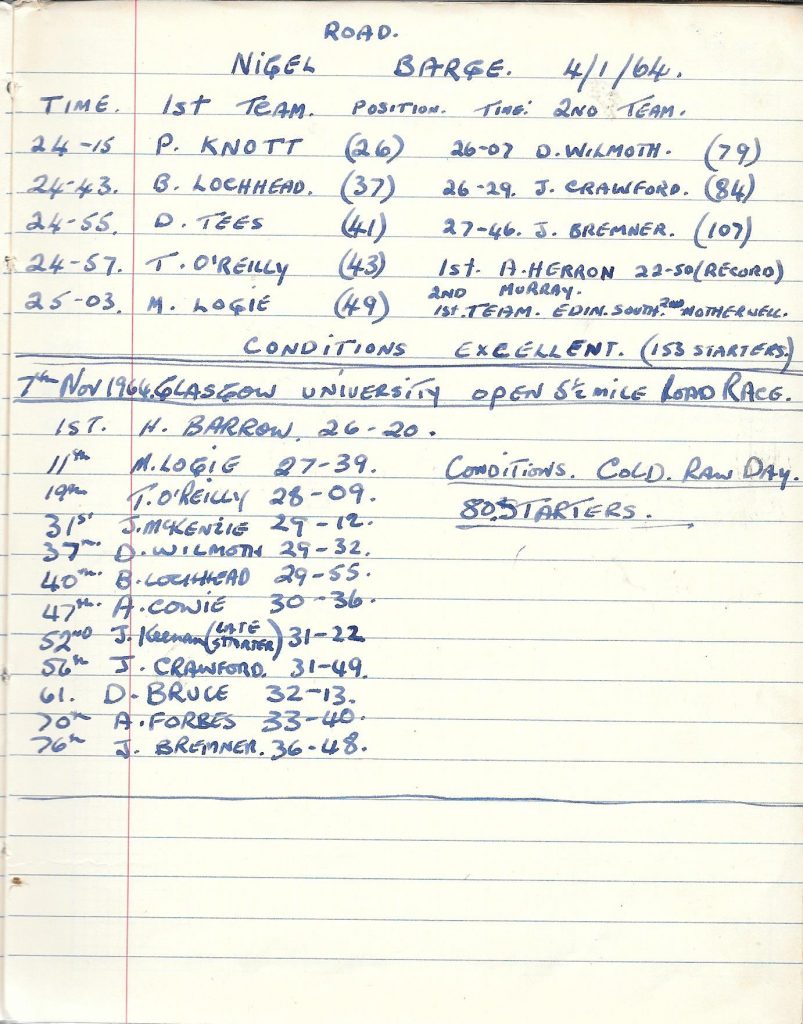 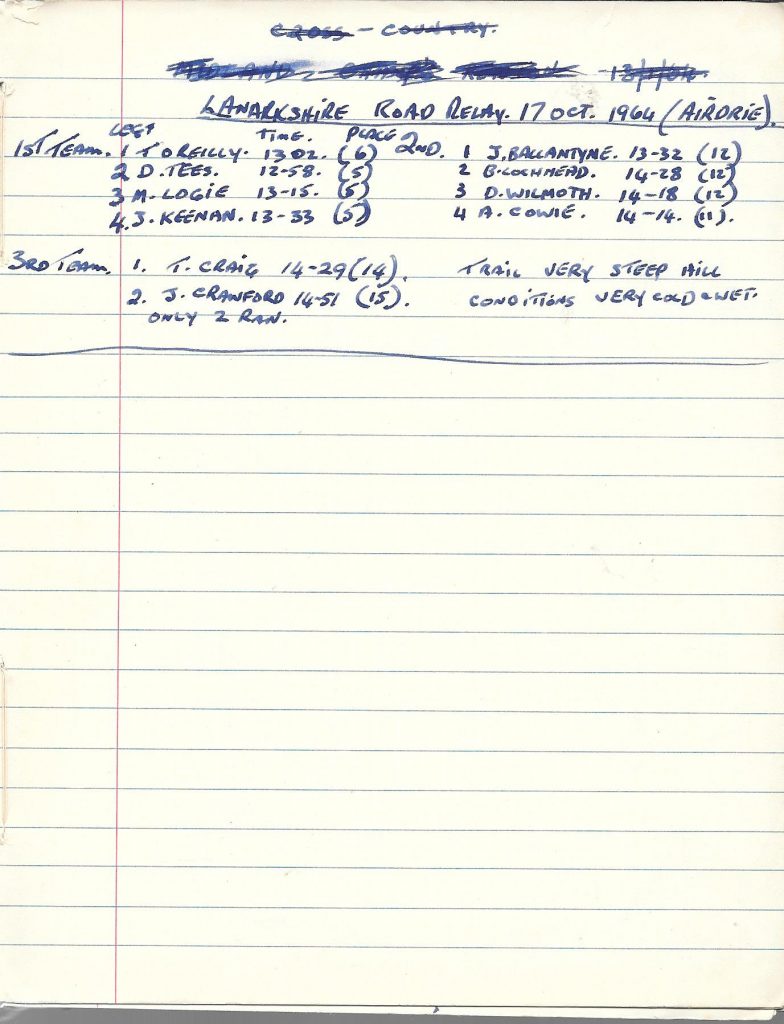 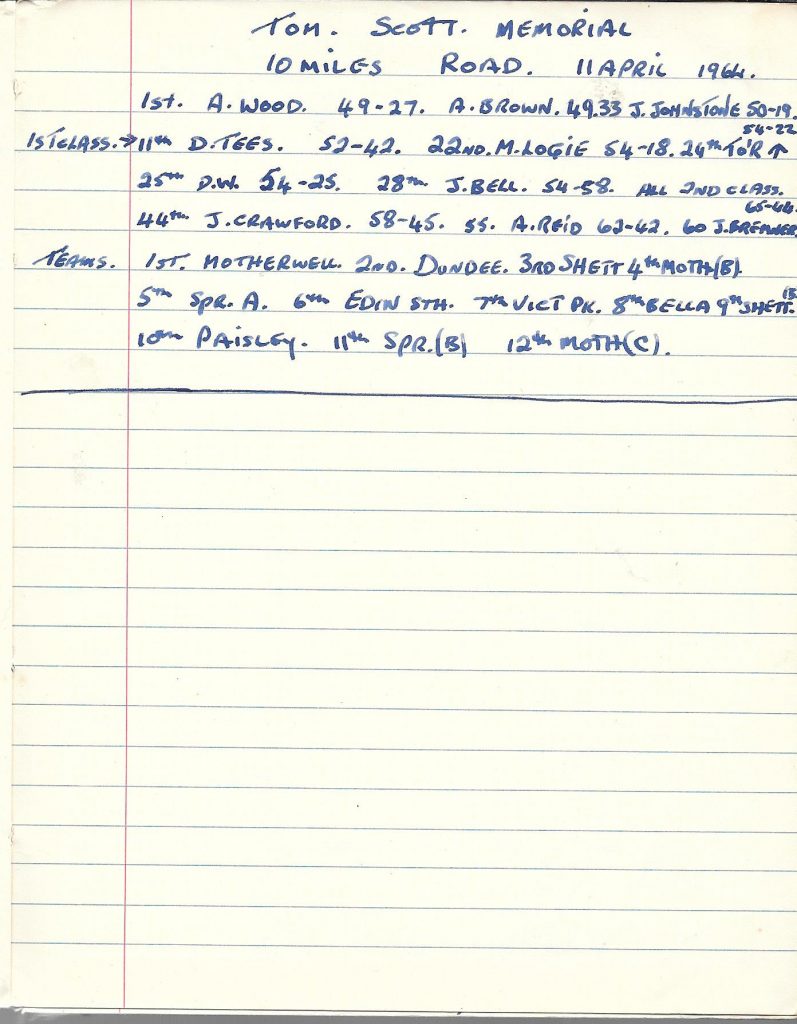 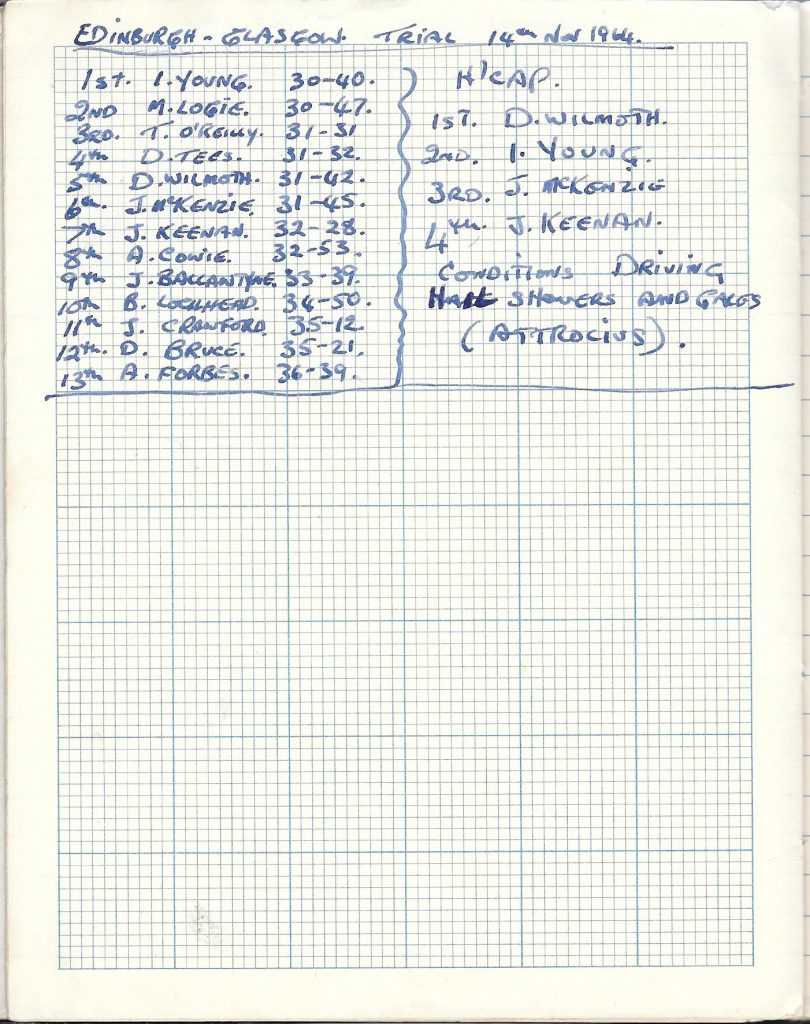 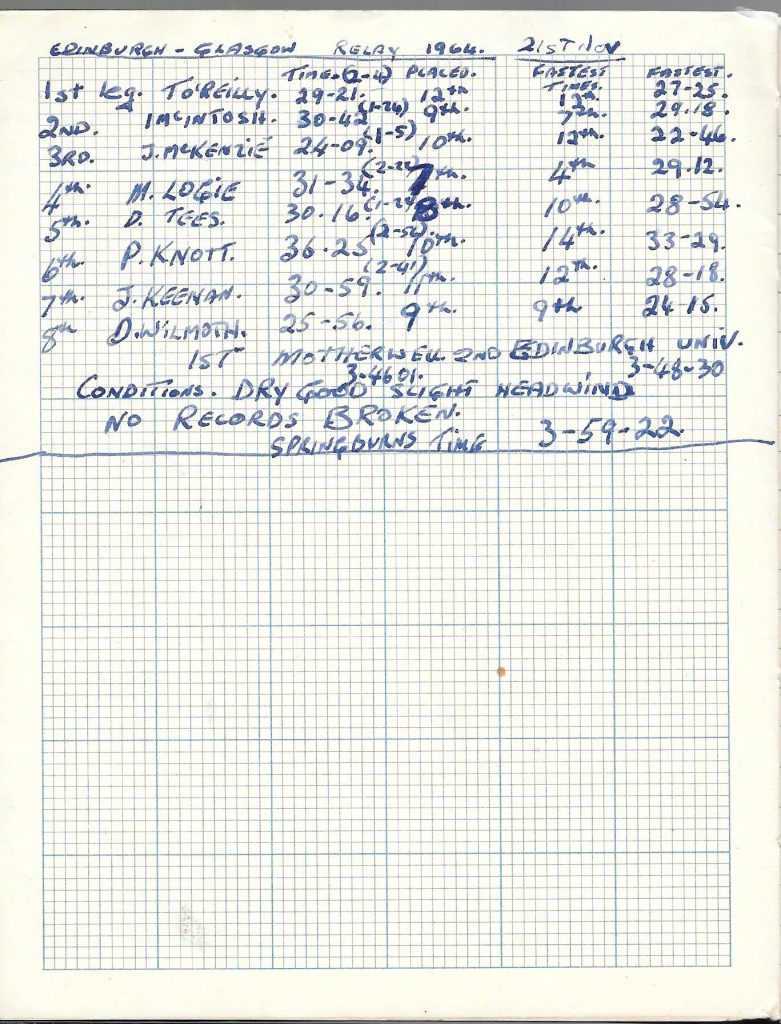 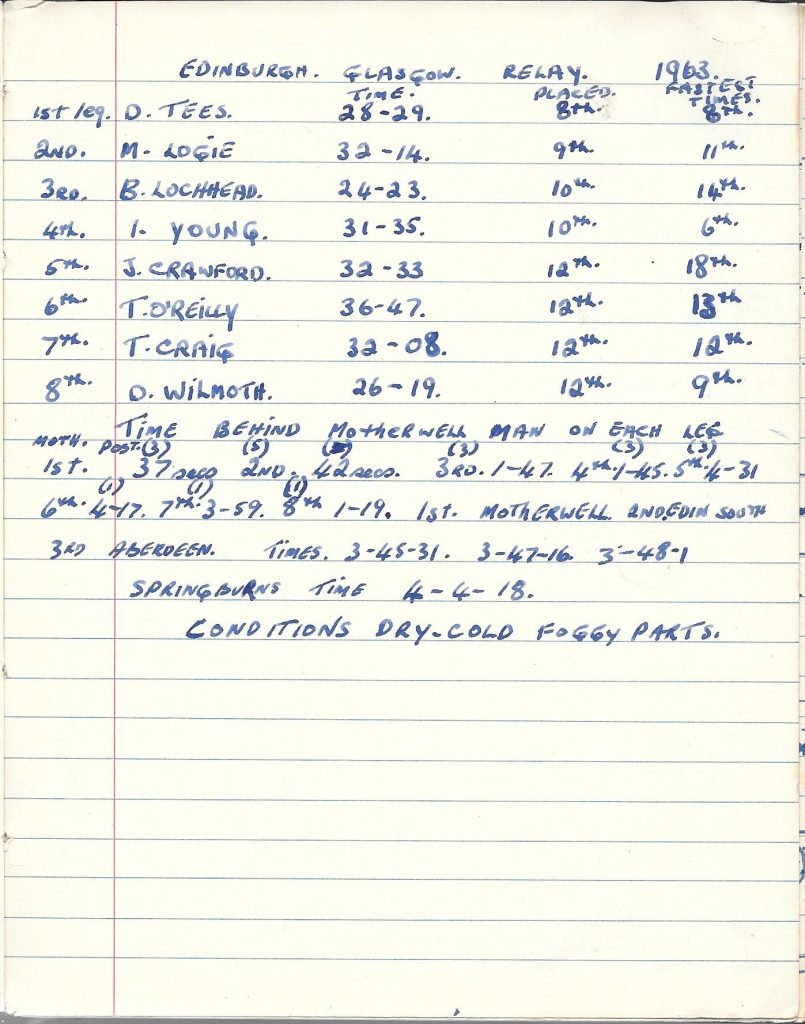