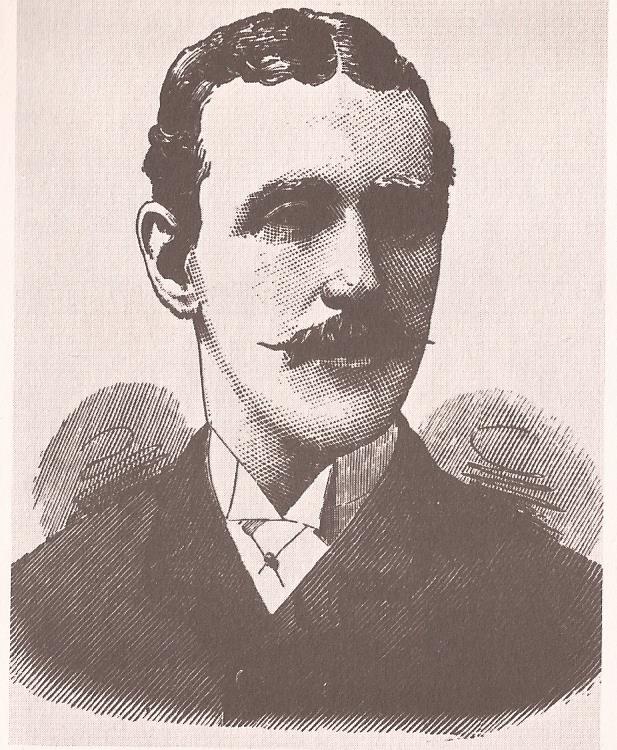 WA Peterkin: Winner of the first ever SAAA 100 yards and 440 yards championships

There were four meetings on 2nd June, 1883, two in Edinburgh, one in Glasgow and one in Kilmarnock.   The Glasgow one was at the Shawfield grounds amd was a professional meeting.    It occurs to me that in the early 1950’s the Clyde Football Club Sports, held at Shawfield, were professional in nature and the amateur meeting there was the Lanarkshire Police Sports.    Were the Clyde Sports a continuation of these nineteenth century pedestrian events?   Whatever the situation, there were 1000 spectators on this first Saturday in June to see the 130 yards sprint and the half-mile handicap.  There were fifteen heats of the sprint.  I quote from the report: “The contests in the sprint were somewhat disappointing , and in several of the heats the non tryers were conspicuous, but the half-mile eas really a capital race, upwards of 32 pedestrians facing the starter.   …   Half-mile handicap prizes were £10, £1:10:00 and 10 shillings.   1st  T Stott, Newton, 70 yards;  2nd A Bird, Glasgow, 80 yards;  3rd G Wilson, Glasgow, 70 yards; 4th A Young, Falkirk, 30 yards.”

“ATHLETIC GATHERING IN EDINBURGH:   About 60 persons assembled at Edinburgh Royal Gymnasium on Saturday to witness the contests for a number of events which were announced to take place under the auspices of the “Scottish Athletic Society”.   Being the first championship meeting of the Society, most of the visitors anticipated that the ‘best records’ in the various arrangements would have been beaten.   The meeting was very tame, and was prolonged to a wearying extent – the performance lasting from four o’clock until half past seven.  ”    There were about sixteen events, most being field events, track consisting of 100 yards, quarter-mile, Mile and Two Miles.

“EDINBURGH INSTITUTION SPORTS: The annual sports in connection with the Edinburgh Institution came off on Saturday at the Institution’s grounds at Warriston, Edinburgh, and the weather being fine were witnessed by a large concourse of ladies and gentlemen.  ”     There were thirteen events, all but one confined to either pupils or former pupils.   The exception was a half mile, open to amateurs which was won by a Canadian from Montreal AAC.

“KILMARNOCK:   Sports under the auspices of the Kilmarnock Bicycle Club were held at the Rugby Park on Saturday.   In the bicycling competition, Barton of the ESBC carried off no fewer than three first place honours.   Fortunately the weather was very favourable and the track everything that could be desired.   About 2000 spectators were present.”   The programme was entirely made up of cycle races except for a tug of war, 100 yards and quarter mile.

Four meetings. one professional, two amateur and one mainly a cycle meeting.

There were four meetings on on the following Saturday, June 9th, too but the only one at the same venue as the first week in June was at the  Shawfield Grounds where the events were the  130 yards and the One Mile handicap where the prizes were £10, £1:10:0 and 10/-.

Ayr was always a good athletics venue and the Ayr Academical Club’s Annual Sports were held on this Saturday.   It was a very big meeting and popular with competitors and spectators alike.   “These sports took place at Springvale Park on Saturday and were highly successful.   The arrangements were of an elaborate description, and the programme was an excellent one.   The weather was very fine and there was a large crowd of spectators – a greater number than had turned out for anything of the kind for a number of years and every seat in the grand stand was occupied.   The programme comprised twenty two events, of which four were bicycle races, and the bicycle races were probably the most exciting on the card. ”   The lengthy report went on to detail many of the events completed on the day when there were many competitors from all the University Athletic clubs, former pupils clubs, plus several football clubs such as Queen’s Park FC, Vale of Leven FC, West of Scotland FC, and other clubs like 1st LRVAC and so on.   The winning competitor in the Two Miles Flat Race handicap was A Findlay of Ayr FC who would go on to win the first ever Scottish Cross-Country championship in the colours of Clydesdale Harriers.

The Hawick Borders Games always drew a good number of athletes but these were mainly local from the other Borders towns with some few athletes coming from further afield.   Most events were running events and there was not only a mile race, there were two races over the mile and a half distance.   No times were given although distances were noted for the throws and jumps.

There were several meetings held over the summer that called themselves ‘National Games’.   This particular weekend, it was the Greenock National Games.   “Favoured by splendid weather the seventeenth annual tournament of national games at Greenock came off with great success at Academy Park on Saturday afternoon.  The arrangements made by the committee were most complete and everything worked smopothly.   It was estimated that 5000 people were in the park at one time.   There were in all 27 “events” on the programme including exhibitions of tasks with sword, bayonet, Indian clubs and quarter-staff. ”    It continued with comments on several events with the two miles race with 16 runners  written up as the race of the afternoon.   No teams, clubs orother organisations were listed – only the competitor’s town after the fashion of the professionals.

It can be seen from the meetings so far that there were plenty of openings for amateur athletes to get good competition before decent sized crowds.   With no affiliation essential before competing, any grouping, be it a football club, a military regiment, a cycling or cricket club, could enter its members for these sports and games.   It was not a situation that would last for much longer – the first ever SAAA championships would take place on 23rd June 1883. 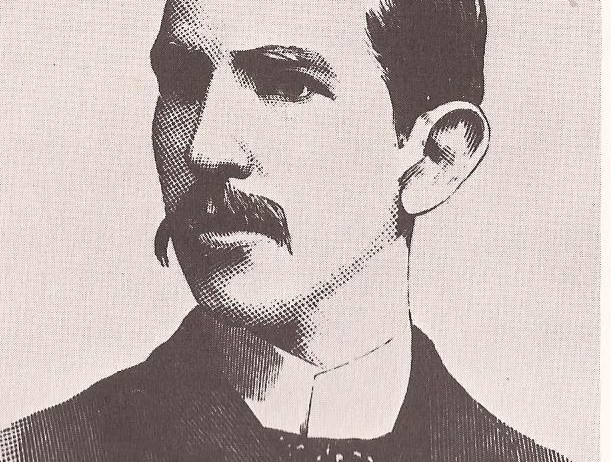 DS Duncan: Winner of the Mile in the first ever SAAA Championships

On 23rd June, 1883 there was the usual weekly meeting at Shawfield Grounds plus two meetings organised by Pollok FC and Kilbirnie FC  but the real story was the first ever National Championships organised by the Scottish Amateur Athletic Association.   The report read:

“The first championship meeting under the auspices of the Association was held on Saturday afternoon at Powderhall Grounds, Edinburgh, and proved a very successful meeting.   The weather being all that could be desired, about  ? ladies and gentlemen witnessed the proceedings, which were greatly enhanced by the band of the Gordon Highlanders dispensing a splendid programme of music.   Most of the events passed off without a hitch excepting the pole jump in which Mr Hodgson while attempting to jump 9′ 9″ came to grief, the pole he was using snapping when he was almost over.   He fell heavily on his shoulder but soon recovered.   The final of the 100 yards was a splendid sight.   A capital start was effected, and Smith about half-distance was leading by a yard.   Here Peterkin crept up and gradually reducing the space passed him just at the tape and won by 5 inches.  ….   ”

The complete results with a note on the events contested can be found at www.anentscottishrunning.com/track-championships.   The amateur era had pretty well arrived although it would be another two years before amateur clubs were to take part.

Nevertheless on this day ‘an unusually large crowd of spectators’ attended the professional event at Shawfield where there were only two events on the programme – the sprint whose first round was held a week earlier (prizes £15, £2:15:0, £1:10:0 and 10/-) and a one mile handicap (£20, £5, £1 and £1) race.   Given that the amateur movement was driven in part by the abuses of the pro system which included professionals impersonating amateurs, non-trying in races, betting while the races were in progress, it was clearly far from dead.

At the Pollok FC fixture where there were 700 spectators, the prize winners all came from football clubs – Queen’s Park FC members were the biggest winners, but others were Dumbarton FC, Abercorn FC, Johnstone Athletic FC, Govanhill FC and, of course, Pollok FC.    And at Kilbirnie, no club affiliation was quoted, simply where the athlete came from which seems to indicate a professional meeting.

The month ended with a Saturday fixture at Shawfield but this time there was a difference.   “The West of Scotland National Games and Athletic Sports took place at Shawfield Grounds on Saturday.   The weather was splendid and between five and six thousand spectators were present.   A very varied programme was provided, which in addition to the national games of quoiting, wrestling, hammer throwing, pole-vaulting, dancing, etc, also included a more than usually seen number of athletic events.”   So far, so good but then it spoils things by saying that the prizes for the 120 yards hurdles were £3, £2 and £1.    It would have fourteen heats with the final to be run the following Saturday.   Read on through the report and the meeting, which was indeed varied and interesting, and you will see prize money listed for several of the races with the going rate seeming to be £2, 15/- and 5/-.

The only other meeting on the last Saturday in June was the Arthurlie Cricket and Football Club Amateur Athletic Sports.   Unlike sports quoted earlier which featured the drop-kick for distance with a football, this sports had a place-kick which was won by D Cunningham of rthurlie with a distance of 154′ 9″.   There were also several names on the programme who would feature as club members in another couple of years – eg W McAuslan from Dumbartion who would be a member of the Clydesdale Harriers Dumbarton section.   Many football teams were represented and the furthest travelled prze winner came from Granton.

Was there a demand for athletics from the public in 1883?   Certainly, we only have to look at the thousands who turned out to watch some of the meetings, whether they were amateur or professional.   Was there a demand from the competitors for such meetings?   With over a dozen heats in some meetings, een over two dozen in others, there was a clear demand for them.    Now in 1883 there was a national amateur championship run by the SAAA.  The competitors came from Universities and fee-paying schools, from football, cricket, cycling, rowing and other sports clubs.    It was only a matter of time before purely athletic clubs would appear on the scene.