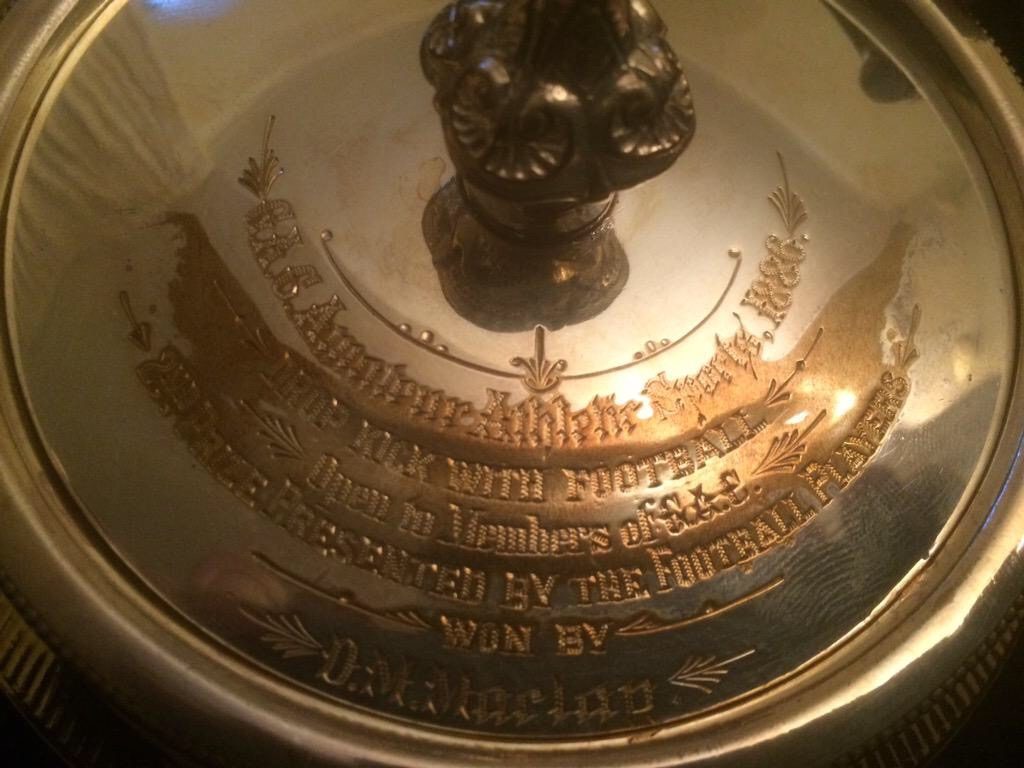 The first Saturday in May, 1883, was the fifth of the month and sports/athletic meetings were held at Shawfield Running Grounds, at Kelvingrove where the Glasgow Police Sports took place, at Kelvinside where the Glasgow Academical Club held their meeting and at the Dollar Institution.   Despite the heading being ‘Athletics’ the Shawfield programme contained two events:  the final of the peds 300 yards, the preliminaries of which had been held the week before, and a One Mile Handicap.   The Police Sports included, in addition to a selection of athletic events, Highland Dancing (won by John McCallum from Lanarkshire), wrestling, a ‘catch the thief’ race for policemen dressed in day uniform, three legged race and tug of war. The Police Sports were one of the very last to adopt the amateur code, being professional right up to the late 1940’s.

The ones most like current meetings were the two school sports meetings –  all amateurs completing a programme of purely athletics events.   The Glasgow meeting had many open races in which some university and cricket club members took part.  The report on the Glasgow Academy Sports read: “The annual sports of the Glasgow Academical Club came off on Saturday at the ground of the club at Kelvinside.   In consequence of the heavy rain in the forepart of the day the ground was in a soft condition – unfavourable for the work in hand.   A large and fashionable gathering graced the field the whole of the afternoon and the various events were watched with evident interest.   The band and pipers of the 51st Highlanders were present and dispensed selections of music between the various items on the card.   At the conclusion of the meeting the prizes were presented to the winners by Mike Cross.”

There were over 20 events including several open events with competitors coming from as far afield as the Ulster Cricket Club and including such as 1st Lanark Rifle Volunteer Club AC and University and Old Boys clubs.   The Academy Sports are one of the longest running in the country, having been started in 1866, only Edinburgh Academy (1858) and Royal High School (1864) with Merchiston also starting up in 1866.

In Dollar, other than a half-mile for FP’s, the events were all for school pupils.   It should be noted that the programmes for the latter meetings were the longest while, true to form, the Shawfield meeting only had a couple of events but a crowd of approx 2000. 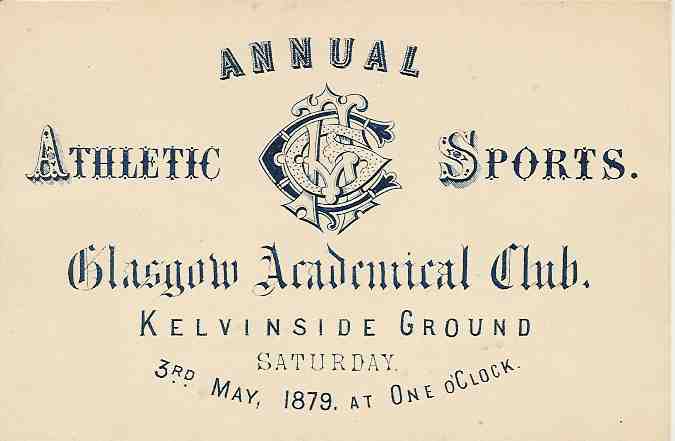 The Academicals Sports are one of the oldest in the country.

Several of the Academicals took part in the Glasgow University Sports at Gilmorehill on 19th May – they even had one of the four teams in the tug of war with the University, the Junior Clyde Yacht Club and the Southern FC, an event which the host team won.   Events included a drop kick (football) for distance with the winner clearing 130′ 10″, putting the cannon ball, pole vault, two mile bicycle race, high jump, throwing the hammer, 100 yards flat, quarter mile flat, half mile flat, one mile flat, 120 yards hurdles and tug of war.   All of the running events as well as the two miles cycle race had open races and confiend races.   It looks like a very interesting meeting indeed.

At Shawfield, the professional meeting, there was the final of the 120 yards from the previous week, a half mile and a quarter mile race for a first prize of £18.   The crowds at Shawfield are always given – this meeting had 3000 in attendance – but no figures are given for University or Schools meetings.   Three events at Shawfield but around two dozen at Gilmorehill.

The last weekend in May had the Helensburgh Larchfield Sports and the Annan FC Sports.   Organised by the Helensburgh Academical Club at Ardencaple, these were attended by a large and fashionable crowd.   21 events, all athletic events that we would recognise, were contested and the Bonhill Band played in the intervals between events.   The annual Annan FC Sports were being contested for the second time and one might have expected the drop kick to be on the programme, but no,  there were only running events plus a running high jump.