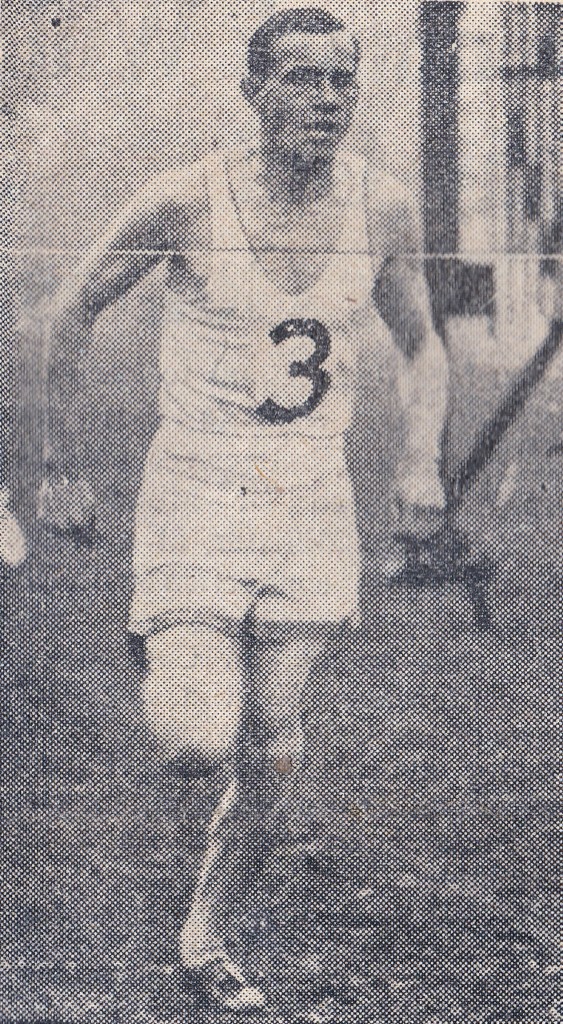 The university athletics season began on 19th April. 1930 at Westerlands with the first of a series of ‘training meetings’ held by Glasgow University on what was reported to be a very windy day with the javelin event cancelled because of it.   There were four events scheduled – 75 yards, half mile, long jump and javelin; they were were all handicapped.   The second in the series was on the Wednesday afternoon and 200 yards, 2 miles, hammer and broad jump were on the programme.   There was another such meeting on the Saturday with events being 120 yards, one mile, shot putt and high jump, all handicapped.   here was a mid week meeting on Wednesday 30th April when Robin Murdoch was the star of the show, as he had been on the Saturday, and the events were 80 yards, half mile, discus and broad jump.    Then on 3rd May the events were 80 yards, 440 yards, javelin and high jump.   The fields for the various events were reported to be much bigger and again Murdoch was the real star – he won the short sprint and only failed to win the 440 yards because of the impossibility of breaking through the big field.   By now others were starting to get organised for the summer – obviously the schools were gearing up with George Watson’s and Dollar Academy having their sports and Maryhill and Shettleston Harriers holding their annual field days.   The final GUAC training meeting was held on 10th May and the events were 80 yards, one lap (350 yards), discus and pole vault.   The actual championships were to be held the following week and enthusiasm was running high.   RAN Lapsley had acquitted himself well in the sprints and field events, Robin Murdoch was top-dog among the sprinters so far and NM Glen had run well among the distance runners.   The other universities had been following similar preparations for the summer’s sport and Saturday, 10th May saw not only Glasgow but also  Aberdeen had athletics championships.   On Friday 9th May there had been a special meeting held in Edinburgh.   Edinburgh University was arguably the strongest athletically of the four universities and this would have been a move to make the section even stronger.   The Glasgow Herald report read

On Saturday 17th May, 1930, the headline in the ‘Glasgow Herald’ read   “Lapsley and Borland Shine at Westerlands”   with a sub-head of “New Field Events Records”.   The meeting in question was the Glasgow University Championships and the report read:

“The wretched weather conditions which prevailed at Westerlands on Saturdaywere all against good performances, yet, on the whole, the Glasgow University students can view the results with a great deal of hope for their chances of success in the inter-University contest at Aberdeen in June.   Not only do these disclose that in AN Lapsley they possess a worthy and versatile champion of distinct promise, but also that Ian Borland has lost none of the form that brought him his championship just last season, while among the novices, on the flat at least, there is much good material that needs but development to ensure the future.   It was in the field that Edinburgh earned their victory last season at St Andrews, and it is here that the Glasgow men have made a distinct advance.

During the meeting two new University records were made, both in the field events, and both by Lapsley.   On Wednesday evening he threw the Hammer 186′  4″,   three inches further than the previous Glasgow record, and 1′ 4″ further than the Inter-Universities record of RD Macpherson, while on Saturday, in the javelin, he had a cast of 180′ 5″, 5″ better than the previous best at a Glasgow meeting.   Lapsley also won the Discus with 103′ 6 1/2″, but when it is stated that he also tied for the High Jump with 5′ 4″ and secured third in the Broad Jump, it will be recognised that the old Hillhead boy is as good an all-round athlete as Gilmorehill has produced for a long time.   It is unusual to find a heavy weight expert, among amateurs at any rate, who can also take his place where agility is required.”

The report ran on but the main thing was the standard of the athletics and the standard thereof can be seen from the results below.

The Aberdeen University event was held on the same day at King’s College Grounds but the Herald stated that there were no outstanding performances.   There were 13 events for the men and 4 for the women plus two relay races.   Among the ‘no outstanding performances’ were a Mile that was won in a time 6 seconds faster than Glasgow ( DF Murrel) and a half-mile won in 2:03.9 (DF Murrel) and a Three Miles won by DF Murrel in 15:54.2.

A week later the Atalanta Club took on the Achilles Club in Birmingham.   The Scottish team was minus Borland, Macpherson and Maingay and was well beaten despite some good performances, mainly by RS Howland in the Shot Putt and Mereweather and Lapsley who were first and second in the High Jump.

The Edinburgh University Championships took place on 30th May at Craiglockhart.   The ‘Scotsman’ reported as follows: “In practically every case, the results at the Edinburgh University Sports meeting at Craiglockhart showed improvement on those of the athletes of Glasgow and Aberdeen Universities, who are to be met at Aberdeen on Saturday.   One record was broken and one equalled.   The weather was fine, though an easterly wind may have been troublesome for all but the 100 yards men.   It was not directly behind the short distance sprinters, and it is doubtful whether FP Reid, who equalled the record of 10 1/5th seconds, got much help from it.   He rose perfectly and was winning all the way.   He won the furlong and the 440 yards races later, and both in good times.   The record which was broken was in the Hammer Throw which was decided in the forenoon.   AH Ewen, a son of the Rev. JS Ewen, Liberton, had a fine effort of 128′  1/2″ which was a few inches better than the previous best.   He followed that up with victories in the Discus and Weight Putting contest, and his putt, just on 39 feet, was with the exception of RS Howland’s record last year, better than all the performances done at the meeting since the War.”

The report went on but the results were as follows:

The two photographs below are from the Press and Journal for Monday, 9th June, after Aberdeen University hosted the Inter-Universities Sports, held in ideal conditions for good performances but unfortunately before a disappointing crowd..    The ‘Scotsman’ had the headline ‘EASY WIN FOR EDINBURGH’, the ‘Glasgow Herald’ had ANOTHER TRIUMPH FOR EDINBURGH’, and the ‘P&J  EDINBURGH THE CHAMPION UNIVERSITY’.   In the points contest, Edinburgh had 49 1/2, Glasgow had 34 3/4, and Aberdeen had 20 3/4 points.    The ‘Scotsman’ remarked “There were one or two surprising results at the Inter-Universities contest …. but the Edinburgh University students, thanks largely to a superiority in the field events, were able to record another victory.   After adjustments, the final placings gave Edinburgh University a margin of nearly 15 points over their Glasgow rivals, with Aberdeen University making one of their best performances for years.   Instead of being well out of the running, they had over twenty points, including two first places.”

The event that sparked most controversy was the shortest on the programme, the 100 yards.   The P&J reported:   “An unprecedented state of affairs arose in the 100 yards sprint, in which JC Thom, for Aberdeen registered a sensational victory.   He bounded away at the start, whil IC Borland, Glasgow, and FP Reid, Edinburgh, who were expected to fight out the finish, appeared to hang back, and the race was half run before they made their effort, which was too late, and Thom won by a yard and a half.   Subsequently the Edinburgh and Glasgow runners registered a protest regarding the start, but the judges decided that it had been fair, and the result stood.”

Another shock result was the failure of Lapsley to get a place in the first three in the Hammer Throw, although he won the Javelin, was 2nd in the Discus and 3rd in the Broad Jump.

The season progressed and the SAAA Championships were held on 28th June at Hampden Park in Glasgow.   The students did well.   Winners there included Borland in the 440 yards in 51.8,  and Maingay in the 880 yards in 2:00.4 while Ewen was second in the discus (114′) and Lapsley third in the javelin (150′).   This was followed by the International against England and Ireland on 12th July at Hampden Park where Borland was second in the 440 yards.   The Universities season was at an end although many of the athletes competed for their clubs or for the Atalanta Club.