The Empire Exhibition, Scotland 1938 was an international exposition held at Bellahouston Park in Glasgow from May to December, 1938, culminating in a Sports Meeting incorporated into the Rangers Sports in August that year.

The Exhibition offered a chance to showcase and boost the economy of Scotland and celebrate Empire trade and developments, recovering from the depression of the 1930s. It also marked fifty years since Glasgow’s first great exhibition, theInternational Exhibition (1888) held at Kelvingrove Park. It was the second British Empire Exhibition, the first having been held at Wembley, London in 1924 and 1925.  The 1920’s were a time of serious depression, photographs of athletic clubs were totally different from photos taken after the second war (1939-45) in that those emigrating were going – almost in desperation – seeking a better life, hoping for a better life than was possible in post-war Britain.   James Reston of Clydesdale Harriers, a Scottish international runner and winner of many races and medals, left for America, settled in Dayton, Ohio, and his son, born in Clydebank, became one of America’s greatest ever journalists; known as Scotty Reston he interviewed and wrote about every American president from Eisenhower until he died, including Nixon, Kennedy, Johnson, Carter and the rest.   After the second war, many athletes left Britain, mainly for New Zealand, Canada and the United States but in a better frame of mind: the war had been won, the atmosphere was happier than in the 1920’s and they were emigrating in a can-do optimistic fashion.

So the Exhibition was a celebration of the end of the miseries of the 20’s and a return to the Scotland that the people knew, and there was also an element of showing the increasingly threatening Germany of the strength of Britain and the commonwealth.    It was declared open by King George VI and Queen Mary on 3 May 1938 at the Opening Ceremony in Ibrox Stadium, attended by 146,000 people.   In addition to the Royal Patrons and the Honorary Presidents representing governments and institutions here and in the Dominions, the Exhibition President was the Earl of Elgin who was also President of the Scottish Development Council, initiators of the exposition.   There were many attractions to educate people about what the Empire could do and how far the power of Britain still spread.  The following is from the Kirkintilloch Herald of 4th May, 1938. 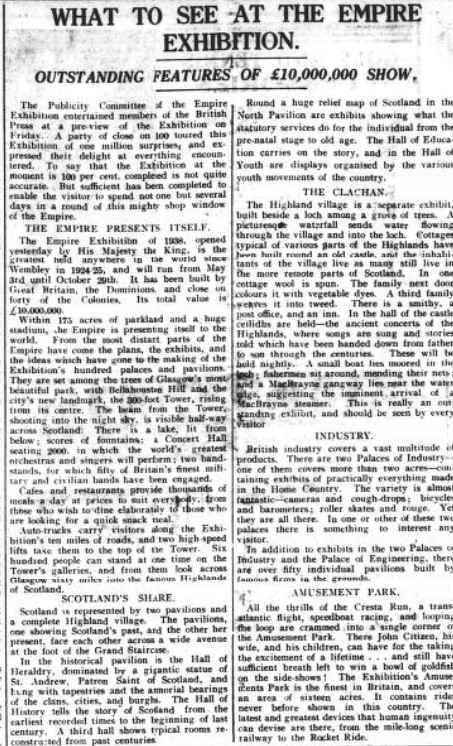 There were all sorts of special events and established events had a kind of celebratory twist to the proceedings.    For the sportsman, athletics and other events were held in August with exhibitions of various sports such as shinty.  The Sports at Ibrox Park  in August that year were quite special.   The international flavour associated with the Rangers Sports at the start of August was, if anything, enhanced for the occasion with a big team of Americans competing.  70,000 spectators went along to the meeting where the highlight was  Sydney Wooderson’s attempt on the world 1500m record.   He only failed by 1.2 seconds to break Lovelock’s record when, in a handicap race he just failed to overhaul the entire field , he was timed at 3:49.

There were however four Scottish all-comers records broken –

*the quarter mile was won by W Fritz of Canada in 48 seconds running from scratch in the handicap race with JW Loring of Canada second off 6 yards and CF Campbell of Springburn third;

*the half mile was won by FR Handley of Salford in 1:52.4 off 6 yards but the third placed AH Colyer of Watford,running from scratch, ran 1:52.8 which was a new all-comers record’

*the 120 yards hurdles was won by Don Finlay of the RAF in 14.7 from J Patterson and A Tolmich, both USA;

*and pole vault where DM Hastie of Hill HS with a handicap of three feet nine inches won the competition but C Warmerdan cleared 14′ 3″ to create new Scottish and British all-comers records. 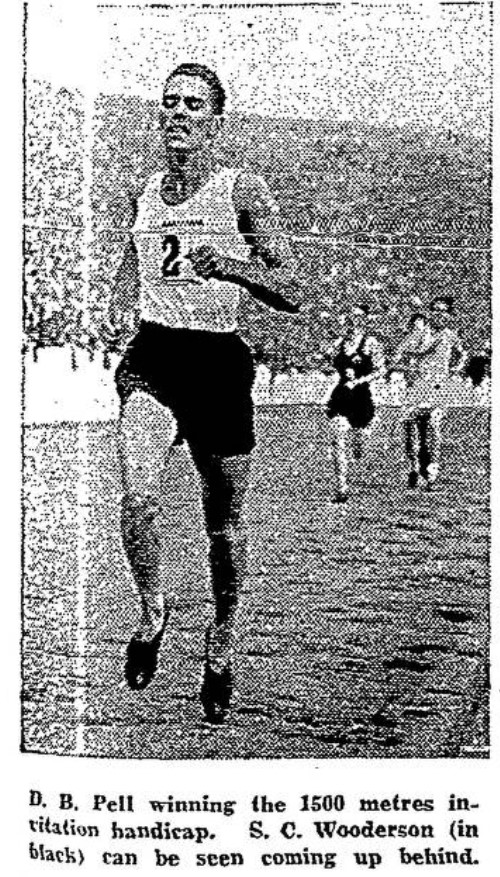 The open events too had many top class fields, two examples from many –

the first three in the 8 laps steeplechase were JC Ross of Shettleston, Gordon Porteous of Maryhill and Adam McLean of Greenock Glenpark.

There were also exhibitions by American athletes in the shot and discus where the distances would have been Scottish records too had they been done in bona fide competitions.   Then there was the Marathon. 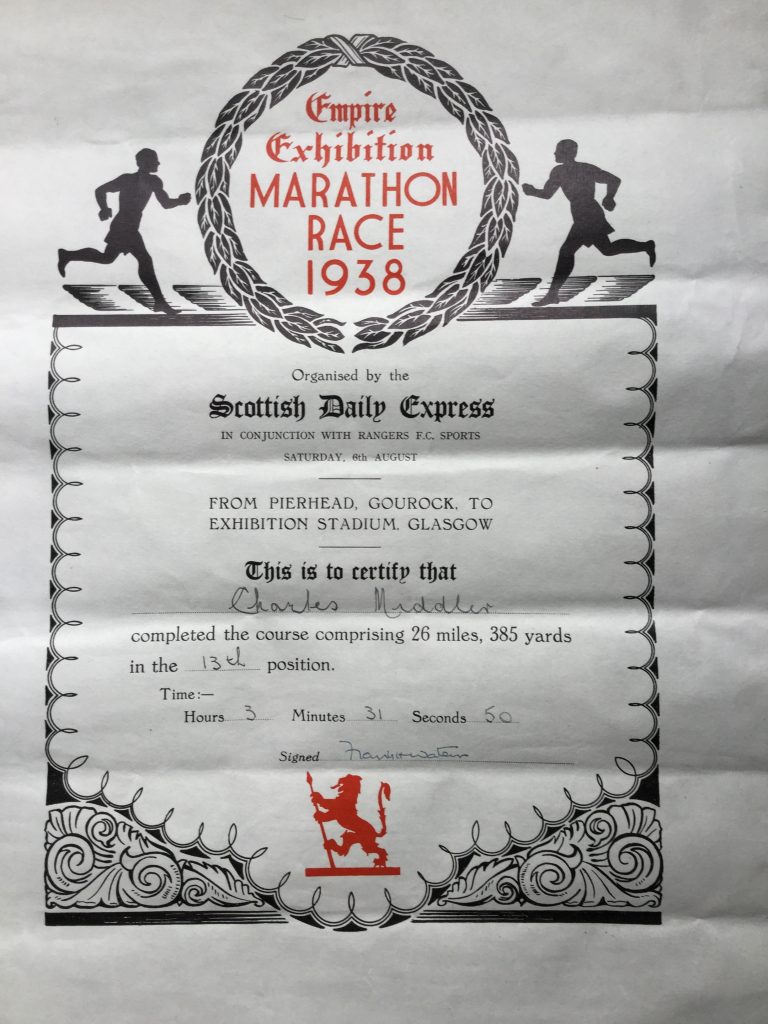 There was a genuine 26 miles 385 yards marathon race.   There had always been a ‘marathon’ race at the Rangers Sports but it had usually been over 17 miles.   On this occasion it was the full distance.   At this time, point to point races were in vogue with events like Drymen to Firhill being run: the organisation and mild chaos of the start being conducted away from the arena but the sports promoters would put up the prizes and have the finish of the race in their arena as part of the sports.   The race started at the Pierhead in Gourock and terminated in Ibrox.    Road races usually went off perfectly but this time there was a wee hitch.   There were so many runners entered for the mile that two well populated races were held – the first won by Andy Coogan of Maryhill (110 yards) in 4:12.8, the second by J Kerr, Hillington, (160 yards) in 4:14,6.   So far so good but the winner of the marathon – TF Lalande of South Africa, and a member of Herne Hill Harriers in London, – entered the arenawhile the mile was in full swing and the track crowded with bodies.   He had to make his way through as best he could after 26+ miles of running, to make it to the finish through what the Herald called ‘a maze of runners’.   Fortunately he was approximately a mile ahead of the next runner, T Strachan of Glasgow YMCA.    The race result:

There was only one Scot in the top six.   Lalande was born in Durban, Kwa Zulu-Natal, South Africa on 31st December 1904.   He ran in the 1936 Olympic Games in Berlin where he finished down the field in 27th place of the 42 finishers from 60 entries, in 2 hours 57 minutes 20 seconds – the Scottish temperature seemed to suit him better if the time is anything to go by.   His personal best was 2:36:18 which was run in 1936, but the Berlin Games can’t have been much fun for a black South African.   He moved to London and ran for Herne Hill Harriers where he finished second in the second ever Finchley 20. 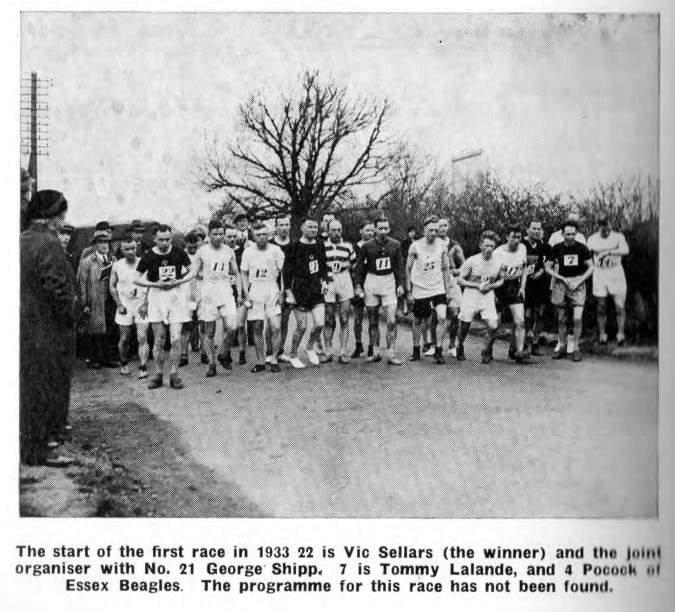