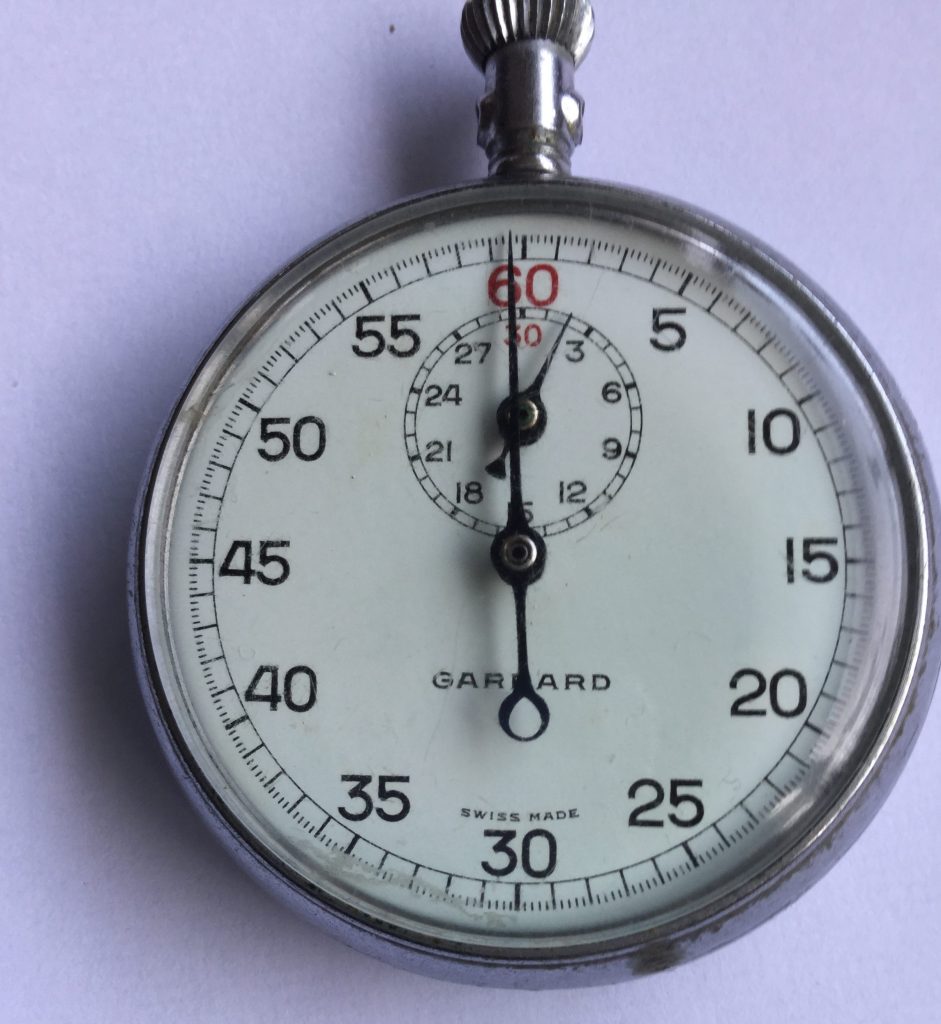 Robert S Langlands from Dumbarton was one of four Langlands brothers who were significant club members at a local level.    The Langlands family is well known in Dumbarton and it is significant enough for their history to be well documented in the local Library.   His father George had come from Dundee to be Postmaster in Dumbarton and had four sons of his first marriage.   Robert, born 1870, was the oldest followed by Sam, 1871, George, 1874, and William 1876.   They all did well in life with Sam being Chief Inspector of Lighting for Glasgow Corporation and George being a notable marine engineer and manager of Beardmore’s in Dalmuir then of Barclay Curle’s.    Robert himself was a surveyor for Lloyd’s of London and worked in London and Cadiz – this would probably account for the shortness of his athletics career – he was 25 when he set the record and just setting out as a professional man.   RS Langlands first appears as a club member in season 1892/93 when his brother Sam  was local Assistant Secretary and George was local vice captain.   He is not recorded as having won anything that year    He started off running cross country and in February 1894 he was a member of the team which won the Scottish Junior Cross Country Championship at Hamilton; he was also awarded a time badge during the summer season although it is not clear from the records what it was for.  In 1894/95 his youngest brother William had increased the family membership to four.

His claim to fame was that he was the first Scotsman to run under two minutes for the 880 yards.   As with all these barriers, there were many who were attempting to be first including his club mate Robert Mitchell, a St Mirren FC football player from Paisley who was the main rival.   Mitchell was a considerably good athlete He won five SAAA 880 titles between 1889 and 1894, only missing out in 1893.    He established a Scottish record of 2:00.4 at the St Mirren FC Sports in 1889 and the same year he set a Scottish record for 660 yards in 1889 of 1:15.4.   In 1894 he won the Scottish 440 yards in 51.8 seconds and the 880 yards in 2 minutes 9.6 seconds in the championship meeting at Powderhall, Edinburgh in June 1894.   On 22nd June 1895, the SAAA championships and the SAAU Championships were both held in Glasgow on the same day.   At Ibrox Park the SAAA event was won by MCC Seton in 2 minutes 5.4 seconds but at the SAAU Championships held at Hampden Park, Langlands won in the time of 1 minute 59.6 seconds – the first time that the two minute barrier had been broken by a Scotsman.     The race is reported in John Keddie’s Centenary History of the SAAA thus:

“It was another Clydesdale Harrier, Robert Langlands, who finally broke through the 2 minute ‘barrier’ in Scotland.   He achieved this at the breakaway SAAU Championships at Hampden Park on 22nd June 1895.   His winning time was 1 minute 59.6 seconds and apparently the pace was so shattering that no other competitor finished the race!   It is perhaps odd to think of a 2 minute barrier today, but one can picture the excitement created by such an occasion.   This was a real milestone.”

Milestone or no, the local ‘Lennox Herald’ headed their coverage

the article continues “The first championship meeting under the auspices of the new Scottish Amateur Athletic Union which was formed recently following a split in the Scottish Amateur Athletic Association, took place at Hampden Park on Saturday.   The most noteworthy performance of the meeting was the breaking of the Scottish Half Mile Record by R Langlands, Dumbarton.   Rodger of Maybole did not turn out and Langlands’ only opponent was the previous holder of the record, R Mitchell of Paisley.   The pace set had apparently been too much for the Paisley man who dropped off after covering nearly two thirds of the distance.   Langlands continued to run in splendid style and finished inside Mitchell’s record by four fifths of a second.   The performance was a capital one and as Langlands has youth on his side and probably something to learn through further experience we look to him eclipsing Saturday’s feat before long.   His brother George ran very pluckily in the Mile race at the same meeting and finished second to W Robertson of Clydesdale Harriers.”

Where Mitchell had been a 440/880 runner, Langlands was championship material at 880/Mile distances. It is interesting that the pace set by the stronger man was too hot for the 440/880 runner with the Scottish record for 600 yards.   Mitchell had joined the club before any of the Langlands family and in season 1888/89 he had won 13 first prizes, 2 seconds and 7 thirds.   He was a seasoned campaigner before Robert came on the scene.   Unfortunately his career ended in disgrace: In 1898 he was permanently suspended for betting as part of an investigation carried out by the SAAA.     The last word on Langlands in the club records is in season 1899/1900.   As indicated above his career as surveyor then took him to London and Cadiz in Spain.   Nevertheless he was the first inside two minutes and

“This was a real milestone.”

Langlands was coached by the Celtic trainer Danny Friel.   Friel had been born in Bonhill in about 1860 and was also one of the founders of the Celtic Harriers club.   His relationship with Langlands is remarked on in several places.   For example in the “Scottish Referee” of 24th June,1895, – when Langlands set the record – the report on the race read: 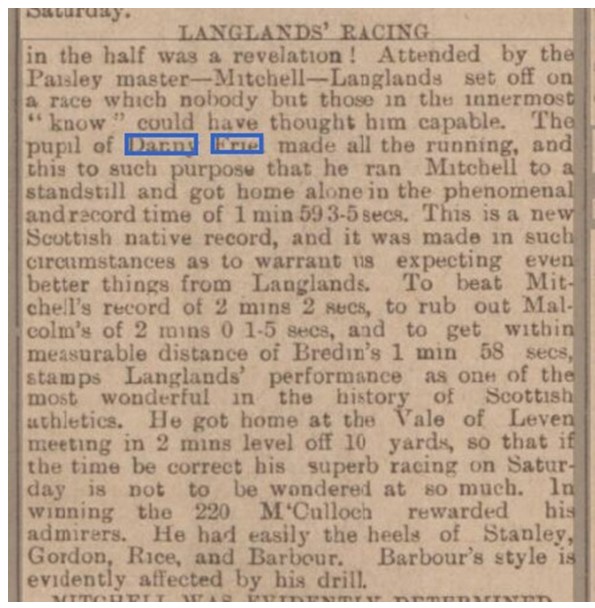 When Lanaglands was going for the SAAA 1000 yards record the following week, Friel again came into the picture – 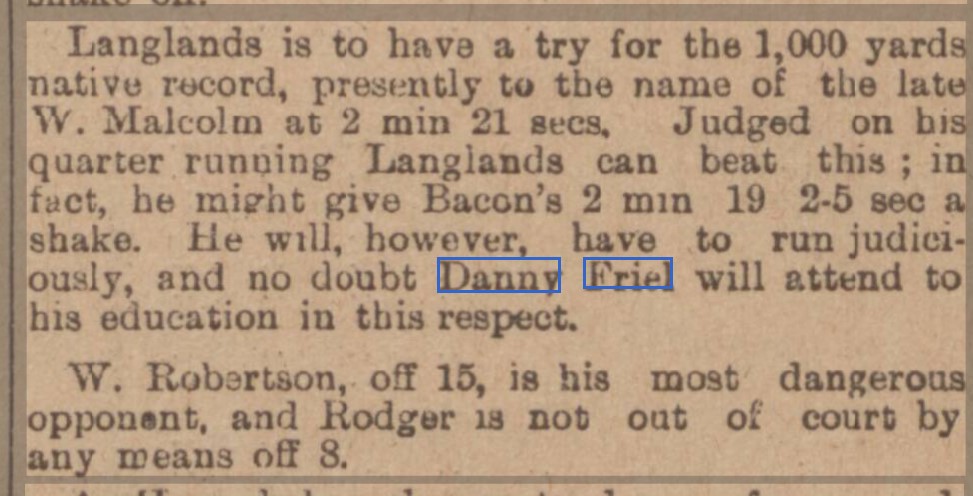