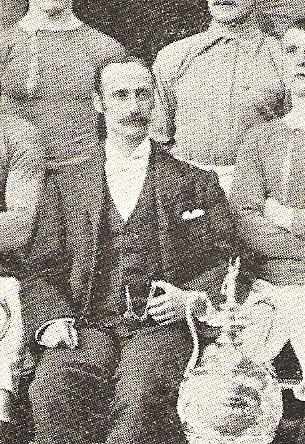 The Rangers Sports are well known.   Not only did they have the very best of international athletes competing, but they held open handicap events alongside the star studded international spectaculars.   The service this did in raising the standard and motivating domestic athletes was incalculable.   It is impossible to envisage a meeting organised by any body in Scotland which involved invitation events for international athletes alongside open events for Scottish athletes.   However the club did more than host the annual amateur meeting on the first Saturday in August.   Several formats were tried such as the professional highland gatherings held in the early 1900’s.

The following notice appeared in the Club Notices column of the ‘Scottish Referee’ and other newspapers in mid-June, 1903:

For the Mixed Style Championship of Great Britain, between ALEX MUNRO, Scottish Champion, and MATT STEADMAN, of England

Gymnastic Novelties by The Marzelos

It was a new venture for the Ibrox club and the previews were all favourable – it was expected to be huge success, the club directorate were showered with praise and, it was said, there was enough talent to be seen for three meetings, never mind one.   The Scottish Referee promised that if the sports were as brilliant as they promised to be, then it would be another red-letter day in the Rangers FC history.

Unfortunately, the weather did not do its bit to promote the meeting:  “the 27th was as dreary, disappointing and as disgusting as a November fog.   The worst of Saturday’s cruel experience was that it was somewhat unexpected, for the morning opened gloriously, the sky giving little or no indication of the rain which was stored up behind its azure shade.”  …  “the rain pitiless and pelting fell upon rich and poor.   The finest of fine millineries, the blaziest of blazy ‘bashers’, the daintiest of the dandy ‘dudes’, and the ‘prawest’ of the ‘praw’ Hielantmen who, in the garb of ‘Old Gaul’, paraded at Ibrox Park in the Rangers grand Highland fetes – all had their share of water.”

In brief it rained buckets.  The rain and its effects was mentioned in almost every paragraph of the reports – but the meeting went on and one of the most stirring events of the day was the wrestling match between Munro and Steadman.   “Regarded as magnificent specimens of our race, the two champions, apart from their ability, are a treat to look upon.”    As a battle between champions it was well received, and the victory of the Scot, Munro, was appreciated by all present.   He then further delighted the crowd by winning the caber tossing.   The piping and dancing?  A curtailment was requested by the press if they were to be included in future – there was just too much of each!

The Scottish Referee recommended to other sports promoters that they take a leaf out of the Rangers book if they wanted to spice up their sports with shinty and the Marzellos, a group of talented acrobats taking turns in performing delighted the crowd.   The heading on the athletic results read:  MISERABLE WEATHER  –  CAPITAL ATTENDANCE  –  MAGNIFICENT WRESTLING

The name of W Struth, Edinburgh, competing at Ibrox, immediately leaps out at us.   Not only did he win the half mile, but he was second in his Heat of the 300 yards.  Looking at some of the times, the question is – were the measurements accurate and/or was the timekeeper qualified?   It had been a successful weather despite it all and the club was encouraged enough to hold another the following next year.

The man from Edinburgh was again in action in the half mile on 18th June, 1904, but could only finish second this time in what was again described a a very full programme.   But were the Games a success?   They were covered in a favourable light – not only by the Glasgow and West of Scotland Press but also by The Scotsman in the East.   They started their report as follows:

“The second of the Highland Gatherings so auspiciously inaugurated by the Rangers Football Club last season, took place on Saturday at Ibrox Park.   Although the weather was somewhat cold and the sun obscured by threatening clouds, the attendance was very good.   The principal contest in the wrestling was between Alexander Munro of Govan and Alfred Kramer of Germany for a purse of £25.   The match was decided by the best of three falls in Cumbernauld, Scottish and Graeco-Roman styles.   In the first style Munro won two falls, and the German one fall; in the catch-as-catch-can, the foreigner lost the first two falls, the first in 3 minutes 10 seconds and 6 minutes 10 seconds respectively.   Kramer however gave a much better account of himself in the Graeco-Roman style.   From the start he forced matters and succeeded in pinning Munro’s shoulders to the mat in 4 minutes.   Munro won the two remaining falls in 4 minutes and 30 seconds and 8 minutes respectively. “

That   was not the only wrestling on offer – WW Bain, described as the middle weight champion of Britain, undertook to throw six opponents in an hour, at the same time as conceding a stone over his own weight.”    He was successful.

There were also dancing and piping contests – and of course, more wrestling (wrestling Scotch Style, under 12 stones)

It had been another successful meeting.

and that may have been it – there were athletic events held at Ibrox on every Saturday between the end of May and the middle of July in 1905 but none of them were hosted by the Rangers FC and they were all amateur meetings too.   A successful experiment, well favoured by the Glasgow public and it seems to have lasted for just two years.