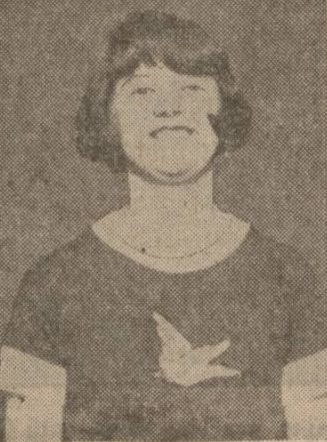 “Miss Nan Robson (15), who won the club championship of the ladies’ section of the Dundee Hawkhill Harriers in a 3-mile race, which she completed in 16 mins 40 secs.”

The Women’s A-Z of club runners on this website summarises Nan’s career as follows and after reading it, you may agree that it is worth elaborating just a bit.   Certainly the time above for a three miles race is still a creditable time.

“Nan Robson was a pioneer cross-country runner who competed for Dundee Hawkhill Harriers. The SWAAA first organised a Women’s cross-country Relay at Bothwell Castle (outside Glasgow) in 1930. DHH (including their fastest runner, Nan Robson) finished second to Shettleston Harriers. In 1931, that order remained the same.

However, in 1932, when a normal race was organised at Hamilton Racecourse, the National Cross-Country Champion was Nan Robson who “ran a magnificent race”, in front of the Scottish half-mile record holder Connie Johnston and Barbara Anderson, both from Maryhill H (which was first team, in front of Dundee). Yet Dundee Hawkhill won in 1934 and 1935.” 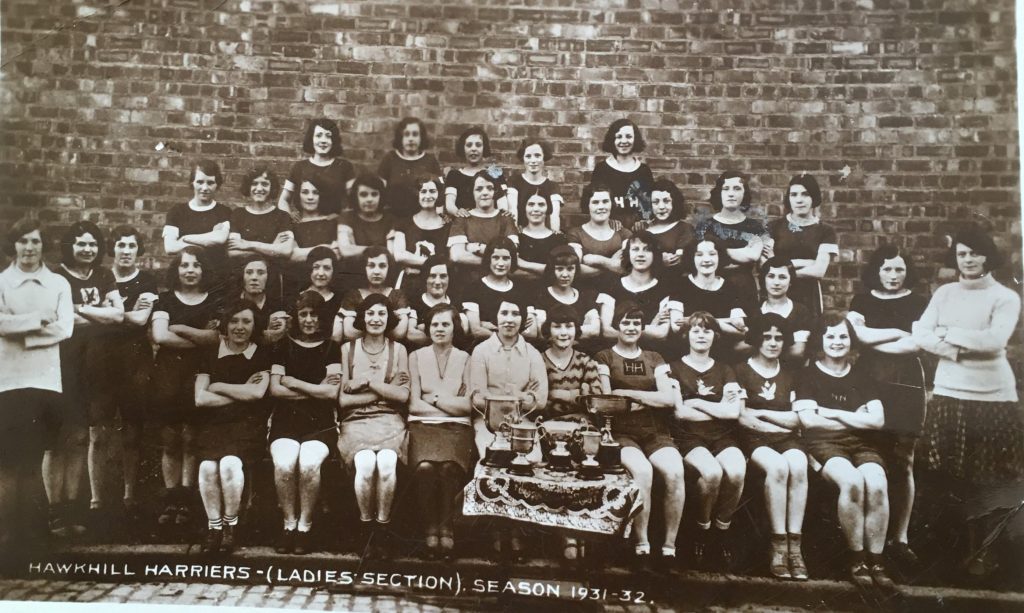 Dundee Hawkhill Harriers Ladies Section was one of the very first in Scotland and its members won no fewer than five Scottish women’s cross-country individual titles  in the 1930′.   It was a big group too – one report on a rival team mentioned that it’s Lady member had taken part in a competition.   That’s ‘Lady member’ as in singular as in one.   The Hawkhill group above indicates the strength of the club.   It was also a part of the club – unlike some women’s sections which were forbidden to wear the same strip as the men’s section and which were required to have their own treasurer, and structure within the club.  Note the following clipping from the Courier’  of 19th December, 1929: 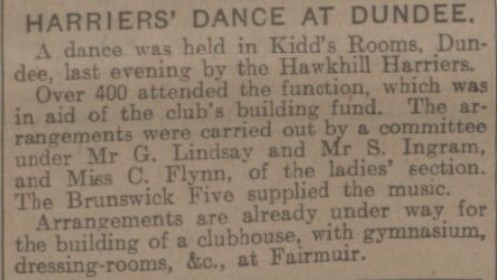 Nan’s importance is that she was the club’s top runner almost as soon as she joined the club and that she won the Scottish women’s national championship in 1932.   She is not mentioned in the Courier report of  30th December, 1929 which simply said: The ladies’ section of Dundee Hawkhill Harriers held a sealed handicap race on Saturday over two miles of road.   Good times were returned.   Miss M Mitchell, scr, taking 12 mins 11 secs and Miss P Laird (received 1 sec) 12 mins 16 secs.

She was certainly a member in January, 1930, as the photograph at the top of the page tells us she had won the club championship at the age of 15.   She was in action during the summer and competed in meetings on the track.   The Courier  reported on two of them:

On 14th June, 1930 she ran at the  Invergowrie Sports.   She was second in the 100 yards handicap in which she and the winner both ran from scratch and on 21st June at the Midmills Sports, before a crowd of 2,500 spectators, she was third in the 880 yds handicap, again running from the scratch mark.   There must have been other meetings before that for the handicapper to have given the teenager a scratch mark in both 100 and 880 yards races.

However it is as a cross-country runner that she made her mark and the report on 1st December, 1930 read as follows. 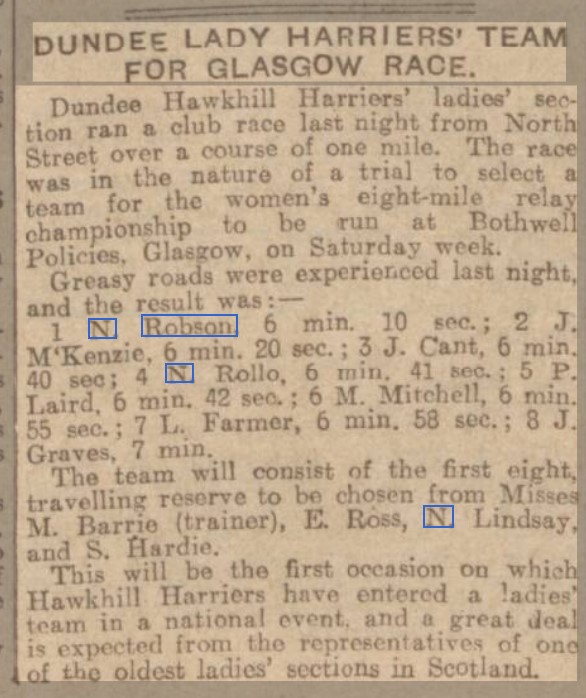 There were no women’s cross-country championships at national level at the time but the idea of a women’s relay was floated, it was accepted and the first race was on 13th December, 1930.   The relay involved teams of eight women, each running approximately one mile.   It was held at Bothwell Castle and necessarily involved a long travel for the team.   It was won by Shettleston Harriers with Hawkhill Ladies second.   The report tells us that Dundee were well behind in the first three laps of eight, but came through in the latter part of the race.   Team: M Mitchell 7:49, E Christie 7:46, J McKenzie 7:56I  Farmer 7:54, P Laird 7:42, T Graves 8:14, J Cant 7:24 and N Robson 7:05.  Total Time: 61:50.   Nan had equal second fastest time with C Hogg of Maryhill, only 2 seconds slower than fastest time by Nan Aitken of Shettleston.

That was the biggest race of 1930 cross-country and it was into the 1931 track season for Nan Robson along with the other members of her club.   On Wednesday, 27th May, 1931, the Courier had a preview of sports to be held at Dens Park courtesy of Dundee FC in connection with National Lifeboat Week.  Nan Robson had entered and was scratch runner in both 220 yards and one mile.   Unfortunately, in the event, held on 1st June, Robson was not mentiones but club mate Miss HS Christie won both 1 mile and 2 miles handicaps.   Shortly after that, on 20th June, at Midmill Sports before its usual big crowd – this time of 3000 spectators  – Nan ran from scratch in the 220 yards and finished second.

Between summer track and winter cross-country seasons, on 3 Sept, 1931, the Evening Telegraph had notice of the Hawkhill sponsored and organised Perth to Dundee 20 mile walk, finishing on the Esplanade in Dundee, with 28 ladies taking part, including N Robson.   Competitors were to travel by 1:00 pm train from Dundee, changing in the YMCA Perth and there were to be 5 training walks on Sundays from different parts of the city.   The walk was held and won by Ina Buist but there was no mention of Nan in the results – it’s not clear whether she was unplaced or just didn’t start.   The distance wouldn’t have upset her, as we will see she used to do 30 mile walks once a week.

1932 was to be Nan’s big year.   There was to be a Scottish Women’s Cross-country Championships to take place at Hamilton Park Race course 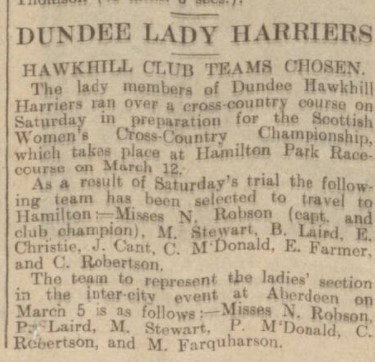 .The championship was to take place on 12th March, 1932, and there were nine teams entered.   The report from the ‘Glasgow Herald’ read –

“Instituted last year as a relay event, but this year decided on ordinary team lines, the annual championship decided by the Scottish Women’s Amateur Athletic Association was decided at Hamilton Park Racecourse.   As on the previous Saturday when the NCCU Championship was decided at the same venue, a Dundee runner gained the individual honour while the team championship went to Maryhill Harriers, a Dundee club again being runner-up.   Out of an entry of nine teams (eight to run, four to count) all were forward except Kilbarchan Harriers who had only three runners of their team present, these competing as individuals.   The course was laid on the race track and measured very little short of two miles.   Excellent conditions prevailed   Right from the start Nan Robson went to the front.   When the runners returned having traversed the loop at the bottom of the straight, the Hawkhill champion was seen to have opened a lead of several yards.   This advantage the Dundee girl steadily increased finally breaking the tape an easy winner.   Constance Johnson (Maryhill) the Scottish half mile champion and record holder, finished second almost 100 yards behind while BG Anderson (Shettleston) was fully that distance farther  to the rear” 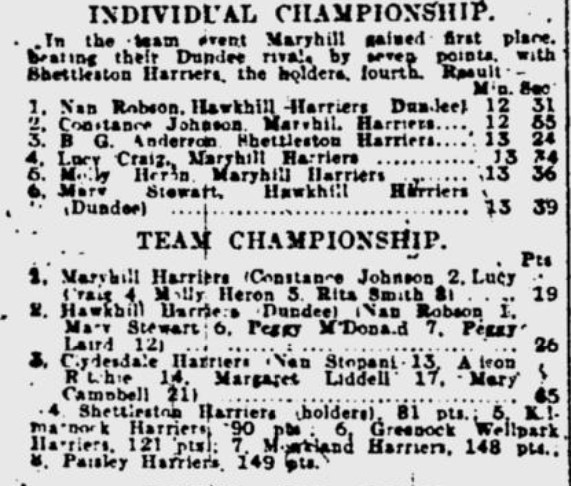 The ‘Courier’ also reported on the race but not in such depth – the women who ran were entitled to their celebration.   Look at the faces in the photograph below from ‘The Courier’ of 14th March 1932. 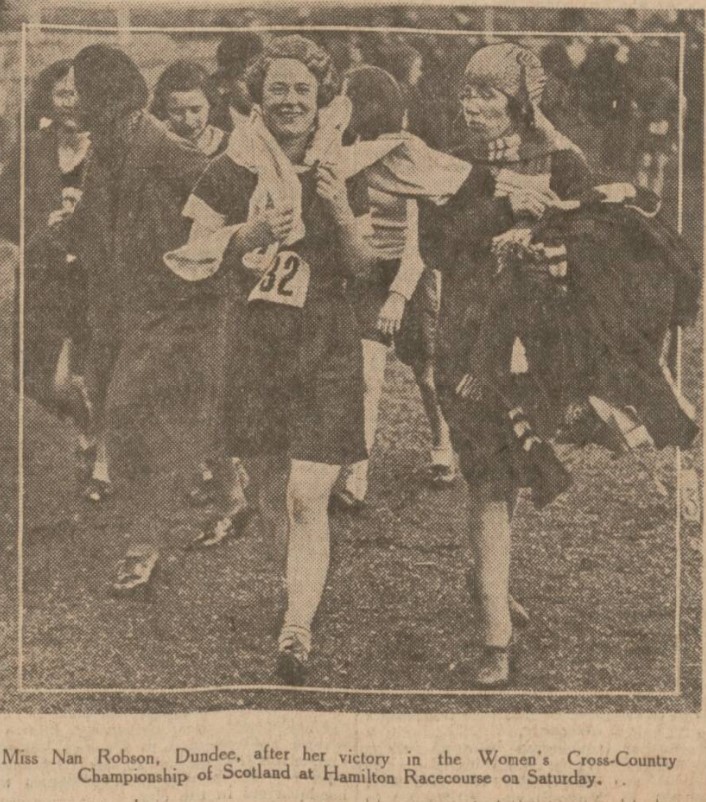 Local papers love local sports people winning national championships and  this is typified by the feature article from the ‘Courier‘ below.

On 3rd May, 1932 at Dens Park, there was a Dundee Ministers  vs  Midlands Amateur ‘Old Crocks’.  Two -races at half time – a men’s walking race and a women’s half mile with Nan Robson competing.   But on the day of the match, there was no report of the races at all.   However she must have been racing to have received and accepted the invitation.

At this point, Nan (not yet 20 years old) disappears from the local papers reports on athletics.   In 1933 there was no mention either.   The women’s national cross-country championship which she had won with such panache in 1932 was covered as follows on 27th March, 1933, in  the ‘Courier‘ 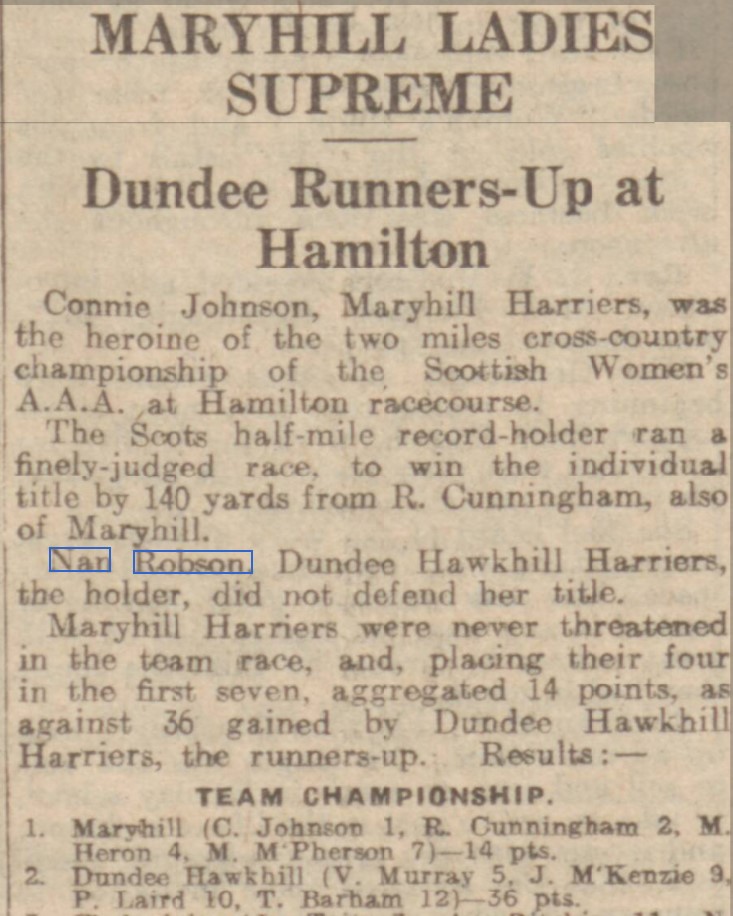 There were many races that summer in which the Hawkhill Ladies did well but there was no sign of .   eg

….   and that would seem to be the end of her career.   She came into the sport at the end of 1929 as a 15-year-old and was gone by mid-1932.   It was probably a sign of the times  that women had short careers that ended when they started to grow up and behave like ladies should.   Society had expectations of young women.   Whatever the reason, a superb young talent was gone from the sport.