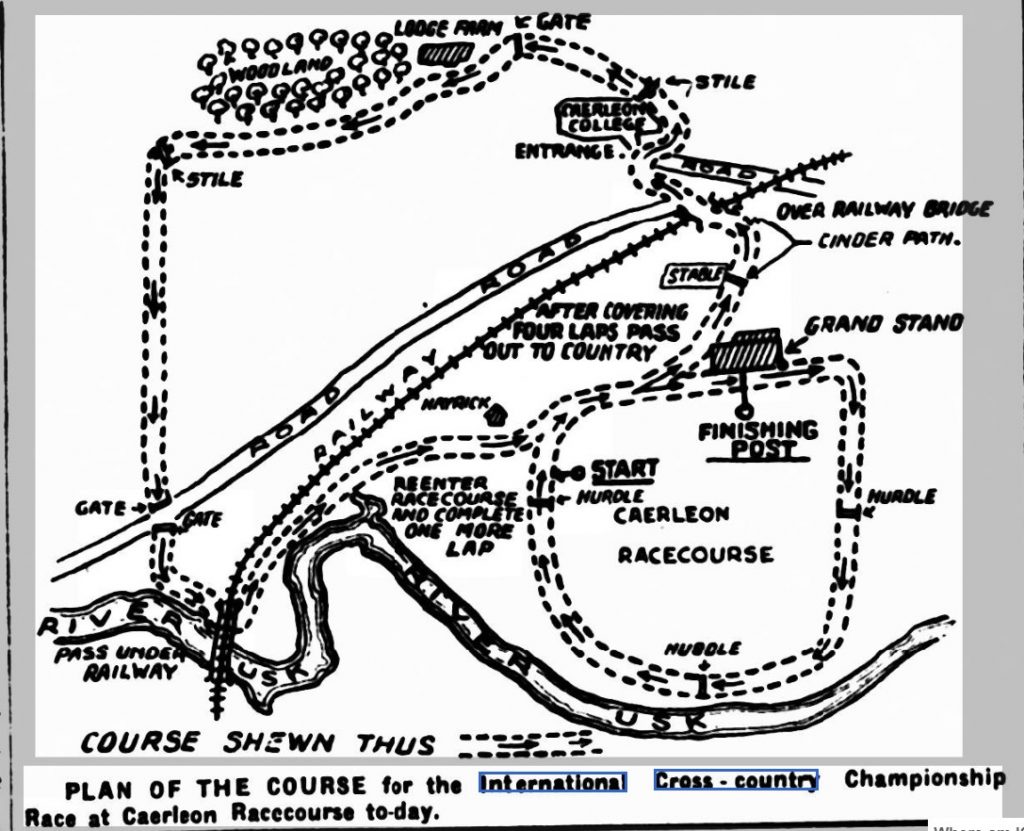 I once heard an Irish runner at the cross-country championships whether she ran for Northern Ireland or Southern Ireland.   “There’s only one Ireland!” was the rapid response.   This was not always the case and for a short time in the 1930’s there was only one in ‘the international’.   It was a good time for the Scottish team with 7 team medals (3 silver and 4 bronze) and 4 individual (1 gold, 2 silver and 1 bronze), but not so good for Ireland.   It could have been better though but we should perhaps look at the situation that prevailed.

1933 was the key year but a look back at the Irish team that competed in the event in 1932 would help.   There was an Irish team competing in 1972 which was made up of 7 runners from the NACA Championships and one from the NIACCA.   NACA was the National Athletics and Cycling Association which existed between 1922 and 2000 and was a federation of athletics and cycling clubs.  It affiliated to the IAAF on 11 January 1924, and sent teams to the Olympics of  1924,  .’28 and ’32.    It also sent 5 athletes to the 1930 Empire Games, in Canada.  In each case, the team was claimed to represent “Ireland” rather than the Irish Free State.   There was a separate body – the Northern Ireland Amateur Athletic, Cycling and Cross Country Association (NIAAA) – which was affiliated to the AAA’s and there was some animosity between the two Irish bodies.   In the 1932 International at Brussels, the NACA cross-country championships were held on 7th March and afterwards the team to compete in  Brussels was chosen.   It consisted of runners from (mainly) NACA and runners from NIAAA (including the first to finish for them – H McFall from North Belfast).   So far so good but ..

Early in 1933 problems started to arise.   There was a move to enter a separate Northern Ireland team in the championship while keeping the NACA selected team as an Irish Free State team.   Articles such as the following appeared 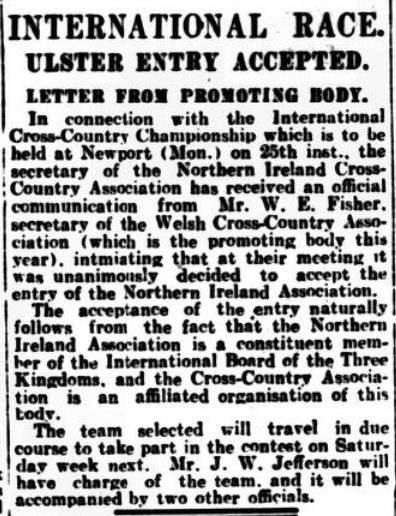 The Irish Press reported on the team to represent Ireland after the NACA Championships, and the hotel in which they would stay in Newport when they travelled to Wales for the International fixture.   The decision announced above to accept the NI entry was not without consequences – 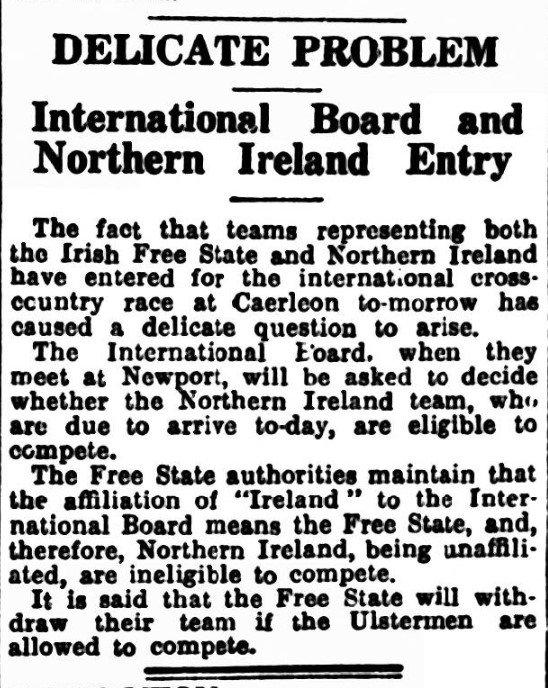 How would the cat jump?   What would the International Board decide?   The Press continued with the build up to the race and the Welsh Western Mail had a long report in which it said that The Scots had high hopes for James Flockhart but it was asking a lot from a first year internationalist, and Scotland had Robbie Sutherland.   They concluded with a not of the festivities attached – 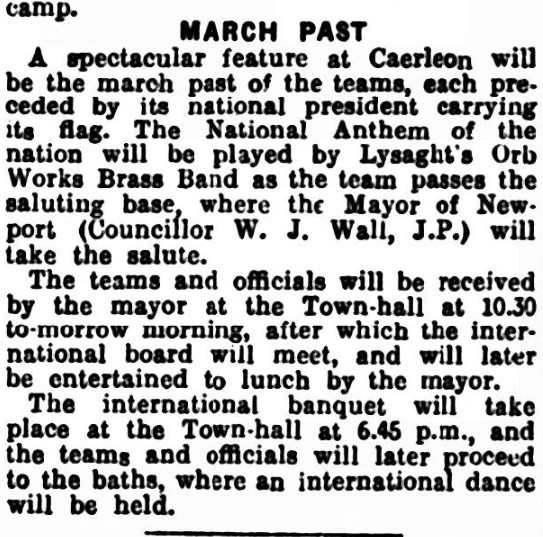 A day later and the map reproduced at the top of the page was printed – an interesting map for what it shows of the nature of cross-country at the time.   Road crossings, stiles to negotiate, a hurdle, gates – vastly different from today’s manicured courses which at times resemble extended bowling greens.   The arguments were still going on in the back rooms though.   This was now the day of the race – 25th March – both Irish teams were in Newport and had completed their preparations for the event.    That morning there was an article, written on the 24th, in the ‘Northern Whig’, a Belfast newspaper headed “WILL NORTHERN IRELAND COMPETE IN TODAY’S CHAMPIONSHIP?”   and it began

“France will vote for the Irish Free State”, said a French official to a reporter at Paddington yesterday when the French team together with the Southern members of the English team left for Newport.   “Our delegates have been instructed to press for the withdrawal of the Northern Ireland team on the ground that Ulster runners are included in the English side.”

“It is understood that the AAA (England) will have difficulty in obtaining the admission of the Northern Association to the Federation as membership can only be granted by a two thirds majority.   Only 12 delegates, representing 6 countries, will be entitled to vote on the matter, and if only one other association, besides the Free State, votes against it, England’s motion will fall.”

The teams from both Irish Associations were listed, both were ready to run but it was up to the men in suits to decide.   On the day of the race, the meeting took place. This report is from the Northern Whig.

When the Internayional Board met prior to the race the English delegate moved – ‘That the application of the Northern Ireland Association for membership of the Union be deferred for a year.’   The Free State representatives proposed a direct nagative, wn when the vote was taken the Free State, France and Belgium voted for the amendment, and England, Scotland and Wales against it.   The Chairman gave his casting votein favour of the latter and moved out of order a protest by a Free State representative that a two thirds majority was necessary to carry the original motion.

It was then proposed by England that Wales should invite Northern Ireland to compete in the race, and with France and Belgium abstainingfrom voting, the motion was carried by six votes to two.   It was then that the Free State intimated that their team would be withdrawn from the race.   It is understood that an appeal was made to them to allow their team to face the starter but they declined to depart from their decision to withdraw.   The official announcement issued after the meeting of the board:-

The International Cross-Country Board decided to defer for twelve months the question of the affiliation of the Northern Ireland Amateur Athletic Association.   It was further decided that they should be allowed to run today in the international race without prejudice to the future.”

The results were good for Scotland – Individuals first and then the team: 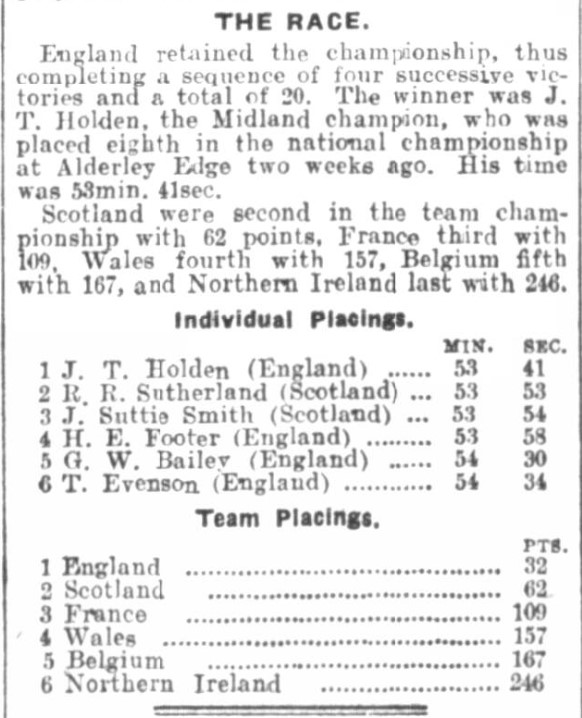 Where did the championships go from there?   There was only one team from Ireland from 1933 right up to 1938 when there were two teams.   That meant two trials – reports from the Belfast News-Letter: 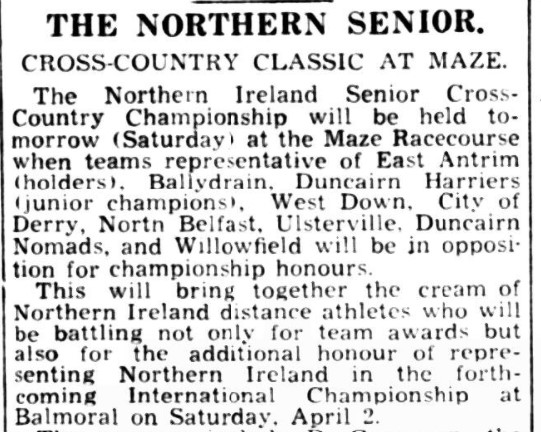 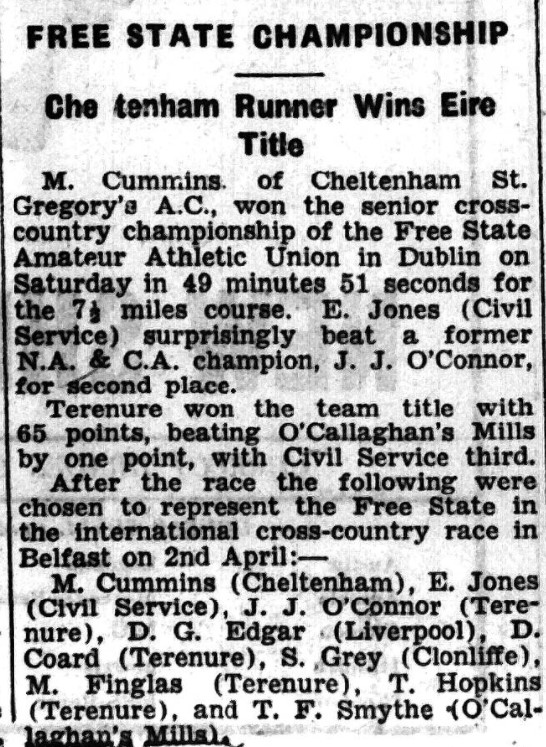 How did the teams fare on 2nd April?   They were last and second last BUT – had they run as a sibgle team with the six best men scoring, they would have beaten Scotland for fourth place.   Reports said that there were two Irish teams for the first and only time – but there were two teams in 1939 just before the War started.  They were again last and second last – but after the War there was indeed a single team from Ireland and in 1946 it was one place and 65 points ahead of Scotland.