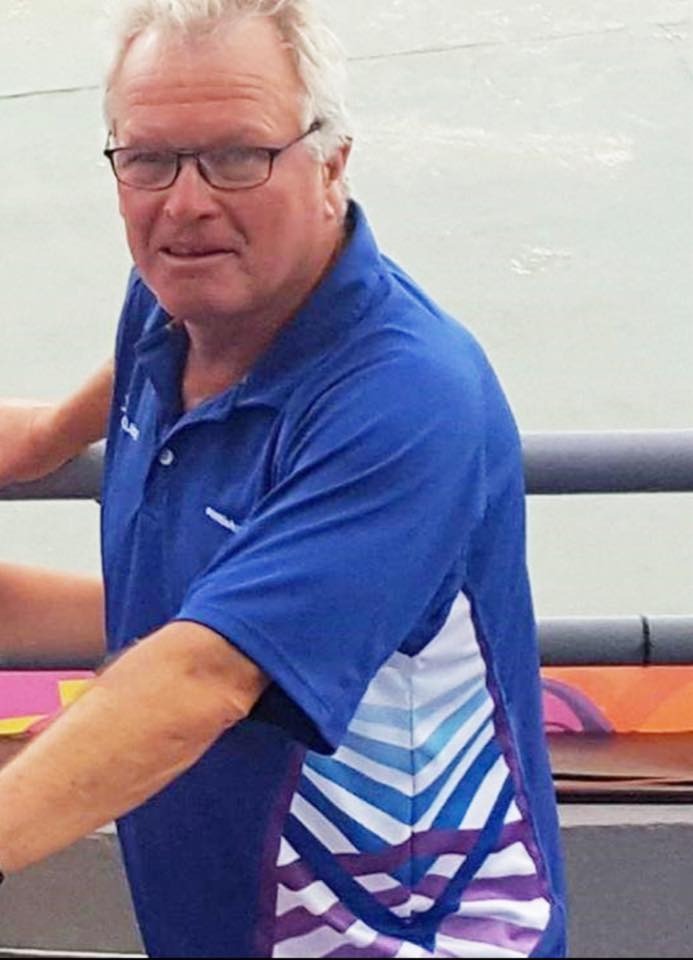 Scottish athletics has had many very good athletes who went on to become coaches and/or administrators.  David Lothian is one of the very best.   He has been  top class runner with very good times at distance from 100 metres to the marathon, he has run in medal winning teams with many of  Scotland’s best ever athletes such as Lachie Stewart, Lawrie Spence, Nat Muir, Jim Dingwall, and Willie Day. as a coach he has worked with athletes of all standards from club runners to senior international standard, as an administrator he has worked on national events on the track and over the country and has  worked as an official at individual events.   He is also a man who is a good club servant – he does what his club needs him to do, and then does a wee bit more.   As a role model for the sport, you would go a long way to find a better.   We asked him to complete the questionnaire to start the profile on his beginnings in the sport and career as an athlete and the replies are below. 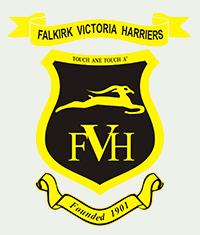 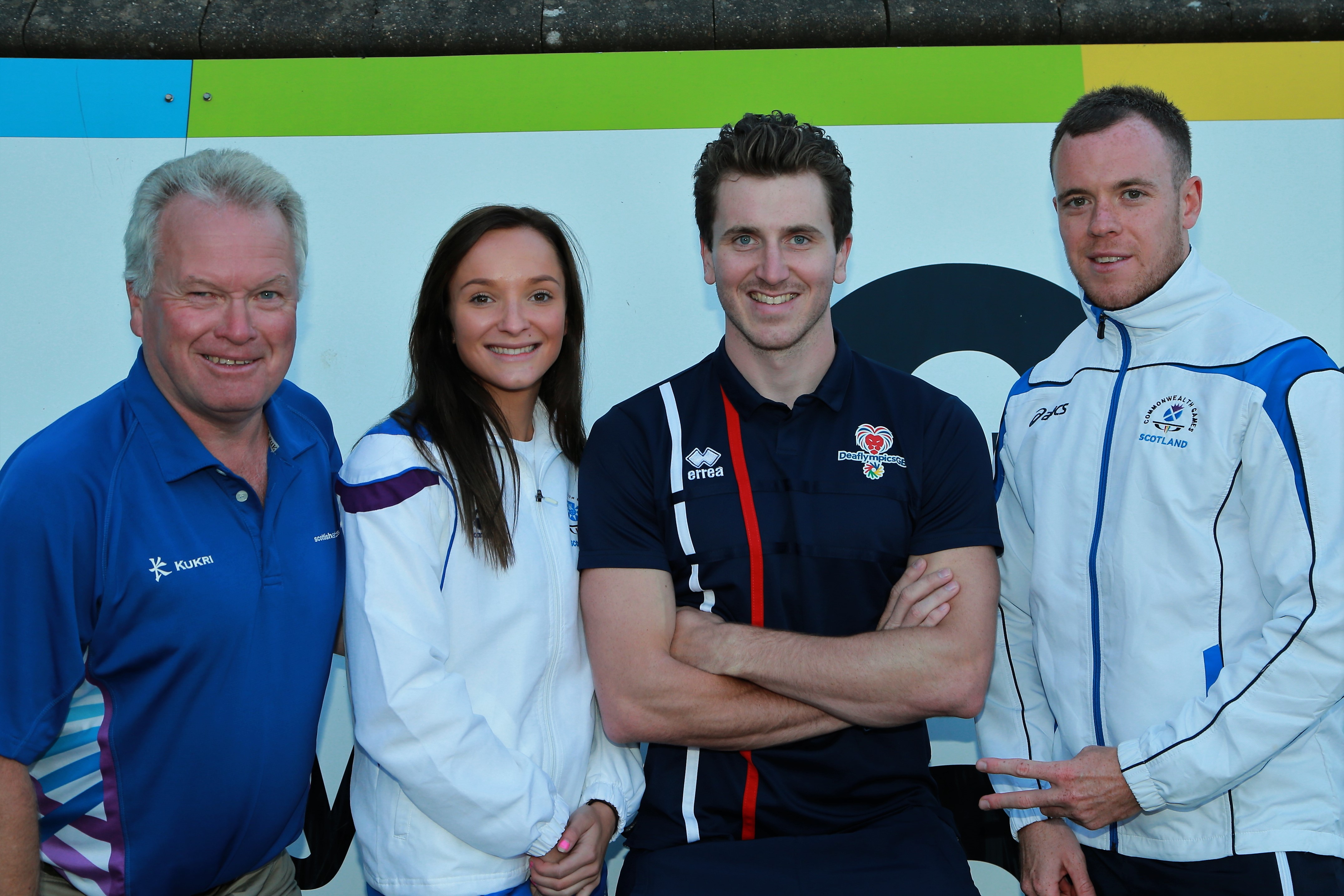 David on the left with Olivia Vareille, Mitchell Graham and Grant Plenderleith
A role that David obviously relishes is that of coach in the club and he describes his involvement in this aspect of athletics, and how it came about, as follows.
I left college in 1976 and decided very early on that I would get involved with Falkirk Victoria Harriers:  the initial intention was to focus on my own running despite the aforementioned problems with my heel, In October of that year I began my first teaching post at Camelon High School in Falkirk this position lasted for sixteen years firstly as a teacher then principal teacher.   As I settled into the job I started to find pupils who displayed some talent for the sport and eventually Willie Day and myself decided to set up training sessions in the school a couple of evenings per week.  This continued for many years. From the school training sessions certain pupils decided that they would like to take the sport further, thus they became involved with coaching that Willie and myself were doing for the club.   Initially it was a variety of events and over the years can probably say there was very little that I hadn’t tackled, even had a go with Pole Vault!  As you can see however my early coaching was very much grass roots and during that time at Camelon did have a pupil, Bobby Baird who was an under 20 International at shot,discus and high jump. Outside the school I coached David Clelland and partially coached Roddy Slater both very good under 20 International sprinters, however as with many others the younger age groups were as far as they went due to a variety of circumstances.    So around the club I had become very involved in coaching with what I would describe myself as falling into the ‘ jack of all trades’ situation.  Very much a case if the club had a lack of coaching in any discipline I would attempt to cater for that, and also did sessions to pass on basic knowledge to other coaches
For the greatest part of my coaching career I had attended coaching delivery sessions from time to time, but really just used my Physical Education teaching qualification and knowledge that I had picked up over the years from athletes and coaches working at a high level in a variety of events, . I had no formal coaching qualifications until forced to comply when the goalposts were changed and a teaching qualification ceased to be adequate in U.K. Athletics.
So having had to move on I now have up to the Events Coach qualification, endurance.  I suppose due to lack of qualifications I wasn’t invited to coach at Schools or National coaching sessions, until this year I did the SSAA coaching day 300/400m coaching group ( at 64 years of age) enjoyed it tremendously.
Reflecting back again it was during my ten years of serious basketball coaching that I still did the bulk of my fill-in for the clubs needs coaching rather than have a long term commitment to a group.  This period of time was during my second teaching post at Denny High School.    I spent 18 years there up until I retired   At Denny I had a number of athletes who made it into Scottish Schools teams along with others I coached from other local schools 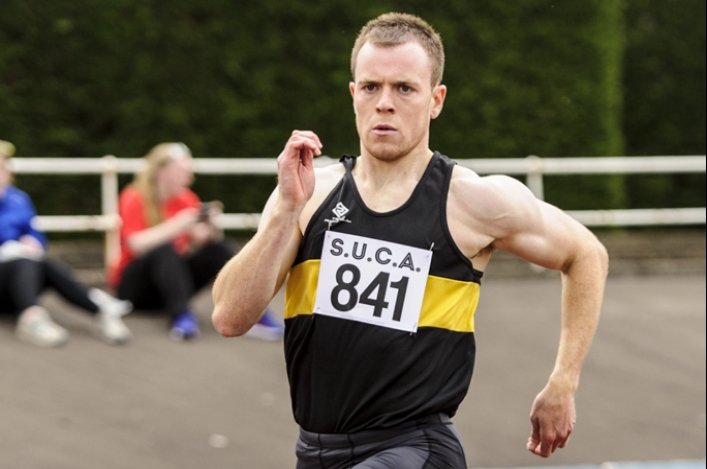 Grant Plenderleith
To bring you into my more recent years, that is from my retirement at 55 to the present day: this period of time has had the advantage of not being shared by so many other sports and interests and has allowed me to work with some very good athletes both on long sprints and short middle distance.  I suppose without doing any injustice to others a high point has been working for approximately six years with Grant Plenderleith who has had a Commonwealth Games (Glasgow) and a World Championships Indoor final (4 x 400m. ) as well as a variety of titles and medals at Scottish and British level to his name and is a pleasure to work with. The others are many:
*Gary Smith 800 metres senior age group
*Olivia Varille 400/800 metres U17 , Commonwealth Youth Games (Bahamas),
*Mitchell Graham Deaf Lympics (Turkey)I had the pleasure of going to watch them both back to back it was some trip.
I currently have working with me a number of 18 year olds who have competed for SSAA. Lewis Pentecost, Ben Grant, Fergus Rule, and a few more seasoned athletes who do a significant part of their training with me in Jade and Taylor Nimmo.   But just as important to me are many others who work hard and might just have their time to come
Then not to forget the Masters we have the ever present Andy Ronald and Craig Johnstone.    So I enjoy it all.”
A look at how the athletes mentioned above have progressed:, Grant’s athletics cv includes Commonwealth Games in 2014 in the 4 x 400m team which finished 5th in the final; At GB level he was 3rd in the indoor 200m in 2017:in the Scottish championships, he was 1st in the indoor 200m  in 2016, 1st  400m in 2015, 2nd 400m in 2017; 1st i200 in 2014, 1st i200 in 2015 and 3rd i60 in 2017.   Gary won the Scottish indoor 800m in 2008 and was third in the same event the following year,   With times of 49.49 for 400m, and 1:50 for 800 he is clearly an athlete with talent.   Olivia has pb’s of 26.2 (200m), 40.62 (300m), 56.45 for 400m, 2:09.5  (800m) and 4:45.47 for 1500m and ran for Team Scotland in the Bahamas in 2017.   That is a very wide range and at 19 she clearly has a future in the sport.   For more about Olivia, have a look at https://www.teamscotland.scot/athlete/olivia-vareille/ 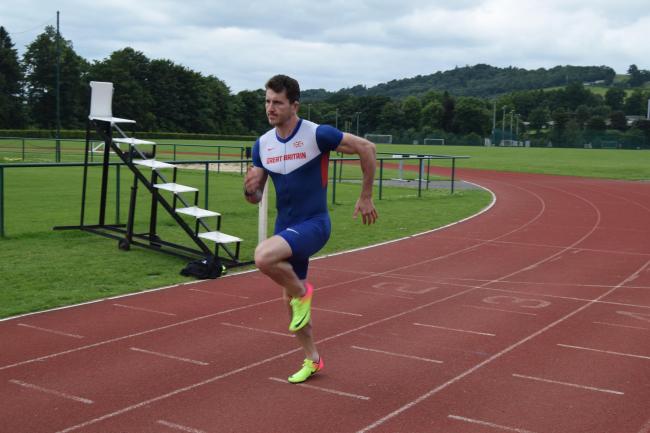 Mitchell Graham
The first person that I ever heard use the phrase “You do what your club needs .you to do” was Eddie Taylor of Shettleston.   Davie is the living embodiment of that dictum.   He actually uses almost the exact phrase when talking about his coaching where he started as a ‘jack-of-all-trades’ and has progressed to his present level of specialism.
“Out of all the involvement I have had, there has been a lot of pleasure, stress at times but I’m still there doing it so I must be enjoying it!
I’m not a qualified official having fought off the pressure constantly from the start team to get involved, there ain’t no spaces left in my athletics life I have to have some personal time for some beer”
and then he remembers yet another aspect of his athletcs and says: “I did have one other interesting addition to my athletics career so far.   I was a founding partner of Runsport alongside major partner Stuart Easton.   This happened in my mid twenties and had me at that time working seven days a week and still doing all the rest.So although most have been already mentioned my current status is
*Life President of Falkirk Victoria Harriers
*Honorary Life Vice President of SSAA
*2017. Honorary Life Member of Scottish Athletics.
*All of which I am very proud to be”
If you want a job done, ask a busy man: Davie is the living proof of that.   For what others think about David,  have a look  at this link 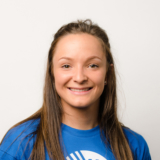