The best way to understand a club’s beginnings and development is usually to look through the minutes.   Not all club  minutes are extant or easily accessible, nor are the guardians always as helpful as they might be.   In this case, the interest for the wider community comes from the location and nature of the environment in which the club thrives.   Beith Harriers is a good going, consistent club in a rural setting where the challenges facing the club are a bit different in nature from those faced by most of the clubs in the country – and on this website.  There are many clubs like Beith Harriers and their place in the sport should be recognised and understood.      The guardian of the minutes is Kenny Phillips – a genuine enthusiast who knows a bit about athletics generally in Scotland, and a lot about his club.   He has kindly allowed us to see and publish the following.   Kenny has gathered the following and the rest of the page is his. 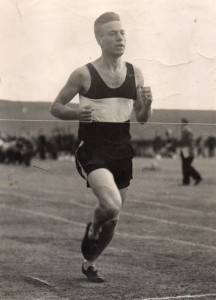 I have gone through the Beith Harriers minutes and noted the following:-

11/12/1923  Committee agreed to see Mrs Hood, who granted the use of her store as training Headquarters.

28/09/1926 Essential training items to be bought Sponges and bands, 3 of each for pace and whips plus whistle for whip.

22/08/1927 Committee  Saracens Hall for training at 5/- per week.  AF Neilson reported that he had negotiated a bath for the club, which had previously been utilised by Beith Football Club.

05/1929 A van secured for training entailing an expenditure of £10 and it was decided to paint it a red colour.

29/08/1930 New headquarters to be built and finished in 2 weeks, fully equipped with bathing accommodation and gymnasium at a total cost of £400.

09/01/1931 Agreed to install a hot water apparatus to give central heating.

12/06/1931 ½ Yearly Meeting  The summer levy for runners to be 2d per week and 3d per week for members who just desired a bath.  (most of the houses at that time were single ends and room and kitchens without a bath or inside water supply and the local residents made use of the club facilities of 2 baths and shower..).

23/07/1931 General Meeting  Proposed Ladies Section.  Annual Subscription 2/6d for members over 18 and 2/- for members under 18.  Levy 1d per week with training on Mondays, Wednesdays and Fridays and on Saturdays when the Club was away from home.

26/08/1932 Committee Meeting  Mr J Gibson appointed to see about coal for the baths and anthracite for the heating.

22/05/1945 Clubhouse derequisitioned and opened for training.  Levy 2d per week to cover cost of baths etc.

26/03/1952 Beith Harriers granted a free let of the clubhouse to the Old People’s Welfare Fund for a Beetle Drive to raise funds for meals for old folk and that no charge would be made for coal, lights etc..

31/08/1955 Wardrop Street Social Club wished to recompense Beith Harriers for the use of the clubhouse and offered their new premises with a purvey for the summer free of charge.

18/09/1957 H Maxwell said that he had purchased an immerser for the boiler and it will be installed soon.

21/04/1959 ½ Yearly Meeting.  A neighbour who held a key for the clubhouse was worried that she did not know many of the new members and that she might be giving the key to unauthorised persons.  The water heater had been left on, on several occasions wasting electricity.

31/08/1967 Ayrshire Cross Country Relay Championships to be held in Kilbirnie Public Park with changing at the Garnock Swimming Pool.   The Secretary was asked to approach the Parks Superintendent, George Murdoch, who was a former famous Beith Harrier, to measure the trail.

17/06/1986 The use of Garnock Pool in Kilbirnie for training on Thursdays was approved.

Beith Harriers had to spend a lot of time and energy building their clubhouse and maintaining it.  It had a felt roof that needed regular painting with bitumen and repair.  At one stage concrete roofing tiles of different colours were purchased cheaply and applied but they were too heavy for the wooden roof trusses and had to be removed and reverted to felt.  Very few clubs in Ayrshire had such a large gymnasium with equipment, two large baths, a shower, hot and cold water, central heating and various good cross country trails and it became popular for inter-club and championship races.

Reciprocal co-operation was achieved with neighbours, local organisations and other harrier clubs.   We got the let of the excellent Geilsland List D School for our Ne-erday races, when they were opened to females, and in return we offered to coach some of their residents.  We were thanked for our offer but reluctantly turned down because, “if the boys ran away, we would never catch them”

Stewarton Sports Association had a free let of the Strandhead Pavilion with showers on a Sunday morning but the members usually had a cross country run down one side of the River Annick and back up the other side, finishing with a dook in the burn, summer and winter, often having to break the ice.  They applied to Ayr County Council for the let of Stewarton High School to run an open cross country sports meeting on a Sunday for male and female athletes in all the age groups from Under 11 to Veterans but it was turned down by the letting committee whose membership included several ministers of religion.   With the assistance of the Ayrshire Harrier Clubs Association, a successful appeal was made to the full County Council.  Support was provided by the Community Education staff and over the years up to 800 competitors took part enjoying proper cross country courses, hot showers, and home-made baking.   When Stewarton Academy was built, the High School was converted to a Primary School with miniature toilets and the races transferred to Stewarton Academy and Robertland Primary School.  The races were successful for 30 years despite complaints from some of the head teachers.   We scrubbed out the schools after the races, to be ready for the schools starting on the Monday morning.  When we were blamed for damage, we had to inspect the school with the janitor before and after the let and list all defects.  We suggested that the Council should provide plastic sheeting to protect the games hall floor but we had to provide it at our expense.  In our final let the Academy was cleaned 3 times, once by us, once by contractors employed by the Council at our expense and once by the regular Council cleaners. 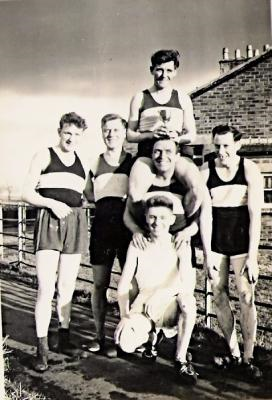 Some of our most prestigous events are sadly lacking in bathing facilities.

I remember running in my first National Cross Country Race at Hamilton Racecourse, where there was probably about 500 competitors, and there was only one sink with cold water under an outside serving counter.

At a recent National Cross Country Championships at Calendar Park, Falkirk, during very wet weather, many muddy harriers took advantage of a flooded field to get washed before setting out for home.

The oldest Life Member of Beith Harriers, George Lightbody, remembers some of the deplorable toilet facilities at track and field meetings in the summer Highland Games etc, where the proper toilets were reserved for guests and invitation athletes.  I shall send more details later.

There is a wealth of good solid first hand historical information there that is worth study.   The obvious question about how did a club start and where were the changing rooms, is answered.   Not an easy first step to take – there was one Glasgow club whose runners turned up and met at a particular lamp post at a street corner.   That was their HQ!

There is also a reference in June, 1926, to the purchase of red and yellow bands.   These were used for the regular pack runs with most clubs running three packs: fast, medium and slow.   Each pack was led by a nominated pace who was recognised by his red sash.  In addition each pack had a whip (or whipper-in) at the rear, wearing a yellow sash and carrying a whistle: if the pace set was too quick, the whip would communicate with the pace using the whistle to ease back to keep the pack together.   Similarly if the pace was too slow.   There were minor variations in detail – eg the Clydesdale Harriers whip wore a green sash although the red for the pace was the same.

The continuing saga at every club was with accommodation.   Most clubs wanted their own club hut or clubhouse and for those that managed the dream of owning their own, the work that had to be put in – and was willingly put in – was  usually considerable.   This was not confined to Beith, clubs up and down the land spent lots of time raising money, repairing plumbing, doing woodwork and decorating the premises.   This is all made clear in the extracts from minutes and Kenny’s comments  above.