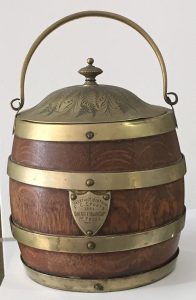 Before Clydesdale Harriers and Edinburgh Harriers were founded in 1885, the only amateur clubs were approximately a dozen Former Pupils and University clubs.   But the arrival on the scene of the open athletics clubs was not the start of amateur athletics in the country.   Not by a long way.   Little is known of the sport pre-1885 and it might be instructive to look at athletics in Scotland before that.   We can start with a look at athletics in 1883, before the clubs were gleams in the eye of anyone in either Glasgow or Edinburgh.   Given that meetings were held on most weekdays as well as Saturdays, we can look at coverage in the ‘Glasgow Herald’ of Tuesday and Saturday events for that summer beginning with the month of April. 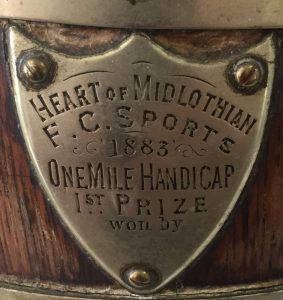 On April 7th there were three athletics meetings reported including the Inter-Scholastic Games, under the auspices of the ‘Edinburgh University Athletic Club’, took place at Corstorphine in the presence of ‘ a large and impressive assemblage.’   In addition to the Edinburgh schools, there was representation from Blair Lodge, Polmont, Trinity College, Glenalmond, Morrison’s Academy, Crieff and the Dollar Institution.  It was reported that ‘as in former years, a large proportion of the prizes went to Loretto .   There were 25 events contested including pole vault, hurdles and a bicycle race.   There was a mile handicap race at Manchester in which many Scots were involved including W Cummings of Paisley (scratch) and it was won by the limit man (off 150 yards), J Morgan of Manchester.    Cummings was absent for the simple reason that he was racing in a meeting at the Shawfield Grounds and making an attempt on the Mile record.   Approximately 5000 were present to see ‘the great match against Time’ by Cummings who held every British title from one to ten miles.   He was attempting to break Lang’s and Richards’s record of 4 min 17 2/5th sec and bets of £20 to £40 were taken against him.   Four timekeepers were appointed – one for each quarter and one for the final time.    At half distance, odds of 3 to 1 were laid that he would break the record.   His third quarter was a bit slower than required, and despite being loudly cheered in the finishing straight, he had paced himself too much in the first half (I quote) and returned a time of 4 min 21 sec.   There was also a 130 yards handicap with five heats and a final – the odds against each runner were quoted for readers.

“The promenade and amateur athletic sports held annually under the auspices of the West of Scotland Amateur Cricket Club came off on Saturday afternoon on Hamilton Crescent Cricket Ground, Partick.   The weather, the all important matter in out-of-door proceedings, was dull but not unfavourable, and the turnout of spectators was numerous.   The car was, as usual, a very attractive one and embraced a great variety of athletic work.   The events included throwing cricket ball, broad, pole and high jumps, one mile and two mile bicycle races, hundred yards, quarter, half and mile races, wheelbarrow race, hundred and twenty yards hurdle, tug of war over water, and a steeplechase with four water jumps.

The sports were on the whole quite up to the standard of former years.   Nearly all the crack amateurs were present, and some excellent athletic work was accomplished.   The various races were timed, as usual, by a cronograph kindly supplied by Messrs George Edward & sone, Buchanan Street. “

The other meeting that aftrernoon was the Royal High School Sports in Edinburgh, held on the  School Ground at Holyrood.

On April 21st, there were no meetings reported under the ‘Athletics heading’ but there was a single entry under the ‘Pedestrianism’ heading.   This was a meetimng at the Shawfield Ground that had only one race.   This was a 600 yards handicap with four prizes – £12, £2, 15 shillings and five shillings.   These were to be competed for by some well known English peds as well as the local ‘cracks’.   There were to be nine heats but a wee problem developed.

“Everything promised to pass off pleasantly until the final heat came up for decision.   It was then apparent that something was amiss, and several of the bookmakers asserted that Hodgson of Hatton was running under an assumed name.   This was positively denied and the race went on, but just when the competitors were nearing the goal the cry came that “the Englishman wins”.   The crowd then swarmed onto the track, the tape was broken and the race declared void.   The large prizes given by the proprietor have hitherto induced pedestrians from all parts of the country to enter the lists, and the running has been proportionately improved.   It would therefor be cause for regret if these contests should cease owing to unfairness on the part of spectators towards strangers.

As far as the final heat was concerned, Hodgson was running and we read:

“Pye of Morpeth had brought Hodgson from England for the purpose of lifting the handicap and when heats were run off it was clear that the latter had the race at his mercy.   When betting on the Final was opened, the Englishman was made a hot favourite at  2 – 1 on.   But even this price was only taken for a short time and the bookmakers stopped further business.   Latterly however a few bets at 3 – 1 were taken, when a rumour was circulated that Hodgson was not the pedestrian’s name.   Mr Hanratty cautioned him that if he was not properly entered and passed the post first, he would be disqualified.   Hodgson replied that he had just returned from America and that he was running under his own name.   In these circumstances the men went to their marks and were sent on their journey with a capital start, Wilson leading the field for half the distance.   At this stage it looked as if the Englishman had a poor chance of winning.   On entering the straigh for home however, Hodgson gained considerably on his opponents and 60 yards from the post was almost certain of victory.   But the crowd then broke in and considerably interfered with him; and the referee, Mr D Speirs, considering the state of matters, at once broke the tape and declared it no race.   The proprietors took the same view and ordered the final heat to be run over on Saturday first.”

The following week, the last in April, at the same venue, there were preliminary heats of a 300 yards handicap and a three-quarter mile invitation sweepstake for which the prizes were £25, £3, £1:10:00 and £1.   These were then augmented by 10/- for each acceptee.   Cummings was entered for this race.   The final heat of the 600 yards carried over from the previous Saturday, A Baird of Glasgow won with Hodgson not in the first three.   Despite the big money, Cummings was again an absentee but there were eleven runners in the handicap.  The report contained many details of betting odds throughout the afternoon and of the prize monery for the various events.

The preliminary heats of a 220 yards race were run off at the Royal Gymnasium in Edinburgh.