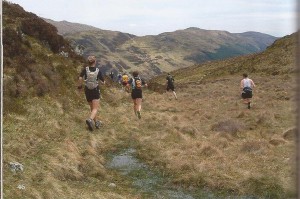 Many years before moving to Lochearnhead in 1996, I came up to walk on the hills – a friend and I walked from Brig o’Turk up over Ben Ledi, to Strathyre, over Ben Sheann to Balquihidder and then over to Loch Katrine before returning to the start.  My wife and I and various friends walked the Glen Ogle Trail quite often too.   It’s an area we like very much.   So when the Stuc a Chroin race started in 1988, we would come up, if there was no track league match that required our presence, to spectate.   We would walk up to the point where the trail drops down into Glen Ample, sit with our picnics and watch the runners come over the top and , leaving rucksacks and backpacks of all sorts, head down into the glen.   An excellent viewpoint.   Or we would walk into Glen Ample from the carpark south of Strathyre and have our picnic watching the runners come down one side and head up the other.   Or we’d just wander up and down the track encouraging the runners.   It’s a wonderful course, albeit one that I would never have  attempted to run.   I have walked to the top starting from the car park at Bracklynn Falls in Callander,  via Braeleny Farm

The race itself is described on the website (www/stucachroin5000,org.uk ) as follows:

The race starts and finishes at the outskirts of the village of Strathyre beside the A84 at the South entrance to the village. (grid ref. 561167) The route follows a track uphill behind the start area & joins the forest road after about 500 yards in a South direction. After about 2 miles the edge of the forest is reached (grid ref 577145). Turn left in a N.E. direction – rough ground – no path – follow edge of forest to (grid ref 583160) cross Meal Mor (550m) to point (grid ref 585160) overlooking Glen Ample. Down the hill to cross the hill-walkers’ path through Glen Ample (350m) grid ref 591160).

The climb up a steep heather slope to the top of Beinn Each (grid ref 603158) is a bit more testing until you reach the summit at 811 metres. From Beinn Each the route follows a hill walkers path along an undulating ridge to Bealach nan Caber (grid ref 603165) (Cross-over Point) then follows the same path for a scramble to Stuc a’ Chroin (972m)(grid ref 617175) via Bealach Glas (grid ref 606171).

The Return: An ascent to Bealach nan Cabar (Cross-over Point), down long grass slopes to cross Glen Ample path (grid ref 591158) then follow the forest track to the welcoming crowds to return to Strathyre.

It is often included in the British Fell Running Championship and is classed as a long race.   It is very hard beginning as it does with the short, steep climb up from the start at Strathyre to the forestry road which takes you up almost to the drop into the glen.   The wee bit over tussocky grass before you can see over the edge is also pretty steep before the different challenge altogether of the drop down.    As a walker I used to hate the rocky scramble up to the to and hated the coming back down even more.

A well supported race, there are usually a lot of English athletes taking part because of the nature of the event – and possibly as a recce for the following years.   The campsite south of the village is usually jam packed as are the local B&B’s and hotels – this year (2014) will be more difficult because two of the hotels, the Munro and the Ben Sheann, are closed which means two restaurants and bars fewer as well.   Two sets of toilets fewer too!   It is also well supported by the locals who turn out to welcome the athletes home at the end.

It’s a great day, a wonderful event and deservedly popular with all connected with it.   This is maybe more remarkable because it is one of very few hill races throughout the British Isles which is not organised by a running club or combination of clubs.   Organised entirely by local volunteers it is a model for all other races.