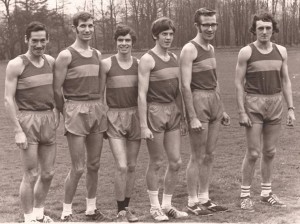 Henry Summerhill,  a tall, easy-to-recognise runner with his spectacles and head to one side  running action, was an interesting athlete.    He never served on District or National committees, never held major office within his club but nevertheless was an outstanding clubman.   Henry Summerhill and Shettleston were synonymous.   It is common to assume that good clubmen are automatically also multi-task people.   This is not automatically the story – eg Doc MacPhail was never a top class runner, but he WAS a top class club man.    Henry was a runner, pure and simple but a superb and loyal  member of Shettleston.    He has earned his place in this section.

He spanned at least two generations of Shettleston Harriers and ran with the best of both generations of stars, earning his place with  them both.  He turned up at the club’s Christmas Handicap in 1955 as Eddie  Summerhill’s wee brother and went on to out-do Eddie as a runner.   He was  spoken of above as ‘spanning the generations’; for proof we only have to look at  his record in the Edinburgh to Glasgow where he ran 15 time including a streak  of fourteen right off the reel.

Over the country, he was the same reliable, hard working, club runner but it was  1962 before he broke into the top team and finished twelfth and second counter  (behind Joe McGhee) in the winning team.   In 1963 he was first counter when he  was tenth in a team that was fifth; in 1965, he was first counter when he  finished seventeenth in the fourth placed team; in in 1966 he again led the team  home (twenty sixth) into fourth; in 1967 the order was Summerhill 19th, Wedlock  21st … with the team again fourth; 1968, Henry was twenty seventh, third  counter and the team was fifth; 1969, he was twenty third, third counter in the  second placed squad; 1970, he was twenty first, fourth counter in the third  placed team; 1971 he was sixteenth in the winning team;   1972, twenty fourth  and the team won again; 1973, fifty seventh and last counter in the silver medal  team;    1974, nineteenth in the fourth placed team;   1975, twenty fifth in the  third team and in 1976, Henry was fortieth and the team third.   Thirteen races,  three golds, two silvers, three bronzes.   Not a bad haul.   And then there was  the quota of District and County awards.   And the four London to Brighton  relays.   And being in the winning team in the first Allan Scally relay, and in  the winning team in the third Scally Relay.   Oh yes, and he was club champion  five times!   Henry Summerhill was a very valuable member of several Shettleston  teams.

When I asked around about Henry the word among those who really knew him was the same – a hard running, hard training, good guy.    First  John Wilson, who trained with Henry for a long time before he moved to England said that  Henry worked in a printers office, he thought it was somewhere off St Vincent street (or thereabouts) where he only got something like a 40 minute lunch break so he had a tight schedule if he was to fit a run in.    John worked in Dial House (next to the Kingston Bridge) and would jog down to meet Henry at his work place so that there was no waiting.    Henry would be on pace from the start.   The route was often up Argyle Street, turn at Kelvin Hall and loop back via Sauchiehall Street and finishing with a series of short sprints up several steep hills in the Heron House area.    Henry was relentless and if the streets were busy he’d zig- zag his way through people, cars but not slow up. Once a car nearly ran into them and, so the story goes,  Henry, placid as he was, almost punched the windscreen in to tell the driver off.   This could have been kind of hazardous given that you never knew who the driver was but Henry was undeterred as he was in the right!John reckons that this gave him an insight into Henry’s commitment to quality training no matter what.   Limited time, traffic and pedestrian congestion, obnoxious drivers or the Glasgow weather as he always finished with the short hill reps even when there was ice or snow – no doubt he would also be running that evening whereas often for John the 3 miles with Henry was like a race and all he could reasonably do that day!

Then there is this comment from Tony McCall who trained with Shettleston Harriers for several years and was an admirer of Bill Scally as well as of Henry.   I reprint it as Tony gave  it to me:

I trained at Shettleston for a couple of years. Henry had been injured and started back a few months after i ahd been there, training with Bill and a few others.

Henry did not mess about; having been injured or no, he was into fast long sessions almost immediately. He  ran a pace I struggled to keep up with but being a gentleman he would wait for me (and others) if a significant gap had developed. From the hut at Barrachanie we covered Lenzie, Steppes, Chryston, Cambuslang, Dechmont, and bits of East Kilbride all at a good pace . Some of it on the road and some of it over the country. Most of time, these runs were at the weekend. Steady but fast; I certainly benefitted from them. The distance would vary  between 13 to 20 miles depending where we went.

During the week normally Tuesday and Thursday the runs would be between 8 an 10 miles and the last few miles were very pacy particularly if Bill was along. I was always blown away no matter how hard I tried, I couldn’t live with them nor could anyone else.

Henry talked a fair bit on the run; mainly about running! one of his favourite expressions was – ‘Youv’e got to gut yourself in training to get the best out of yourself – always remember that’. He gutted me a few times.

Sometimes we would do a paarlauf arounf Barrachnie on a Tuesday. It was a mile circuit and there was two teams of half a dozen or so. Bill and Henry headed the teams. If my memory serves me it was 5 or 6 miles pretty well flat out. I was always in Bill’s team. Bill always paced it to keep the team together for as long as possible. Henry being Henry ‘gutted’ it from the start and his team were all over the place within a couple of laps. Some even gave up. ‘He’s murdering me’ was quite common. He never finished with a full team. Some of the boys called him Henry the Horse – but not to his face!

He always believed, like Bill, in a high mileage training regime. Hard sessions were always the order of the day. He took his cue from Andy Brown. He admired Andy a lot. ‘The first guy in Scotland who was running 100 miles a week’.

I remember once at the University race Bill and Henry were warming up around the track together. If they ran a mile they ran 4; the sweat was running off them like a wee stream. The laps got faster the longer they went. I watched this and thought to myself -‘your knocking lumps out of each other on a sort of personal I’m no giving in to you basis’. I thought ‘ Your leaving your effort behind on the warm up track’. But I was wrong I had a decent run that day but they ran a good race and finished pretty high up the field. Theri fitness levels had coped with what I thought was an excessive warm up. Henry was right about his ‘gutting theory’!

I remember the Western District Relays took place at East Kilbride one year in the early 80s. The Shettleston team was Henry, Nat, Laurie Spence and Bill and Shettleston won it with two vets in their team and won it well. Bill ran the last leg I always remember watching it and was really impressed. I was training with these two guys and they had just beaten some of the best runners in the west area and they were vets!

i can’t tell you much more about Henry. He was a very likeable guy, he admired effort from others no matter the level they achieved and gave out encouragement when he thought it was warranted. his attitude like Bill’s was nothing will be achieved without hard work and he certainly knew all about that. He didn’t have time for people with a half hearted approach to training or racing and he probably upset one or two along the way. But he was club man and always wanted the members to do their best for the club.

He never went near the track when I trained with him, neither did Bill. Road and country only. He eventually suffered from internal bruising  in his calves probably caused by his printer’s job as he stood at his machines all day. He never really got back after that; I’m sure he suffered from cramps quite a bit and then he had his heart problems as well. He reckons caused by running the E to G with a virus. ‘ I gutted myself but was 2 minutes slower than I expected’-. Because it was the E to G he ran because he didn’t want to let the team down – that was typical of Henry.”

The picture is of a man who would run anywhere, anytime, no matter how he felt at the time, for his club.    The expression “he would run through a brick wall for his club”  certainly applied to the outstanding Henry Summerhill.