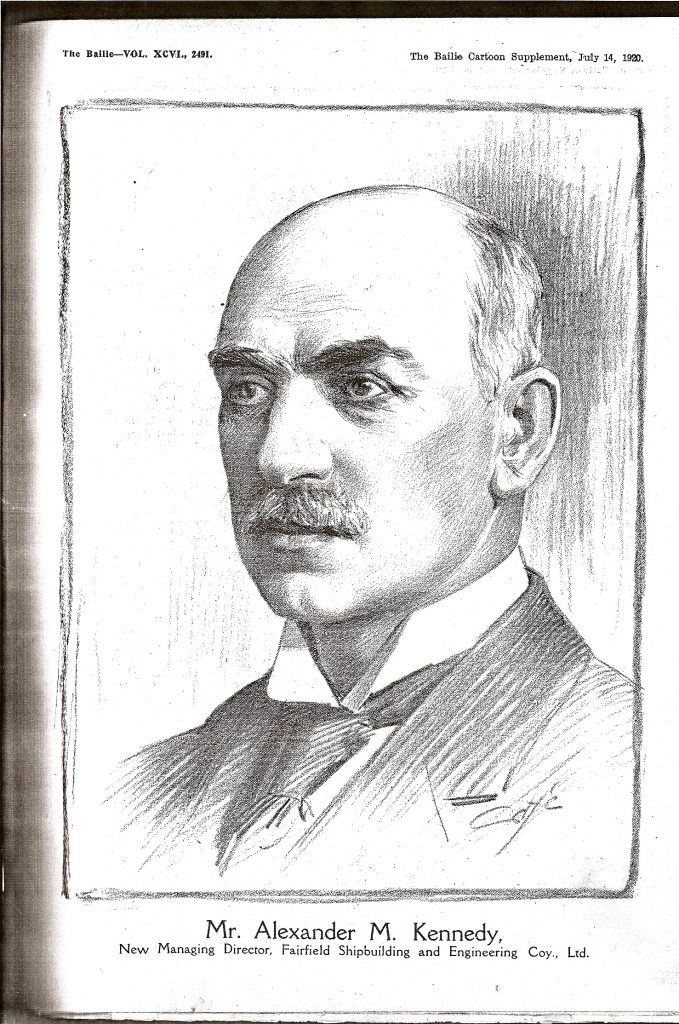 I was told stories about Sir A McA Kennedy by one of the older members when I was writing the club history in the 1980’s: founder member from Dumbarton, President, great speaker, chairman, organiser, patron, etc, etc.   When he first appears in the club records he is referred to as Mr A McA Kennedy, the knighthood not being conferred upon him until 1921.   Born in Dumbarton in 1860 he was one of seven children of a master house joiner who rose to become president of the Ship Builders Federation and Chairman of Fairfield Shipbuilding and Engineering Firm Ltd, Glasgow.

He is first mentioned in the club handbook of 1887/88 (ie for season ‘86/’87) as an ordinary member who had won no prizes anywhere for anything.   His organising talent must have been obvious for in season 1889/90 at the age of 29 he was president.   He must have been effective for by 1890/91 he was not only club president but also a member of the club football committee and a representative to the Scottish Cross Country Union.    After two years as president he reverted to being an ordinary member of the Dumbartonshire Section in 1891/92, 1892/93, 1893/94, 1894/95, 1895/96, 1896/97, 1897/98, 1898/99 and 1899/1900.   He is also listed as a patron of the County Section from 1898 before being elected as one of the Club Patrons (as distinct from the Dumbartonshire Section Patron) at the AGM in September 1926 and he held the position for several years thereafter.  Sir Alexander’s active participation in club affairs diminished as his business became more and more demanding (see below just how demanding!) but the link with the club was maintained.   The club Minute for 21/1/21 said “Congratulations to AM Kennedy:   A letter of congratulations was sent to AM Kennedy a former President of the club, on the occasion of his being knighted and Mr Lamond read Sir AM Kennedy’s reply.”

Ex-President of the Shipbuilding Employers Federation;

Chairman of the Fairfield Shipbuilding and Engineering Company, Ltd, Govan;

Member of Committee of Lloyd’s Register of Shipping, etc.

The “etc” is not mine – the WWW is responsible.

Starting from small beginnings he became a captain of industry.   His first job was as an apprentice in Archibald MacMillan & Sons Ltd which was a Dumbarton shipbuilding firm.    I quote from his obituary in ‘The Lennox Herald’ which contained much more detail:

“He made rapid progress in his practical work as well as in his naval architecture studies and at the age of 19 obtained at the South Kensington Institute of Science a first class degree in naval architecture.   Three years later he secured a First Class Diploma with Honours in naval architecture and took fifth position among candidates from all over the United Kingdom.   Through successive and lightning promotions he became the General Manager of the Fairfield Company at the early age of 31 and five years later was appointed Director.   In 1904 at a time when it seemed probable that he would become Provost of Dumbarton, Sir Alexander crossed to the south side of the river to become a managing director of William Hamilton & Co, Ltd, Port Glasgow where he further enhanced his reputation as a shipbuilder of unusual ability………. At the end of the War he decided to retire from Messrs Hamilton’s but for some time thereafter he occupied positions of great responsibility in the industry.   The year 1919 marked the beginning of the most remarkable period of his outstanding career.   It was then that he accepted the post of managing director of the Northumberland Shipbuilding Co, Ltd, Howdon on Tyne, a concern which under his control rapidly became one of the most successful in British shipbuilding.   While retaining his position on the Tyne, he became managing director of the Fairfield Company on the Clyde and of William Duxford & Sons, Ltd, on the Wear.   In 1920 he rose to the highest office of the industry – President of the Shipbuilding Employers Federation – and in that capacity revealed wise and sound leadership in an exceedingly difficult period………He was a member of the Institution of Naval Architects and of the Institution of Engineers and Shipbuilders in Scotland.  For two years he was president of the Clyde Shipbuilders Association.   His services were utilised by Lloyd’s Register Technical Committee and the British Engineering Standards Association”   And so on and on.   The list of his achievements is both lengthy and impressive but there is one other paragraph that should maybe be noted: In his earlier days Sir Alexander was keenly interested in athletics and sport.   He was at one time president of the Scottish Football Association, President of the Clydesdale Harriers, member of the Executive Committee of the Scottish Amateur Athletic Association and hon secretary of the Dumbarton Arts Club.”   He was also a very active member of the local community in Dumbarton serving on the education committee in particular.    “The best public work of the deceased was done in the sphere of education.   His chairmanship of the School Board here is still remembered.   There was a council of three who practically directed the educational affairs of the town and that with no little success for a Burgh Board.   The new Academy was their scheme; and their administrative success was the system of technical or evening continuation instruction which was set up in Dumbarton linking the school with local industry.   His Majesty’s Inspector often commented on this side of the work in Dumbarton especially when it was merged into courses of study and correlated with the Technical College in Glasgow.”

This was at the time when the Clyde really did lead the world in ship building with Denny of Dumbarton and John Brown’s of Clydebank among the leading pioneering yards.

Clearly a man of energy, intelligence and vision and one that Clydesdale Harriers was lucky to have as a member and it is possible to see why he was president in 1890 at the age of 30.

The Top Table at the Diamond Jubilee Dinner in 1935: John Kirkland, Sir A Kennedy and A Ross Scott in the Middle.

Fifteen years later he was Chairman at the club’s coming of age Dinner in March 1906 in the Large Saloon of the Grosvenor Hotel in Glasgow.   The menu of Whitstable Natives, Consommé a la Royale or Crème de la Reine, Fillet of Whiting aux Fines Herbes or Turbot au Gratin and Sweetbreads a la Clydesdale was served as well as to members past and present, to all club Presidents from 1890, President and Vice President of the SAAA, Secretary and Treasurer of the Cross Country Union, President of the Cyclists Union, Baillies and civic dignitaries from Glasgow and stars from the 21 years of the club’s history.

The link between club and industrialist was maintained and in an article entitled ‘First Harrier Club in Scotland – Clydesdale’s Claim to Fame’ in the ‘Evening Times of 29th October 1929 the writer under the pseudonym of ‘Pistol’ said: “It was in January 1885 that the Clydesdale Harriers club was instituted.   It took its name from the Clydesdale Rowing Club.   Four years ago Clydesdale celebrated its 40th Anniversary in the Bank Restaurant, Queen Street, Glasgow and on that momentous occasion Patron Sir A McA Kennedy a notable personality in the shipbuilding world occupied the Chair.   He referred to the efforts of Mr Charles Pennycook to bring together all the available founders of the movement.”

We jump forward four years when it was clear that his relationship with Charles Pennycook must have been strong and continuing.   In the club minute for 2nd April 1928 had the following entry: “It was reported that a former president, Sir A.M. Kennedy was seriously ill.   It was agreed to send a letter of sympathy.”     The minute for 28th April had the following: “Sir A.M. Kennedy: The President had received  a letter from  Mr C. Pennycook thanking the club for the interest taken in Sir A.M. Kennedy’s health; the said gentleman being in the very best of health.”    The relationship was a continuing affair.

The relationship with club was clearly encouraged on both sides over the years.   Having men such as Sir Alexander on the books in any capacity, the club was keeping in contact with significant figures in the Community who might or might not be useful at some point.  It also added to their belief in the importance of their Club.    His personal relationship with Chas. Pennycook seems to have been a continuing relationship and there is no reason to suppose that his friendship with characters such as Andrew Hannah and Willie Maley would have been any different.   From the club’s point of view the association with the great and the good was always to be welcomed.   When he died in 1939 it was recorded in the club Minute of 6th February 1939 as follows: “Death of a Patron: We regret to minute the death of Sir A.M. Kennedy who had been Patron and Past President of the club.   A telegram of sympathy had been sent to Lady Kennedy.”

It seems to me that he was more than just a Patron.