Sam Stevenson is the only Clydesdale Harrier ever to have run in an Olympic Games.   Andrew Hannah and A Ross Scott were timekeepers at the 1908 London Olympics, but he was the only man to have run in the Games.

His application for club membership was passed by the Committee on Friday 24th October 1892 at the regular meeting at 164 Sauchiehall Street when he was living in Coatbridge and his career is an example of consistency and persistence rewarded.   Success was not by any means immediate.   The first record of him winning anything is in 1902 when he was first in the Novice Handicap: ie first across the line not fastest time.   Novice races were held until the early 1950’s in Scotland and were open to athletes who not won any championship race.

The next references to him in club records or sporting press were in season 1903/04.   He began by winning the Two Miles Handicap in the Clydesdale Harriers Sports at the Partick Thistle ground at Meadowside Quay off 220 yards in 9:26.   Then in the Club 5 Miles Handicap he was third in the actual race behind Scottish internationalists James Reston and Robert Frew.   In the Scottish National Cross Country Championships at Scotstoun he was third and ran well in the English Championships at Haydock Park, Manchester.    The club handbook commented that he was “probably the most improved distance runner on the track” that summer.   He was club captain in 1904/05 and had a great record of success.   Club Champion at a time when the standard was very high, he was third in the National Cross Country Championships, first in the Five Miles Handicap and winner of the annual and highly esteemed Clydesdale Harriers Seven Miles Cross Country Handicap held from Scotstoun Showground.   At that time the Hannah Cup was won for the first runner in a points contest held over a series of races and Sam Stevenson won it in 1905.   On the track, he won the Two Miles in the Clydesdale Harriers Sports at Celtic Park ahead of A Aldred, the English Two Miles Champion but his best run had to be when he was second to Alfred Shrubb in the historic One Hour race at Ibrox Park on 5th November.   In the SAAA Championships also held at Ibrox he was first in the Four Miles in 20:56.8 and in the Ten Miles in 53:31.4.

By 1905/06 he was really running well.   When Alfred Shrubb ran the world’s best for one hour and ten miles at Ibrox in November 1905, Sam Stevenson was second and set a whole series of Scottish records at intermediate distances.   Still club captain he won the club championship and the Scottish Championships at Scotstoun, he won the club’s winter Two Miles Track race in 9:56.08, he was first in the Seven Miles at Scotstoun and again took the Hannah Cup.   On the track he won the SAAA Four Miles title in 20:41.4 at Powderhall in Edinburgh but was only second in the Ten Miles at Tynecastle.   1906/07 was a fallow time but he still managed to be club champion over the country and finish third in the national championships and in summer was second in the Four Miles to A Duncan.   He was of course a celebrity by now and like many other Scottish athletes was signed to advocate the benefits of various products.   For example in the programme for the Celtic Sports on 25th May, 1907, he was quoted as follows: “I have no hesitation in stating that athletes will obtain great benefit from OXO.   From personal experience I can recommend it without the slightest reserve.”   In 1907/08 he was again club champion and was second in the SAAA One Mile which was won in 4:33.8.  (It was a peculiarity of the time that only the winner’s times were given, even in national championships.) 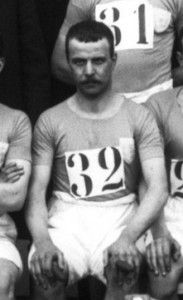 In 1908/09 he had stepped down as club captain but was still a committee member.   The standard in the club was very high and he was only third in the championships behind A McPhee and Sam S Watt.   He was third in the two miles flat but came the international championship he was one of five Clydesdale Harriers in the Scottish team which was fourth in the team race from Hampden Park.

Before the Olympics at London in 1908 there were a series of qualifying races in Scotland and he won his way through to a place in the team.   For the only time ever there was a Five Miles event.  There were six Heats with only two to qualify from each Heat.   He was placed third in Heat Five in 26:17.       Two Heat winners were timed outside 27 minutes and only ten men actually turned out in the Final.   He had the sixth fastest Heat time in the Games but failed to make the Final!   He was also entered, as were all the British Five Milers in the famous Dorando Pietri marathon with its controversial finish.    Probably because he had never run the distance before he was the only GB athlete not to start the race.

Although he ran on after the Olympics he was not seen again as a competitor after the 1914-18 War.  So complete was his disappearance that I have been asked by English writers of marathon histories – most recently Neil Shuttleworth who wrote such a book with Ron Hill – whether he died in the conflict.   The answer to that is that he did not – he appeared in a Clydebank Press column of 28th October 1932 where Tom Millar reported on a good inter-club run with Monkland Harriers at Clydebank the preceding Saturday and includes the sentence: “President Kirkland then called on Mr S Stevenson a one time stalwart of the club now with Monkland to present the prizes to the track winners throughout the summer.”    So there it is – mystery solved!   Whatever happened after the Great War he had set Scottish records, represented Scotland and Britain and raced some of the world’s greatest distance runners.