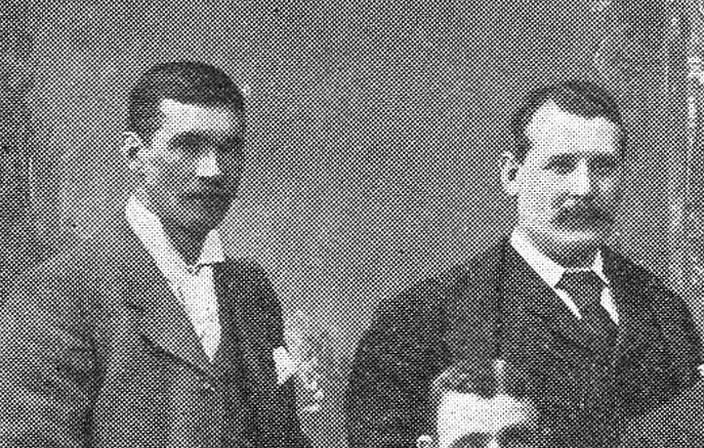 Given that the Rangers Sports was one of the longest running sports promotions in Scottish athletics history – it ran from 1881 into the 1960’s – and the importance of its place in athletics particularly after the second great war, it is maybe appropriate to note the origins in a separate page.   Note that the meeting spoken of was in 1881, two years before the SAAA was founded and four years before the first open athletics club appeared on the scene.   The following is from the ‘Glasgow Herald’ of 22nd August, 1881.

The first annual amateur athletics sports held in connection with this celebrated football club took place on their grounds, Kinning Park, on Saturday afternoon.   Splendid weather and a most attractive programme induced a large number to be present, though the grand stand was but partially occupied.   The sports were in all respects a great success, the two mile bicycle contest being one of the chief features.   There were five competitors, including DD Bryson, the amateur champion of Scotland, who rides splendidly, and in the last two laps received round after round of applause.   For the obstacle race, 24 entered, who were set off in three heats and a final, and as the difficulties proved rather trying to the competitors, few completed the distance.   At the start the men ran about thirty yards backwards, turned round and got over the first barrels by leap frog, the next were crept through, the hurdles were crawled under and leaped over as best they could, where fresh difficulties had to be overcome.   The first of these consisted of poles placed at an angle and resting on the top of  horizontal bar about 10 feet high, from which ropes were suspended, the poles were clambered up sailor fashion, the ground being reached by sliding down the ropes.   Further on, young trees, divested of branches, and supported at either end by trusses about 2 feet high had to be walked along, and as they were placed at a distance from each other, and about 35 feet long, the vibration in the centre caused most of the competitors to lose their equilibrium when they had to try again or give up.   The last obstacle was a horizontal bar over which the men had to throw a somersault.   When this was reached the best gymnast both in the heats and the final, was 30 or 40 yards in front, when he had an easy finish.   In the half-mile open handicap, JD Finlayson (QP) was defeated by McCulloch of Helensburgh, and though entered for the Mile he did not run.   A large field entered for the 100 yards open handicap, the running in which was very good.   The tug-of-war was different from the usual contest.   Instead of teams facing each other and pulling one rope in opposite directions to force their opponents over the mark, the new method consists of two ropes of equal length with loops at either end and securely tied together in the centre.   Four only compete at a time, each putting the fixed loop over his body and standing at opposite corners where flagstaffs are fixed in the ground about two yards behind.   All pull in opposite directions, the first who seizes his flagstaff and drags it from the ground to win.   The contest was most amusing.  All the other events passed off well.

The sports were under the patronage of the most noble the Marquis of Lorne, the Hon the Lord Provost of Glasgow, Dr Cameron MP, Mr A Crum MP, ex-Lord Provost Collins, and other gentlemen.   A source of attraction was the playing and singing   by the band of the 8th LRV.   Judges and Handicappers – Mt Livingstone and Mr Robertson.   Starter – Mr John Graham.   Timekeeper – Mr J Smith.   Clerks of Course – Mr McKay and Mr P McNeil.   Referees – The Sports Committee.

The important thing in any sports meeting however was how the events worked out and who the winners were.  The events in order here were as follows:

There was also a four-a-side football match won by QPFC who defeated Blackburn Rovers in the final.   The ‘Man of the Meeting’, had there been such an award, would undoubtedly have gone to that superb athlete Tom Vallance who won four events of widely differing natures.   He would go on to set the first recognised Scottish amateur long jump record a month later at the QPFC Sports with a leap of 21′ 11″.   At the inaugural Rangers Sports, his brother Alex was third in the half mile handicap and he would go on to win the SAAA 129 yards hurdles in 1888. 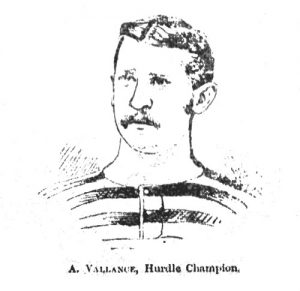 Mention has been made of Tom Vallance’s record long jump at the QPFC Sports on 3rd September, 1881.   It was not his only event that afternoon.    In the hurdles race, brother Alex was second in the first heat, then Tom won his heat by 6″ and then won the four man final from Turner (QP) and Alex was third.   He won the Broad Jump, as it was then called, in a new Scottish record of 21′ 11.   The high jump report comments that Vallance of the Rangers was ‘the first to succumb‘ but doesn’t specify which one it was.  The Games had their share of controversy too – JA Crerar of Third Lanark being second in the 440 and also in the 100 yards where many thought that he had been the winner, and even more disputation after Arthur Muir of Kilbarchan won the pole vault: he was alleged to be a professional competing under an assumed name with the result that the prize was withheld until the matter had been decided in Committee.   No doubt about either of Vallance’s victories though.   The star name was that of Englishman WG George who won the half mile and Mile.

The 1881 were the first annual sports but it is difficult to find a second annual sports.   There were several sports meetings every week that summer with Shawfield and Edinburgh Institution featuring every couple of weeks and at times every week.    The Glasgow Herald reported throughout the summer on Athletics and the chief sports each week were as follows:

By the time of the Queen’s Park Sports took place, the football season was well under way and no real sports would be held thereafter.   An interesting sideways glance tells us that the great miler WG George took part in the Queen’s Park Sports of September that year winning the Mile (easily) and the half mile but could only finish second in the quarter mile.   Rangers and Celtic Sports in years to come would regularly invite champions from England and Ireland but Queen’s Park was there first.   The south side of Glasgow was also served by the South-Western Football Club Annual Sports which were held at their grounds at Copeland Park, Govan.   The number of running events was limited to a sprint and a middle distance event and the main event was a four-a-side but a good number of the runners were from the football clubs – Rangers and QPFC as well as the sponsoring club.

The quest for the ‘Second Annual’ Sports can be seen at  this link .