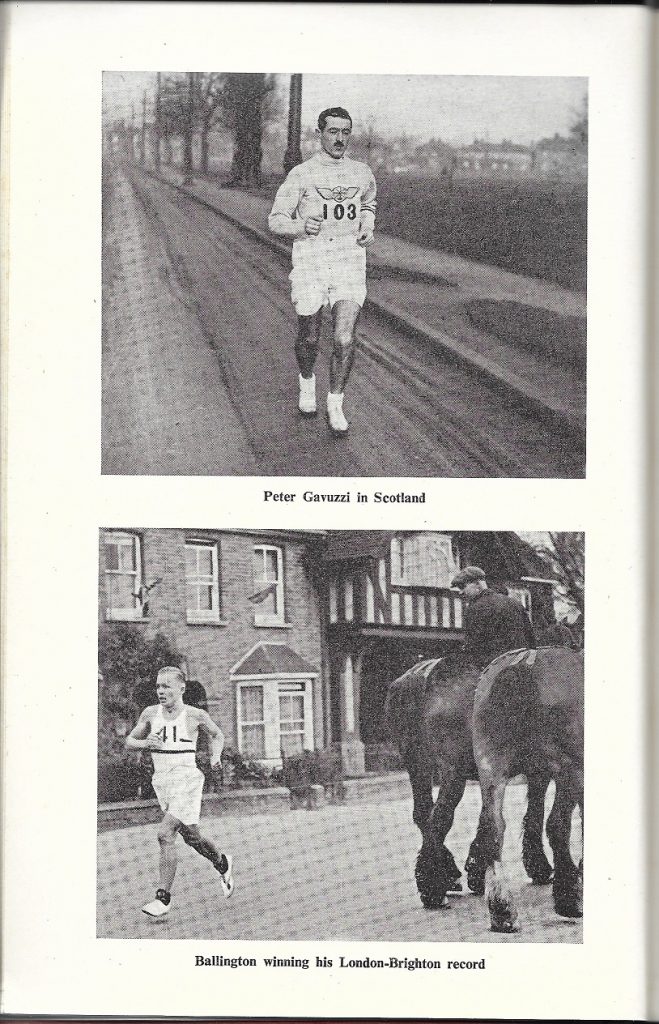 AFTER Paavo Nurmi’s record-breaking trip to America, Hugo Quist, who had arranged his tour, organised long-distance races in the States ; and for some months I worked with him to learn the ropes. One of his ideas was a six-day-and-night contest between teams of horses and teams of men—two to form a team—which was arranged to take place at Philadelphia.

There were five teams of runners and we had five teams of riders to contend against. No particular procedure was laid down and we could please ourselves as to how we carried on, whether with long periods of running or with short ones. The plan generally adopted was for one man to run for four hours on the track while his partner rested.

John Salo, the Finn who had won the second Transcontinental Footrace, and Joie Ray formed the first American team; Gavuzzi from Southampton, who had all but beaten Salo across the conti­nent, and I were partners in the British team. Among the other runners were McNamara, the hundred-mile indoor track record holder ; Granville, the Canadian walking-record holder (he was also a runner) ; Lin Dilks, who had put up the best time for hundred miles on the road in America, and others of the Transcontinental Footraces.

The course was an indoor track in the centre of which were tents where the competitors could, when they wanted to, sleep, rest or refresh as they liked. Outside this and railed off from it was the horse track wrhich had been specially prepared. I don’t know what the remuneration of the riders was, but the first two running teams were offered $500 (£100) per man to compete, and the others in proportion down to $100.

I gathered that public opinion generally favoured a walk-over for the horses ; but I, who had raced against riders on more than one occasion and knew pretty well what they could do, was quite satisfied that we could take things fairly comfortably and still emerge easy winners, but it wasn’t my business to publish that. I may say here that none of the runners betted a cent on any of their races, though we knew well enough that many of the public did so.

My confidence was based on the distance that had to be travelled. Had it been for twenty-four hours only we should almost certainly lose by a good bit ; a forty-eight hour race might have been a toss-up either way, with the balance on the side of the runners ; but when it came to a matter of hundreds of miles the horses just hadn’t a hope. What made it even more certain was that the horses were ordinary riding hacks from a local stable which were not in any way trained for such an exhausting ordeal, whereas the men, without a single exception, were.

We all arrived at the stadium ” rarin’ to go.” After the usual preliminaries—each of us was ” introduced ” and had to run an exhibition lap—we were lined up and given the signal to start. Salo and Gavuzzi opened the ball for the American and British teams while Joie Ray and I, after giving them a good tl once over,” went outside to a restaurant and had a good feed so as to be ready for our turn when it came four hours later. The riders were apparently in good fettle and when we returned we found them trotting steadily and already a mile or two in advance of the runners. Presently we went on to the track and our partners retired for their four-hour stretch. Always the horses increased their lead, yet we were quite unconcerned : we just kept to a steady 7½-8 miles an hour, knowing full well that we should eventually come out on top.

After twenty-four hours the riders had some fifteen miles in hand and began to take things more easily ; occasionally they’d drop into a walk fcr a few rounds. We couldn’t be sure of course, but guessed that they did so because they had to—the horses had already had more than enough of it. The walking periods became ever more frequent until, at the end of forty-eight hours the runners, without ever having altered their tactics or raced, had just about caught up.

This must have shown the stable hands what to expect, and with the permission of the authorities all the horses were withdrawn and a fresh lot substituted, though of course the public were not informed of the change. We runners didn’t mind a bit ; we still had plenty of vim and went on quite serenely. The second bunch of horses were evidently not as good as the first, which had probably been the pick of the stable, for they started tiring after only twelve hours of it, and the runners began to take the lead. It was evident that what obsessed the horses was nothing less than sheer boredom ; they could not see the object of circling and everlastingly circling that limited track. They lost heart completely and towards the end of the fourth day relapsed to a dejected walk and nothing the riders could do would snap them out of it.

The first batch of horses, which had by now enjoyed a forty-eight hour rest, were then brought back, but as they hadn’t entirely recovered from their former bout, the runners continued to pile on their lead. That was the finish so far as competition was concerned, the running teams ending up many miles to the good.

Presumably the failure of the horses had, however, its effect on the ” gate,” and for the last two nights the attendance had been so greatly reduced that the management foresaw a loss on the promotion. So after it was all over Quist called us together and explained the situation, asking us to be content to waive 25 per cent, of our earnings. I, too, pointed out that as professional runners we were dependent on promoters, and unless we met them reasonably and even generously, we could not expect them to arrange contests for us. This was so obvious that with very little discussion we all willingly agreed to accept the reduction.

It might interest you to know that the chief sufferers—physically —were the jockeys ; they told us it would take them all of a week to recover !