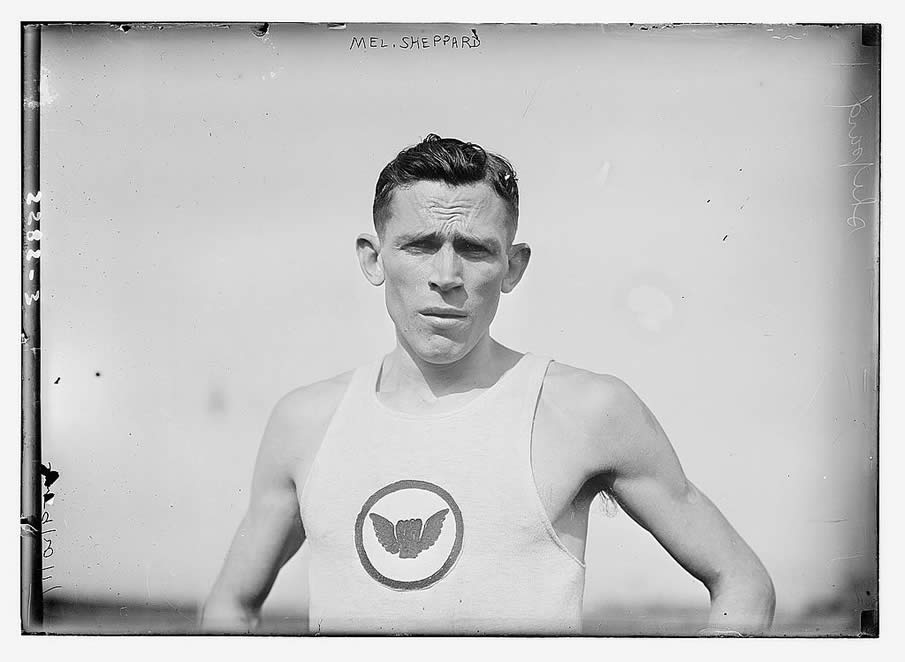 The 1905 Rangers Sports were held on Saturday 5th August before a crowd of 8000 which, according to the Press, was evidence of public apathy.    There were athletes of genuine class taking part including a small party from Pennsylvania including hurdler EA Amsler, English athletes like George Butterfield and some outstanding Scots like Stronach the hurdler and TR Nicolson the hammer and shot star.   Came the Monday session and there was a crowd of 5000 present.   The report in the ‘Glasgow Herald’ read:

“The Rangers Football Club continued their sports last night on Ibrox Park before 5000 spectators.   The running throughout was good, the feature of the meeting being the 100 yards handicap which was won by JC Howie of St Mirren FC off 10 yards, Amsler of Pennsylvania University being only a few inches behind, with Stark, the Scottish champion, third.   In the third heat of the 440 yards handicap, JR Taylor of Pennsylvania University gained a popular victory, but in the Final could make nothing of Charles McLachlan of Blackheath Harriers who was beaten for first place by RW Hepburn of West of Scotland Harriers, off 14 yards, by half a foot.”

The meeting included a 120 yards flat handicap for 15-17’s with six heats, 100 yards open handicap with 18 heats in which all sprinters of whatever standard took part with the best American and English men competing with all standards of Scottish runners and a 440 yards handicap with multiple heats.   There was of course also a 5-a-side tournament which was won by Rangers from Queens Park.

A year later the star attraction was Wyndham Halswell who won the 440 yards in 50.2 (headwind up the finishing straight)  with Stark winning the 100 yards in 10 seconds and McGough the half-mile in 1:58.8.   A very good meeting was the verdict and on the Monday, the ‘feature of the meeting’ was the running of George Butterfield in the 1000 yards.  A word about Butterfield is maybe appropriate at this point.   He was an Englishman (born in Stockton-On-Tees in 1879) who won the AAA’s mile title in 1905, 1906 and 1907, he also ran the world’s fastest mile in 1906 and ran in the London Olympics in 1908 in both 800m and 1500m.   There was a considerable body of knowledgeable opinion that favoured him for at least a medal in the Olympic 1500 but the London organisers had decided that only heat winners would go into the final.   The Americans, among others, protested about this but it stood, and the draw for heats was made in secret.   Butterfield was drawn in the same heat as America’s  Mel Sheppard who won the heat in a new Olympic record time of 4:05.0.   It was a bit of a travesty with several athletes mush slower than Butterfield making the final simply because they had been drawn in a slower heat.   He died in the First World War serving with the Royal Garrison Artillery.  Local papers were fond of the story that he once raced a greyhound – and the dog was second!   Butterfield was a favourite at Ibrox where he raced several times over the years and his London conqueror Sheppard was also highly thought of by the Ibrox crowds.

The Monday meeting in 1907 was a purely domestic affair but none the worse for that.   The report simply said that ‘The Rangers Football Club continued their sports last night at Ibrox Park.   The weather was excellent and there was a capital attendance.’    And that was it.   The results were listed showing that there was a 100 yards handicap with 12 heats, a 1000 yards handicap, a 220 yards handicap with 6 heats, a one and a half mile handicap plus the 5-a-sides in which Celtic won over Third Lanark by 2 goals to 1. 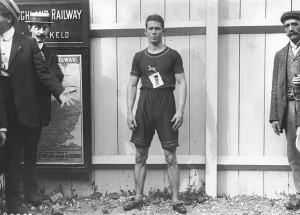 In 1908 quite a few Olympic athletes (the Games were held in London) stayed over and competed around the country for several months afterwards.   The Rangers Sports had some real top notch athletes competing – Reggie Walker and Mel Sheppard being those who created most interest.   The report on the Monday night meeting on 3rd August 1908 read:

“The Rangers FRC continued their sports last night on Ibrox Park and were again favoured with splendid weather.   The crowd, which numbered close to 10000, witnessed some splendid racing, the features of the meeting being the magnificent running of RE Walker, of South Africa, in the final of the 100 yards flat handicap, and the splendid performance of MW Sheppard of the USA Olympic team, and the 800m and 1500 metres champion, in the half mile scratch race where he created a new Scottish all-comers record for the distance.   In his heat of the 100 yards handicap Walker equalled his record of Saturday – 9.4 seconds.   In the final J Spittal, of West of Scotland Harriers, off eight and a half yards, looked the winner, but in the last 20 yards Walker put in one of the finest efforts seen in Scotland for some time and won at the tape amidst the greatest enthusiasm.   Sheppard’s effort in the half mile was also a notable achievement, his long stride and easy movement creating a most favourable impression amongst runners and spectators alike.   The American’s time was 1 min 56 sec , the previous best in Scotland being 1 min 57 1-5th sec by LF Fairbairn-Crawford at the same ground last year.”

“Half Mile Scratch Race: This event was arranged to give MW Sheppard of the USA Olympic team, and winner of the 800m and 1500 metres at the OIlympic the opportunity of lowering the Scottish all-comers record.   He had as pace makers George Butterfield, Darlington, and John McGough,  Bellahouston, the latter going the first quarter in fine style.   Sheppard covered the first quarter in 56 1-th sec.   In the last lap McGough dropped out and Sheppard went on at great ace and finished in 1 min 56 sec, and beat the previous record by IF Fairbairn-Crawford made last year in the Irish International, also at Ibrox Park.   Sheppard had a great reception at the finish.”

There was also a 1000 yards flat handicap won by HT Jamieson (Watson’s College – 20 yards) in 2:16 from Sam Stevenson of Clydesdale Harriers (off 26 yards): McGough and Butterfield were both entered but neither started.   There were twelve heats of the 100 yards, result above, nine heats of the 220 yards, a mile and a half handicap in which Sam Stevenson (55 yards) was third behind Templeman of Bellahouston (110 yards) and Young of Paisley Harriers (170 yards) and an invitation quarter mile handicap in which Halswell (off scratch) finished third in 49.8 behind  Young (Bellahuston – 18 yards) and Hepburn (West of Scotland – 27 yards).   The obligatory 5-a-side had the six Glasgow clubs in it (Rangers, Celtic Queens Park, Third Lanark, Clyde and Partick Thistle) and, just to show that the draw was random, Rangers met Celtic in the first round and won 3 – 1.   The final was won by Clyde who beat Third Lanark by 2 goals and 1 point to 1 point. 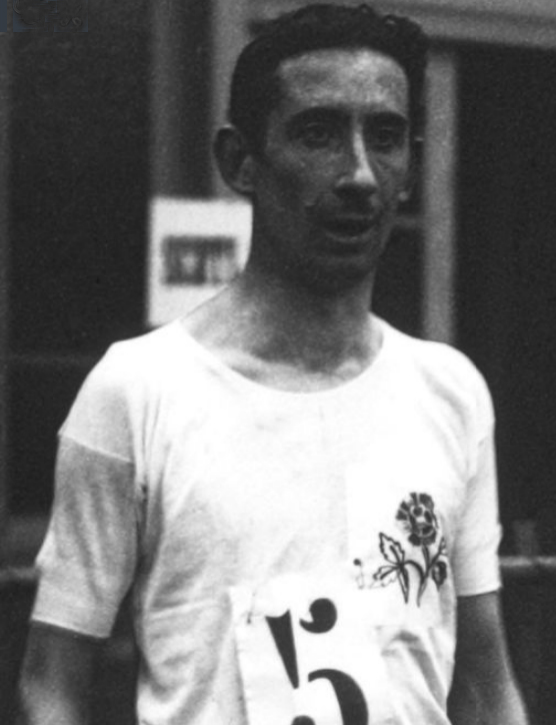 The last sports of the decade held the Monday meeting on 9th August.   It was a great success although the crowd was ‘only’ 6000.   Seven record set on the night and top class runners including Olympic medallists Walker and Robertson to entertain the crowd.

“The Rangers FC brought their annual sports to a close last night on Ibrox Park.   The weather was again fine and the attendance numbered 6000.   During the evening no fewer than seven new records were created and the racing throughout was of the highest class.   Chief honours lay with the Olympic champions RE Walker of South Africa who is in magnificent form and set new records in the 120 yards and 150 yards distances – performances which were enthusiastically cheered by the crowd.   In the three miles walk no fewer than three new records were created.   In the 1000 yards flat race, Adam Turnbull of the Clydesdale Harriers beat McGough’s native record, while  in the mile and a half flat handicap Arthur J Robertson of Broughton Harriers broke Alfred Shrubb’s record for the distance made at the same track in 1904.”

Robertson actually finished third in the race running from scratch behind club mate William Scott of Broughton Harriers (75 yards) and Tom Jack from Edinburgh off 80 yards.   There was a local runner  from a club that I had never heard of called ‘Glasgow Hairdressers AC’ competing in the 100 yards and although he won his heat of the 100 yards, was unplaced in the semi final.   Still, a very good meeting to end a decade of top class athletics.