John Astley Cooper was born in Adelaide in 1858 but lived all of his adult life in England where he died in 1930.   He is listed in the Oxford Index as ‘a propagandist for athleticism’ and it is this role that affects the appearance of the British Empire Games. 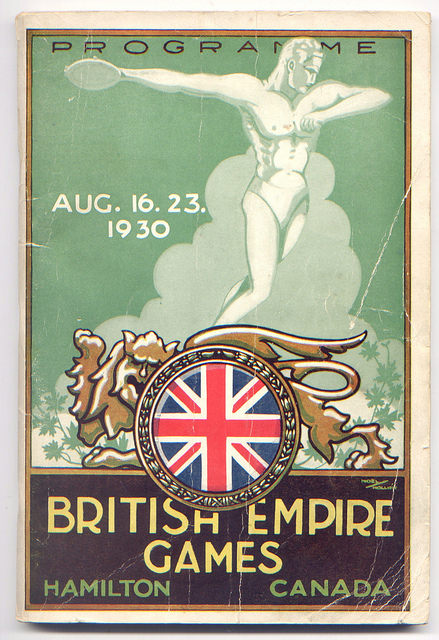 In 1891, John Astley Cooper proposed the establishment of a periodic festival to celebrate the industrial, cultural, and athletic prowess of the Anglo-Saxon race.   He publicised his idea of a sporting event that would include the British Empire and include the United States wherever he could.  Notably he wrote letters and articles in ‘Greater Britain’ of July 1891, a letter to The Times in October of the same year, and articles in ‘Nineteenth Century’ in September 1892 and July 1893, suggesting a Pan Brittanic, Pan Anglican Contest every four years as a means of increasing goodwill and understan’ding of the British Empire.   The scheme was one of many designed to strengthen links within the Empire, but its uniqueness lay in the fact that although he saw it as having three aspects – industrial, cultural and sporting – the athletic portion soon overshadowed the other two aspects, and Cooper’s Pan-Britannic Festival concept was the first detailed plan of a multi-sport gathering for the Empire to appear in print.

When Baron Pierre de Coubertin was working up the concept of the Olympic Games, he asked for ideas and comments from many people and in England he visited Much Wenlock and discussed their version of the Olympics, and also visited and spoke with Cooper.   But where Cooper’s Games were ethnic in nature and had the aim of strengthening and celebrating the Empire, de Coubertin’s Games were much wider in concept.

In 1911, the Festival of the Empire was held at The Crystal Palace in London to celebrate the coronation of George V. As part of the Festival of the Empire, an Inter-Empire Championships was held in which teams from Australasia, Canada, South Africa, and the United Kingdom competed in athletics, boxing, wrestling and swimming events.   Cooper’s ideas were known throughout the Empire and this was especially the case with Australia where Richard Coombes in particular advanced the cause.   Coombes had been born and educated in England and moved to Australia in 1886.   He was heavily involved in athletics, helping to found the New South Wales AAA.   He wrote many articles supporting the notion of a Pan Britannic Festival under several different pen-names and his version included rowing, running and cricket.   Katherine Moore of Queeen’s University, Belfast, in a paper entitled ‘One Voice in the Wilderness: Richard Coombes and the Promotion of Pan-Britannic Festival Concept in Australia, 1891-1911′ sad of Cooper’s letter to ‘The Times’ in 1891:

The Times published a letter in which Cooper sought to present his concept in a more precise form. The industrial and culture sections of the proposal were outlined in some detail, but this article will concentrate on the sporting suggestions. The future relationship of the various portions of the Empire, wrote Cooper, rested chiefly in the hands of the young men of the Empire, including young England, young Australia, young South Africa, and young Canada, and an Imperial athletic contest would be very attractive to most Englishmen whether settled in the United Kingdom or resident  beyond the seas.  This certainly proved to be true in the case of Richard Coombes. The proposed athletic contests initially included rowing, running, and cricket, that great Imperial link. The argument for Cooper’s Pan-Britannic Festival was strengthened by his perceptive comment that the cultural, industrial and athletic links already were in existence, and he was merely identifying some funding schemes whereby those ties could be made firmer by coming together periodically for a celebration of Imperial achievements”

Moore’s paper is easily found on the internet and anyone with interest in the genesis of the Commonwealth Games should maybe read it.

Bobby Robinson of Canada took up the cause fter the 1930 Olympic Games where he was incensed by the behaviour of the Americans and Germans and is the one generally credited with starting up the British Empire Games.   When the announcement of these Games was made, Astley Cooper claimed much of the credit but his aim had been ‘to show through a Festival of sport and culture that Anglo-Saxons ruled the world.   Americans would have been invited, there would have been cricket matches, and an Imperial Holiday.’  [The quote is from Brian Oliver’s book on ‘The Commonwealth Games’ , 2014]

Oliver continues: “Robimson, three years old when Cooper wrote his letter to ‘The Times’ to set out his plans, would have been intrigued by a report in ‘The Observer’ in 1929 looking ahead to the Games in Hamilton.   ‘Mr James Astley Cooper is known in diferent parts of the Empire as the pioneer of this project,” wrote the correspondent after interviewing Astley Cooper, then in his seventies.   Astley Cooper then said “I am satisfied with indirect results, as far as they have been obtained.   Though my scheme did not attain in fulfilment … as I planned, I have done some spade work for the idea of the Imperial Games for the British peoples.  He made no mention of Canada or Bobby Robinson.

British newspaper readers were left in no doubt after the Games, Canada had ‘cut herself loose from the American orbit, and given a lead to the Empire that should inspire British sportsmen all around the globe.’.   Harold Abrahams, the British sprinter who won Olympic gold in 1924 before becoming one of the most influential voices in athletics in the first half of the twentieth century put the record straight.   “But for the unbounded enthusiasm and persistency of Mr Robinson”, he wrote, “the whole thing would never have started.”

Despite all the articles and discussions, Astley Cooper did not live to see his dream fulfilled – he died six months before the inaugural British Empire Games were held in Canada in 1930.