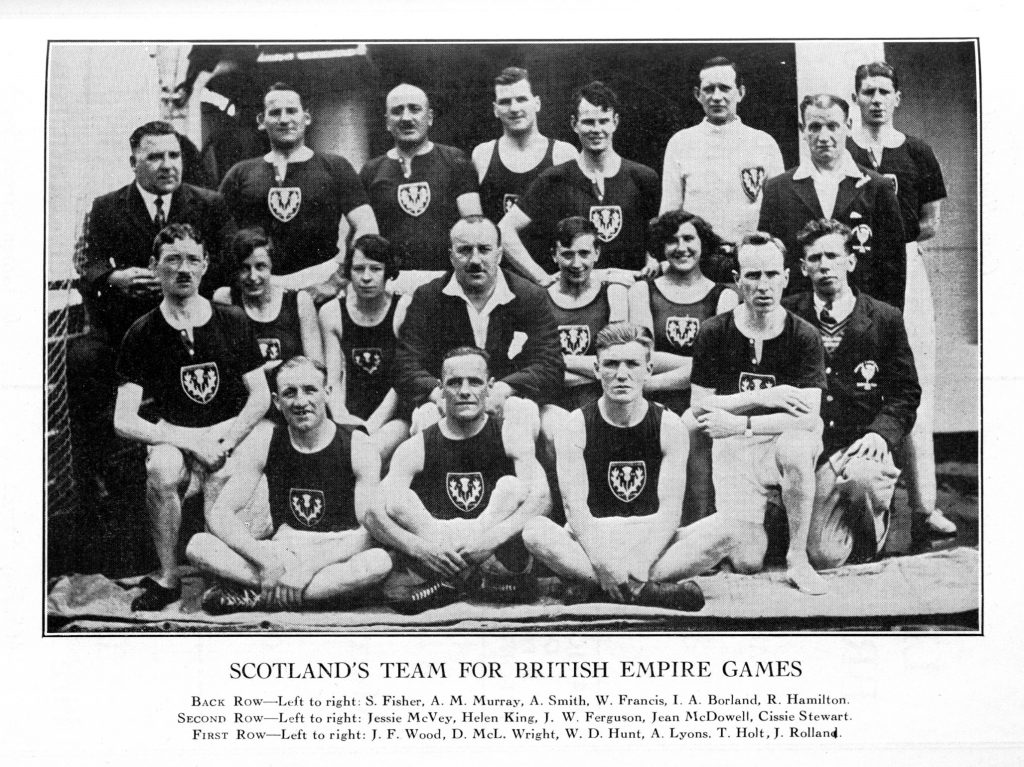 The above picture, taken on the boat across the Atlantic, has a caption that is a bit misleading: eg JF Wood is kneeling on the left, and Dunky Wright is kneeling on the right of the front row.   The very first Commonwealth Games squad to represent Scotland.  Ten other countries took part: England, Canada, South Africa, New Zealand, Australia, Scotland, Wales, British Guiana and Ireland.   Teams are listed here in order of the number of medals won.  The Scottish medal tally was three golds, three silvers and five bronze.   This was across all sports.   The sports covered were Aquatics (Swiming and diving), Athletics, Boxing, Lawn Bowls, Rowing and Wrestling.  While the Olympic Games used metric distances, the British Empire used (what else?) Imperial Measure Distances.

The new competition needed a mission statement and this is what they came up with:

It will be designed on the Olympic model, both in general construction and its stern definition of the amateur. But the Games will be very different, free from the excessive stimulus and the babel of the international stadium. They should be merrier and less stern, and will substitute the stimulus of novel adventure for the pressure of international rivalry.

The opening of the Games was reported by Jamie Bradburn in The Torontoist as follows:

“Around 17,000 people attended the opening ceremony at Civic Stadium on August 16, 1930. Eleven teams paraded in, stretching from British Guiana (now Guyana) to New Zealand, with the Canadians decked out in dark red blazers, green ties, and white pants. Prime Minister R.B. Bennett relayed greetings from the King and other British dignitaries who couldn’t attend. Hamilton mayor John Peebles was peeved that no city officials were allowed to speak.

At 2:30 p.m., Governor-General Viscount Willingdon officially declared the games open, observing that “the greatness of the Empire is owing to the fact that every citizen has inborn in him the love of games and sports.” A Torontonian won the first medal of the games a few hours later. George “Spike” Smallacombe, who was based out of the West End YMCA, won gold for a 48.5 foot leap in triple jump.”

In the 100 yards, Canadian Percy Williams was first in 9.9 seconds while his team mate Fitzpatrick was third; they were split by an Englishman EL Page.  Roy Hamilton of Scotland was fourth in Heat two and did not qualify for the final, while team mate Ian Borland did not start.    Up a distance, in the 220 yards, the order was England (Englehart), Canada (Fitzpatrick), and South Africa (Walters) with Borland in heat three out of qualifying.   The quarter-mile Borland, third in the first heat, failed to get beyong the single race.   In the half-mile Tom Riddell failed to qualify and in the Mile, there was only Robert Sutherland who finished sixth.   Sutherland ran better in the Three Miles, finishing fourth and missing bronce by two fifths of a second.   Distance men are made of stern stuff and Sutherland was also fifth in the Six Miles, one place behind JF Wood for Scotland.   There were no Scots in the steeplechase, but Dunky Wright ended the medals drought when he won the marathon by over half a mile from England’s Sam Ferris.   There were no Scots in either of the hurdles races, nor were there teams in either of the relays.   In the field events, there were no representatives in the shot, discus or javelin but in the hammer Alexander Smith missed bronze by 6 inches and Archibald Murray was fifth, 5 feet further back.   There were no Scotsmen in any of the four jumps events.   The traditional Scottish strengths – distance running and hammer throwing with some sprinting – were to be seen in this, the very first Games. 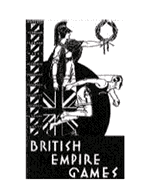