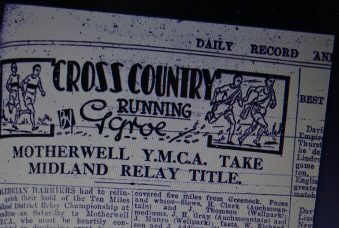 Were you a sportsman in the 1920’s and 1930’s the name of Ggroe would have been familiar, had you been an athlete, especially a cross country runner in the same period, it would have been very familiar.   It was a time when almost every sports writer  had a pen name – by-lines were pretty well unheard of.   Line drawings to accompany the articles were the norm.   You can see several things from the headline above: the writer’s name was above the headline.   The surrounding drawing was large enough to ensure that it was also more prominent and the drawing was appropriate to the article.   Ggroe however was none other than former international athlete, top class official and administrator George Dallas of Maryhill Harriers, and he wrote in Glasgow’s Daily Record.

He covered many races, mainly in the West of Scotland and the two illustrations here are from his coverage of the Midlands District Cross-Country Championships.   He also covered the national championship on several occasions.    There is however no doubt that he was at this time entirely a reporter – which is what the sport needs on every Monday morning for 52 weeks of the year.    He wrote well and his race descriptions are detailed, comprehensive and accompanied with as many results as he could get into the paper.      What did a typical Ggroe report look like?

The report to go with the headline above read:

“Plebeian Harriers had to relinquish their hold of the Ten Miles Midland District Relay Championship at Hamilton on Saturday to Motherwell YMCA who must be heartily congratulated on displaying great form to best the holders by 150 yards in 60 minutes 19 seconds.   WJ Gunn (Plebeian), WS Fisher (West of Scotland) and R Graham (Motherwell YMCA) were the leaders at the end of the first ciruit of two and a half miles of a very trying course in the snow.   SK Tombe, JB Tait and W Gardiner were their respective club colleagues who took over for the second lap.   Before a mile had been traversed, Gardiner for Motherwell, went into the lead, Tombe of Plebeian doing his best to hold him.   AH Blair (Maryhill) was in a favourable position.   Going for the third lap, H Maitland who took over from Gardiner, was in a practically unassailable position.   T Clark, Plebeian, could make no impression, indeed he lost ground.   Dunkey Wright, Maryhill, was given the difficult task of trying to reduce a gap of 90 yards between him and the leader.   In the end JNH Gardiner crowned a brilliant achievement for Motherwell YMCA in gaining the verdict over Plebeian in a decisive fashion.”

That report took up just 35 lines.   The results which followed took up 66 lines for the team results, and 25 lines for the individuals.   The club results took the form of teams in order with names and times for each of the first 20 teams with places and time for the last six teams.   Reporting of the highest order.   It was of course a different era with different priorities but George had been a runner for many years, he had also been an administrator and official at many races thereafter and he knew what the athletes and their clubs wanted and needed.   His target readership was almost certainly the athletics and cross-country population.   Available space might be bigger but regardless of the space available, 62% of the available space was given over to detailed results.

It was a typical Ggroe report.   The War ended Ggroe’s career but not George Dallas’s. 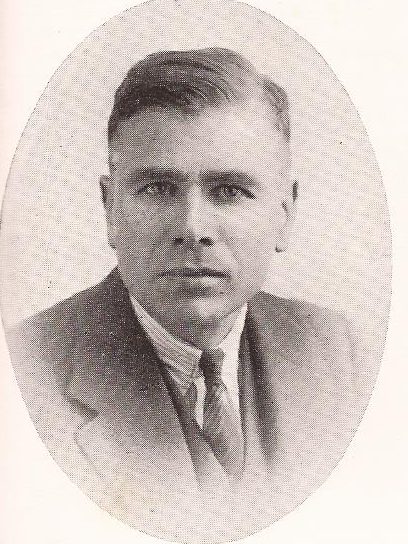 .When Walter Ross started’ The Scots Athlete’ magazine in a time when newsprint was rationed in 1946, George was one of those he turned to for support.   Issue number 4 saw a front page article by George which showed what a good writer he was.   The photograph at the head of the article is above.  Part of the item is reprinted here.

First of all let me congratulate the authors of this splendid periodical – a much felt want – in these days when newsprint is so limited and affecting our usual mediums of publicity which undoubtedly helps to liven our movement.   May the Editor and his able assistants succeed in staying the course and weather the uncertainty and arrive at the goal when it can be said that ‘The Scots Athlete’ is now a self-supporting organ maintained by those who have the right to sustain its lifetime.

Noe for the review of the fifty fourth championships for which I was invited to make a modest contribution.   After a lapse of seven trying years in our lifetime, the Scottish Amateur Athletic Association resumed their annual championships at Hampden Park by kind permission of Queen’s Park Football Club .   On the last occasion, in 1939, the youths series of tests were linked to this fixture.   This year, however, it was deemed advisable to separate the classes, and I think it was a wise decision, and in some respects at least, it may be said that the results have justified the steps taken.   Athletically and financially, both the Youths Championship at Edinburgh on June 8th, and the Senior fixture on June 21st and 22nd,  paid handsome dividends that exceeded expectations.   Both efforts have substantially augmented the coffers of the Association, and I would venture to say that moneys accruing therefrom may figure in the region of 70% of the total liquid assets standing in the name of the SAAA – a position never before known in the history of the movement.

So much for my remarks on the material side of the programme.   What about the athletic analysis of the first post-war venture?   Do results suggest an early return to pre-war standards, and are the prospects bright enough to hope for the day soon when Scotland may be able to play more than an ordinary part in International Athletics?

Certainly we have one or two personalities capable of making their mark in the field of first class competition.   Undoubtedly Alan S Paterson, Victoria Park AAC, H D McD Clark, Greenock Wellpark Harriers, and John B Panton, also of Victoria Park, emerge at once as a trio qualified for the special attention of the experts looking ahead for Olympic possibles.”

Dallas then went on to look at individual events and competitors.   The above is approximately half of the  article but it serves to illustrate the quality of his writing – a bit verbose for the twenty first century perhaps, but well in keeping with the best journalistic standards of the time.

He covered several big events for Walter’s magazine but also wrote for the ‘Glasgow Herald’.   The Edinburgh to Glasgow Relay was re-started in 1949 with two runs over the course and in 1950 the report, although uncredited, was almost certainly the work of Dallas.   At a time of severely rationed newsprint, the report ran to 41 closely printed lines of which 15 were the report.  Simple arithmetic tells us that there were 26 left for the results!   Places, clubs, every individual in the club plus their individual times and the aggregate time was given for the first five clubs.   Thereafter only the sixth team was noted with its aggregate time.   There followed the fastest times on each stage for which the start and finish point of the stage was give, the distance of the stage, the name, club and time of the fastest man on that stage.   It was a pretty comprehensive result when there a serious shortage of available space.   Again, no mention of the writer, no opinions, just straight reportage.

It is at times easy to dismiss reporting as inferior to ‘journalism’ in some way, but on a Monday morning, especially after a big race or championship, runners need these results and information.   I used to run every Sunday with a good pack and the start of every two hour run (most Sundays) was spent analysing the results from the previous day’s race.   One of our number had a good head for figures and he could recite details that the rest of us had barely noticed, if we noticed them at all.   George was an outstanding reporter at a time when the sport needed one.   Aye, and we could maybe do with one now who prioritised facts over opinion on a Monday morning.