“The Annual Sports were held at Ibrox on 27th May, 1911, and were very successful from an athletics standpoint.   Boxing and Wrestling contests were included in the programme, and not only were we able to make ends meet, but we cleared a few pounds as a result.”

“With the exception of R Quinn’s two miles record in the walking competition nothing striking was witnessed at the Clydesdale Harriers Sports at Ibrox Park on Saturday” was how the Glasgow Herald began its coverage of the sports.   It was however a good meeting with several current or future Scottish champions taking part – eg the half mile had A McPhee of Clydesdale Harriers and George Dallas of Maryhill among the finalists but they were unplaced with victory going to Clydesdale’s Maguire.

“The Annual Sports at Ibrox, on 25th May, were very successful from every point of view.   We held a second meeting at Clydebank and, although the weather was unfavourable, we came out on the right side financially, while athletically we created a record, being the only Club in Scotland to hold two Open Athletic Meetings in one season.”

This was all very well but the reports of the event did not indicate any real class athletes taking part.    The competition was good and the crowd found the events ‘riveting’.  Certainly the numbers of entries were satisfactory – there were exactly 100 for the 100 yards  There was a three miles flat handicap won by Hughes (West of Scotland) – a popular win     P McGregor of Clydesdale won the open half mile off 48 yards but  there was more coverage given to WM Crabbie of Edinburgh Academicals (20 yards) who was a provisional selection for the Olympic Games.   Crabbie won his heat but apparently did not show the same judgment in the final, although reports also said that he was ‘jostled’ once or twice, and lost when he might have won.   Allan Glen’s School won the relay race and their high jumper W Weir won the event with a 5’4″ clearance.   The two miles walk was won by Clydesdale’s Alex Justice who seemed at this point to be the perennial runner-up (walker-up?) to Motherwell’s Quin.   Quin had the better of him but when Quin was absent, Justice usually was able to beat all comers.

“Our Annual Sports meeting, held at Ibrox Park on 31st May, 1913, was an unqualified success.   From an athletic standpoint nothing better could be desired, while thanks chiefly to the special attraction of the International Boxing Match, the club came out well on the right side financially.

We held a second meeting at Clydebank, on 21st June, which was athletically a great success.   Unfortunately, owing to counter attractions in the district on the same day, the attendance was not as good as expected, and the club lost a few pounds on the venture.”

The 31st May meeting was ‘favoured with excellent weather’ and there were between 2000 and 3000 spectators.   There were 96 entries in the 100, 73 in the 220 and 56 in the half mile.   There was a two miles team race for teams eligible to run in a district cross-country race, and six schools – Allan Glen’s, Bellahouston Academy, Dumbarton Academy, John Street Higher Grade School, Paisley Grammar and St Aloysius College – contested a relay race.   There were not one but two boxing matches.   Unfortunately, due to the track being remodelled, the events were run on the grass.    The Two Miles was won by Bellahouston from Clydesdale with Greenock Glenpark Harriers third.   The individual winner was Duncan McPhee of Clydesdale from Lindsay of Bellahouston. 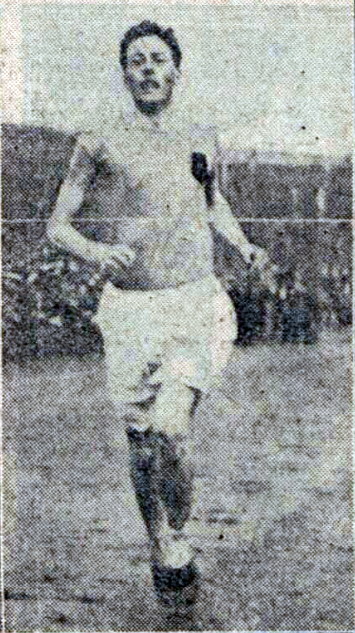 The 1914 meeting was held on 30th May.   It was the old story – a good programme but with a disappointing attendance.   Entries were big and races close but the crowds were absent.   In the 100 yards there were 24 heats and 4 semi-finals and in the other event with a very big turn out, George Dallas of Maryhill and West of Scotland won off 14 yards from  Duncan McPhee (Clydesdale Harriers and West of Scotland, scratch) .   In the two miles team race Greenock Glenpark defeated Clydesdale Harriers (the reverse of other races that summer).   Alex Justice (Clydesdale Harriers) won the One Mile walk off scratch in a new Scottish record of 6:42.4.   Allan Glen’s won the schools relay from Hillhead High School.

By the end of May 1915 hostilities had been continuing for some time and the Clydesdale date at the end of May was being used by Morton FC at Cappielow Park where before an attendance of over 4000 the competitors, of whom the reporter said many were under-trained, there was some good sport.   There was a 100 yards, 220 yards, 880 yards, two miles and a five a side tournament featuring Morton, Clyde, Queen’s Park, Rangers, Celtic, St Mirren and Third Lanark.   Morton beat Rangers in the final by 3 goals to none. 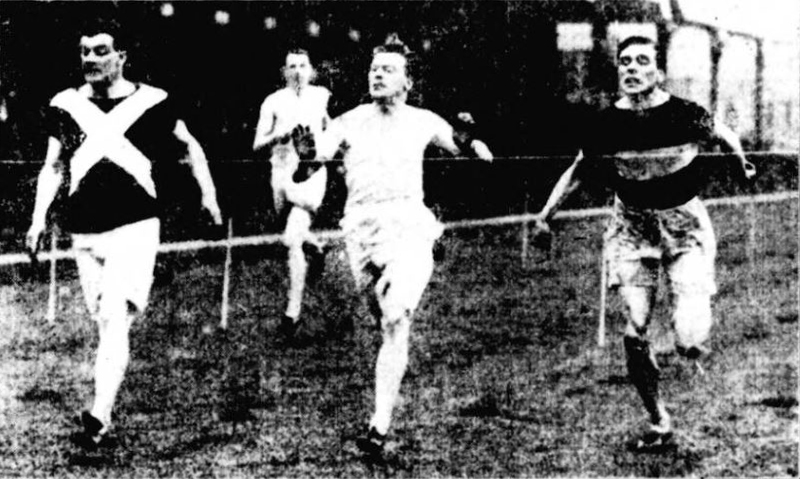 Clydesdale Harriers decided at a Committee Meeting later in 1918 to suspend all activities sine die for the duration of the War and although there were sports meetings held during the War, most including races confined to servicemen or organised as a means of raising money for the War Effort in some way or other (see the pages on this site about the Rangers FC and Celtic FC Sports at the time), all serious sports meetings were suspended.