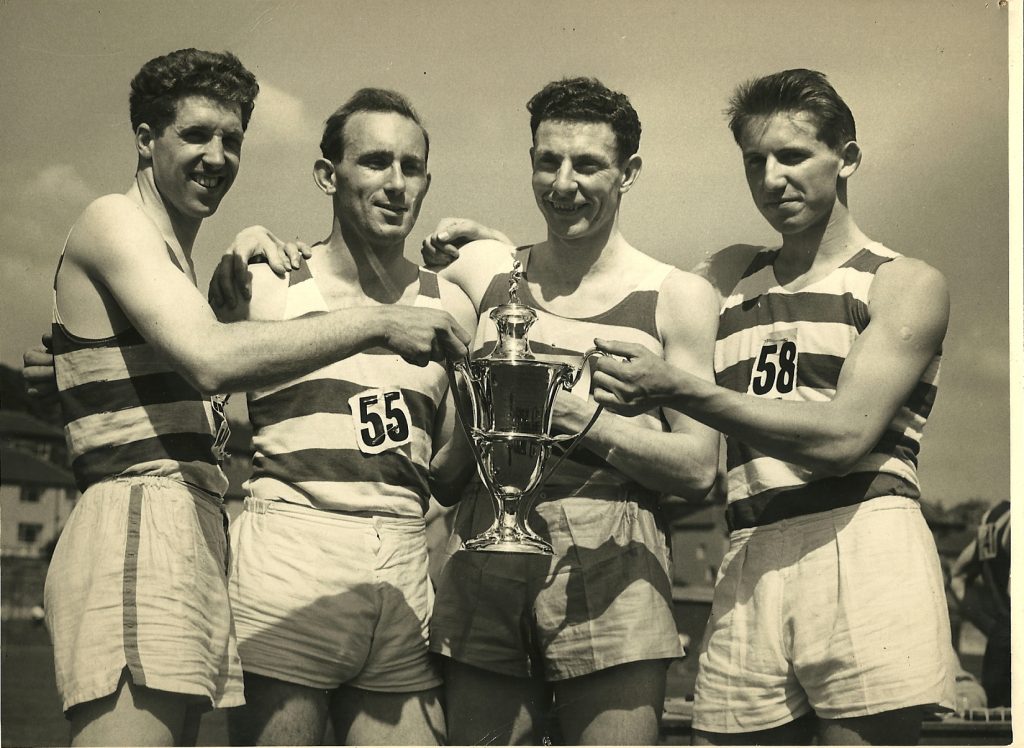 The medley relay remained a very popular event after the war and many sports and athletic meetings had it in their programme.  There were inter-club races,  there were medleys for senior men, senior women,  junior men, inter-area, inter-city, inter-works relays and various others.   Then there were the SAAA Championship events that the crowds had flocked to see.   Unfortunately, the new governing body did not want to have them at the SAAA track and field championships.   They were farmed out all over the place – to Helenvale for the Transport Sports on a midweek evening, to the Police Sports at Ibrox, to Shotts Highland Games, and to the Junior Championships.   They were run on proper tracks – but also on narrow tracks with no lane markings.   The way they were shuffled around was nothing short of a disgrace.   The current situation is that there is no official list of dates or venues  of these championship events.   What is noted here is what I have been able to dig up from the internet, from old ranking lists and back numbers of newspapers.   Apologies for the gaps which will be filled as the information becomes available.

1948’s SAAA Junior Championships were held at New Meadowbank which pleased just about everybody who had been to the 1947 version at Rugby Park, Kilmarnock.   Both senior relays, 4 x 110 yards and the medley (800, 200, 200, 400) were contested – the 4 x 110 being won by Edinburgh University from Victoria Park and Shettleston in 43.8 seconds.   The winning team was AT Bruce, St C Taylor, JL Hunter and DD MacKenzie.

For the longer one, James Logan commented on the medley relay for ‘The Scots Athlete’ “In the Mile Medley Relay J Smart confirmed his position as Scottish champion by laying the foundation of Edinburgh Southern Harriers victory with a fast ‘half’ and the other members of the team carried on the good work.   The time 3 minutes 36.8 seconds was first-class as this event was run in a rain storm.”   The winning team was J Smart, HW Mercer, J Thomson and J Crow.   Victoria Park was second and Glasgow University third.

The medley relay championship in 1949 was moved to Helenvale Park and held on on 27th June.   It was a Wednesday evening and the occasion was the Glasgow Transport Sports and was notable because a new record for the event was set by the winnng Glasgow University AC team (T Begg, RM Ward, JPH Paton and DK Gracie) of 3:31.7 which was 1.2 seconds inside the time set by Bellahouston in 1938.

They were back at the  SAAA Junior championships when they were held at New Meadowbank on 8th July in 1950 and both sprint and medley relays were held in the course of the afternoon.   The medley relay was won by a good Glasgow University team of T Begg, RM Ward, R Dow and DK Gracie in 3:32.4 and Edinburgh University won the 440 yards relay in 43.4 seconds.

New Meadowbank was the venue on 7th July, 1951, the SAAA Junior Championships the occasion, when the medley relay, along with the 4 x 110 yards was contested.   Victoria Park’s team of W Jack, R Quinn, W Kennedy and W Christie (pictured above) won the shorter race from Garscube Harriers and Edinburgh University in 45 seconds.  This was the start of something big.   It was the start of a series of relay triumphs that is unlikely, even 60 years later, to be beaten.  Nine wins in succession and ten out of eleven.   Astonishing.

In the longer race, the Scotstoun team had to give best to Edinburgh Southern Harriers who won in 3 minutes 31.7 seconds with a team of J Smart, J Pearson, J Hardmuir (?) and J Crowe.   Victoria Park was second and Glasgow University third.

The medley relay plus the sprint relay were back again at Helenvale on 12th July, 1952 and incorporated into the SAAA Junior track and field championships.   Both were won by the same club – Victoria Park AAC from Scotstoun on the other side of Glasgow.   In the 4 x 110 their squad was G McDonald, R Quinn, N Wilson and R Whitelock and they won in 44.2 seconds from Garscube Harriers in second and Shettleston Harriers third.   In the Mile Medley, their squad consisted of F Sime, R Quinn, R Whitelock and R Mill.   They won from Garscube Harriers in second and Bellahouston in 3 minutes 36.8 seconds.

The senior relays were again held at the Scottish Junior Track and Field Championships on 4th July 1953, but this time at Westerlands in Glasgow and both sprint and medley relays went to Victoria Park AAC.   In the 4 x 110 yards the team was M Wilson, R Whitelock, H Quinn and R Quinn and they defeated Heriot’s  AC and Shettleston Harriers in a time of 44 seconds dead.   In the Medley relay, JS Hamilton, R Whitelock, H Quinn and R Quinn defeated Bellahouston Harriers and Maryhill Harriers in a time of 3 minutes 33.9 seconds.

The medley relay was held for the third time at the SAAA Junior Championships in 1954 at Westerlands with Victoria Park determined to hold on to their two senior relay titles.   This they did with some style.   Read this from the Glasgow Herald:  “A feature of the meeting was the dual success of Victoria Park AAC in the 4 x 110 yards and medley relays.   They have thus won all five championship relays , a record which cannot be beaten and probably never be equalled.” 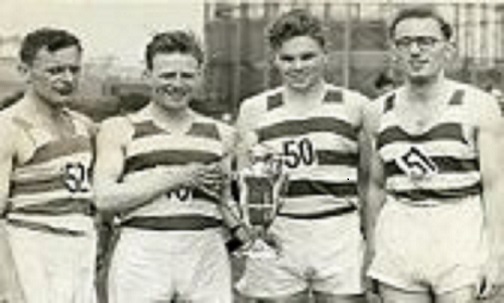 The events had been successfully held at the Junior Championships.   Well organised, on good tracks that were accessible – so they were moved to one of the biggest meetings in the country.   Glasgow Police Sports a Ibrox in 1955 were held a week earlier than usual and probably as a consequence, none of the University teams took part  because it was the date of the Universities Championships.   The winners of the medley were again  Victoria Park AAC whose team of D Henson, JV Hamilton, A Archibald and R Quinn recorded 3 minutes 32.5 seconds.   The club’s sprinters, needless to say – they were a class apart in the 1950’s –  took the 4 x 110 yards again.   This was the fourth time in succession that they had taken the medley title but their record in the shorter sprint relay was incredible – they first won it in 1951 and they won it every year from then until 1959, missed a year when Glasgow University won it, then went on to win again in 1961!   10 wins in 11 years.

June 9th, 1956 at the Glasgow Police Sports, held at Ibrox, was the date of another victory for a University team – between the wars the university teams from Edinburgh and Glasgow were key players in the event and were still a force to be reckoned with after the second war.   Their victory was largely due to the running of JV Paterson who ran the fastest half mile of his career.   Their time of 3:50.5 was not a record since CAR Dennis, who ran the last stage, was not a Scotsman; it could only be recorded as a championship best performance.  Victoria Park was second and Bellahouston Harriers third. 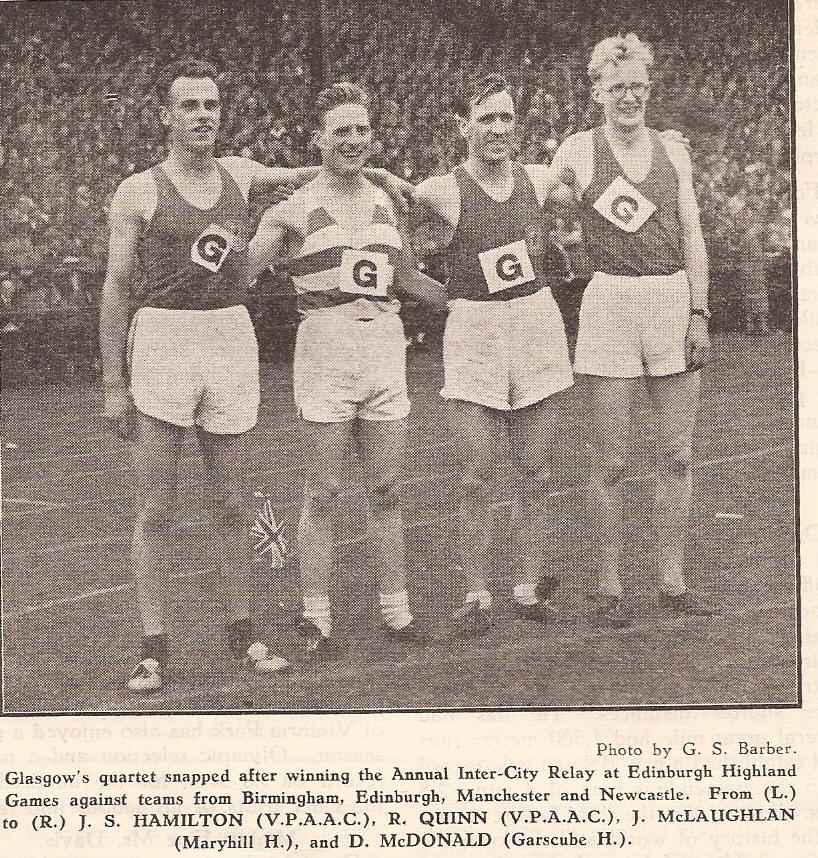 The 1957 Medley relay was held at the Glasgow Police Sports for the third time, again at Ibrox Park,  on 15th June.   Edinburgh University won the title from Bellahouston Harriers.   There was some controversy about the result which had been hinted at the year before:

“In winning the Scottish one mile medley relay championship Edinburgh University put up new record figures of 3 minutes 27.2 seconds.   The foundation of their success was laid by JV Paterson who returned the fast time of 1 min 52.4 sec for the half mile.    The students time will not be accepted as a national record for CAR Dennis is not Scottish.   Bellahouston Harriers whose team clocked 3 min 30,2 sec and beat Glasgow University’s previous best time of 3 min 31.7 will be the new record holders.”