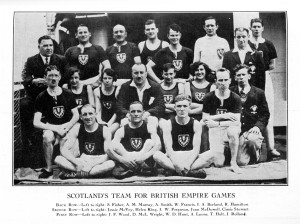 James Fraser Wood was born in West Calder in 1905 and, as a runner for Heriot’s AC he won championships on the track, represented Scotland internationally on track and country and also ran in the Empire Games. Games.

His track distances were 4 miles and 10 miles.    At 4 miles he never won a Scottish title but was third in the AAA’s championship in 1929 and 1930, and then in 1931 finished second just ahead of Anglo-Scot RR Sutherland of Birchfield Harriers.   Also of course a good three mile runner, he broke Johnny McGough’s Scottish record with 14:44.6 in Glasgow on 1st August 1931.   In 1930 he was part of a Scottish team that went to the Empire Games in Hamilton, Ontario, and finished fourth in the Six miles.    Scots generally did well at these Games with Dunky Wright winning the marathon and Wood, Robert Sutherland (three miles) and Roy Hamilton (220 yards) finishing fourth.    (Incidentally, the first ever European Championships were held that year in Turin but Britain did not send a team).

In general though, the further he went the better he got.   Wood. described by Keddie as “a diminutive ‘one paced’ runner”, won the SAAA Ten Miles title twice – in 1931 (54:15.0) and in 1932 (52:31.0)   The high point, however, was when he won the  AAA 10 Miles Championship on 22nd April 1932 with a time of 52:00.2, and en route set a Scottish record for Six Miles of 30:34.0 which was to stand for 20 years.   This was the last time that a Scot won the AAA’s ten miles.   The event was previewed in the ‘Glasgow Herald’ thus:   ‘There will be considerable interest this side of the Border in the AAA’s Ten Miles Championship at Perry Barr, Birmingham because of the fact that included in the field is JF Wood our own national distance champion.  Wood has had several experiences of running in English championships and always with distinction.  His chances of winning are not negligible but his task is a severe one, as JW Winfield, last year’s winner, T Evenson the international cross-country champion, JH Potts of Saltwell, and JS Holden of Tipton Harriers are in the field.   Win or lose, Wood will uphold the prestige of Scottish distance running.’

The report on the race itself was in the issue of 25th April when, under the heading ‘JF Wood Wins 10 Mile Championship’ the report read:   ‘The 10 Mile Championship which was held on Saturday at the Birchfield  Sports was won by JF Wood (Heriots FP AC), the Scottish cross-country champion.   Wood led thrughout with the exception of a few yards in the ninth mile.  His time was 52 min 0 1/5 sec.   The second place was taken by JA Burns (Elswick Harriers) who was  30 yards behind in  52 min 5 3/5 sec.   He wrested the lead from Wood twice between the eighth and ninth miles but could never hold it for many yards.  They were over 300 yards ahead of the third man, JT Holden ( Tipton Harriers).

There were fourteen starters, and Wood Burns and Holden, together with GW Bailey (Salford Harriers) quickly left the rest of the field but Bailey dropped out before the halfway stage.   The holder, JW Winfield Derby) was a non-starter. ‘    It can be seen from the report that it was not an easy victory over a poor field.

In the course of his relatively short track career he set records for Three Miles, Five Miles (25:12), Six Miles and Ten Miles.

Over the country, ‘Ginger’ Wood represented Scotland four times – in 1928, 1929, 1931 and 1932 – although Colin Shields says in ‘Whatever The Weather’ that he was ‘primarily a track runner’ although he did win the four vests.   He is first mentioned in the book as winning the East District Championship in 1927/28.    That season he was in the Scottish team for the international cross-country at Ayr where he was a counting runner in 21st place.   In the following year, Wood was one of those who failed to start in the National but he was nevertheless selected for the International.    The race was at Vincennes in France and he was 26th and again a scoring runner for the team which finished fifth of the ten countries participating.

In 1931, Wood was seventh in the National Championships which were won by Suttie Smith and again selected for the International.    Held in Ireland at the Baldoyle Racecourse in Dublin, Wood finished thirteenth.   His best run in the International however was in 1932.   The National was held on 7th March at Hamilton in an exciting race won by John Suttie Smith.     The following extract from Ggroe’s report in the ‘Daily Record’ said:   “Suttie’s commanding win – his fifth in succession – shows that the Dundonian has not only recovered his best form but even excelled himself by smashing the strong opposition including Robert Sutherland (Birchfield and Garscube Harriers) and JF Wood (Heriot’s) by 220 yards.   The race between Sutherland and Wood was most exciting and it was only on the post that the Anglo-Scot got the bulge on his rival. ”   The times were 54:16, 55:02 and 55:03.    Colin Shields describes the race as follows:“273 runners from 23 clubs lined up for the start.   James Wood (Heriot’sCCC) surprised his rivals with the fastest start ever seen in a National race, and the SAAA 10 miles champion led for the first three miles with Suttie  Smith and Henry McIntosh (Edinburgh Northern) closing the ga.   Suttie Smith went into the lead at 5 miles with Robert Sutherland chasing Wood who was an isolated second.   The Dundee runner strode away from his rivals for a 250 yard victory over Sutherland to record a fifth consecutive win.   The Army runner held off repeated challenges from Wood over the final 200 yards to take second place for the second successive year by the narrow margin of just one second.”

The international team was picked and all three were selected for  the team to go to Brussels.   Colin reports on the race: “Suttie Smith and James Wood were always up with the leaders  and, though tiring at the end of a fast run race finished seventh and eighth respectively.”    This was Wood’s last international with his highest ever finish in the event.