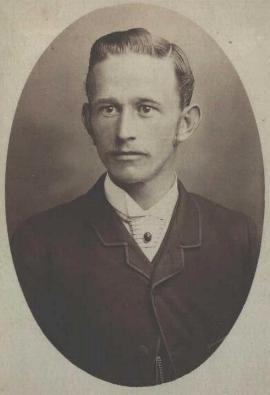 James Campbell won the Scottish Cross-Country Championship in 1887 – the second man to do so.

James Campbell came from Helensburgh and had the nickname ‘Teuch’, meaning tough.   Having run in the first ever Scottish Cross Country Championships in 1886 at Lanark Racecourse which was won by AP Findlay (also Clydesdale Harriers) he won the title himself in the second Championships in 1887 run from Hampden Park in Glasgow.    He already had a good record: in 1886 he had been second in the Clydesdale Harriers first ever club championships.   In the words of Colin Shields in the official history of cross country running in Scotland, ‘Whatever the Weather’, “Clydesdale Harriers held their first championships from the Ranfurly Hotel, Bridge of Weir through heavy snow with thick mist limiting their visibility to just 30 yards.   The course was seven miles in length – three miles less than originally intended and WM Thomson won the championships by just ten yards from James Campbell.”

The race for the second National Championships was held on 19th March 1887 and was held over 12 miles.   A grand football match between East and West was held during the race and the announcement that the half time and full time results of the international between England and Scotland would be announced helped to attract 600 paying spectators.   The race started in Hampden Park, which at that time was in the middle of the country, and went four times round the track, out of the stadium to the country over Mount Florida, past Hundred Acre Park into Castlemilk Estate, back through Rutherglen to the stadium, then one lap of the stadium completed the first of four laps.   The race was won by James Campbell in 1 hour 14 minutes 24 seconds from his club mate W Henderson.

James was a good club man too and worked on the Dunbartonshire Section Committee.   He lived at this time in Sinclair Street in Helensburgh which had almost all of the club’s members – 16 of the 20 in the Dunbartonshire Local Section lived there, the other four being from Dumbarton.   The speed with which the sport was spreading in all parts of the country was partly evidenced by the fact that in two years the section had grown to 62 members from the whole of the county.   By 1889/90 he was section captain.

His competitive record over the next few years was good.   In season 1887/88 his track record included 2 firsts and 2 thirds in a scanty programme.   In 1889/90, there were three first places and three seconds.

Clydesdale Harriers split from the Scottish Cross Country Association in 1889 over what it saw as discriminatory legislation and set up the Scottish Harriers Union in which its own sections competed against each other with virtually all of the best men in the country involved.   Before the split was healed, there were parallel Scottish Championships.   In 1890 Charles Pennycook won the SHU Championship from Andrew Hannah in February and then two weeks later the ‘official’ SCCA Championships were held and the race was reported thus by Colin Shields in his history of Cross Country Running in Scotland: “A fast start by the Clydesdale pair Andrew Hannah and James Campbell spread-eagled the field.   The Clydesdale runners together with A Robertson and D McKinlay (both Edinburgh) led at half distance, and it was with just two miles to go that Hannah raced clear of the leading group to win in 52 min 56 sec over 120 yards ahead of Robertson with 1887 champion James Campbell in third place.”

By 1891/92 he held no office on the Committee and his racing record was one first and four thirds. He did not return to the committee but his summer racing was as good as ever.   In 1892/93 he had three firsts, seven seconds and a third.   The club stopped printing the athletes’ racing successes that year in an effort to save printing costs but he appears in the club handbook as a club member until 1900 when the handbook ceased to print names and addresses of members.

James Campbell was a doctor by profession – a fairly stark contrast to his predecessor as national cross country champion AP Findlay who was a stone-mason to trade.   You can see from the portrait photographs that he was a professional man.   Nevertheless he was a hard, hard racer who lived up to his nickname, never being afraid to go with or even set the pace against opponents of all standards.