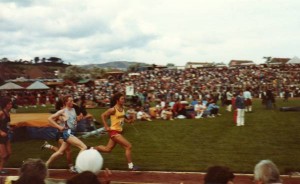 Alastair Douglas (in yellow) running before the crowds at Cowal

The Highland Games and various Gatherings around Scotland are a large part of the Scottish athletics tradition, including as they do all areas of athletics excellence. Almost all of the top athletes in the country have at one time or another taken part in such an event and in fact the Edinburgh Highland Games of the post-war years featured many of the very best athletes from around the world. Before the Commonwealth Games in 1970 and 1986 in Edinburgh, many of the foreign athletes had a go at some of the highland games before or after the Commonwealth Games. The difficulties that arose when the amateur era began in the 1880’s and the governing body would not countenance any amateur competing for money. This led to many an anomaly and many an injustice (see the profile of Robert Reid ). Menzies Campbell was asked to race Ricky Dunbar who was the top ped of the time when they were both in their prime but the authorities would not wear that one either. Not all Games were professional though, many altering to embrace the amateur codeand some like Strathallan have been professional, then amateur and are now basically open and offering good prize money. We are now in what is more or less a post-amateur athletics scene and it may be that eventually all athletics will be local but that’s a much bigger debate. As an introduction to the subject Shane Fenton has contributed the following piece as an introduction to the Highland Gatherings. The picture is of Graham Crawford racing in the 2 miles race at Blairgowrie. 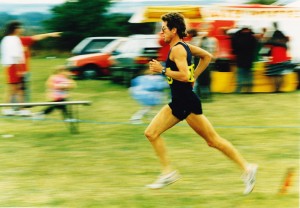 Games in the Highlands of Scotland

It is reported in numerous books and Highland games programs, that King Malcolm Canmore, in the 11th century, summoned contestants to a foot race to the summit of Craig Choinnich (overlooking Braemar). Some have seen in this alleged event the origin of today’s modern Highland games[2].

Following the repeal of the Act of Proscription, various Highland Societies, beginning in the 1780s, began to organize around attempts to retain or revive Highland traditions. It was these early efforts that eventually led to the Highland Games as we know them today.

This modern revival of the Highland games received an enormous boost with the visit of King George IV to Scotland in 1822, although events were held in the years just prior to that. In 1819, for example, the St. Fillans Society organized a full scale Highland games with piping, dancing, and athletics and the Northern Meeting Society’s Highland Games – the forerunner of The City of Inverness Highland Games – was first held in 1822.

In the 1840s, in Braemar, Games began as a fund raising effort by local artisans to support a “Friendly Society” and their charitable activities. Soon thereafter, Queen Victoria who, together with her consort Prince Albert, had made Balmoral Castle their special retreat, began to patronize the Games. The Queen first attended the Braemar Games in 1848 and the following year, they were moved to the grounds of the Castle itself. Later, in 1868, the first in a series of “Highland Memoirs” excerpted from Victoria’s Journals, would be published.

Together with the earlier 1822 event, Queen Victoria’s patronage of the Games constituted one of the most significant factors in the popularization of the Games and what some have called the Highlandification of Scotland.

Among better-known games in Scotland are the ones held at Braemar, Inverness, Cowal, Lonach, Ballater and Aboyne. The Aboyne games have been running since 1867 without a break apart from the two world wars.

In the latter part of the 19th century, the Highland games played a role in the development of the Olympic movement. As part of his efforts to organize the first games, Baron Pierre de Coubertin visited a number of athletic competitions in order to determine which sports should be included in the Olympic Games, to standardize rules, and to examine the technical aspects of running such a competition. Among the events he visited for this purpose were a Highland Games event organized in conjunction with the Paris Exhibition of 1889. That event, in addition to what we today would call track and field events, also contained wrestling, tug-of-war, cycling, as well as competition in piping and dancing.

In their original form many centuries ago, Highland games gatherings centered around athletic and sports competitions. Though other activities were always a part of the festivities, many today still consider that Highand athletics are what the games are all about – in short, that the athletics are the Games, and all the other activities are just entertainment. Regardless, it remains true today that the athletic competitions are at least an integral part of the events and one – the caber toss – has come to almost symbolize the Highland games.

Although quite a range of events can be a part of the Highland athletics competition, a few have become standard.

In the 19th century, the athletic competitions at Highland games events resembled more closely a track and field meet of modern times. Some of the games preserve this tradition by holding competitions is these events. This could include, in addition to standard track and field events, a tug-of-war, kilted mile run and other foot races, shinty (a game somewhat like field hockey and dating back to the 18th century or earlier), and the stone carry.

Many of the Heavy Events competitors in Scottish highland athletics are former high school and college track and field athletes who find the Scottish games are a good way to continue their competitive careers.