George Morrison Carstairs, was born in  Mussoorie, India on 18th June 1916 where his father the Reverend Doctor George Carstairs was a Church of Scotland missionary.   James Keddie in his excellent centenary history of the SAAA refers to him as Morris but many others use his first name of George while the gbrathletics website calls him Morrison ‘Jack’ Carstairs .   For the sake of convenience he will be referred to here as Carstairs!    He was educated at  George Watson’s College and Edinburgh University.  When he had completed his running career, Carstairs had a brilliant academic career in Medicine and Psychiatry and became Professor of Psychiatry at Edinburgh University from 1961 to 1973, Vice Chancellor of York University from 1974 to 1978, and between 1969 and 1971 was President of the World Federation for Mental Health.  He gave the Reith lectures in 1962 (accessible via youtube), and wrote many academic papers.
The SAAA standard distance up to 1934 was the Four Miles but in that year they changed it to the Three Miles and Carstairs was the outstanding Scottish runner at that distance until the War started in 1939.   He ran well in 1936 winning the Mile by 50 yards in 4:31,1 running for Atalanta against Aberdeen University.
On 15th May 1937 he started his season with a victory in the UAU Championships.   The ‘Glasgow Herald’ said: GM Carstairs, of Edinburgh University established one of five new records set at the Universities Athletic Union Championhips at White City, London, yesterday.   With a time of 14 min 36 4-5th sec, Carstairs was a comfortable winner in the three miles event, taking the lead at the end of the first mile-and-a-half and maintaining it right to the finish.”   Eleven days later at Craiglockhart in Edinburgh he won by three yards from his local rival Jack Laidlaw in 14:50.8.    Laidlaw, who had won the SAAA title himself in 1935 in 14:46.4,  had the upper hand next time they met, also in Edinburgh, on 8th July.   Carstairs time was 14:39.5 to Laidlaw’s 14:37.5.   Carstairs went on to win the SAAA title at the distance in in 14:35.6 and in the same year was second in the World University Games.   The Glasgow Herald reported on the SAAA race as follows:  “Indications that GM Carstairs would not be strong enough to stall off Laidlaw, Gifford and Farrell in the Three Miles proved quite groundless.   The Edinburgh student, who holds the titles and the records for British and Scottish Universities, set out – very wisely – to set a pace that proved beyond the powers of his rivals and he succeeded beyond expectations.
It was JE Farrell who showed most fight, but even he was tailed off three laps from the finish and Carstairs ran on without challenge to finish 150 yards in front of Farrell and only 2 8-10th secs outside Tom Blakely’s 1933 record.   Officials spurred him on round the last lap when it was seen the record was within his grasp, but the information was shouted at him rather late.   Carstairs’s improvement has certainly been an outstanding feature of the present athletic season.”
Selected for the Triangular International in Dublin that year he ran 14:29.8 on a grass track in heavy rain, a time that was 17 seconds inside the Irish record.   The photograph below shows him during the race. 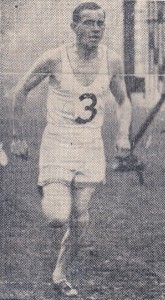