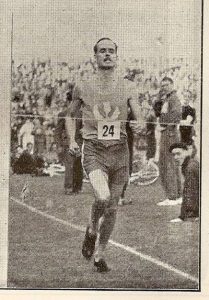 Dundee is famous for having two football teams but not many people know that there were once two very good athletic clubs in the city.   Dundee Hawkhill Harriers had a counterpart – Dundee Thistle Harriers was founded in the same year (1899).   ie only fourteen years after the first open athletics club in Scotland was established.   The club had a distinctive running vest  unlike any other in the country –  a white thistle centrally positioned on a blue vest.

Dundee Thistle Harriers was a very good club which graced Scottish athletics for sixty years.  Without access to the local press of the day the first signs of activity nationally are in the 1920’s and 30’s.  When we look at its record in the major championships this will become evident.

The District Relays were monopolised by Edinburgh Northern Harriers and Dundee Thistle between 1926 and 1936 with the Thistle winning in 1928, 1929 and 1936 and ENH having 9 victories.   These were not  easy victories however with ‘keen tussles’ between both clubs with Edinburgh Southern Harriers also in the mix.

Of course, the winter was not just cross-country: road races took place then and, from 1930, the biggest of these was the eight-stage Edinburgh to Glasgow Relay Race.   The Thistle team acquitted itself well and was second in the very first race.   The club record was a good one.

In the inaugural event in 1930, the club set three stage records, J Brannan on the second stage, JM Petrie on four and J Suttie Smith on six.   Only 53 seconds behind all conquering Plebeian Harriers it was a good show.   Not one of the above trio turned out in 1933, their next appearance, but the club was again second with JMS Melville setting a new stage record on eight.   There were two races in 1933 and the team was second to Plebeian again in the second running.   1934 was the first year in which the club won the race with a team of Slidders, Gowans, Murray, Adams (fastest stage time on four), McKechnie, Coburn, Simpkin and Hay.   Several of these names will be mentioned later in their own right but it should be noted that Slidders and Hay had run in all races so far.   In 1935 the ‘old order’ of Plebeian, Dundee Thistle and Edinburgh Northern sharing the spoils was disturbed when Garscube Harriers finished second to Edinburgh Northern with Plebeians third and Thistle fourth.   Fourth again in 1936 as West Coast clubs Bellahouston Harriers and Shettleston Harriers finished first and second with Plebeian third and Thistle again fourth.   Regrouping a bit in 1937 Thistle won the event for a second time with AT Whitecross fastest on stage four taking the club from third to first – a position which they held to the finish in Glasgow.   In 1938, they slumped a bit to third place although AM Donnett was fastest on the first stage.   1939 was the last race of the series before the War and the club could do no better than sixth that time out.   It had been a very good run of results in the nine years while local rivals Dundee Hawkhill had not yet contested it.   They were back in 1949 but finished eleventh and were to win no more medals in the race with their best position being seventh in 1952 and 1953.   City rivals Dundee Hawkhill Harriers first ran in the race in 1961 when they finished sixteenth, taking the award for the most meritorious unplaced performance. 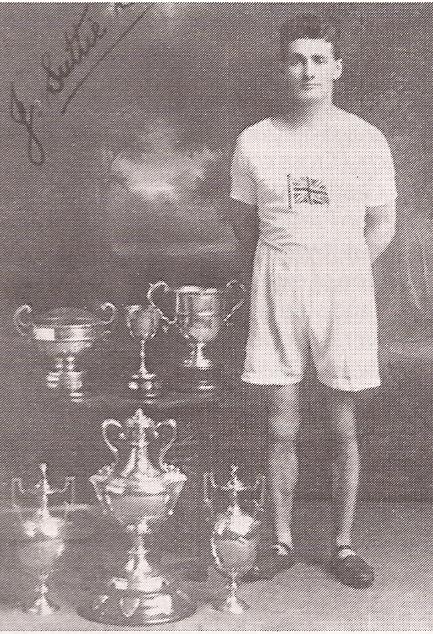 Between their inception in 1899 and the start of the War in 1939, Dundee Thistle Harriers had been one of the top teams in the land winning gold, silver and bronze in National and District Championships, in District relays and in the prestigious Edinburgh to Glasgow relay.    They could not have done this without some outstanding individuals among their ranks.

The club’s earliest internationalist in the Cross-Country International was JS Matthews in 1908 and the last man from the club to compete in the event was Charles Robertson in 1952.   As in the team races, their best years were undoubtedly the twenties and thirties, with four of their six Scottish representatives in the annual cross-country international coming from that period.   The six were

In the East District Championships,  the individual winners are noted below.

CD Robertson of course was a top class marathon runner and he won the District Championship for the second time in 1950.   That was the last year in which he won the championship.

The club was on a bit of a high when the War of 1939 – 45 started.   Most clubs struggled with problems of man-power, accommodation, finances, buying kit when all clothing was subject to strict rationing via clothing coupons, training in the blackout, etc.   In Dundee, we learn from the Hawkhill Harriers website that

“Dundee Hawkhill Harriers and Dundee Thistle Harriers were struggling to maintain member numbers, with so many heading off to the armed forces. In 1940, the Luftwaffe bombed the Thistle Harriers clubrooms in Abbotsford Street.
With both clubs struggling, they amalgamated into the “Dundee Harriers”, becoming the only functioning Harriers club in the East of Scotland during the war. During the war years, The Perth to Dundee Marathon, which had originally sprung to life in 1894 (James M Galloway winning the 21 mile 1540 yards race in 2:20:00), was resurrected by Harrier’s Captain, Jimmy Brannan. A few Perth to Dundee races were run around the turn of the century with a gap before six more events were staged in the early to mid 1930’s. Original winner Galloway’s sons, George and Alex won 5 between them! Again there was a gap until 1942, when Brannan resurrected the event in an attempt to erase Galloway’s 1894 record. At the end of the war, the clubs went their separate ways, apart from maintaining a joint committee from 1946 to organise the Perth to Dundee Marathon.   Dundee Hawkhill Harriers reconvened on Thursday 27 September 1945.”

The wartime activities were described as follows in an article on the Dundee Kingsway Relay in the November 1946 issue of the ‘Scots Athlete’ by DM Thomson:

“Seasons 1939-40 and 1940-41, you will doubtless recollect, were pretty drab and uninspiring events everywhere, but nowhere, I think, could they have been as dismal as Dundee.   Of the score or so clubs affiliated to the Eastern District Committee, NCCU, in 1937-38, all but Thistle and Hawkhill were, through force of circumstances, obliged to close down for the duration.   Rapidly depleting memberships, owing to the call-up, scarcity of recruits, and lack of competition resulted in a not unnatural waning of interest in the ranks.

During this period of depression Hitler & Co decided to eliminate Thistle’s Headquarters.   The obvious solution was followed.   Hawks and Thistle amalgamated for the duration, and proceded to operate from the former club’s premises under the name of ‘Dundee Harriers’.   “

On the question of training venues at the time, Colin Shields in “Whatever the Weather” gives us more information:   “Early in the War the clubrooms of Dundee Thistle were bombed during a sneak German bombing raid.   The destruction occurred on a club training night and runneres luckily escaped with scratches and shock.   The Thistle Harriers then shared the Hawkhill clubrooms and the two clubs amalgamated to form Dundee Harriers.   But the Hawkhill clubrooms were then requisitioned for use as National Fire Service sleeping quarters, and the club found itself homeless.   However they kept the sport going in Dundee by using football club rooms, cyclists’ huts and even tennis pavilions for training, and indeed managed to promote races which secured support from all over Scotland.”

The races promoted included the start-up of  the East District Cross-Country League, and old idea that had long disappeared from the fixture list, the Dundee Kingsway Relay, the ‘Round Dundee’ Relay and, after the war, the Perth – Dundee marathon was another joint project.    The League was credited with a very successful Dundee representation in the SCCA Championships during the war.   The SCCA was an ad hoc body appointed to look after the sport for the duration and they held an unofficial Scottish cross-country championship.   In 1941-42 it was won by A Haddow of RAF Leuchars with James Brannan, the ‘live wire’ Hawkhill man partly responsible for the re-start of the League, in sixth position.   The following year Jim Brannan won for Dundee Harriers and although the team was not quite as successful as the individuals, it was never out of the first four teams between 1942 and 1945.

The old rivalry came to the fore again after the cessation of hostilities withe each club running its own show.    The very first iussue of the ‘Scots Athlete’ in March 1946 carried the following:   “The war time union of Dundee Thistle and Dundee Hawkhill has dissolvesm each club now looks after its own affairs.   With the interest in Dundee, there is ample room for two clubs.   During the war Dundee has served the sport well and have done much to keep the sport in Scotland alive.”

A month or two later in the ‘Round The Clubhouses’ section of the ‘Scots Athlete’  was the following announcement:

“DUNDEE THISTLE HARRIERS have  a great tradition.   In pre-war days were one of the most powerful clubs in Scotland.   Intend to regain former strength.   Contact Hon Secretary C Donnet at 45 Commercial Street, Dundee.”

The cartoon below is self explanatory: in the first issue of the ‘Scots Athlete’ it was one of the last promotions of Dundee Harriers. 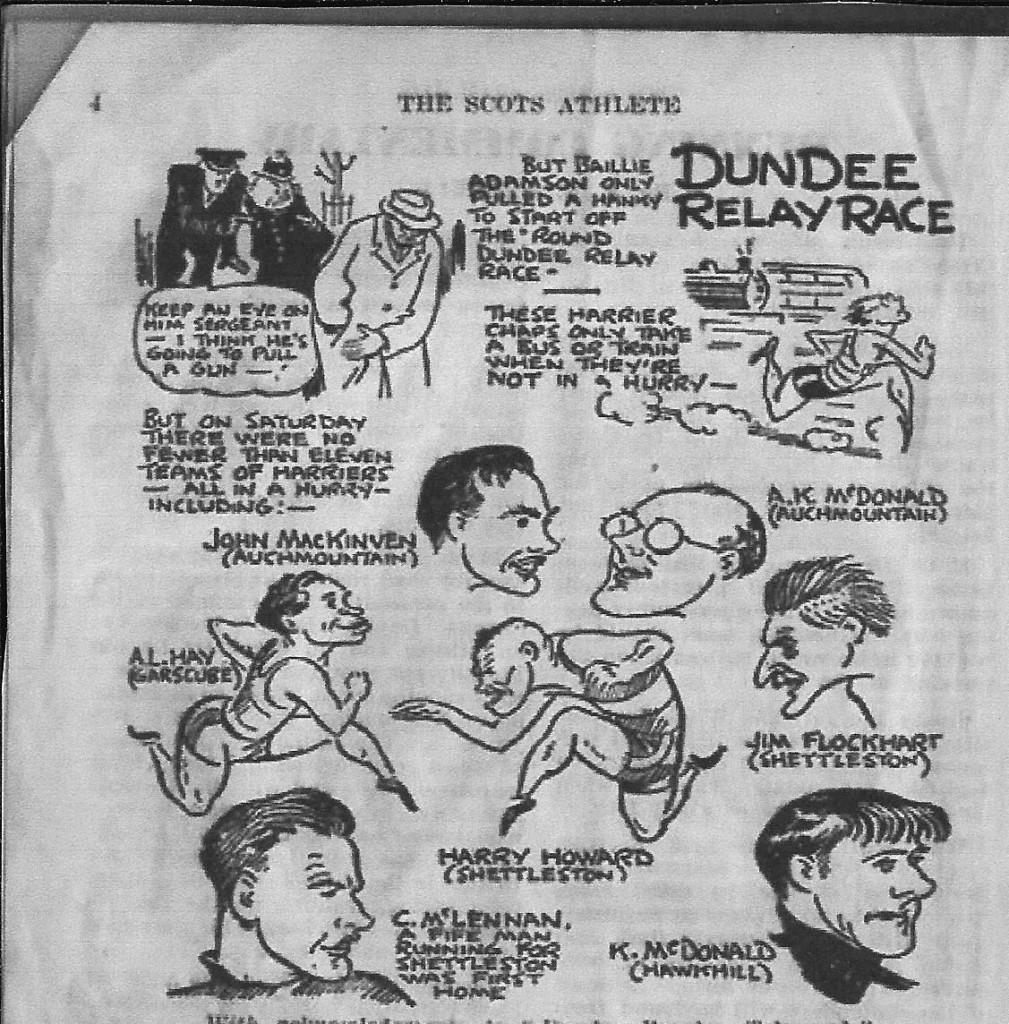 But the reality was that there were hard times for all athletic clubs after the war.   This was as true in Dundee as elsewhere but the club’s difficult times were perhaps disguised by the brilliant running of Charlie (sometimes Chick) Robertson.   Between the first post-war national in 1946/47 and their demise in 1959/60, the club did not finish a complete team at all in the premier national event.   In ’46/’47 there was an incomplete team the following year a Youths team was 12th out of 20 clubs and that was it.   Robertson ran in six nationals between 1947/48 and 1952/53 and there were a few Juniors and Youths running as individuals but that was it.  Dundee Hawkhill first appeared after the war in 1954/55 when a Youth team was ninth and their strength built up over the years – in 1956/57 the Youth team was seventh and the Junior team was twelfth.   Their first medal winners were theboys of the Youths team in 1959/60 who finished third.   The last appearance of a Thistle runner in trhe national was in 1958/59 when J Abbott was 52nd in the Youths race and J Fotheringham 51st in the Junior event.

In the District Championships, the results were slightly better but followed a smilar pattern.   In the first championship after the war, the club provided the individual (CD Robertson) and team winners.   There followed two years when no team in any age group was forward from the club.   The placings for the years from 1950 to 1957 inclusive were seventh, incomplete team, third, second, fourth, sixth, sixth and eighth.   There was no club representation after that.

Dundee Thistle Harriers had been a very good team right up until the war in 1939 but they never seemed to recover from it, the momentum was lost and the trajectory was downhill until 1960 when they were no more.    Hawkhill Harriers were to be the Dundee club to carry the city’s athletic hopes on into the twenty first century.