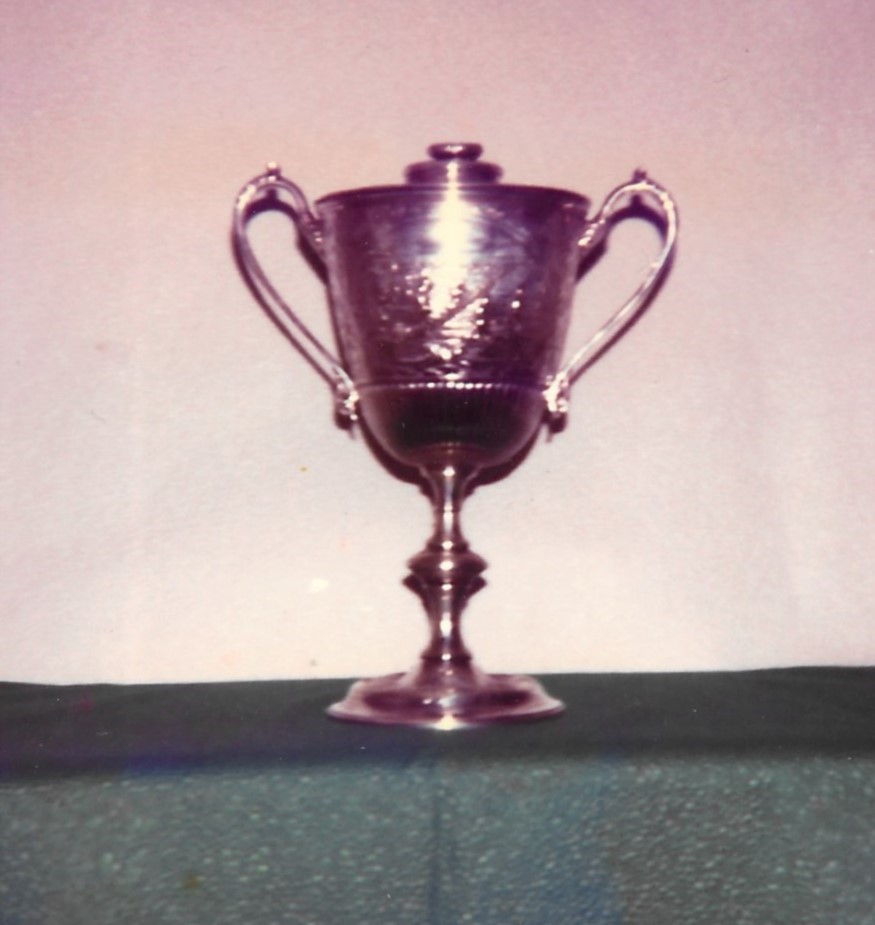 Clydesdale Harriers was established in May 1885 and through the years since it has acquired (accumulated?) a large number of trophies – Cups in the main, but also shields, statuettes and other awards.   The one I’d like to know more about is the marvellous Memorial Bowl  with its bas-relief depiction of a tiger hunt with elephants, jungle scenery and even tigers, the oldest is the club senior men cross-country championship cup first won by DW Mill in 1899; the most prolific donor was Jock Semple who has donated many cups to the club as well as to Scottish athletics generally.   One which was ‘lost’ was the Dalgrain Cup for the Youths (U17) Championship – identical to the Bastable Trophy awarded to the youth of the meeting at Strathallan Gathering, they were both won in the same year by Douglas MacDonald, David McAusland and Mark Govan.   Lots of trophies, lots of stories.   But for me the most fascinating is the Hannah Cup, donated by 5 times SCCU Champion and multi track title and record holder Andrew Hannah it has been awarded for a series of different events.

In 1903/04 the club handbook reported: “A cup, value £10, has been presented by Mr Andrew Hannah, to be competed for by Members of Clydesdale Harriers.   The Race will be run on the Track during the Cross-Country Season.   The Winner will also get a medal and hold the cup for one year.   The distance will be Three Miles.”   This was to be the Hannah Cup which has been competed for since – the latest valuation put it at approximately £6000.   He had offered to put the trophy, valued 10 guineas and there was some discussion as to how it would be awarded.   One suggestion, followed the following year was that it be awarded for a points competition over the club’s four open races.   The report on the first race was as follows:    “The Contest for the handsome Cup kindly put up by Andrew Hannah was a Three Miles Flat Race, decided at Meadowside, Partick and resulted in James Reston winning, with Saml. Stevenson close up and MF Dickson third”.

These three runners are worth commenting upon in their own right: James Reston was a Scottish International cross country runner who later emigrated to the United States and was the father of James “Scotty” Reston of the New York Times newspaper – a. internationally renowned reporter and journalist; Samuel Stevenson  went on to become an established Scottish athlete and champion and Olympic athlete and while Matthew Dickson was one of the longest serving of Clydesdale Harriers and SAAA administrators.   The race for the Trophy had its designation altered twice thereafter (in 1913 it was again altered to be for the first man home in the Western District Championship).

It is currently awarded for the fastest time in the club’s annual cross country handicap race.  This was as a result of a motion at the September 1927 Committee Meeting by T Kent seconded by J McNamara that it be awarded to the runner with the fastest time in the 7 miles handicap.  This has been the designation for almost of the trophy’s existence – ie the past 80 years.   This race is also one of interest – it is run as a ‘yacht handicap’.   ie the runners start in order of their handicap with the slowest starting first.   Just after Ian Donald joined the club from Shettleston and was back marker (off scratch) on a three lap train, the limit man, Jim Sweeney, came past the start at the end of the first lap just as Ian was about to start off.   “I passed him as if he was standing still!” was Jim’s boast for a long time afterwards.

Trophy winners below are up to the club centenary year of 1985.

It is a marvellous list which contains Scottish champions, Scottish record breakers and champions and medal winners at all levels but they were all good Clydesdale Harriers racing for a valuable trophy donated by one of Scotland’s finest ever distance runners.