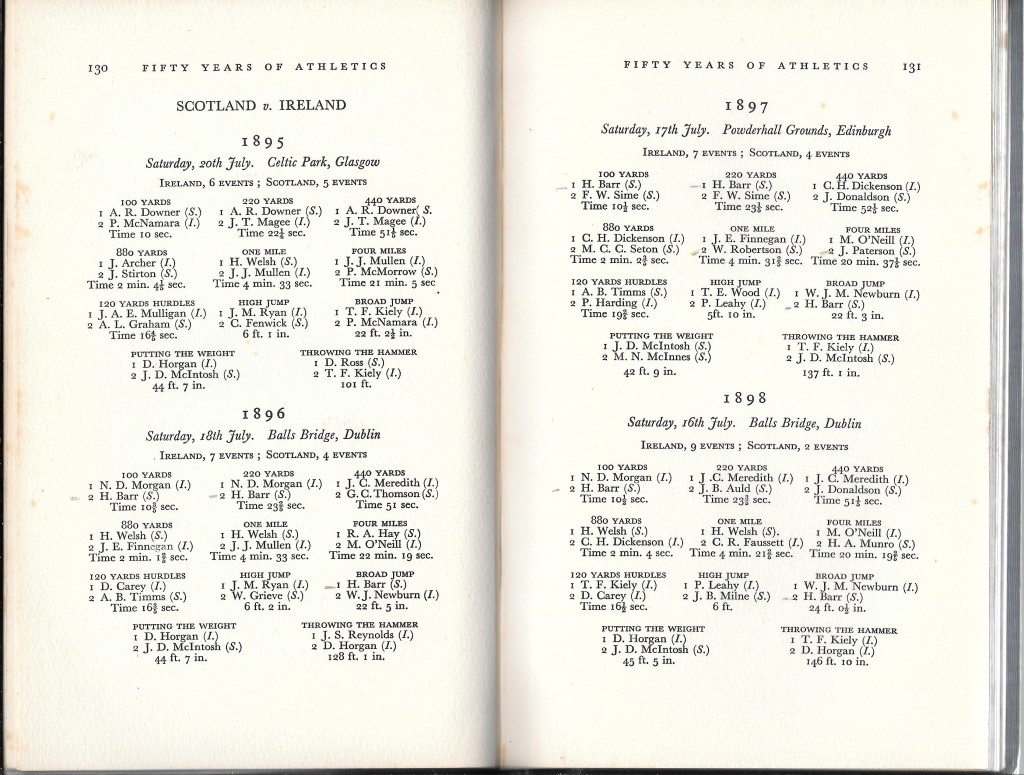 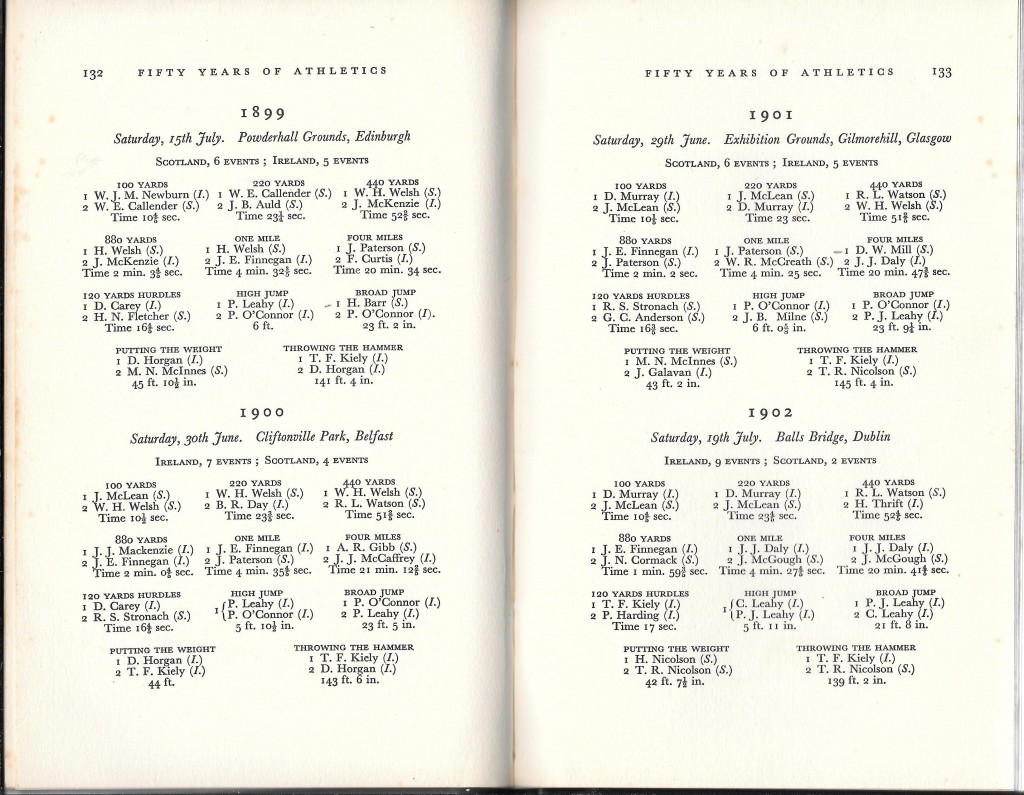 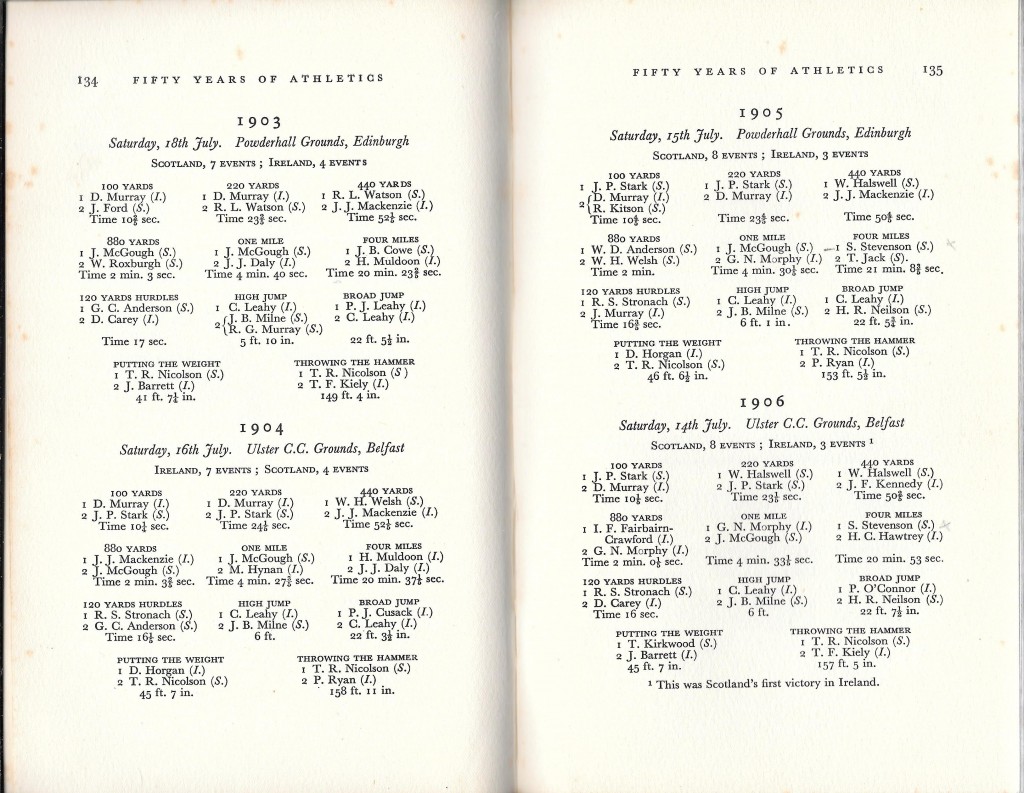 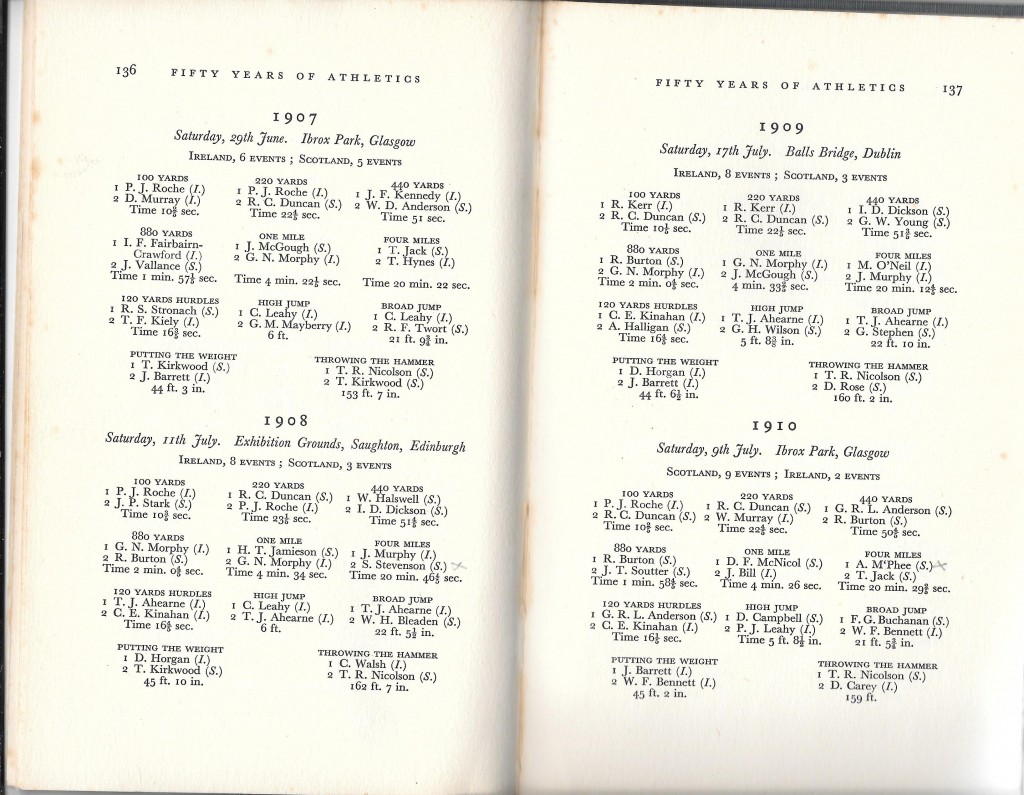 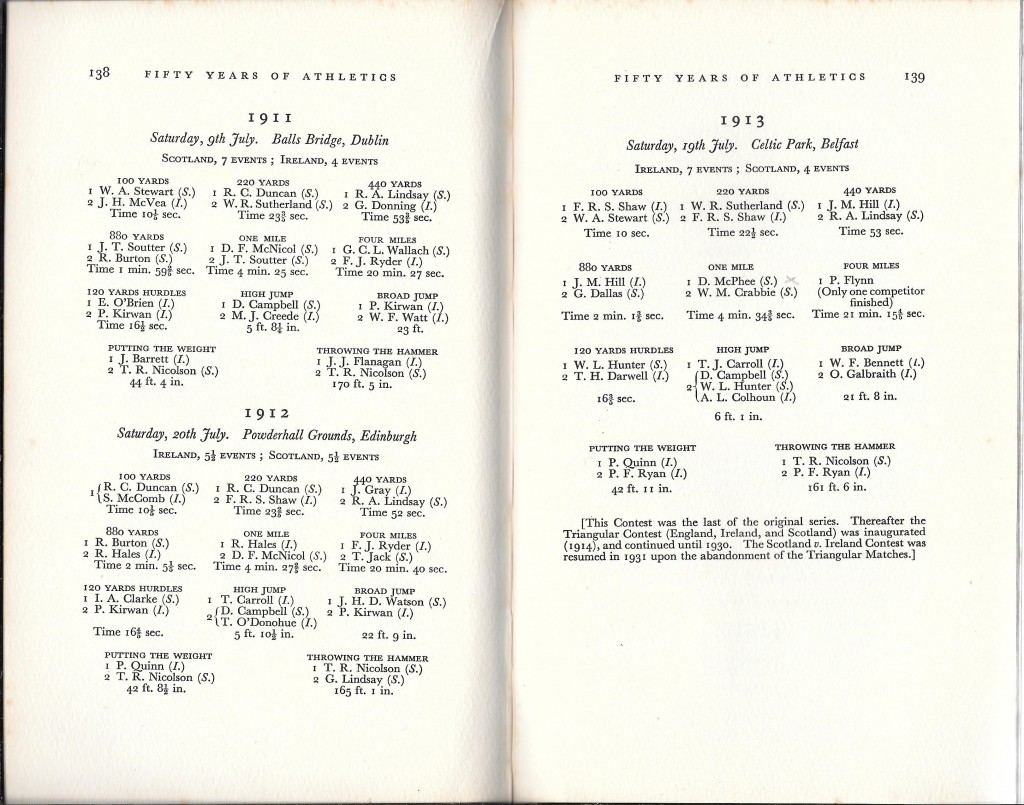 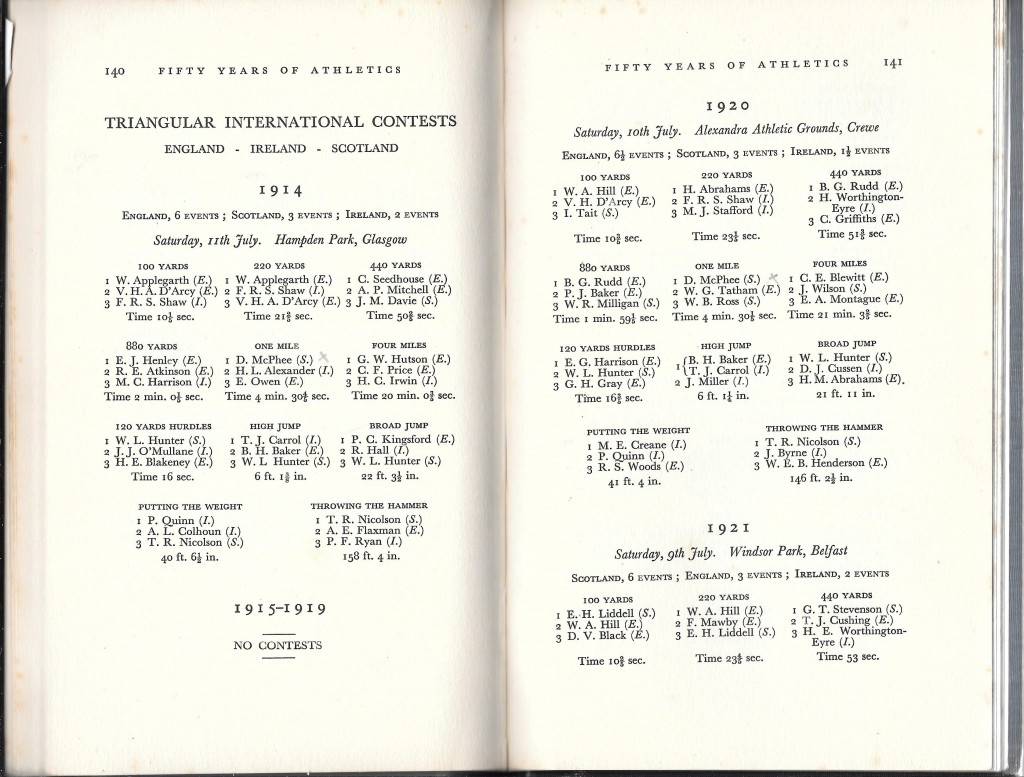 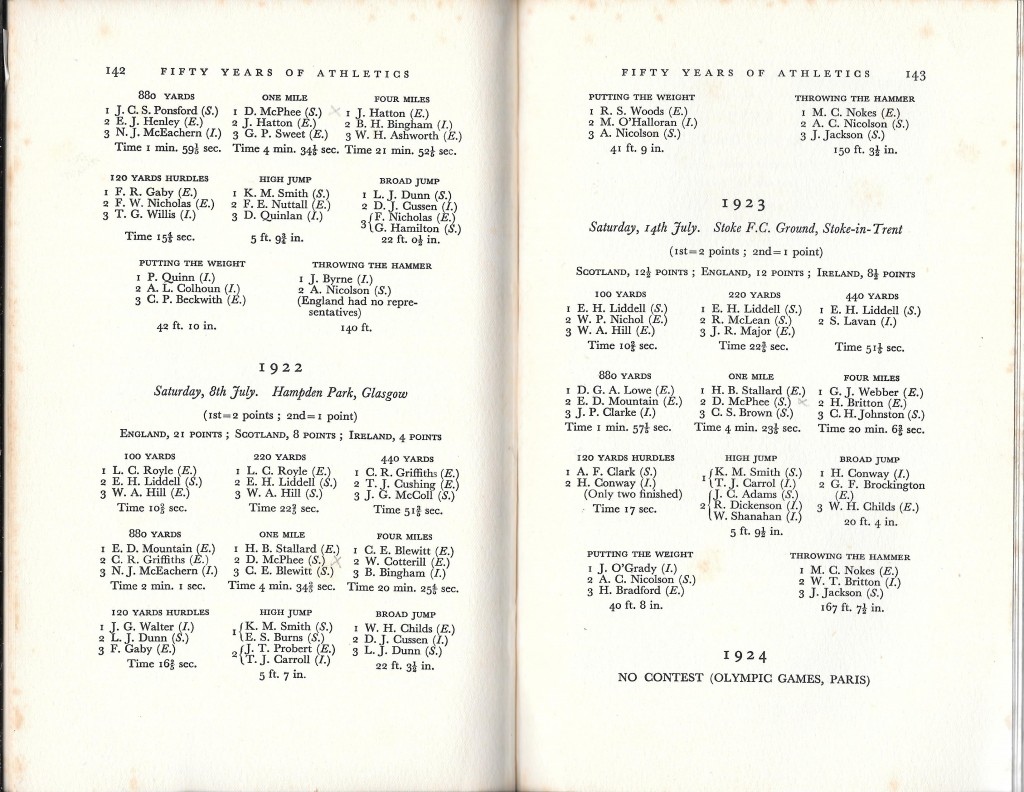 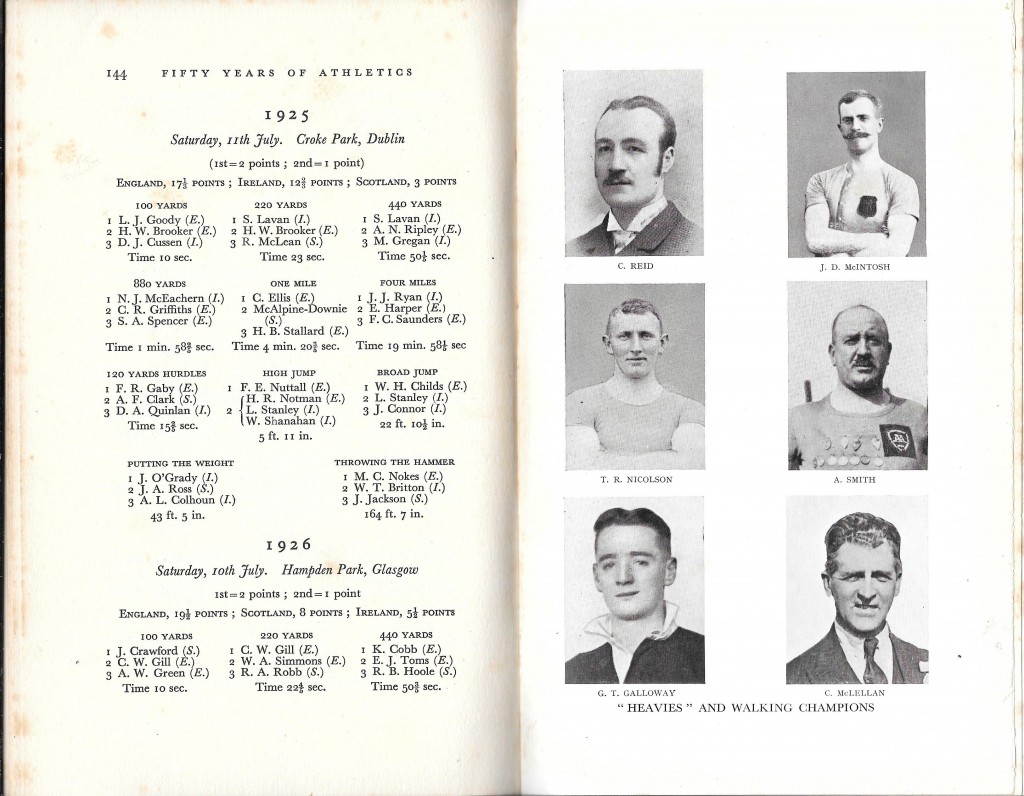 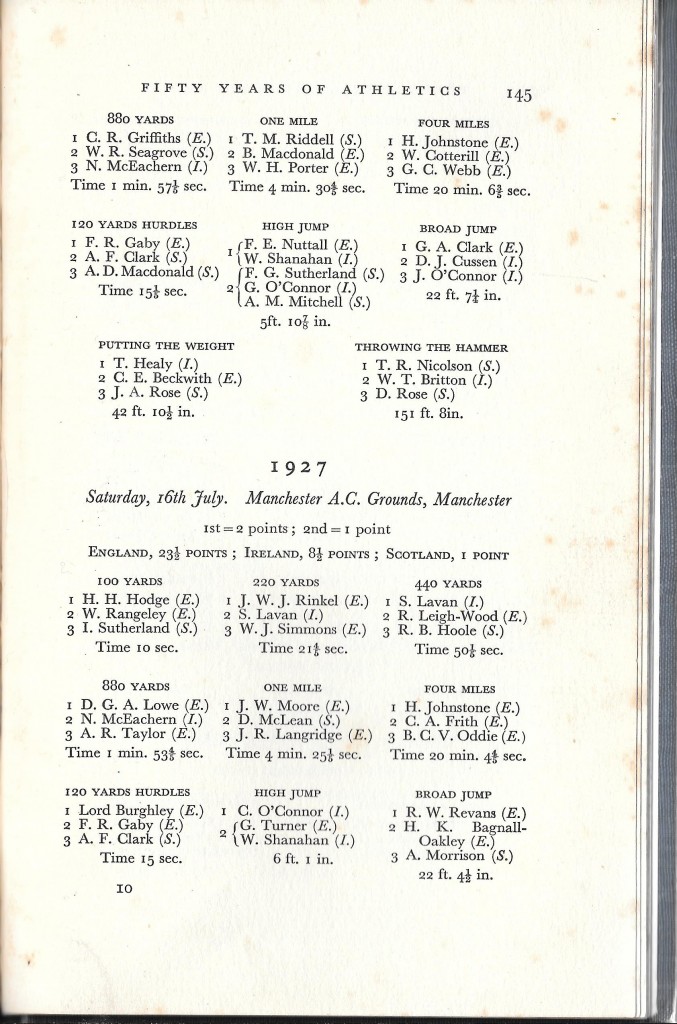 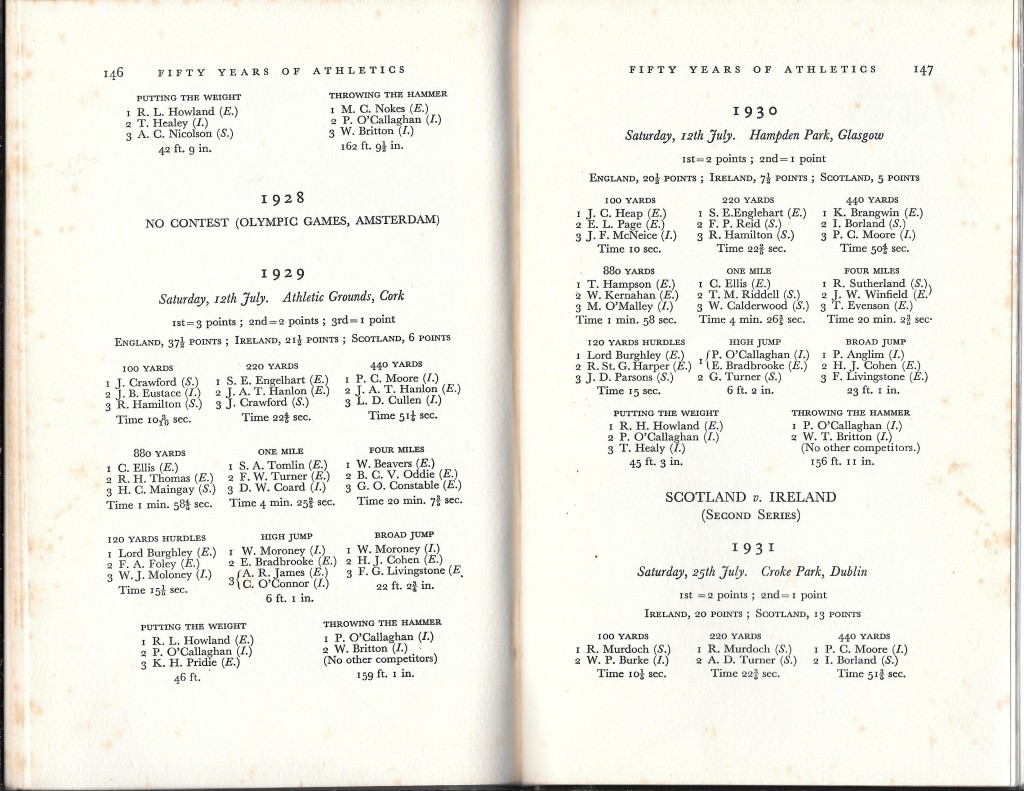 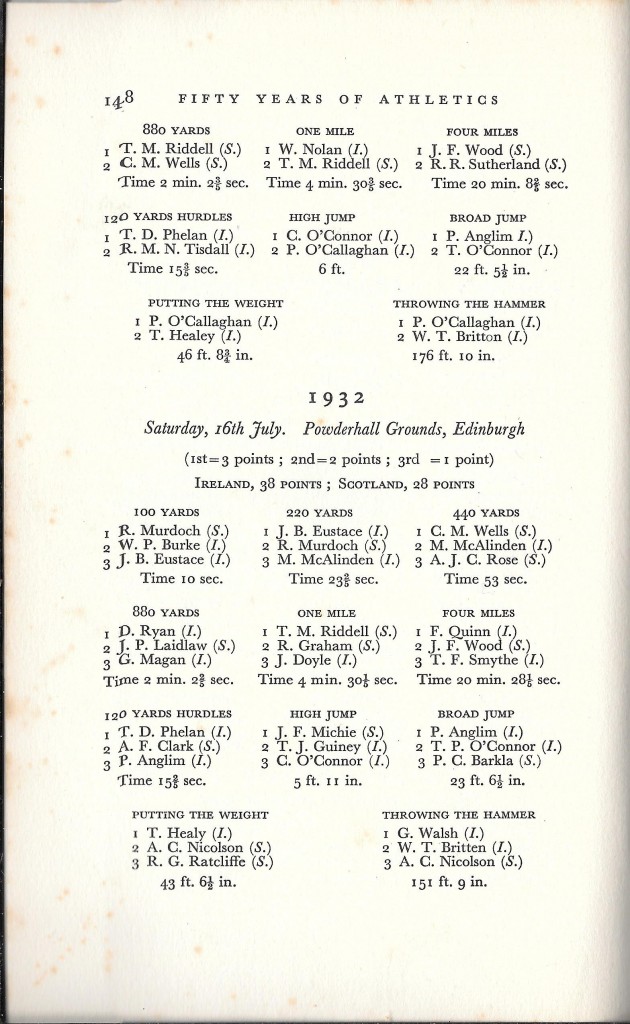 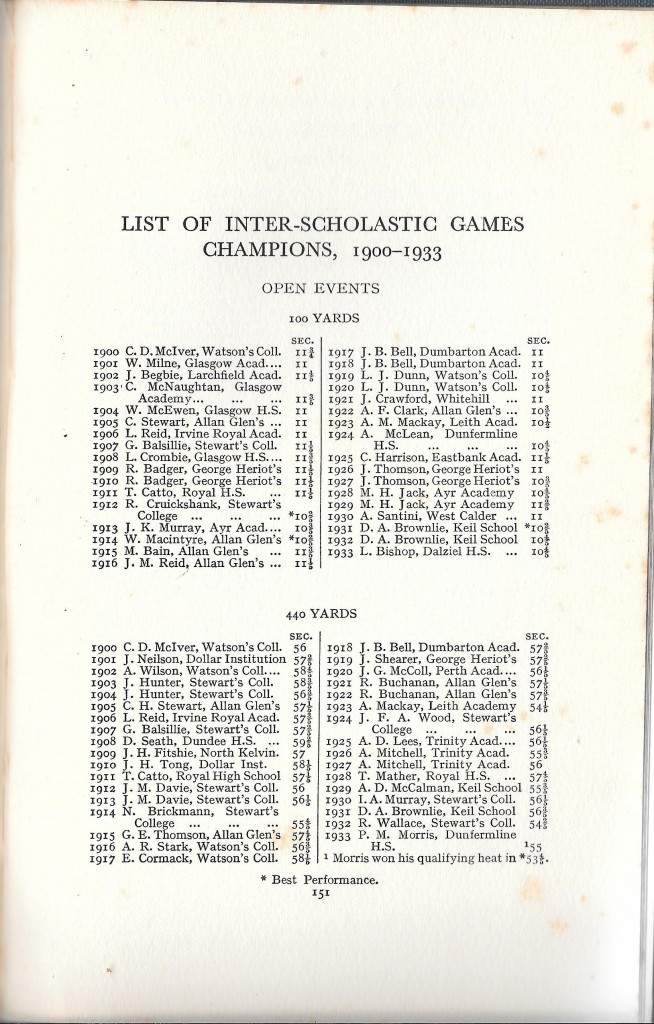 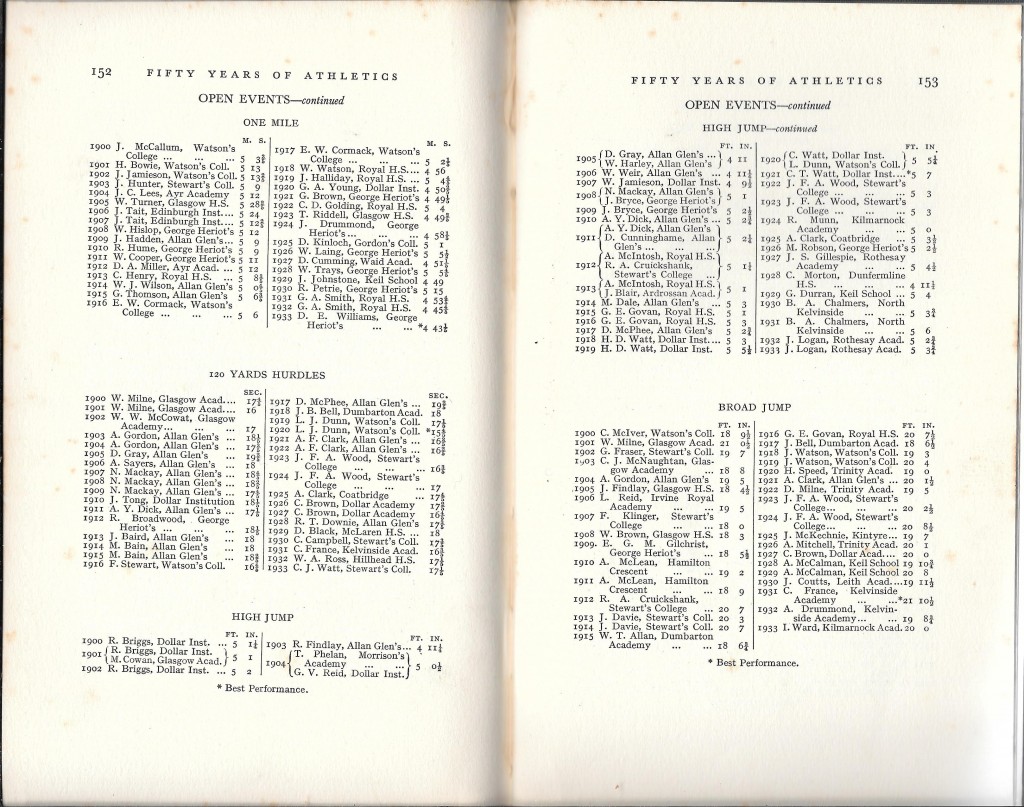 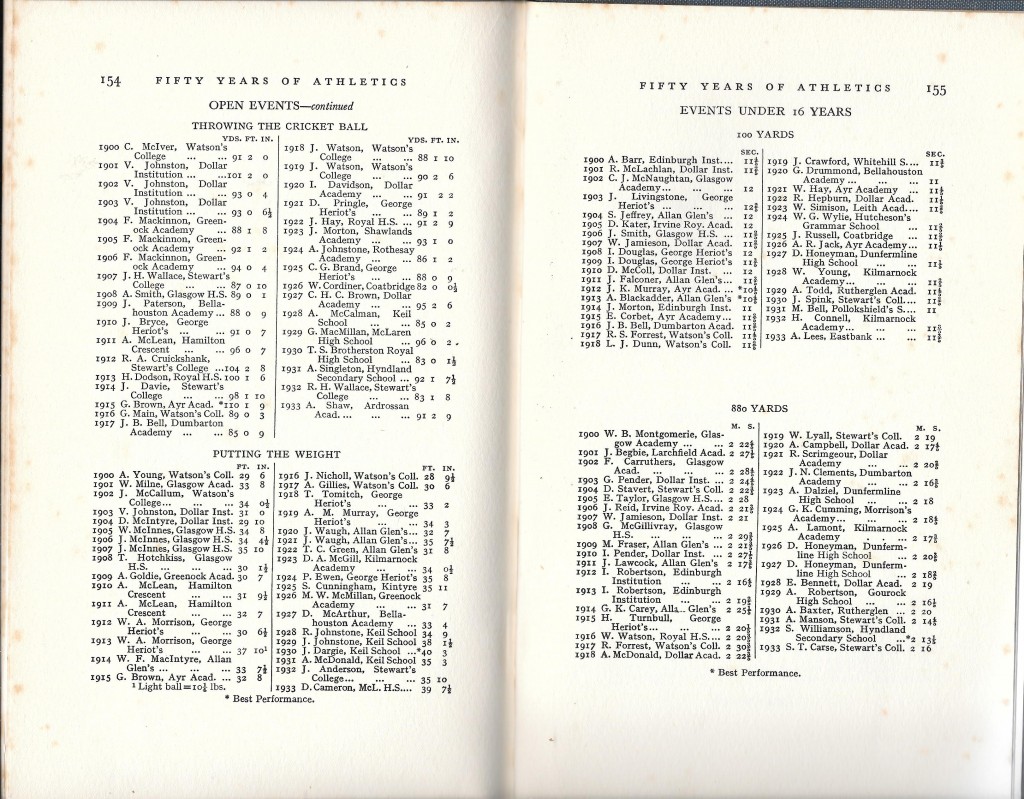 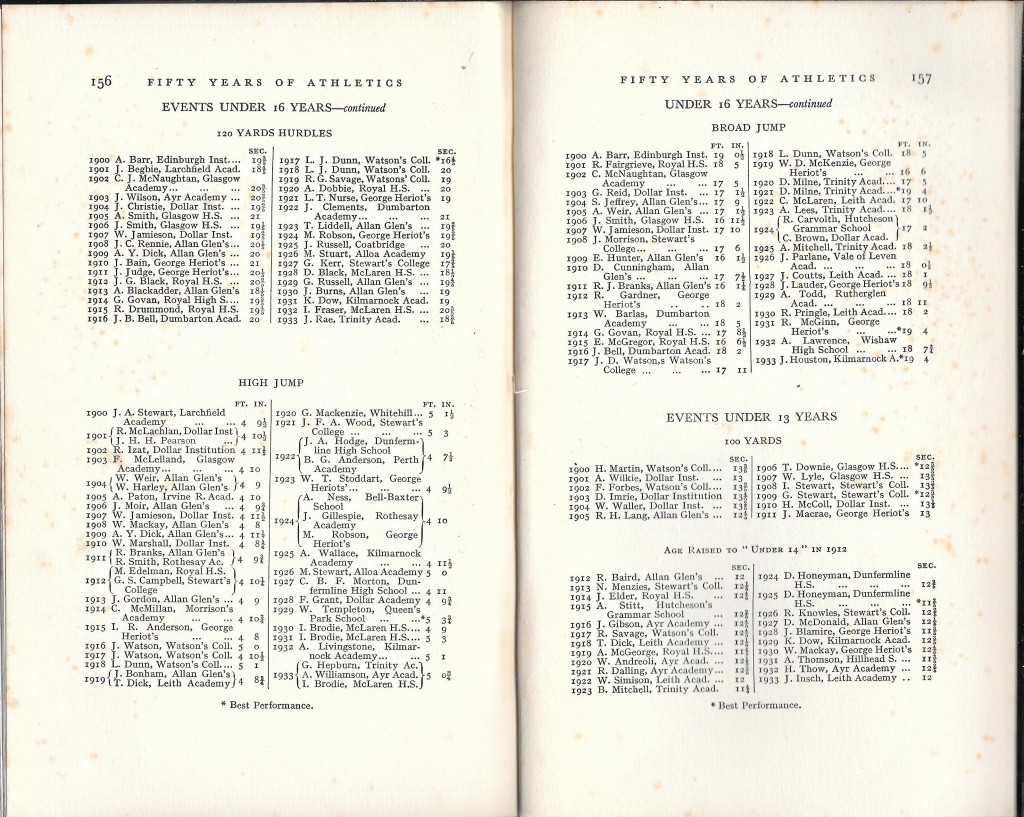 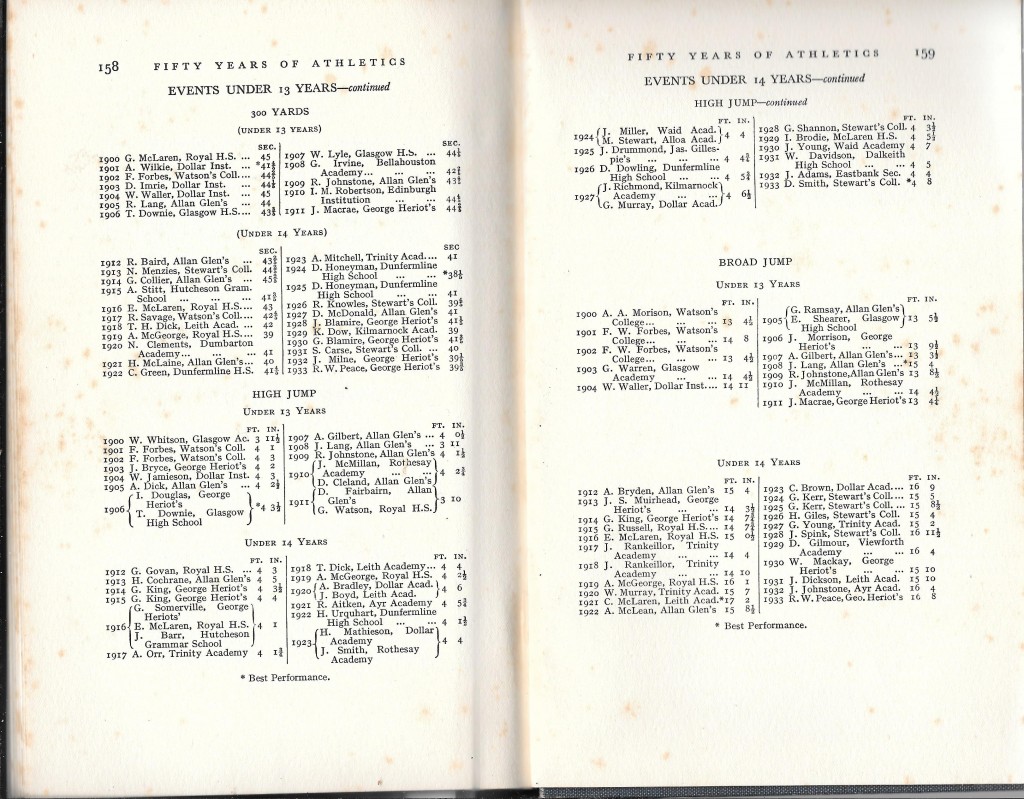 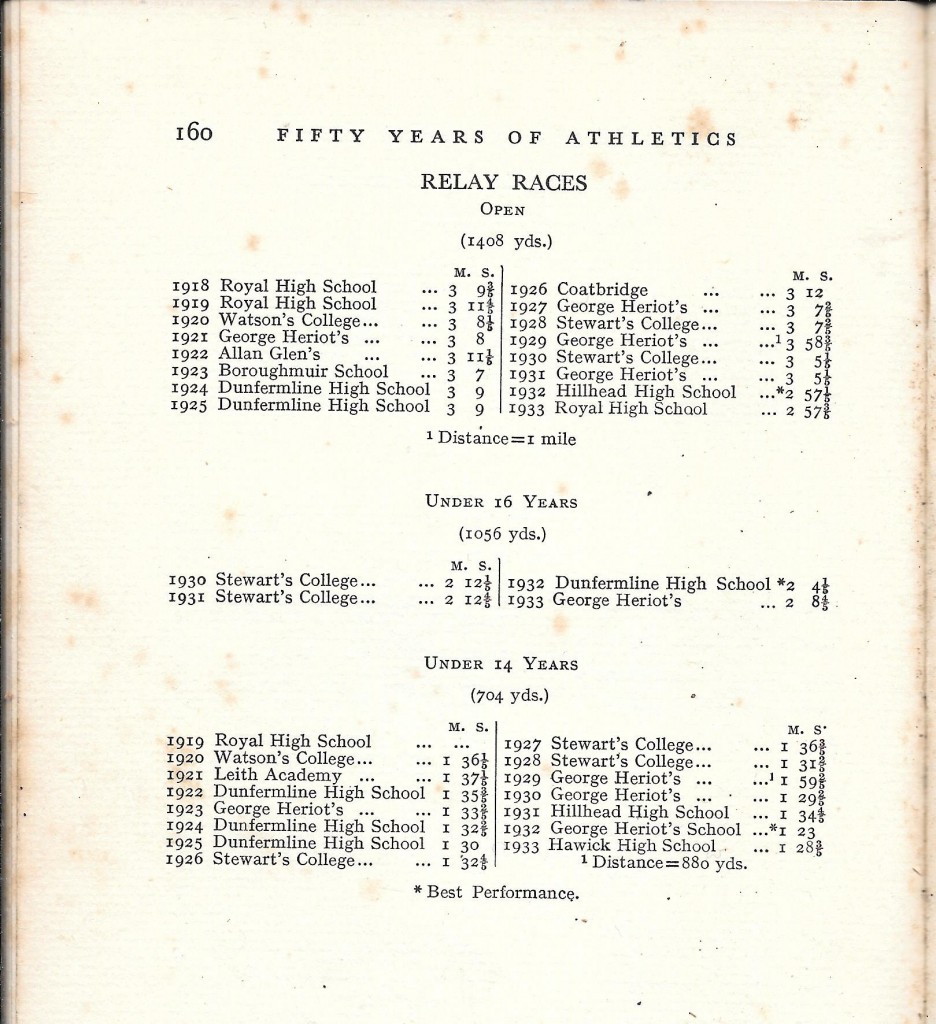 In July 1891 a special meeting of the General Committee of the Scottish AAA was convened to consider a proposal which had been received from the Irish AAA inviting a team of representative Scottish athletes to take part in a series of races against selected representatives of the Irish Association.   The distances suggested for competition were 100 yards, 440 yards and One Mile, and it was further suggested that this series of races should form the crowning feature of the Irish All-Round Championship Meeting which was to be held at Balls Bridge, Dublin, on 15th August of that year.   The proposed conditions of the contest were that the Irish Association should provide the prizes, whilst the Scottish body were to defray their own expenses.

In spite of its allurement, however, this invitation was declined by the Scottish AAA; but the potentialities of such a contest were perceived by the Scottish executive, and accordingly the Honorary Secretary was instructed top open negotiations for the institution of an international contest on a broader basis than the original suggestion – namely, to embrace all championship events.   The question of guarantees was also raised, and it was suggested that these should be given by each country in turn.   In this manner, then, was laid the foundations of an International athletic contest with Ireland, which was to continue without interruption for nearly twenty years.   But although the foundations were truly laid in 1891 through force of circumstances the edifice itself was not erected until four years later.

It was not until December of 1894 that overtures were again made by the IAAA to the SAAA with regard to instituting an annual athletic contest between the countries on the lines of the Oxford  v   Cambridge match, in which the odd event in eleven items was to decide the winner.

This  proposal was cordially accepted by the SAAA executive with the following suggestions:   (1) That the first contest be held in Scotland;   (2) That a guarantee be given to the visiting team to cover expenses;   (3) That the programme of events to be decided should be the Scottish championship events – the Ten Miles excepted; each country to have two representatives in each event, with three in the Four Miles race;  and (4) that in Scotland the Hammer to be thrown in the Scottish style and in Ireland under Irish rules.

In the main, agreement was reached on all these points, save that the guarantee condition was waived on a counter-proposal from the IAAA that there be an equal division of the net proceeds of the drawings.   The way was now cleared for both parties to implement these proposals, and thus on 20th July 1895 the first International contest with the Irish AAA took place at Celtic Park, Glasgow, which resulted in a win for Ireland.

Many famous Irish athletes were introduced to Scotland through the medium of the Scoto-Irish contest, and it may prove of interest to recall those whose charm endeared them to their Scottish friends.   Throughout the years of these international contests no Irish sprinter stands out with such clarity in one’s memory as Denis Murray, probably the most graceful sprinter who ever pulled on a running pump.    The second of a trio of famous brothers which included John – a good all-rounder, and pre-eminent in field events, and Willie also a first class sprinter – Denis Murray won the 100 yards race four years in succession for Ireland, in addition to winning the 220 yards in three successive years.    His was the perfection of style, and he ran his races without the least suggestion of stress or strain.

It is a remarkable circumstance that fifteen years were to elapse ere Scotland was able to register a win in the High Jump event; but when one remembers the names of the “leppers” who wore the shamrock emblem during the years 1895-99 one’s feelings of disappointment give way to a mood of resignation.   Here is the list: JM Ryan, PJ and Con Leahy, P O’Connor and TJ Ahearne.   Truly these men rose literally to heights unattainable by the Scottish representatives – good jumpers though they were.

Similarly in the Broad Jump event, it was only the sterling performances of Hugh Barr (Scotland) which broke the monopoly of Irish victories on two occasions over a period of fifteen years.   One recalls with keen appreciation how Bar, with practically his last effort in the Broad Jump event, on the occasion of the fifth contest of the series at Powderhall Grounds, Edinburgh in July 1899, created a new Scottish native record, incidentally winning the event and the contest for his country.   It was in the fourth match of the series that WJM Newburn – a veritable giant of an athlete – created a world’s record of 24 feet 1 1/2 inches in the Broad Jump.   A remarkable feat also falls to be related in connection with a high jump performance by P O’Connor on the occasion of an International at the Exhibition Grounds, Gilmorehill, Glasgow.   The judges were so impressed with the prodigioud bound taken by O’Connor when clearing the height of 6 feet 6 5/8th inches that measurements were taken from his take-off to his landing spot and the distance was found to be 17 feet.   This was not only high jumping – it was literally a steeplechase performance!

Memory quickens also at the names of Denis Horgan, Tim Kiely, JJ Flanagan and J Barrett in the field events.   A great personality was Denis Horgan, who toyed with the putting ball in the most leisurely manner conceivable.   He, to the huge amusement of the spectators, often sought inspiration from a black bottle – carefully enwrapped with accompanying tumbler in the folds of his jacket – invariably placed at a convenient distance from the putting-circle.   This egg and brandy flip – for such it was – formed a most important item in the genial Irishman’s field equipment.

And what of the duels between Tom Nicolson, TF Kiely and P Ryan in the Hammer event!   How these great exponents used to hurl their implements through space until it seemed as if the confines of the ground itself would surely be exceeded in some of their mighty efforts.

Athletic horizons were extending however, and with the inauguration of the Triangular Contest between England, Ireland and Scotland, the Ireland  v  Scotland contests came to an end In July, 1913 at Belfast, when Ireland finished as she had begun by winning the match by 7 events to 4.

On 11th July 1914 was decided the first of the Triangular Series at Hampden Park, Glasgow.   England signalised her entry into this competition by a win, the scores reading:   England 6 pts;   Scotland   3 pts;   Ireland   2 pts.   Then followed the blight of was, and to the generations of that day athletic Internationals and such like distractions passed into the limbo of forgotten things. 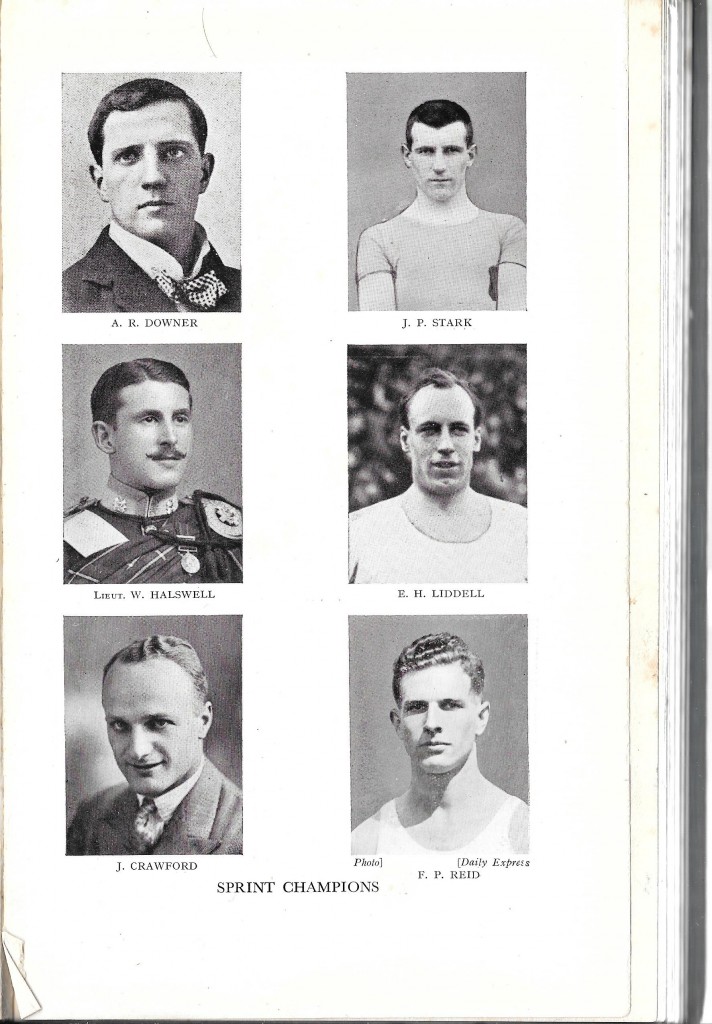 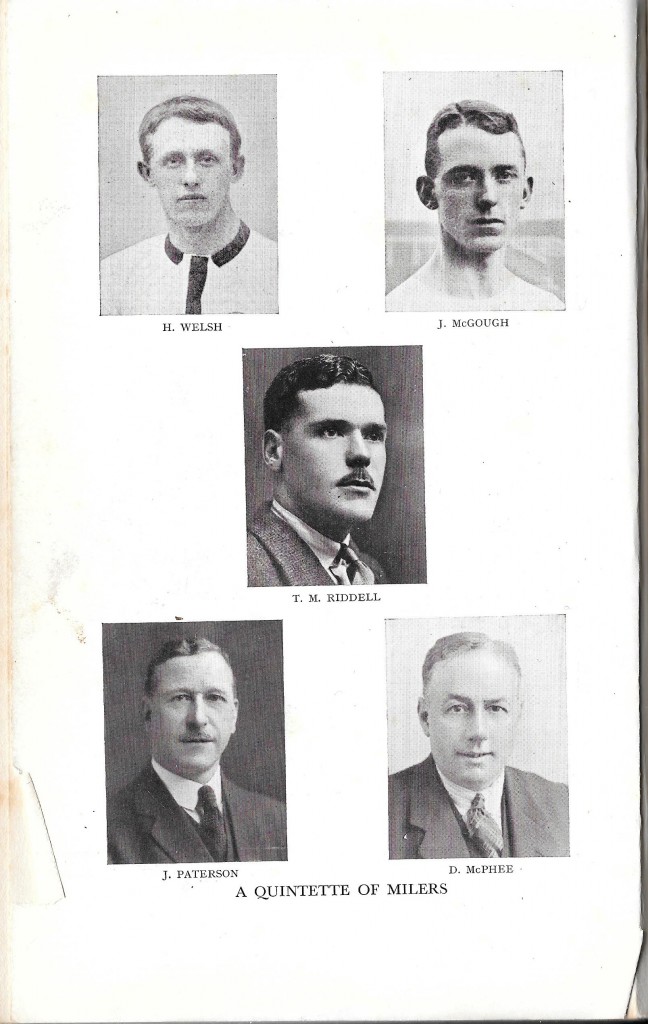 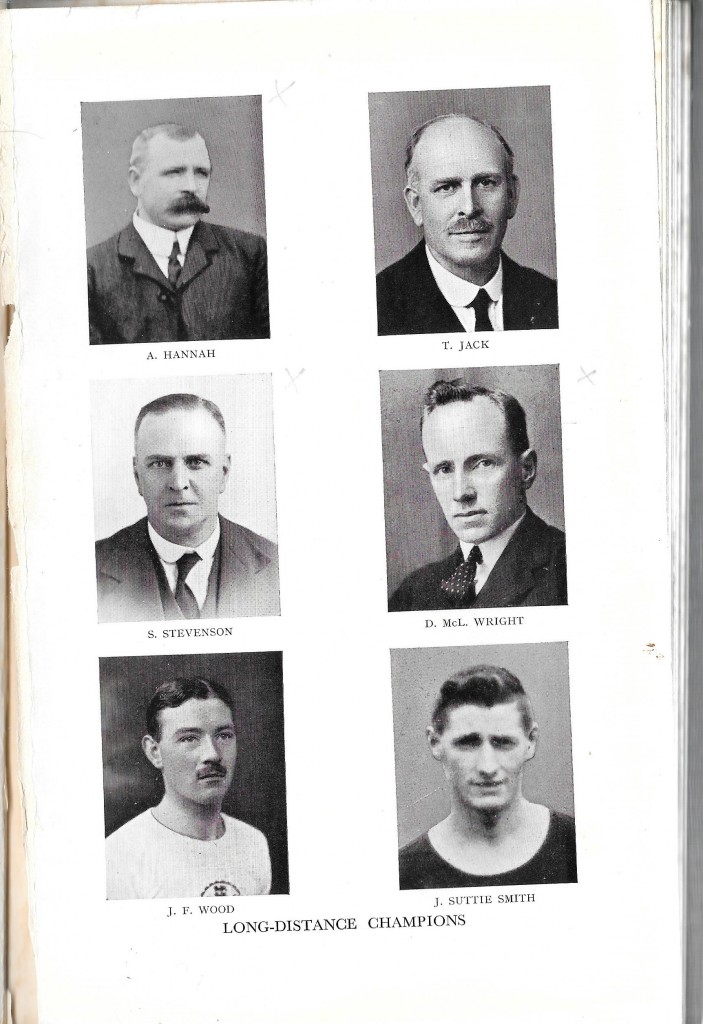 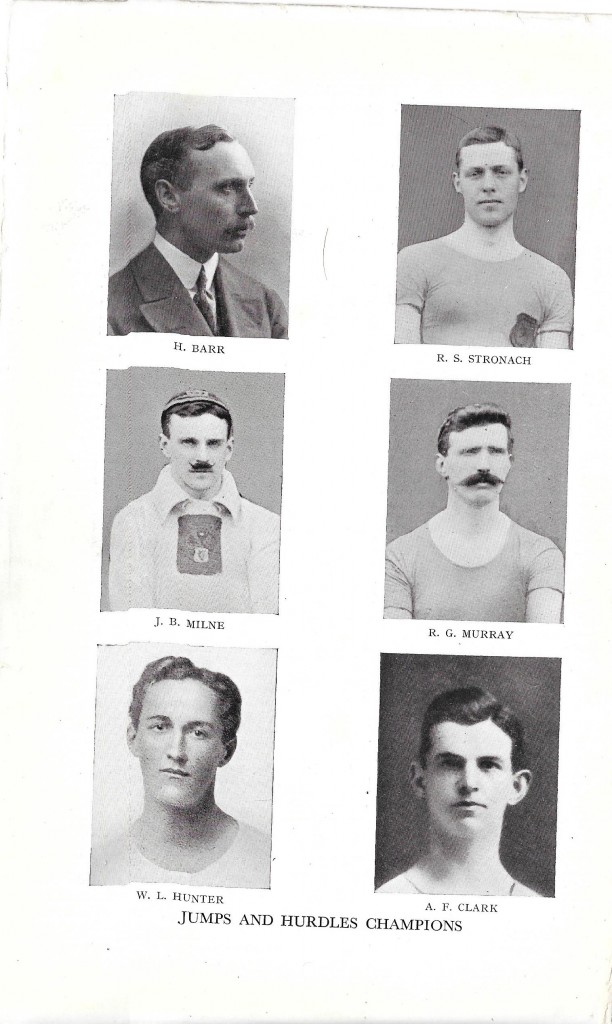 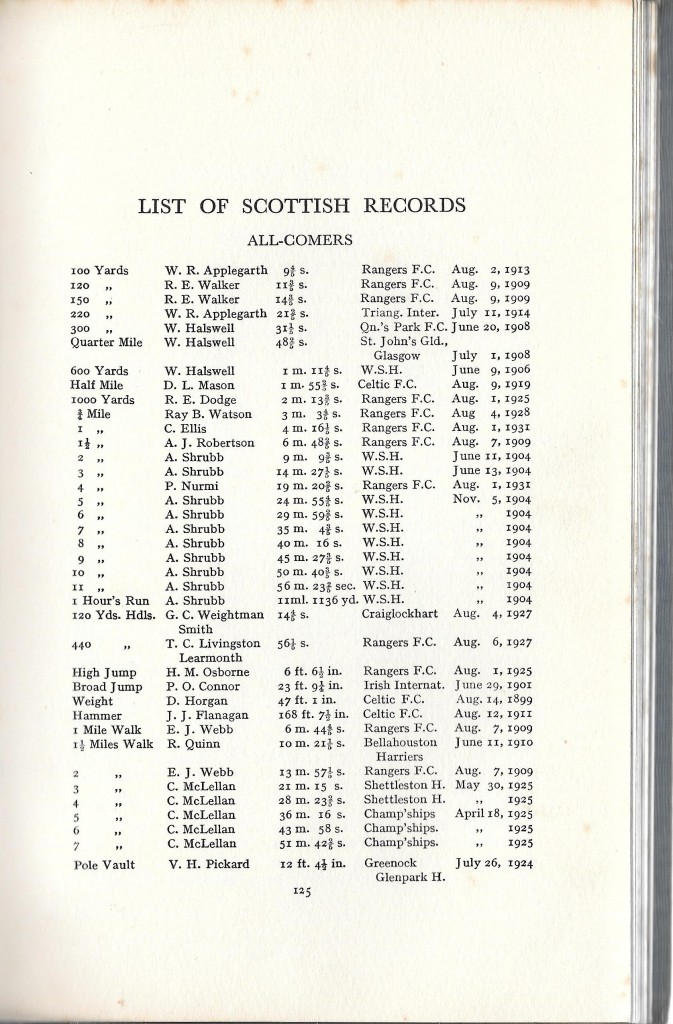 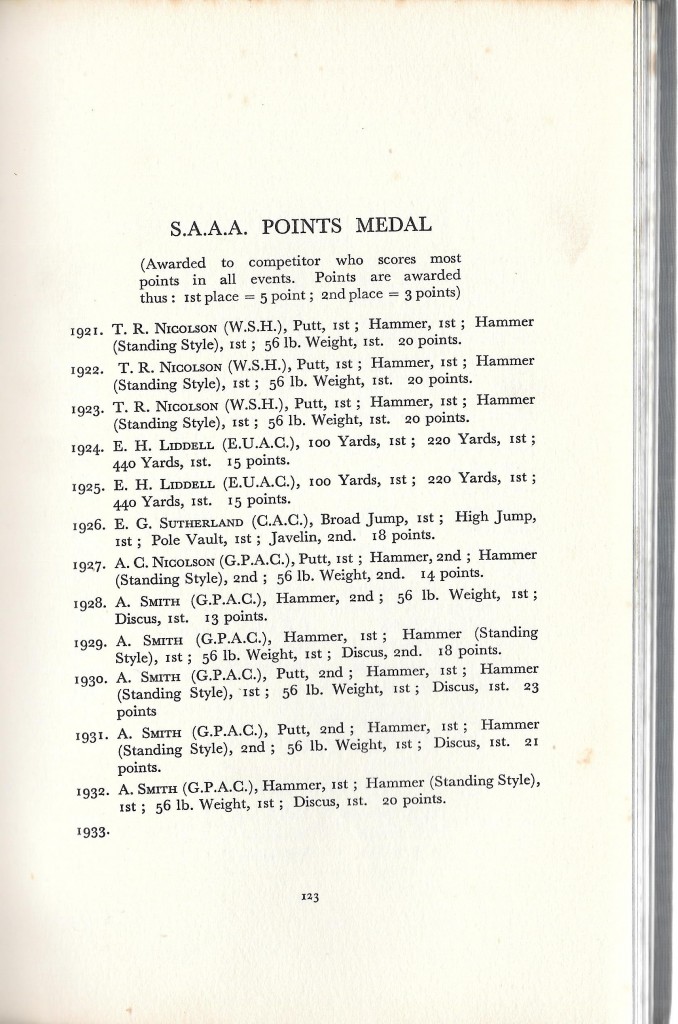 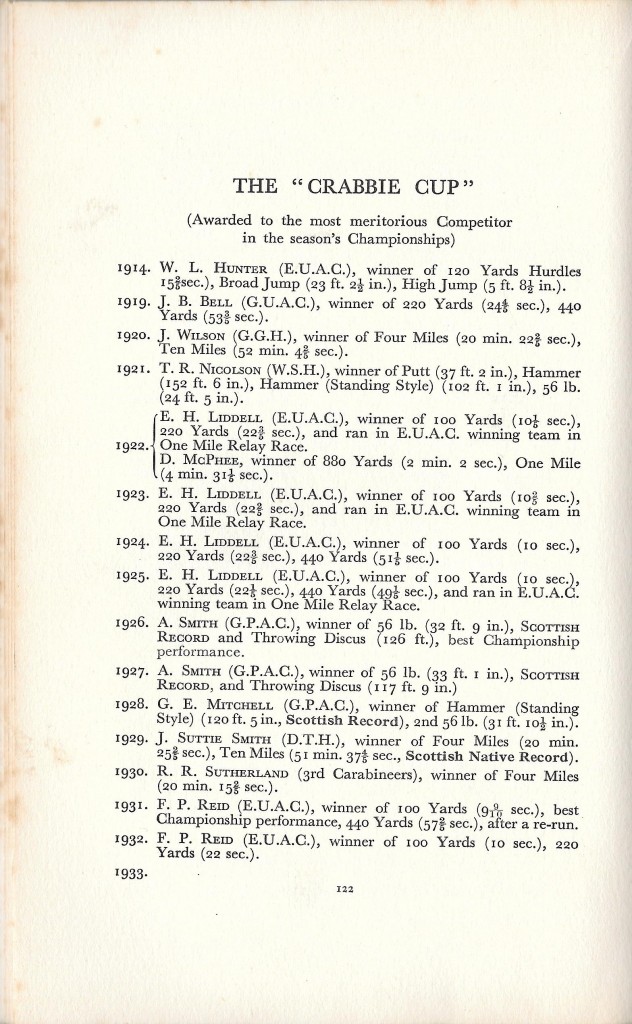 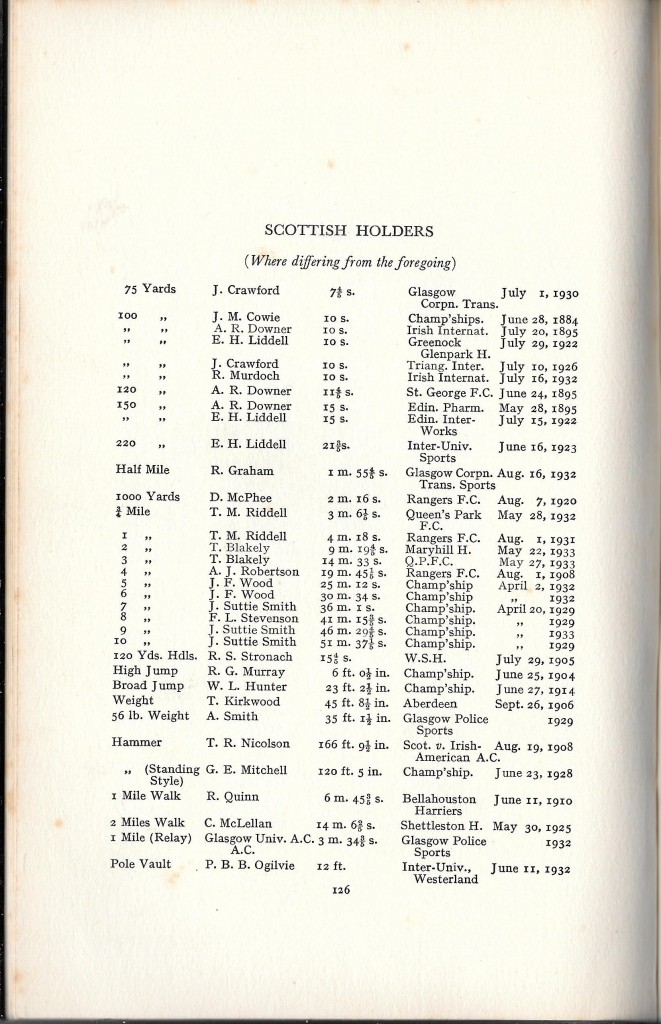 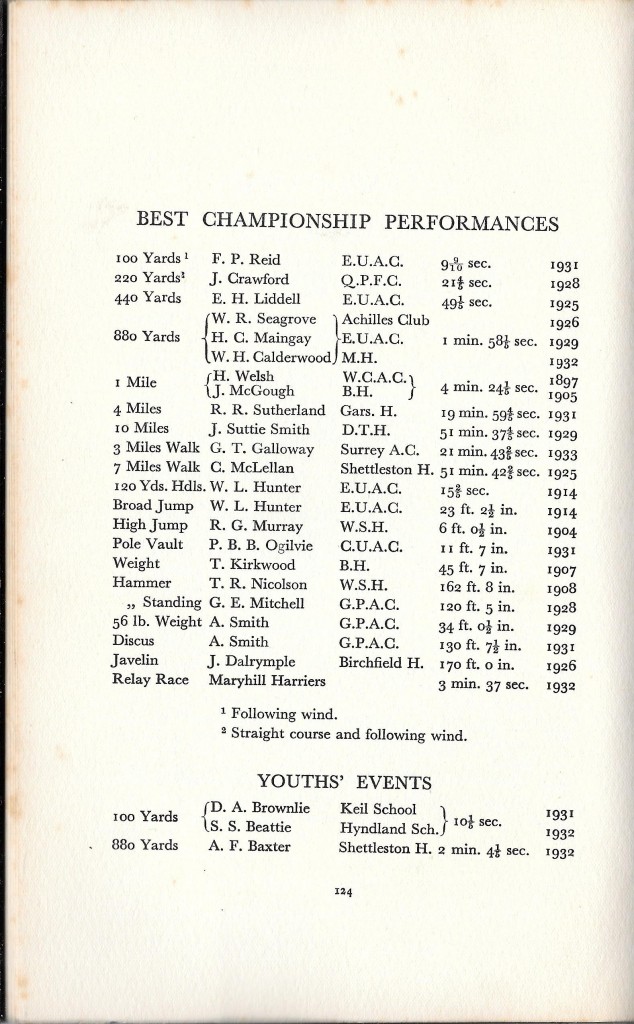 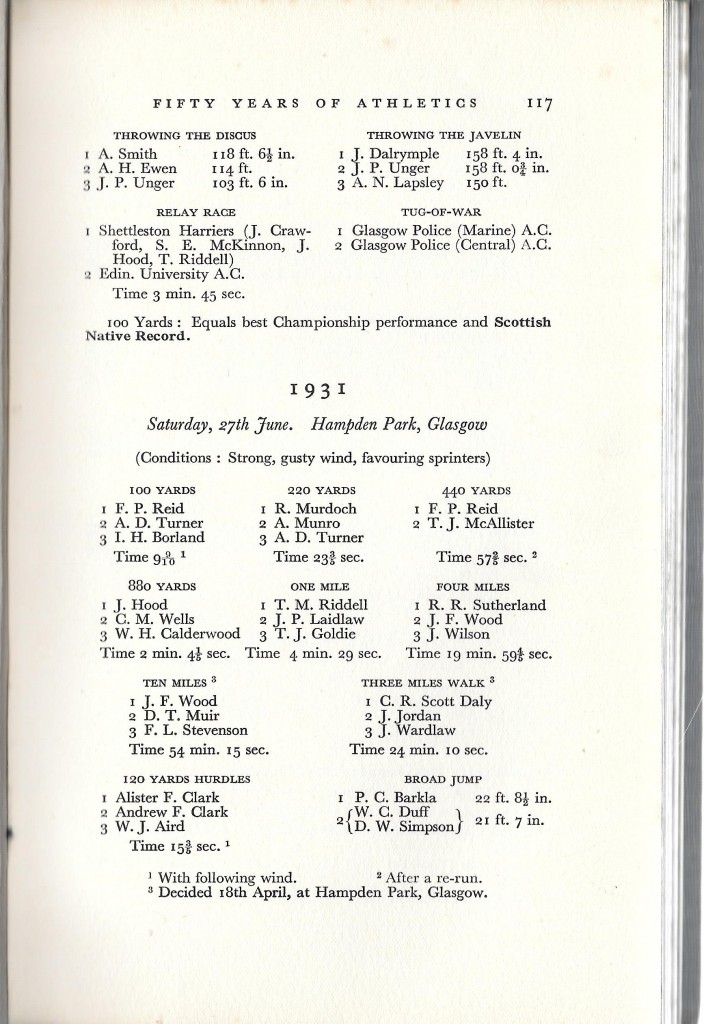 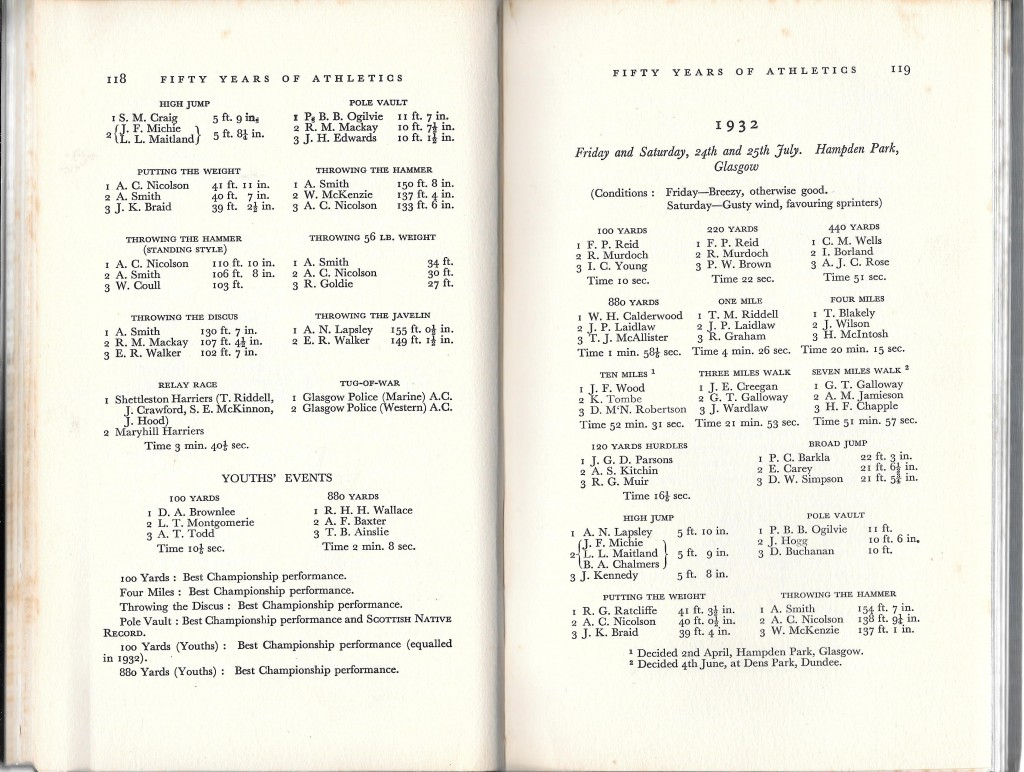 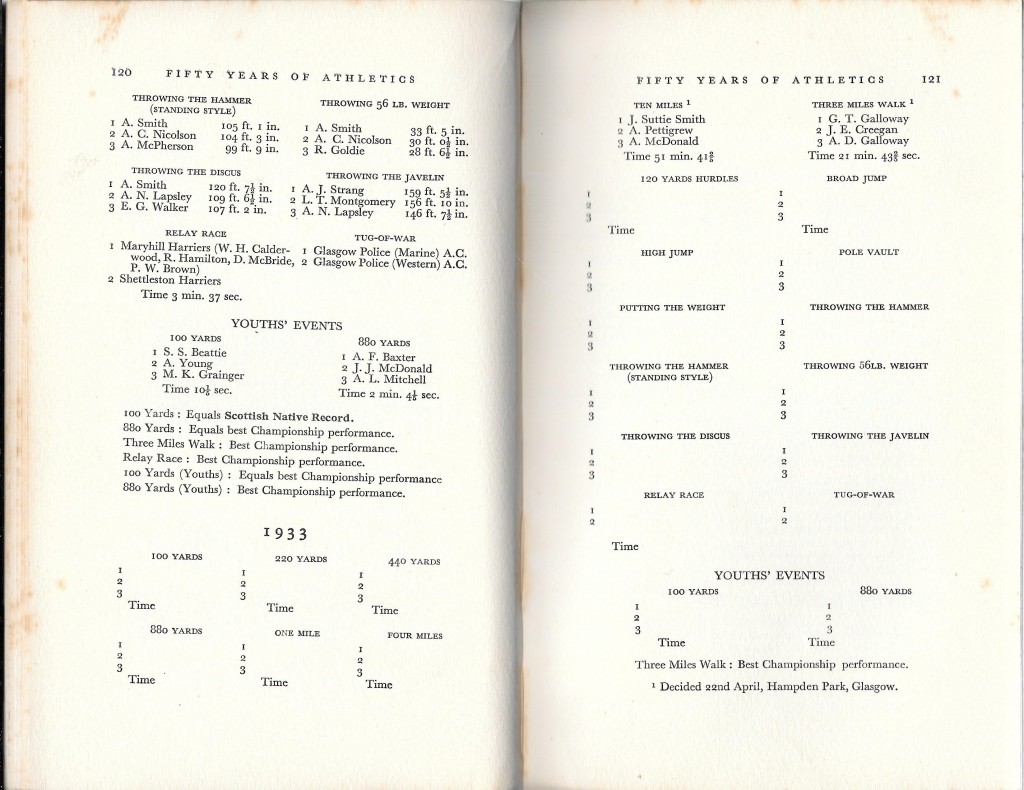