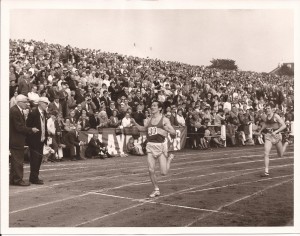 Lachie Stewart winning at Cowal in 1970 from Norman Morrison

When I came into the sport in the 1950’s most Games were professional but several of the top meetings were amateur and one of the best of those was the Cowal Games at Dunoon.    Our club was based in Clydebank and we always took a bus to the meeting – the obligatory stop at Arrochar was always welcome – to stretch the legs, to have a cuppa and to admire the wonderful scenery.   Then on to Dunoon.   There was always a sprint relay so the sprinters were there with their wives or girlfriends, we almost always had the invitation to the Two Miles team race so the distance men were there for that piece of the action with their better halves in tow.   The Two Mile race usually had four or five Scots teams plus one or at most two English teams.   Longwood (Derek Ibbotson’s team) and Saltwell (John Anderson and John Hillen’s team) were the usual English representation.   There was always a big crowd, the meeting ran over two days (Friday night and Saturday) with the usual events (100, 220, 440, 880 and Mile) on both days with runners running from the same handicap on both.    With a good handicap, many runners turned out twice to make the most of it.    Another attraction for the Two Miles was the fact that it was an invitation team race where expenses were paid.   The going rate for many years was £1:05:00 which came to a nice round £5:00 for the team.   Two wee stories – when Jim Brown, Ronnie McDonald and the Monkland team were there, I was queueing up with my form nicely filled in when I heard Jim ask for “£5  –  each!” and getting it, so it was back out, fill in another form for £20 and that was collected.   The problem then was with my conscience and whether the guys got the old rate while I made a bigger profit than usual or not!   In the end, I was honest.   On another occasion, I had taken two blank forms as I usually did just in case I made a mistake with one.   I approached a very merry Dunky Wright for him to countersign the form and he signed the top one, then slipped the second one down just far enough to show the dotted line at the bottom for his signature.   As he started signing I stopped him and said that it was just a blank form.   “Oh you missed a great chance there, Brian”, he said, “You could have put anything you liked on there!”   The official word on the Games site is as follows:

“The Cowal Highland Gathering held in Dunoon, Argyll, is the largest, most spectacular Highland games in the world. Nowhere else will you see world-class pipers, dancers and athletes competing on such a scale. It’s an unbeatable event for all the family. Just ask the 23,000 visitors who come here every year to soak up the unique, friendly atmosphere and stunning Highland location.

First held in 1894, the event is steeped in history. We celebrate this rich tradition, but we’ve added lots of new elements too. There really is something for everyone, from watching world championship competitions to running in the 5K fun run. The salute to the Chieftain is one of the highlights. As the sun sets down the Firth of Clyde, 3,000 pipers and drummers play ‘Highland Laddie’ in unison. It’s an unforgettable experience and a fitting end to this, the most spectacular of Highland games.”

The 5K run is a modern addition to the programme taking the place of the whole running programme despite the best efforts of Cammie Spence and others to retain them.   The whole day ends with the March of a Thousand Pipers over the hill from behind the last bend down onto the track before lining up en masse in the infield to make a wonderful sight.

A most enjoyable event and after the club stopped sending the bus along, we would take the train to Craigendoran at Helensburgh, take the ferry across to Dunoon and enjoy the return trip with a boatload of pipers, some of whom had enjoyed the post event celebrations a bit more than others.   We occasionally were entertained by a pie-eyed piper!   I remember one year when we were staying overnight at a friend’s cottage at Strone, we were watching the pipers march through the town with drinks being offered by watchers to pipers who were pleased to accept the tribute.

It was a wonderful feature of the Highland Games calendar.   There is an extract from the Cowal programme  at this link. 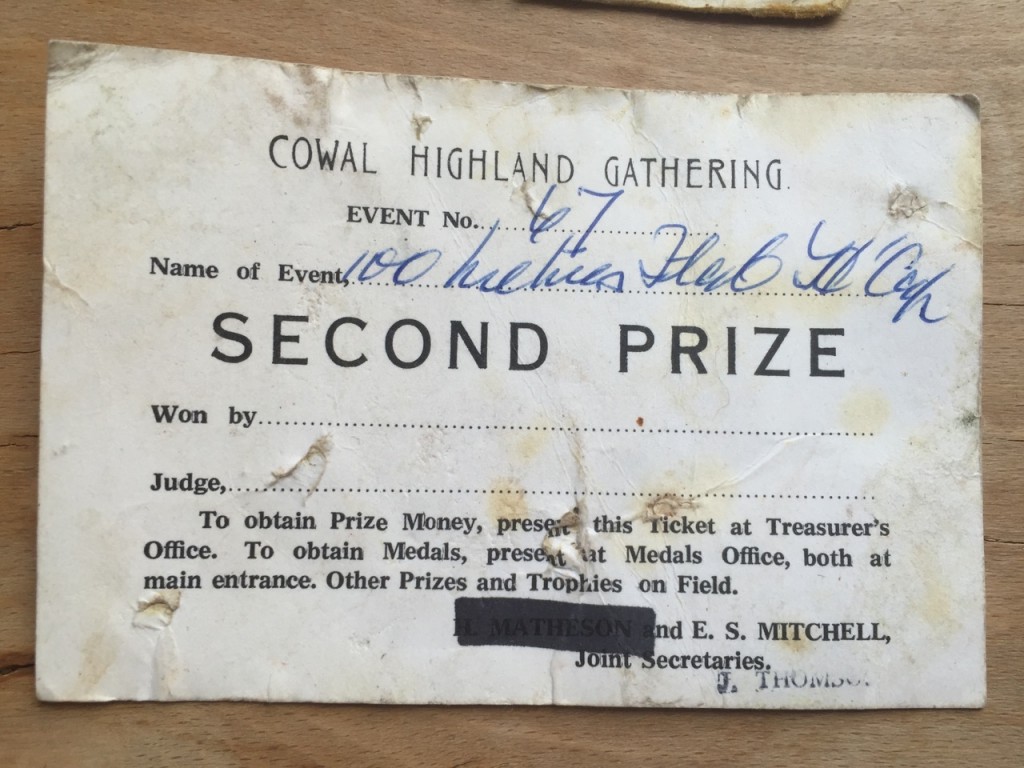 Alastair Shaw’s ‘ticket for finishing second in the 100.