The above picture is of the Clydesdale Harriers Opening Run which opened the Whiteinch Baths in Glasgow in 1989.

“Cross-country running in Scotland, as we know it today, began with a meeting which was held in Glasgow on May 4th, 1885, at which it was decided to form a club to be known as the ‘Clydesdale Harriers’.   Previously some of the Scottish public schools had held occasional ‘paper-chases’ but although there were plenty of athletes competing at sports meetings in the summer months, the winter months were allowed to pass in idleness, except by those who played football.   While waiting for the cross-country, the C.H. ran off several handicaps on the track at Kinning Park, the old ground of the Rangers FC.

The first cross-country run was held in Milngavie in September 1885.   On that occasion the ‘hares’ were very strong and covered a distance of thirteen miles, running for nearly two hours.   On 30th September 1885 the late DS Duncan called a meeting in Edinburgh at which the Edinburgh Harriers club was brought into being and in November 1885, an inter-club run was held at Coltbridge, Edinburgh.   During the winter of 1885, the Lanarkshire Bicycle Club and the Langside Bicycle Club formed harriers sections but they found the sport too strenuous and the sections faded out.   In December of that year the Edinburgh Harriers held the first cross-country handicap ever held in Scotland over a distance of four miles.   DS Duncan and WM Gabriel ran off scratch with a handicap limit of four minutes.

In February 1886, an inter-club between the Edinburgh Harriers and Clydesdale Harriers was held at Govan when a field of twenty seven runners took part!   At the convivial gathering which followed, DS Duncan made a strong appeal on behalf of the SAAA for further support for that body.

The first Scottish Cross-Country Championship was held on Lanark Racecourse.   It was a challenge match between the CH and the EH.   The venue was unsuitable for the CH, and out of fourteen nominations only four contested the race.   The EH had seven men forward.   AP Findlay (by far the oldest runner in the field) won from DS Duncan, who was at that time considered the best long distance athlete in Scotland.   Findlay was a stone-mason to trade, and a very hardy athlete.   When the news reached Ayr (his home town), preparations were made to greet him on the arrival of his train at 9:12 pm.   He did not turn up and a still larger crowd met the 11:20 pm train, but again there was no Findlay.   At 7:40 on the Sunday morning he arrived footsore and weary having walked from Barrhead to Kilmarnock to catch the mail train for Ayr.   He had no special preparation for the race which had been arranged only three weeks before it was run.   There are only two survivors of those who competed in this first championship – John Clelland of Larkhall and James Campbell of Helensburgh – both of whom ran in CH colours.

When Findlay won again in 1888 all the runners went off the trail, and Findlay was blamed (probably unjustly) for leading the field astray.   He could keep going indefinitely and the competitors ran about sixteen miles that day – some arriving back in cabs and other conveyances.   One or two had to have their shoes cut off in the main street of Ayr, and finished barefooted in the snow and slush and darkness.

In September 1886 the West of Scotland Harriers Club was formed, the membership of which at the beginning was mostly composed of cyclists and rowing men.

Outside of the three principal clubs – the CH, EH and WSH – the sport did not make much progress for the first couple of years, and it was only when the CH started to develop branches, or sections, in different parts of the country that it began to take hold.   Sections were formed in different towns in Dumbartonshire, Stirlingshire, Renfrewshire, Lanarkshire and Ayrshire, and these were carefully nursed by the parent body.   When the sections were strong enough to stand alone, they formed themselves into separate clubs and so the movement spread.   The pioneer work was very exacting, but the founders had great faith in the future of the sport, and the result justified their efforts.    It is of interest to mention that in the CH the whipper-in of the main pack carried a hunting horn slung over his shoulder and made appropriate noises with it during the course of the run.

Not till the season of 1887-88 did the real missionary work begin.   With the advent of Andrew Dick as Joint Secretary things began to hum.   When James Erskine took office in 1888 the CH membership had risen to about 200, and in 1900 it went up to 1000 paying members, who had the benefit of a private club-room in Dundas Street, Glasgow, where runners could meet at any time and get all the athletic and other newspapers as well as a manuscript magazine (monthly) run by Clydesdale’s own members.   There was in addition a gymnastic and boxing section, with premises at Garnethill.   Mr Erskine still takes a lively interest in the affairs of the sport.

The two chief protagonists of cross-country running in the early days were Andrew Dick in the West and DS Duncan in the East.   Another survivor of the first season, 1885-86, is TW Young (CH).   Although a sprinter of much ability on the track, Young seldom missed a run across country.

In season 1890-91 Andrew Hannah (CH) was champion.   He had a stern opponent in Wm Thomson (CH) of Larkhall, a well-known runner on the track.   ‘Big Wull’ was a forester for many years on the Hamilton Ducal Estates.   Popular wherever he went, he is now resident in Paisley.   Hannah is still hale and hearty and located in the city of St Mungo.

Missing a sequence of years we now come to that well known schoolmaster, Tom Jack (ESH) who won in 1907-08 and again in 1912.   Mr Jack is still very much to the fore, and now discharges his duties as Eastern District Handicapper with characteristic thoroughness.

The years 1922-3-4 brought out that wonderful distance runner, Duncan MacLeod Wright.   In 1922 he ran in the colours of the CH and in 1923 and 1924 in those of Shettleston Harriers.   He is however perhaps better known under the Maryhill colours.   Two of his greatest honours were the victories in the AAA Marathon (Windsor to Stamford Bridge), 1924, and the Empire Marathon Championship (1930), (Hamilton, Ontario).   One cannot overlook the brilliant performances of J Suttie Smith who was five times champion  in the sequence of years 1928 – 1932 inclusive.    Surely this will be a record that will be difficult to equal, let alone excel.

What is one to say of the present champion, only a novice of recent discovery?   JC Flockhart (Shettleston Harriers) has set the whole athletic universe talking.   To win the Midland, Junior and National Championships in one year is indeed something to be proud of.   Veterans predict a brilliant future for this youth, who like many of the veterans of the past, has raised the level of cross-country running in Scotland to an international standard.” 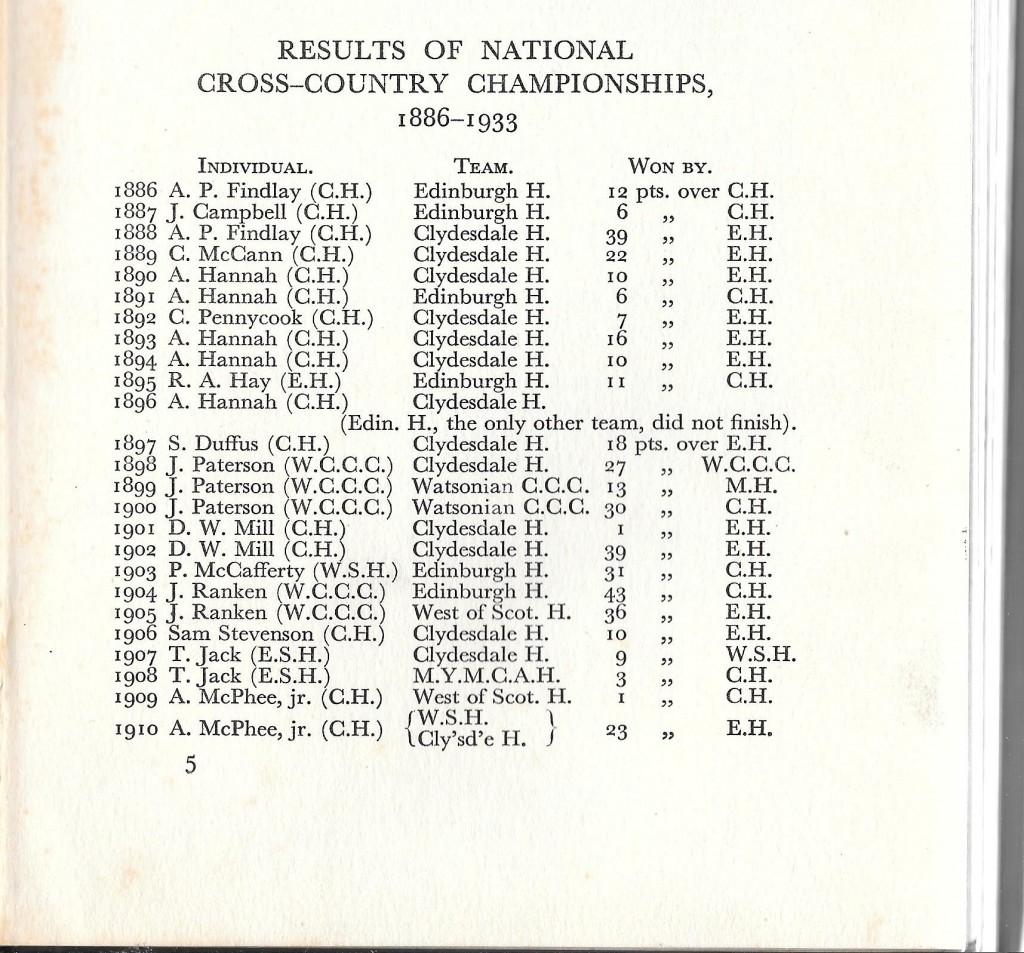 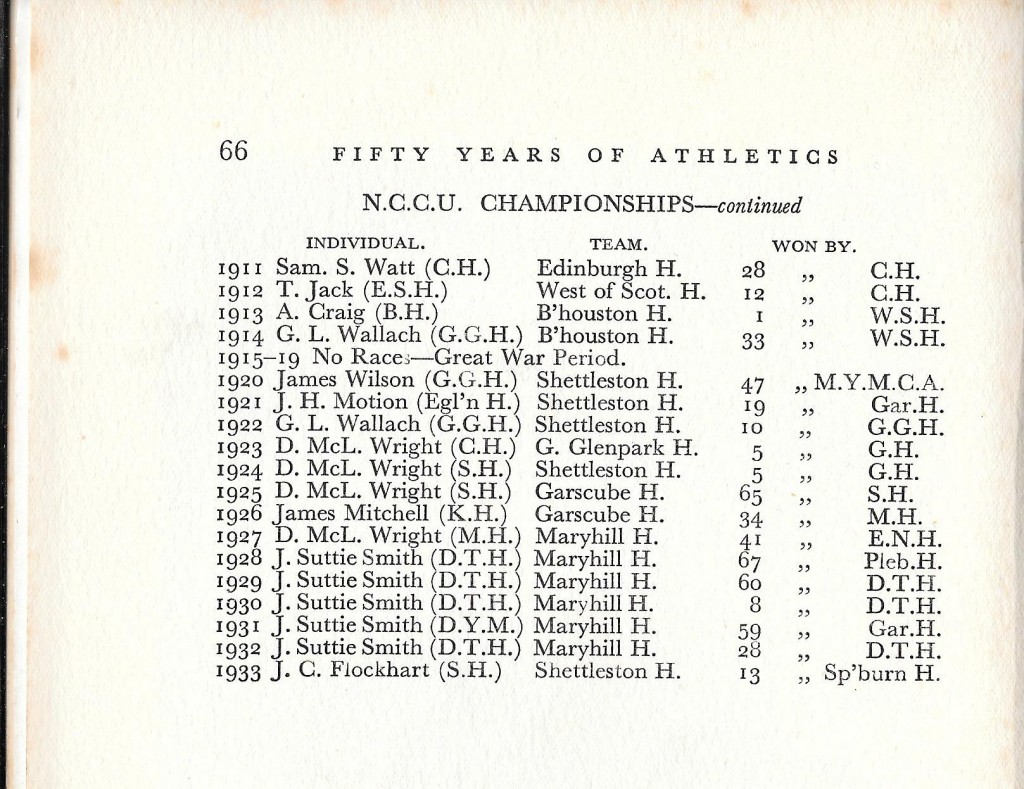